Q: You've mentioned Arcade a couple of times in your articles. I've always thought of him as a very ineffectual villain since, to my knowledge, his traps have never killed any heroes in the history of comics. This is a character I just can't take seriously. He's fought everyone, but he never seems like a credible threat. I'm interested in your perspective on him, since you seem to like him. -- E., via email

A: Like him? I'm not even close to kidding when I say that Arcade is one of my all-time favorite villains. I love that guy, to the point where I'm on board for pretty much any appearance he makes, no matter who draws it or what book it's in. Gambit and Wonder Man team up to take on Murderworld? I am there.

But you're right about his abysmal track record when it comes to actually getting the job done. The thing is, killing super-heroes is definitely not what makes a great villain.

In fact, when I tried to think of great villains who actually had managed to kill off super-heroes, I ended up pretty much drawing a blank. My first two thoughts were the Joker and Baron Zemo, but Jason Todd and Bucky Barnes didn't exactly stay dead -- though admittedly, they made a better go of it than most. Death in comics being what it is (or rather, what it isn't), the only one I can think of who actually managed to permanently off somebody was Black Mask, and of the two he managed to kill (Orpheus and... you know, what's-her-name, that blonde kid who was Batgirl for a hot minute), only one of them never made it back.

And really: If we're living in a world where Black Mask is the most credible villain in comics, then I don't even know what to believe anymore.

But really, the win / loss record doesn't matter. Villains, after all, aren't really made to succeed; if they were, they'd be protagonists. The villain is just there to provide an obstacle for a hero to overcome, and the best villains aren't the ones who rack up a massive body count, they're the ones who make the most interesting obstacles.

The great thing about the Joker, for instance, isn't that he kills people, it's that he does things in an interesting way that's fun to read about, and those "interesting things" just happen to occasionally involve mass murder. Anyone could write a story where the bad guy kills a bunch of people. It's as easy as typing "Villain X kills like four hundred dudes" onto a piece of paper, and it's just as easy to type "Hero A punches out Villain X because he's stronger than ten Gokus." The tricky part is making the reader care about all that stuff, and the only way to do that is to make the things they do interesting.

Remember that issue where Dr. Doom shot the Baxter Building into space? Nobody died in that comic, but it's one of the most memorable moments in the character's history, mostly because he was shooting an entire building into space. He'll always have that on his resumé, and if anyone ever needs to know a great Dr. Doom moment, that one's going to be up there with the time he invented time travel in order to steal Blackbeard's pirate treasure. It's an inherently interesting visual, and a compelling problem for the heroes to solve. He doesn't need to kill anyone to prove he's serious, because he's going for something bigger than that. In fact, whenever a villain actually is established on panel as a killer, it's usually done as shorthand to show how tough he is, rather than having any sort of meaning on its own.

To use another one of my favorites as an example, let's talk about the KGBeast. "Ten Nights of the Beast" is a four-issue story, and over the course of those four comics, the Beast kills something like a hundred and twenty people, blowing up airplanes, poisoning an entire banquet and even just straight up hacking people to death with an axe. It's certainly meant to establish him as a credible opponent for Batman, but it's not what really makes the story, or the character. The moment that you know that the Beast is a serious customer isn't when he's killing someone else, but when he chops off his own hand (which, incidentally, was completely unnecessary) rather than being taken in by Batman. It shows the extremes to which he's willing to go far better than the scenes where he hacks his way through a nameless extra.

I admit that I'd be lying if I said that the crazy amount of murder he pulls off in that story wasn't one of the reasons I liked the character so much, but it's less that he was killing them and more that he's killing a ridiculous number of people, while also wearing a luchador mask and a singlet with an ab window. It all just contributes to how over-the-top he is, and despite Starlin and Aparo's best efforts at making him scary, that action movie murder spree that he goes on always hit me as more "funny" than "genuinely threatening."

At the same time, I definitely understand your desire for a credible threat. We need to believe that the heroes are in danger in order to become invested in the story, and when a bad guy repeatedly fails, it does undermine the drama. It's actually addressed in one of the more recent Arcade stories, Paul Tobin and David Baldeon's Avengers Academy Giant-Size #1:

Comics have a tendency to go for grandeur, on both sides of the story. You get taglines called "The Earth's Mightiest Heroes" or "The World's Greatest Detective," and in order for the characters to live up to that kind of hype, they need to face enemies that are, at least in theory, able to challenge them on that level. We all know that a regular assassin won't present a challenge to Batman or Captain America, so instead, we're told that they're fighting "the world's deadliest assassin" or "the most lethal martial artist alive." And then said the villains lose -- or, on a good day, they just don't win -- and now the one thing that defines them is diminished.

Arcade's as much a victim of that as anyone else. When he's introduced, it's as an assassin who commands a million dollars per kill, and that's in 1978 dollars. So when he consistently fails to do so, even with assurances that Murderworld is killing enough people off-panel to keep him financially solvent, he does lose a little something. The story that we're told doesn't match up with the story we're actually reading. It's one of the reasons that, as much as I love the character, I'm actually perfectly fine when he doesn't show up all that often. If a villain is a constant presence, then he's usually a constant loser. They need to recharge to keep that illusion of being a threat.

But in the end, the success is far less important than the style, and that finally brings me back around to why I like him so much. Part of it is that he's one of the first super-villains I ever read a comic about when I was a kid, thanks to a paperback reprint of Chris Claremont and John Byrne's Uncanny X-Men #123 and #124. 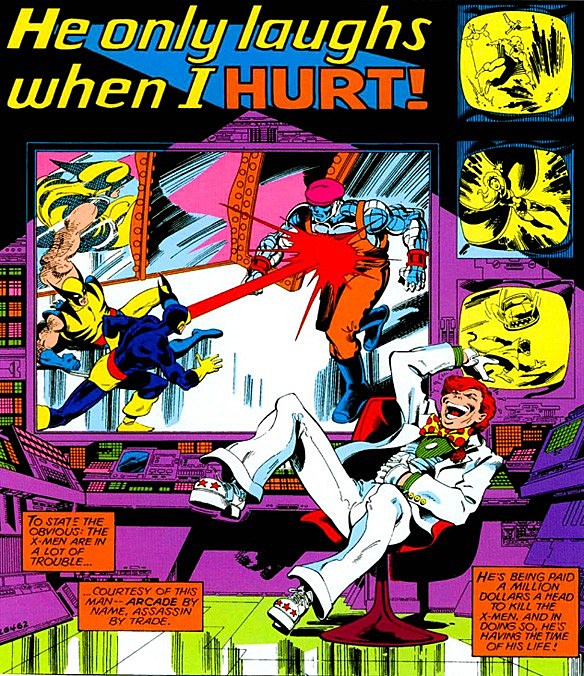 This is still one of my all-time favorite X-Men stories, and the panel above really captures it all: The bizarre deathtraps that the team was facing -- including Colossus being brainwashed into dressing like Soviet Super Mario -- punctuated by a dude who is laughing his ass off at how silly it is. Just the fact that Arcade is a guy who doesn't hate his enemies, and isn't grimly determined to carry out the contract for murder, but that he's mostly just doing it because it's fun. Which it is.

And then there's Murderworld itself, the Theme Park of Death, which is just genius. Like a lot of the things I love in comics, it's brilliantly adaptable. It makes perfect sense for it to be different every time you see it, and because it's already based on amusement parks, and since they tend to have rides based on any theme you can imagine, you can design a deathtrap around anything, and it will still make perfect sense. Plus, Arcade's detachment from a personal vendetta against the heroes means that he's one of those characters who can show up anywhere, at any time, to fight anyone.

That helps mediate the importance of his losses, too. Since he's themed around games and a crooked sense of sportsmanship, his characterization lends itself pretty well to taking his inevitable defeat in stride. For Arcade, whether or not the fight is interesting is far more important than the outcome.

And in that respect, he's a lot like the reader.

Filed Under: Arcade, Ask Chris, AskChris, Supervillains, X-Men
Categories: Ask Chris, Opinion
Comments
Leave A Comment
Hugh Jackman Hints at Possible Return as Wolverine
‘WandaVision’ Creator Reveals Why Evan Peters Played Pietro
Every Marvel Movie Ever Made, Ranked From Worst to Best
‘WandaVision’ Showrunner Reveals Why They Recast THAT Character
Viggo Mortensen Reveals Why He Turned Down the Role of Wolverine
Hugh Jackman’s ‘Days of Future Past’ Butt Is Uncensored on Disney+
Hasbro Is Making the Biggest X-Men Toy Ever
Rob Liefeld Says There Is ‘No Movement’ on ‘Deadpool 3’ at Marvel
Long-Delayed ‘New Mutants’ Movie Has (Another) New Release Date