Q: What is/are your favorite Superman origin stories and why? -- @deantrippe

Back when we were both working at a comic book store, my pal Chad Bowers and I made a list of things that we never, ever needed to see again in comics, and right at the top, outranking even "A Spider-Man story with the words 'power' and 'responsibility' in the title" was another origin story for Superman. And keep in mind: This was before Birthright, Secret Origin and Earth One.

On one level, I can completely understand why it's such an attractive concept for creators to revisit over and over and over again, but on another level, stop it. Once you get to a certain point, continually revisiting a character's beginning doesn't add anything, it just drags things backwards and devolves into confusing published bickering over which stuff counts this time. To take it back to my days at the shop, it's essentially the comics industry's version of four guys showing up to a D&D game night with four different sourcebooks and trying to shout each other down with why THAC0 is better than Base Attack Bonus and never actually getting around to the adventure, and it has about as much to do with telling a good story.But there are a couple of Superman origins that I absolutely love, and my all-time favorite probably won't surprise anyone. Here it is in its entirety, from page 1 of Grant Morrison and Frank Quitely's All Star Superman: 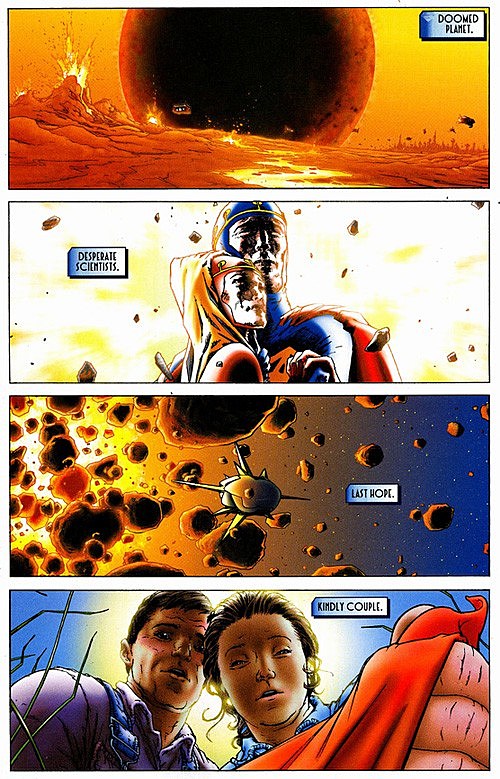 Not only is this a one-page master class in economic storytelling, but it is quite literally everything you need to know about where Superman comes from. It's not just that Morrison and Quitely are able to boil it down to four panels and eight words, but that those specific panels are all it takes to get across the entire reason why Superman does what he does.

Despite the fact that I'm a guy known for dropping 4,000-word essays on the importance of the utility belt in the modern heroic mythos, I'm a pretty big fan of brevity in situations like this, for one simple reason: Every page about why Superman does stuff he does is a page where Superman's not actually doing it. And that's fine up to a certain point, but once the basics are established, it's time to move on to some actual heroism.

And again, that's all you need to know. I've said before that any story that focuses on Jor-El and his relationship with Superman -- lookin' at you here, Smallville -- has successfully missed the point of both characters. Jor-El is not a motivating factor for Superman in the way that Thomas Wayne and Uncle Ben are motivating factors for Batman and Spider-Man, respectively. He's a desperate scientist who put his last hope in a rocket rather than see him perish on a doomed planet.

That is the sum total of his character, exactly one action (putting the baby in the rocket) that gives Superman a) a reason to have super-powers, b) characterizes him as an alien who will be accepted by Earth and c) casts him as someone who represents capital-H Hope from the moment he escapes the death of Krypton. That's it. There's no further relationship between the two characters once the baby goes in the rocket; the father/son relationship of the Superman story comes from Jonathan Kent, one half of the kindly couple that raises him on Earth.

The fact that all this can be conveyed in such sparse terms is one of the real strengths of Superman's origin. It's like Robin Hood: The crusades and the ransom of King Richard and the politics of land ownership in England in the 1300s and the fact that Maid Marian was only his girlfriend after a sixteenth-century retcon are certainly interesting, but all you really need to know about that guy to get started on his adventures is robs from the rich, gives to the poor. Eight words, folks.

But again, that stuff is interesting -- most of it anyway -- and like I said, there are long-form Superman origins that I like a lot: John Byrne's Man of Steel. 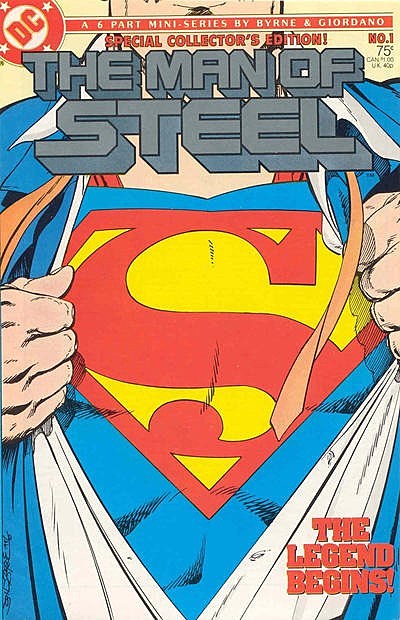 My affection for Man of Steel probably doesn't come as a surprise, as it was the origin I grew up with, but I really think it does certain things better than any other version, specifically in the first issue.

For one, Byrne makes Krypton itself a very cold, sterile place, "stripped of all human feeling." I have to assume that this was a direct reaction to the way Krypton was portrayed in the Silver Age, as a paradise where pretty much everyone was just as great as Superman. And it's a very important distinction.

I've mentioned before that for Batman's origin, Bruce Wayne's childhood should be absolutely idyllic in order to heighten the motivating tragedy of his parents' murder. For Superman, however, it's the reverse: Life on Krypton shouldn't be something Clark Kent should ever aspire to -- the definitive factor for him isn't where he was born, but rather the guidance he gets from the Kents and, by extension, the acceptance of Earth. He's embraced by his adopted home, and it's that act that makes him its protector. Krypton just doesn't matter.

So instead, Byrne uses Krypton to illustrate just what's so great about Earth: That we are nothing but emotions and life that's worth protecting: 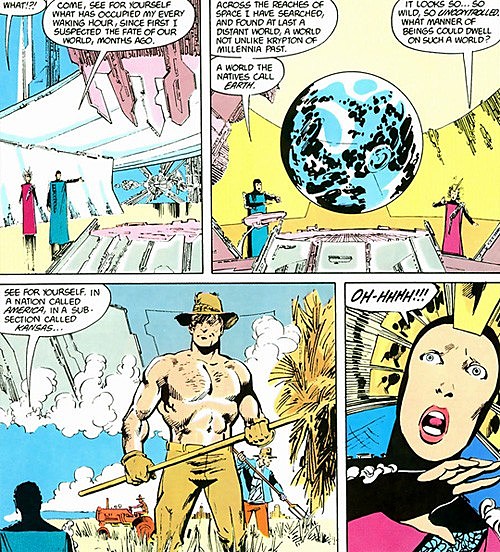 It's also worth noting that after Jor-El puts the baby in the rocket -- and becomes the first Kryptonian in "a hundred centuries" to actually tell his wife that he loves her, a great way to cast Superman himself as an actual product of love rather than the planet's cold science -- he's pretty much done. He shows up a few times again as a hologram, but only so that Superman can say "I come from the planet Krypton" and not "I come from, I dunno, a crater out in the East 40. I guess maybe space?"

And that's not the only great moment in Man of Steel #1, either. It really is Byrne at his best, and while Superman's reaction to the way the crowd treated him is certainly a product of the storytelling styles that were prominent in the '80s... 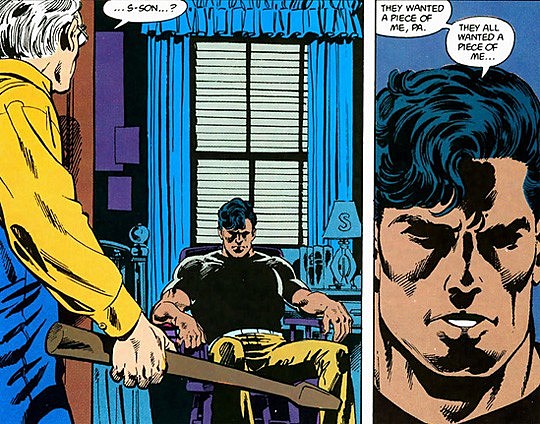 ...it's not only still pretty relevant today, but also does a lot to draw the distinction between Byrne's Superman, who needs to be Clark Kent and who is truly human at heart, and the Superman of the Silver Age, who really didn't have much reason to dress up as a reporter and go to work.

The best bit, though, is the fact that Superman's S is just an S.

But for some reason, creators feel the need to fix what was never broken to begin with. Given Superman's importance as a symbol, I can understand the desire to try to add significance to it as a Kryptonian crest or whatever, but that is both needlessly complex and ignores the fact that the reason this symbol means something is that Superman wears it, not the other way around. The symbol doesn't need to mean anything beyond "Superman," because Superman makes it mean something. In Earth One, however, J. Michael Straczynski goes in the opposite direction and strips it of all meaning by having it be something Pa Kent came up with after talking to an advertising executive in a calculated attempt to brand his son, and that might just end up being the absolute worst part of that piece of garbage.

Again, simplicity's the key. There's nothing wrong with having a detailed origin story -- I don't think you'll find anyone who doubts that I think Batman: Year One is a damn fine comic book -- but when there are so many that all have different details, each steadfastly refusing to admit that the others exist, a lot of the appeal's going to rest with who manages to cut it down to the things that really matter.

And now, a few quick answers!

Q: Would you like to see Spider-Man's Girlfriend Carlie Cooper or Norah Winters: Girl Reporter back-ups? I would. -- @VJ_Dacak

A: You know, traditionally I provide the answers, you don't have to add them yourself. But yes, I'd totally read that, although I'd be way more interested in a Carlie Cooper story, as a Roller Derby crime scene investigator in the Marvel Universe would be print gold.

Q: Best comic character with the word "dead" in their name. -- @adamtool

Q: What would you put in a cocktail called the "Emma Frost"? -- @metrokitty

A: What do you put in an Emma Frost? Scott Summers!

Really though, I'm always up for a comics-themed cocktail, but Emma presents a little problem. It ought to be clear and sparkly, so I'd go with vanilla vodka, Sprite, and a splash of Key Lime juice, because if there's one thing Emma Frost needs to be, it's tart. Served on the rocks, of course.