A: Considering that I worked the counter at a comic book store for six years, I've settled more than my fair share of this type of question, since arguing about who would win in a fight is the #2 national pastime for nerds, right behind complaining about things that no force on Earth could stop them from buying. To be honest, it can a little tiresome sometimes, but you have appealed to me as both a Batmanologist and a Harry Potter fan. So if I don't answer this one, who will?

Except for every literally single person on Fanfiction.net, I mean. 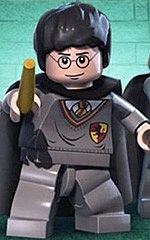 For starters, though, I have to say that you're way off-base in your assessment of Harry. The characterization of him as a "whiny brat" is one that I see cropping up all over the place, and it's a complete misreading of the character. Yes, he can be moody and petulant, but he's a teenager. And let's be real here: If you weren't moody and petulant when you were a teenager, then thanks for reading ComicsAlliance, Your Holiness the Dalai Lama.

Also, it's worth noting that Harry's got some stuff going on that significantly exacerbates his problem. Think about what you were griping about when you were in high school, and the events that led you to declare that only [The Smiths/The Cure/Nirvana/Violent J] understood what you were going through. Now think about how well you would've handled it if there was ACTUALLY A DUDE WHO WANTED TO MURDER YOU AND COULD DO SO BY POINTING AT YOU WITH A STICK. And also he has an entire army of people who know where you sleep. And at one point he secretly controls the government.

I'll give you that he's a privileged jock who is allowed to do whatever he wants because he's the ultimate teacher's pet and anyone who even makes the slightest attempt to get him to abide by the rules is immediately categorized as a villain, but "whiny brat?" All things considered, Harry does better than most people would've just by being willing to get out of bed in the morning. 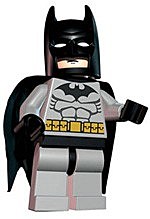 You've also set up a false equivalence in their origin stories. They seem to have the primary factor in common on the surface -- wealthy parents murdered by a criminal -- but being orphaned is such a prerequisite for becoming a protagonist that it barely even counts when figuring out what heroes have in common. I've written about this before, but one of the most important factors in Batman's origin isn't just that his parents are killed, but that that the very concepts of comfort and safety that he's known for his entire life are taken away from him in one brutal moment. The fact that he's old enough to comprehend that but still young enough to believe that the proper response is to grow up into something that can change the world by sheer force of will is a crucial element of how and why he works.

Harry, on the other hand, doesn't have that. His parents are killed when he's an infant, so he has only vague memories of them, and until Hagrid shows up to cart him off to Hogwarts when he's 11, he has no reason at all to swear vengeance since he thinks they died in a car crash. As a result, the absolute misery of his upbringing with the Dursleys gives him a completely different idea of "home" and "safety" than what young Bruce Wayne grows up with. Even when his surrogate parent Sirius dies later on, he's not motivated by what he's lost, but rather the knowledge that he never had something. It's close, but there's a difference, and it comes from the fact that he formed his entire concept of what the world is while three people who absolutely hated him kept him so far down he didn't even know what up was.

But that in itself points to a major difference between the two characters: Harry just takes it, and does absolutely nothing to improve his own situation. Now admittedly, he's a kid, and there's a metaphorical significance to both stories that as children, they're powerless to stop bad things from happening to them. But at the same time, the end result is that Harry's origin is a very passive one. He sits in the cupboard under the stairs for a decade after his parents' murder and it's only through someone else's actions -- the arrival of the letter from Hogwarts -- that things change. This, by the way, is another key difference: While Voldemort murdering his parents is a crucial act in the story that sets things in motion for everything around him, the defining change of Harry's life is the day he finds out he's a wizard.

But still, the passivity is there from the start. It's a fact of storytelling that heroes tend to be reactive rather than proactive, as the villain always has to be the one to make the first move. Without Prince John and the Sheriff oppressing the people of Nottingham, Robin Hood's just a weird dude who lives in the woods.

For Harry, however, this problem is writ large. He very rarely acts without being led or forced into it by outside forces, whether it's Dumbledore giving him a nudge in the right direction (the climax of Prisoner of Azkaban), enemies setting him up (the entirety of Goblet of Fire), manipulation from Voldemort (the trip to the ministry in Order of the Phoenix). Even the big adventure of Deathly Hallows isn't just set into motion by Dumbledore's will, but Dumbledore himself has to come back from the dead to give him a pep talk and set him on the path to victory. Even the formation of Dumbledore's Army is originally Hermione's idea, and it's Neville who keeps it going as the Hogwarts Liberation Front. 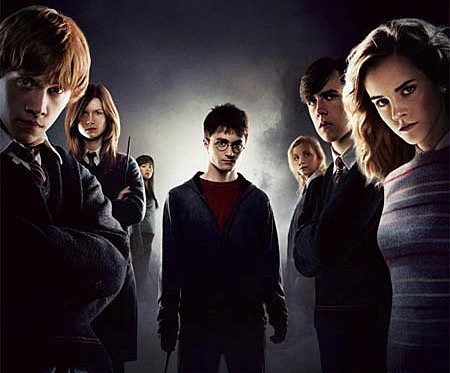 That's by no means a flaw of the Harry Potter books. It's quite the contrary: the depth of the supporting cast is one of the book's best features, and if anything, the fact that Harry is essentially swept up in a conflict between two other guys -- Dumbledore and Voldemort -- that's largely beyond his understanding makes him a much more relatable character than someone like Ron Weasley, for whom the bizarre is completely normal. The Wizarding World needs to be overwhelming for Harry, because it needs to be overwhelming and tantalizing and bigger than life for the readers who are meant to identify with him. His strength lies in resilience, conviction and the power of believing in what's right and being willing to fight for it when it comes down. But the flipside to that is that things happen to Harry.

Batman, meanwhile, is anything but passive. He knows eactly what he's going to do from the moment his parents get shot, and as far as I'm concerned, he's got Alfred on the phone with karate schools the next day. He's often in the same reactive situation as Harry, but the difference is that he's as much of a scheming mastermind as his villains, just working for the side of good. Even when he's not actively out on the streets punching out the Joker, he's always fighting crime, whether through preparation or by making proactive moves like the recent founding Batman Inc. so that the Batman can be everywhere. 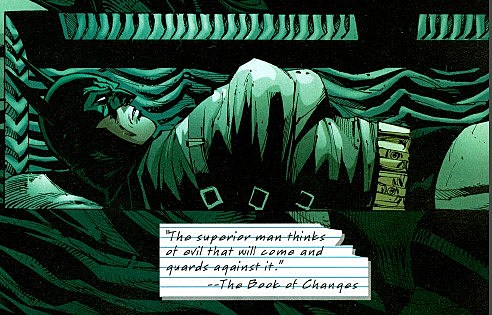 For Batman, the victory is in the preparation, and over time, that's become one of the aspects that defines Batman as a character, and in a broader sense defined his literary ancestors like Sherlock Holmes, who always had the piece of knowledge and the skill at observation to solve whatever problem presents itself.

It also leads to one of the most frequent misreadings of Batman, especially with regards to Mark Waid and Howard Porter's Tower of Babel storyline, where Batman is revealed to have been keeping files on how to take down the rest of the JLA. That's not Batman being a jerk, and it's not even really Batman figuring out how to take out his friends if he needs to. That's Batman being a character who lives in a world where having to fight off an evil version of the JLA from another dimension or a worm from space who can control minds or a disembodied spirit that can possess Superman is a very real problem that happens about once every three months, and having to figure out a way to deal with it. It's dedication to the necessity of staying a step ahead of evil no matter what form it takes. If you engage Batman, then you've already lost.

By constrast, Harry succeeds through the (equally valid) mixture of luck, determination, and the help of his friends. He gets more on top of things by the end of the series, but for most of it he does absolutely zero preparation other than just learning stuff in school, and even there, he's not really one to apply himself. It's underscored in Goblet of Fire, when he puts off figuring out the Second Task until the last minute, and his achievements in all three are directed by an outside source.

Of course, it's also worth noting that Goblet of Fire is a book that does feature a character who advises constant vigilance and preparation -- no matter how unpleasant -- against one's enemies, and that he spends the entire book beaten up, naked and imprisoned in a trunk. Clearly, we have JK Rowling's opinion on the matter.

Taking all that into consideration, there's really no doubt in my mind of how a fight between the two would end. 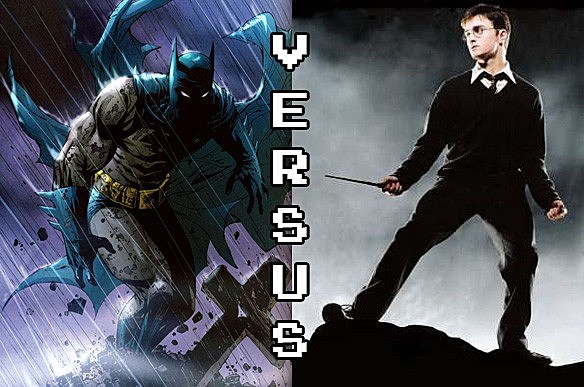 There's one crucial element at play that decides this thing faster than anything else, and it's very simple: Harry Potter uses a wand.

Assuming the characters know the bare minimum of information about each other -- Batman knows Harry's a wizard, Harry knows that despite appearances, Batman's not some sort of ninja Dementor so that he doesn't waste time trying to take him down with Expecto Patronum -- then the only question is whether Harry Potter can say three syllables in Fake Latin and manage to hit a moving target used to dodging gunfire with a Stunning Spell before Batman disarms him from thirty feet away with a piece of metal shaped like his own logo.

There is no possible way that this happens. Not on Harry's best day, not on Batman's worst.

And that's pretty much that. You take away Batman's utility belt and he's still Batman. He's still one of the world's greatest martial artists and tactical thinkers with years of experience fighting different opponents. Take away Harry's wand and he's a nearsighted high school student with really good reflexes. Sorry, Harry.

Admittedly, there is a scene in Identity Crisis where Zatanna's able to get a spell off on Batman before he can throw the Batarang, but a) she doesn't have to aim, and b) if you're basing an argument on the events of Identity Crisis, then we both know you've already lost.

Of course, the real end result of all this is that the second Batman hears there's an extremely pale dude with a high, cruel laugh going around offing people's parents, he and Harry would of course team up to throw the Death Eaters back in Azkaban Asylum.