Q: Which casualty of the original Suicide Squad run do you feel was done best? -- @MikeTubbington

A: For those of you who have never read Suicide Squad, one of the hooks to the book was that in order to live up to the name, a character was killed off in every story arc. As a result, over the title's five-year run, they were able to rack up a number of dead teammates that almost managed to rival an average semester at Professor Xavier's School for Gifted Youngsters.

Seriously, I'd take my chances with the world that hates and fears me. 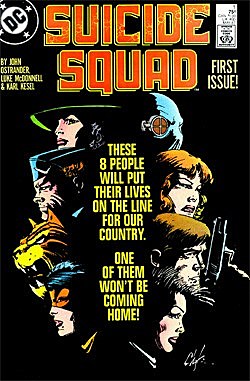 With Suicide Squad, it's not quite as gruesome as it might sound. The original premise of the book was that super-criminals could work off their debt to society by going on suicide missions for the government. As super-villains are one of the DC Universe's most prominent renewable resources, and since Suicide Squad debuted in that sweet spot just after Crisis on Infinite Earths had restructured the universe, there were 40 years worth of one-shot bad guys and goofy Silver Age goons for the creators to choose from.

As a result, there was a built-in revolving door to the cast. A very small group of characters stuck around (including Deadshot, who was redefined in Suicide Squad to be one of DC's most compelling villains) while other characters came and went, and some of them went permanently. Or at least as permanent as things get in super-hero comics, but I'll get back to that in a minute.

It's easy to think that a setup like that would lead to predictable storytelling and a lack of connection with the characters who died, but writer John Ostrander and artists like long-time Squad mainstay Luke McDonnell pulled it off beautifully. Not only did it work, but they created a real sense of danger and tension, making it feel like there was no one in the book who was "safe."

Admittedly, there was a lot of that attitude that was a product of the time and the events surrounding the book. It flowed pretty naturally from the fact that they were working with the expendable characters on the lower tiers of DC's recently expanded catalog. After all, this was 1987, who cared if Deadshot or Captain Boomerang got killed? Hell, DC just killed off The Flash a year ago, and these were goofy Silver Age bad guys with garish costumes and dumb powers!

Ostrander's scripts played on that attitude masterfully. For one thing, the guy in the bright red, yellow and silver costume with a target on his chest (an awesome design, by the way) who made his second appearance 30 years after his first one by burning his way out of a prison cell with a laser monocle (really) became the closest thing DC had to Wolverine, only steeped even further in amorality and defined by a death wish -- something you pretty much have to have if you're going to point a gun at Batman. But beyond that was the fact that it resulted in some pretty memorable deaths.

There are two in particular that stick out as the highlights of the book, and one of them is the most obvious choice possible: Colonel Rick Flag, who died in Suicide Squad #26. 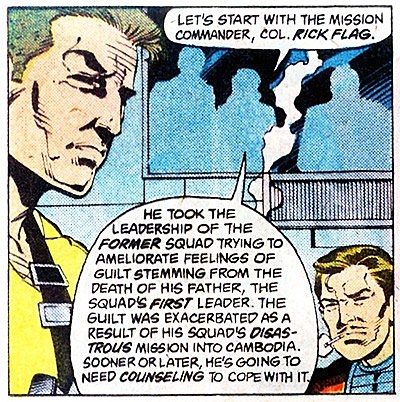 Suicide Squad was a great book for its entire 66-issue run, but those first two years are absolutely phenomenal. It all comes down to the emotional core that the creators were able to build in those stories, and a key part of that was the dynamic between Rick Flag and Amanda Waller.

Flag was a holdover from the original original Suicide Squad of the late '50s, when Task Force X was a quartet of military operatives who went around dealing with abominable snowmen. Under Ostrander, though, Flag was given a depth that saw him burdened by survivor's guilt from the death of his former teammates and his father's similar fate on the Task Force X of World War II. Where Waller was utterly ruthless in pursuing her goals no matter what the cost, wiling to sacrifice members of the team and occasionally even kill them herself, Flag was a deeply moral man shackled by his feelings of guilt and duty.

He was assigned to be the Squad's field commander -- because after all, even with the threat of bombs that would blow their arms off if they didn't cooperate, it's not a great idea to let arch-criminals run around unsupervised -- and there's the palpable feeling that he hated every second of it. He hated working within the moral gray area of furthering Waller's goals while she battled politicians for control of the squad, and most of all, he hated having to deal with the unrepentant criminals under his charge: 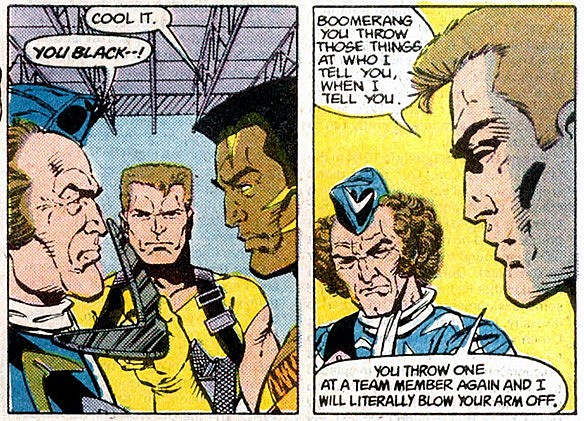 But at the same time, there was no way that he could not do it. It was his duty, and for Rick Flag, duty trumps everything. Over the course of the first 25 issues, we're shown how Flag has sacrificed everything, from his relationship to the woman he loves to his own personal morality, in the name of following his duty to the best of his ability. He's assigned to the Squad, and despite wanting nothing more than to be out of it, his loyalty remains there.

There's a great illustration of that idea when the Suicide Squad tangles with the Justice League, and Flag ends up facing off against another guy who knows a few things about sacrifice in the name of duty: 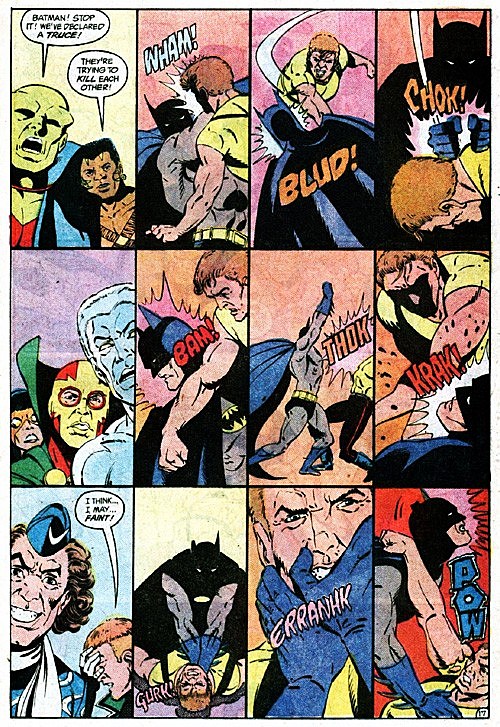 As you might expect, Batman is pretty fundamentally opposed to the idea of making murderous criminals do the dirty work of the government and then letting them back out on the streets, but here's the thing: Flag is too. The difference is that Batman owes loyalty to no one other than himself, while Flag feels he has no choice but to serve the role he's given. At the end of the issue, Batman quits the Justice League rather than compromise himself, while Flag bitterly resigns himself to being part of the Suicide Squad. 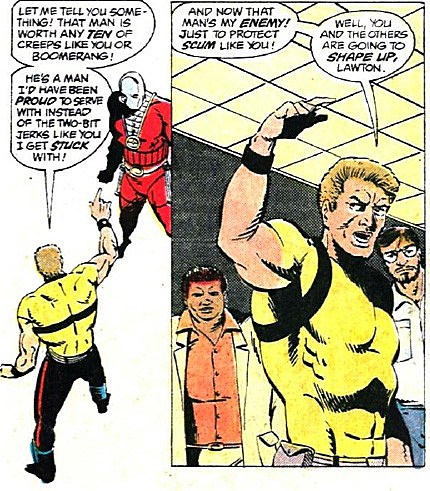 The bitterness, resentment and guilt just keep building as the issues go by, with Flag going more and more unstable, becoming a tragic figure who suffers because it's against his nature to turn away from the path he's made for himself. He allows his feelings of duty to completely overtake him -- his loyalty to the Squad even leads him to murder government officials that are trying to blackmail Waller -- until, in Suicide Squad #21, we get this scene: 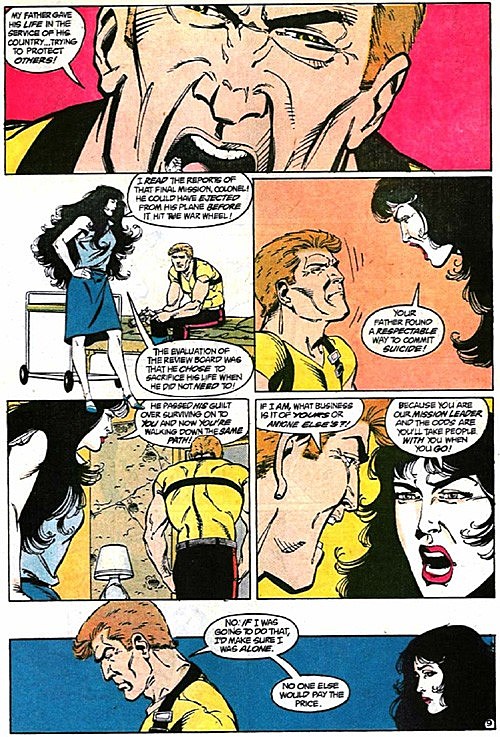 From that moment, it's only a matter of time, and sure enough, just like his father, he eventually finds his own elaborate way of killing himself.

The method he chooses is a pretty incredible action set piece, too. Over the first two years of the Suicide Squad, they fight a super-powered terrorist group called the Jihad, starting in #1 and clashing again a few other times. As it turns out, the Jihad is headquartered in an impenetrable desert fortress built by the Nazis in World War II, but what they don't know -- and more importantly, what Flag does -- is that the fortress also contains a prototype atomic bomb.

So in order to put an end to the Squad's enemies, he goes there and sets it off.

Thus, he fulfills what he sees as his duty and ends it once and for all.

Sort of. Super-hero comics being what they are, Flag didn't die, but -- as revealed 20 years later in the appropriately named Suicide Squad: From the Ashes, by Ostrander and Javier Pina -- it's revealed that Flag survived the blast when his nemesis, Rustam, used his magic scimitar to open a portal to Skartaris, the world of sorcery and dinosaurs from DC's Warlord. Comics, everybody!

Really, though, it's actually a very good story, and playing with those crazy comic book elements is one of the very things that made Squad a great DC Universe title. Ostrander's incredibly adept at turning those strange pieces into things that he can build that emotional content with, and this is no exception. The rest of From the Ashes is, on the surface, about Flag discovering that he's been conditioned to obey the orders of the evil General Eiling and eventually breaking free, but the subtext is that he's found a way to overcome his own inability to choose the right path for himself.

Maybe it's because there was a massive gap between those stories (and 40 more issues of Suicide Squad between them), but it's a redemption of the character that manages to not cheapen what his original "death" accomplished.

As for my other favorite death in Suicide Squad, that one's just as obvious: Grant Morrison.

Yes, that Grant Morrison. The one currently writing Superman stories in Action Comics. As most of his fans are already aware, Morrison's run on Animal Man ends with the title character breaking right through the Fourth Wall and having a conversation about imaginary foxes with an extremely pale version of Morrison himself. It's a groundbreaking issue, but one of the unintended consequences of it is that, if you want to get technical about it, it makes Grant Morrison a DC Comics character. 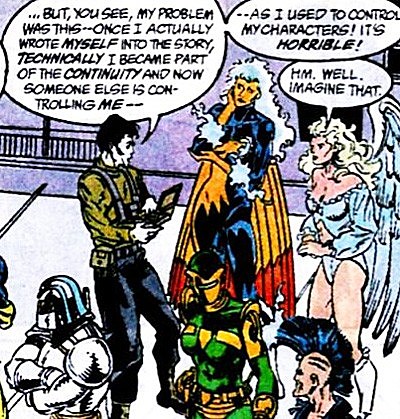 Of all the amazing things about Ostrander, Kim Yale and Geof Isherwood putting Morrison the Character in their comic, I think Firehawk and Silver Swan being bored out of their minds by his sob story is my favorite. That's one of the great things about this book: For all its pathos and legitimate grimness, it's also really funny.

Anyway, what with the fact that he's a comic book writer with the ability to control the "reality" of the story by typing in that word processor that he's lugging around, you'd think Morrison would've had an easy time of it. Unfortunately, he's brought down by something I can definitely sympathize with: 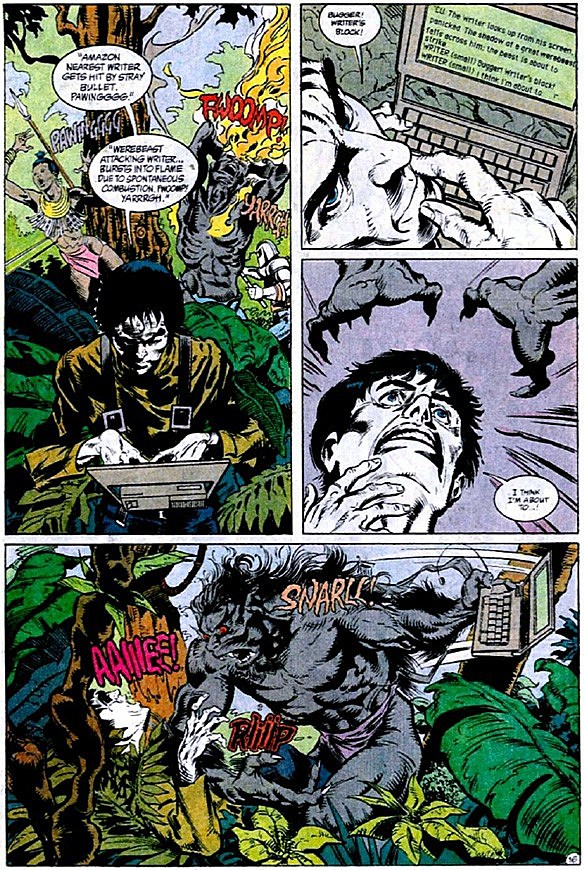 Writer's block. And a werebeast.

Not coincidentally, that's how missed deadlines are dealt with here at ComicsAlliance.