Q: On Scooby-Doo, do you prefer the monsters to be real or people in costumes? -- @heythisisbrian

A: You know, as much as I tend to allow myself to be defined by my obsessions -- and in this column, one in particular definitely springs to mind -- I never really thought of myself as a big Scooby-Doo fan until pretty recently. It sort of snuck up on me, to the point where I didn't realize how much thought I'd given to that show over the years until I was doing an interview with Mystery Inc. executive producer Tony Cervone, and I got so excited when I asked a particular question that he sort of took a step back and said "Wow... you really like this show."

I'm not sure how it happened. One day you're just going along, living your life as normal, and the next you're frothing at the mouth in rage over a Cartoon Network original movie because it violated the very premise of the franchise! Somewhere along the line, I woke up one morning with some very strong opinions about Scooby-Doo. 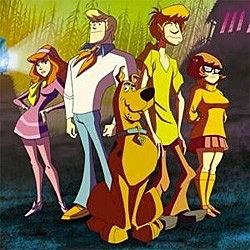 And the topic you asked about, Brian, is the one that I have the strongest feelings about. Some may live and die by combing through episodes for Velma/Daphne subtext and the lopsided rhombus of unrequited love orbiting a talking dog, others may devote themselves to charting the parallels between Mystery Inc. and The Many Loves of Dobie Gillis, but I will fight tooth and nail over the idea that there should never, ever be even a trace of the supernatural in the world of Scooby-Doo. And as far as I'm concerned it's not a matter of preference, either -- it's so deeply ingrained into the premise of the show and the way the characters interact that if actual monsters do show up, the whole thing collapses.

Don't get me wrong, as I'm pretty sure the record will show, I love the supernatural as a storytelling element. In real life, I might be a die-hard skeptic -- such a Velma -- but when you're talking about stories, there's something undeniably appealing about Draculas and Wolfmans and other assorted monsters. They're the embodiment of all of our fears and anxieties, given a physical form and weaponized against us. There's an amazing kind of power in those ideas, especially when it comes to stories that show us triumphing against them.

I even get why it might be appealing to make the monsters real for Scooby and the Gang. After all, fighting real ghosts and monsters makes for a more exciting show, especially once kids have twigged to the formula the original series was built on, which inevitably and invariably led to the unmasking and grumbling about meddling kids that would become the show's signature element. When it's not done exactly right, it can be a monumentally boring way to kill an hour, even if Batman, Robin and Jerry Reed -- or as I like to call them, the Holy Trinity -- are involved. And to be honest, it falls short of that mark an awful lot, to the point where I'll be the first to admit that more often than not, I'm a bigger fan of the franchise in concept than in execution.

So on one level, I completely understand why the series has occasionally gone in that direction with stuff like The 13 Ghosts of Scooby Doo or the recent live-action movies on Cartoon Network. Adding in actual spooky threats makes things more, well, threatening. There's an unpredictability and a danger to the supernatural that you just don't get from someone's crooked groundskeeper trying to scare folks away from a ski lodge with a length of rope and a couple of pulleys, and putting characters that are already defined and beloved into a new sort of situation seems like it'd be a great way to shake things up.

And that would be great, if Scooby Doo was a cartoon about kids fighting monsters. But despite appearances to the contrary, it's not.

Scooby-Doo is a cartoon about kids looking for truth. 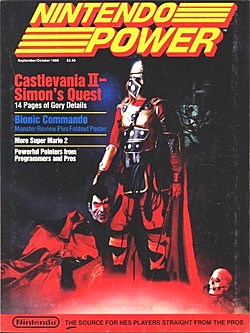 Michael Ryan recently wrote a really interesting article that suggested the decision to keep real monsters off of Scooby-Doo was originally done in order to appease parents who wanted something that was just scary enough to keep a kid's attention without being so scary that they wouldn't actually get "excited." They wanted to have the fun of monsters without the consequences of having to deal with nightmares like the parents of those kids who saw Simon Belmont hoisting up Dracula's severed head on the cover of Nintendo Power. It was all meant to be like the televised equivalent of a Nerf Dracula, taking something that was supposed to be scary and blunting it down until the the big reveal at the end of every episode, which would show kids that the monsters they were scared of were just normal dudes.

It's certainly possible to look at the show like that -- as Ryan points out, there were critics when the show premiered back in 1969 that saw that as a selling point -- but whether or not it was the intent of the creators, what they ended up with was something that went far beyond that idea.

Because that's the thing about Scooby-Doo: The bad guys in every episode aren't monsters, they're liars.

I can't imagine how scandalized those critics who were relieved to have something that was mild enough to not excite their kids would've been if they'd stopped for a second and realized what was actually going on. The very first rule of Scooby-Doo, the single premise that sits at the heart of their adventures, is that the world is full of grown-ups who lie to kids, and that it's up to those kids to figure out what those lies are and call them on it, even if there are other adults who believe those lies with every fiber of their being. And the way that you win isn't through supernatural powers, or even through fighting. The way that you win is by doing the most dangerous thing that any person being lied to by someone in power can do: You think. 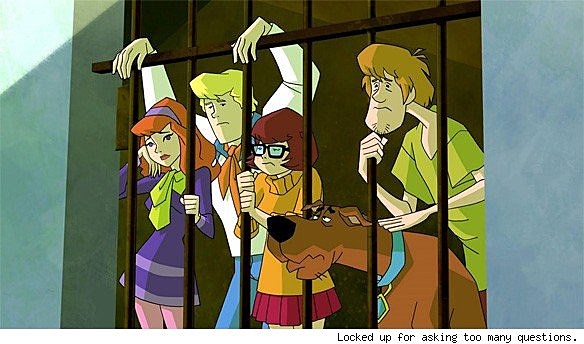 But it's not just that the crooks in Scooby-Doo are liars; nobody ever shows up to bilk someone out of their life savings by pretending to be a Nigerian prince or something. It's always phantasms and Frankensteins, and there's a very good reason for that. The bad guys in Scooby-Doo prey on superstition, because that's the one thing that an otherwise rational person doesn't really think through. It's based on belief, not evidence, which is a crucial element for the show. If, for example, someone knocks on your door and claims to be a police officer, you're going to want to see a badge because that's the tangible evidence that you've come to expect to prove their claim. If, however, you hold the belief that the old run-down theater has a phantom in the basement, then the existence of that phantom himself -- or at least a reasonably convincing costume -- is all the evidence that you need to believe that you were right all along. The bad guys are just reinforcing a belief that the other characters already have, and that they don't need any evidence before because it's based in superstition, not reason.

Which is why the existence of the supernatural just doesn't work within the framework of Scooby-Doo. It wouldn't work even if it were done in such a way that they were discovering the truth that real monsters actually existed against a disbelieving public, which is a premise that's been done really well elsewhere. There's an underlying logic to the world of Scooby-Doo that just boils down to Reason vs. Superstition, and in that battle, superstition can never win.

It goes down into the way that the characters are built, too, specifically with regards to Shaggy and Scooby. They're the first ones to run away whenever anything spooky happens, and more importantly, they're the ones that are always too scared to look for another answer. Whenever they're confronted with anything that has the whiff of the graveyard about it, they're the ones that want to hop back into the Mystery Machine and call it a night, because they are literally terrified beyond reason. In short, they're cowards. 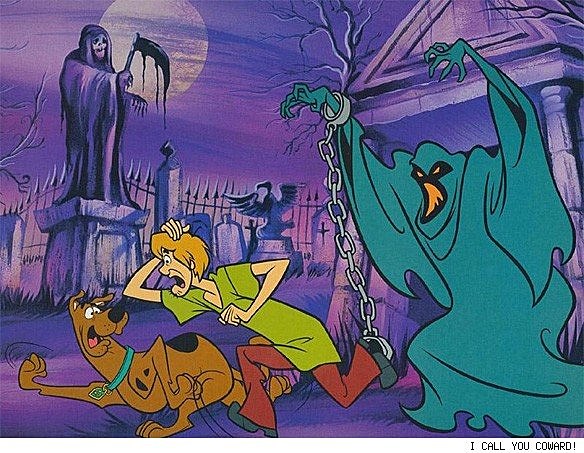 But if the supernatural does exist, then suddenly they're not cowards anymore. They're perfectly reasonable people (well, person and dog, but you know what I mean) who have come to a rational, logical conclusion that there are things out there beyond their mortal understanding. Running away becomes a pretty fair course of action, because a world where the supernatural exists is world where the average kid has a lot to be afraid of.

Again, that can work in a story that's built for it -- Harry Potter comes to mind as a story fit to burst with the supernatural where someone has to overcome those very legitimate fears in order to save the day. But in the world of Scooby-Doo, Shaggy and Scooby's cowardice is ingrained in their characters; it's always going to be there no matter how many times they're proven wrong. And it's there because in that world, we have to see them proven wrong over and over again, because we have to see that reason, curiosity and thinking always triumph over fear. That's their entire function. It's what makes them such enjoyable characters to watch.

And when you take all that together, it's a big part of what makes the current series, Scooby-Doo: Mystery Inc., such a great show. Not only does it embrace the idea of the gang seeking out the truth behind the crooks who prey on superstition, it does so to the extreme where they're pit against an entire town of adults who lie to them. It's particularly telling that Velma, who has always been the show's most iconic thinker, is seen in direct conflict with her parents, who have a vested interest in keeping up the lie of Crystal Cove being a haunted town in order to sell their souvenirs. She ends up valuing the truth more than her own self-interest, and in the end, so does Fred, on a much more personal level. Seriously, watch the show, it's fantastic. 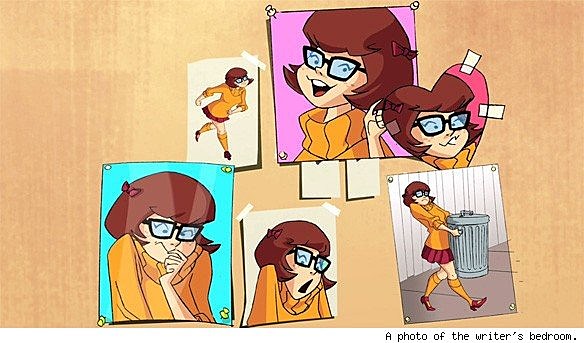 That's what makes the show great. That's why Scooby Doo endures when similar shows like Speed Buggy or Jabberjaw or even the surreal masterpiece that is Butch Cassidy and the Sundance Kids fall by the wayside: Because it's not just a show about a bunch of kids and their talking dog fighting monsters. But when you add in the supernatural, that's exactly what it becomes.

Q: Where's a good place for a new reader to get into UDON's Street Fighter comics? What are the best or most important trades? -- @rxchrisg

A: I'm a huge fan of the Street Fighter comics, and while they're all pretty fun, the Street Fighter Legends miniseries are far and away the best. The Chun-Li one is a solid action story, but Sakura and Ibuki (the latter of which was written by Skullkickers' Jim Zubkavich) are just everything bright and fun about those games condensed into four issues each, plus all the Dan Hibiki -- the single greatest video game character ever -- you can handle. They're definitely the ones to grab.