DC Comics has been producing holiday comics for a full 70+ years now, ever since Superman first teamed up with Santa to encourage kindness and generosity in "The Christmas Adventure!"

So with seven solid decades of holiday fun, some of them are bound to rise to the top, which is why we've asked ComicsAlliance contributor and Christmas comic aficionado Chris Sims to rifle through the long boxes at the North Pole and bring us his picks for DC's Twelve Greatest Holiday Stories!!

An otherwise standard holiday-themed offering about Batman fighting mobsters that use a department store Santa Claus as the key to a robbery, this story is primarily notable for two things:1. It has one of the best Christmas story titles of all time, and2. It's the first work on a Batman story by a then up-and-coming aritst named Frank Miller, who would go on to redefine the character with "The Dark Knight Returns" and "Batman Year One," before doing... well, something to the characters in books like "Batman/Spawn" and "All-Star Batman and Robin the Boy Wonder."

Other than that, it's pretty standard, although it is worth noting that Batman totally knocks a guy out by throwing a Christmas tree at him: 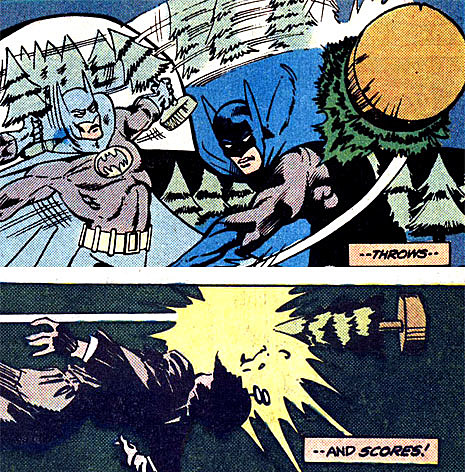 "Justice League International" artist Kevin Maguire draws Alan Burnett's story of the annual JLA Satellite Christmas party and shows how superheroes get down on the holidays: By doping up their enemies (in this case, the indestructible Shaggy Man, who gets dragged to the party after Red Arrow and Green Lantern don't want to take the time to drop him off with the cops after dosing him with Batman's special tranquilizers), having Firestorm use his molecular powers to spike the punch, and then hitting the dance floor, where Black Canary and Zatanna compare fishnets underneath a disco ball made of the Metal Men. 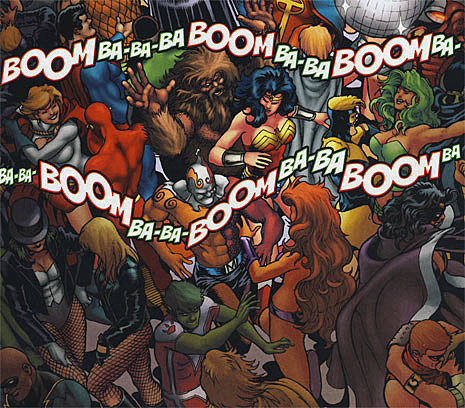 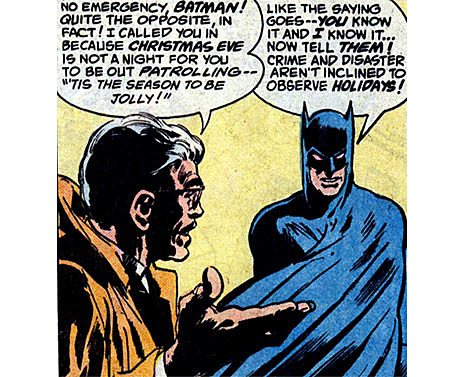 We're not gonna lie: We're absolute suckers for a sentimental Christmas story, and this one, which shows that even the people of crime-riddled, clown-plagued Gotham City can take a day off to give each other presents, is right up our alley. In fact, the only thing we like more than the idea of Commissioner Gordon summoning Batman with the Bat-Signal just so he won't have to spend Christmas Eve alone is the fact that in this story, it's revealed that Batman is so good at singing that even the sound of his voice can stop crime. 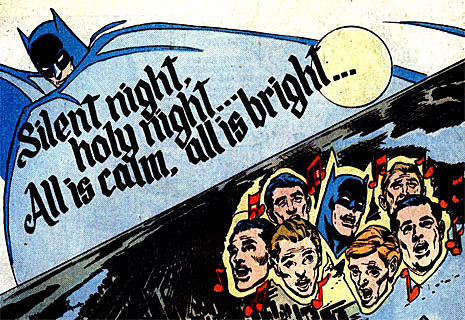 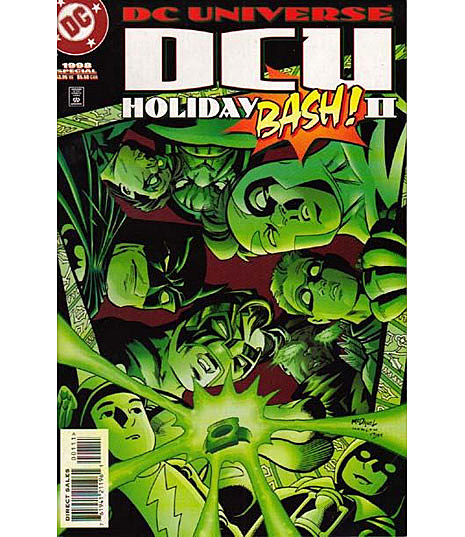 There are roughly 24,000 Christmas comics with the title "Present Tense," including a "Flash" story by Mark Waid about Wally West buying a horrible sweater for his girlfriend that's not bad at all, but our favorite is a two-pager by Ty Templeton.
Why? Three words, folks: Santa. Versus. Darkseid. 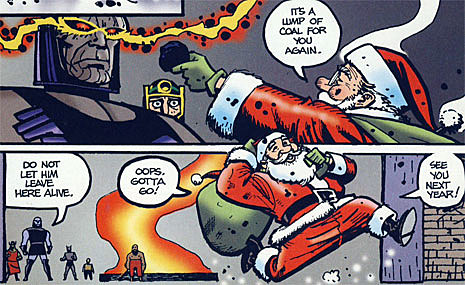 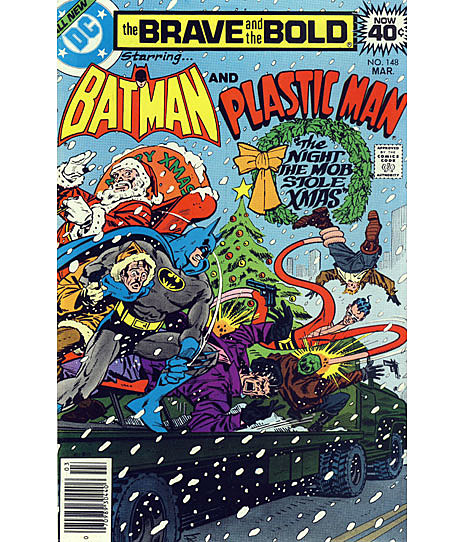 We've mentioned Batman quite a bit on our Christmas countdown already, but this one features the Dark Knight in the kind of joyful insanity that only the team of Bob Haney and Jim Aparocould bring. The plot concerns Batman teaming up with Plastic Man to fight a bunch of mobbed-up Scrooges who steal the world-famous Lacy's Department Store (get it?) Christmas Display in order to hide their cigarette smuggling (or "butt-legging," as Batman calls it) operation.The real treat, however, is when Batman starts talking in trucker slang, which we like to think of as Bob Haney's gift to us: 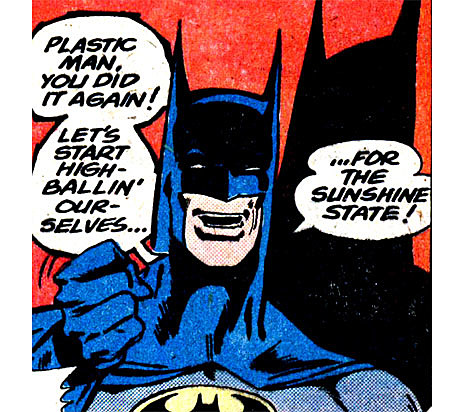 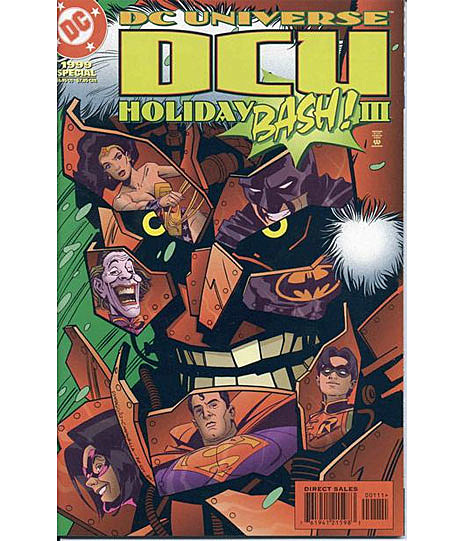 Mark Waid and Humberto Ramos's run on "Impulse" was one of the best all-ages comics ever made, and the Christmas story Waid did with co-writer Devin Grayson and artist Craig Rousseauis just as good as the rest of the run.

Unlike a lot of Christmas comics, this one -- as the title implies -- actually has an authority figure (Impulse's humorless guardian, Max Mercury) trying to convince the hero that Santa Claus doesn't exist. That's an uphill climb when you're dealing with someone who actually knows super-powered altruists with secret bases in the Arctic, and it leads to Impulse stepping into Santa's shoes (and even giving out his own presents!) when a trip to the North Pole gives him the wrong idea: 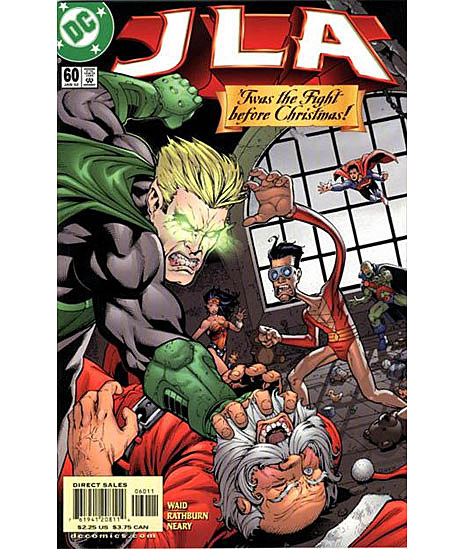 Another one from Mark Waid, this one takes the opposite route, with Plastic Man trying to convince his best friend's skeptical son that Santa not only exists, but is a full-fledged member of the Justice League of America! And why shouldn't he be? Traveling the world in one night means he's got to have the super-speed of The Flash, knowing who's naughty and nice is the product of the detective skills of Batman, and--according to Plastic Man anyway--he's also got heat vision and the combat skills to punch out renegade elves! 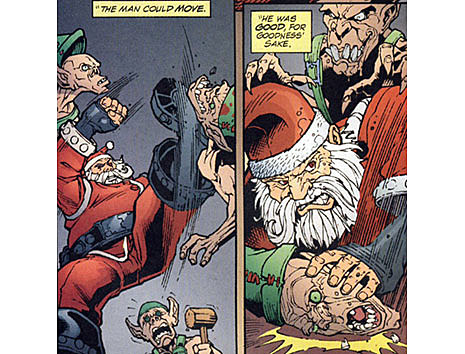 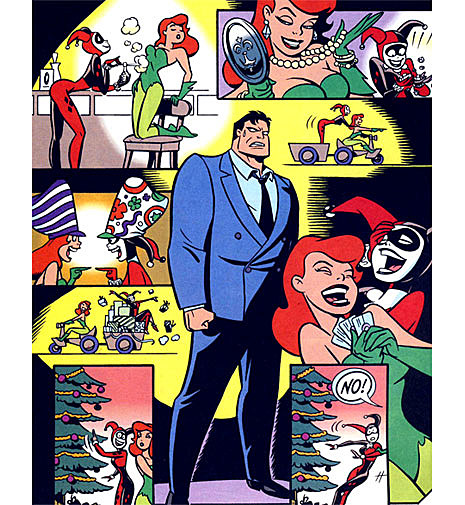 Created by Paul Dini and Ronnie Del Carmenas a tie-in to "Batman: The Animated Series" (and later adapted into an episode), this lighthearted romp saw Poison Ivy staving off the yuletide blues and placating her partner-in-crime Harley Quinn by using her hypnotic kiss to enslave Bruce Wayne and use his boundless fortune to fuel a holiday shopping spree. Of course, as tends to happen when Bruce Wayne is endangered, it doesn't take long for Batman to put a stop to their criminal shenanigans, but not before Ivy lets everyone know what her favorite Christmas song is: 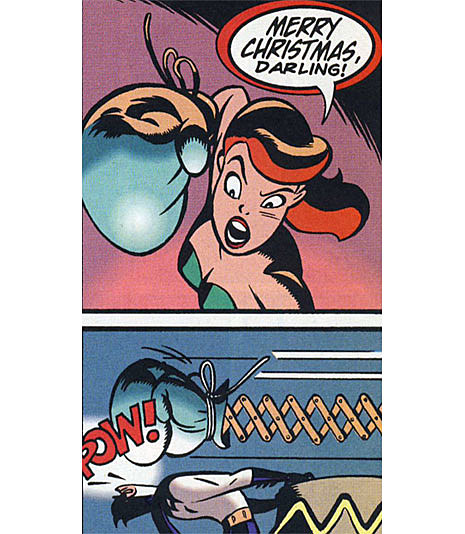 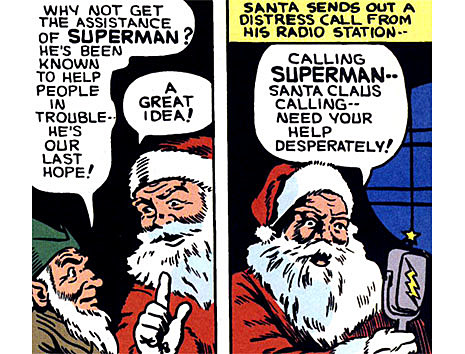 The earliest of DC's Christmas specials, "Superman's Christmas Adventure" is also one of the best, full of pure, uncut holiday fun. It's also completely insane, with two misanthropes called Mr. Grouch and Mr. Meaney taking their rocketship (which they have because, y'know, it's the Golden Age) to the North Pole to kidnap Santa's reindeer and tie Lois Lane to a giant bottle rocket.

Even better, after Superman takes the place of reindeer that have been dosed with knockout gas to help deliver toys, Santa still gives Meaney and Grouch their presents! Whatta swell guy! 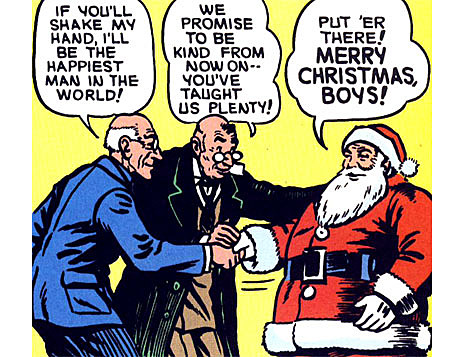 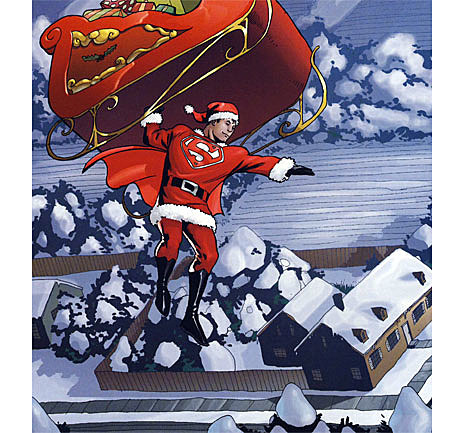 DC's Christmas offerings over the past few years have been pretty hit-or-miss, but this one is the biggest bright spot of the bunch by far. Clocking in at a slim ten pages, Kelley Puckett and Pete Woods bring you the hilarious story of Superman being so moved by a child's letter asking if Santa exists that he decides to play Santa himself to restore his faith... and then reconsiders once Batman shows up on his jetpack and calls him pathetic.

In most stories, having Batman on a jetpack at all would be enough to make it great, but that's just where the comedy starts here, as Batman and Superman bicker about the true meaning of Christmas and then Batman's true motivation is finally revealed: 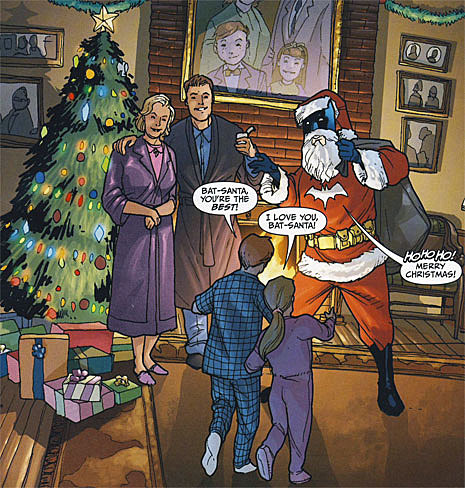 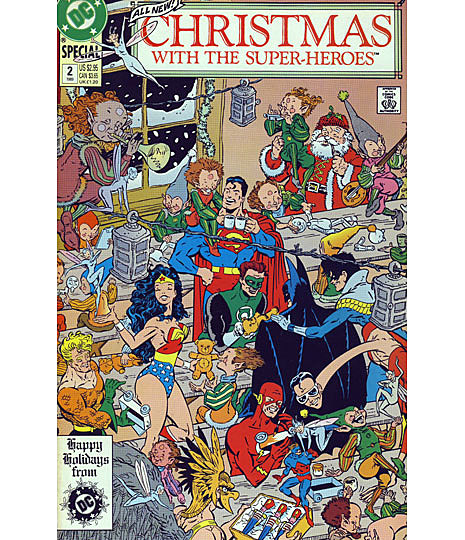 All told, "Christmas With the Super-Heroes" #2 is a pretty depressing affair. It opens, after all, with Superman talking a man with a painful degenerative muscle disease out of shooting himself, and continues with Flash and Green Lantern trying to help out a homeless man who reminds him that other people have it even worse than he does, because, you know, DC Comics in the '80s.

They're all eclipsed, however, by the Deadman story that closes out the book, and what sets that one apart is that it's actually a pretty poignant commentary on the way comics work. Deadman feels down because he can only be with other people on Christmas by possessing them (and thus by stealing their holiday), which is a pretty poor reward for fighting the unsung fight against evil. This is, admittedly, a pretty raw deal, but he meets someone who has it even worse, a young woman who reminds him that the nature of heroism is to do the right thing even when no one knows. And she'd know: She's Kara Zor-El, the Supergirl who had been wiped out of continuity the previous year, never to be heard from again.

Except, you know, when she eventually (and inevitably) was.

These are all great stories, but our all-time favorite DC Christmas Comic? This one: 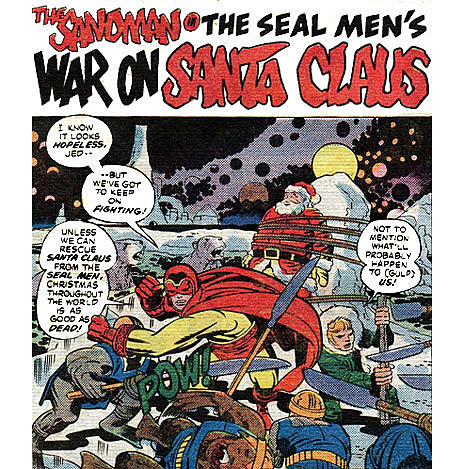 Originally slated to run in Sandman #7, "The Seal Men's War on Santa Claus" was shelved for five years, which we can only assume was because DC was afraid to run a story this awesome.

How else would you explain a decision to run a story where the Lord of Dreams traveled to the castle of the Nightmare Wizard to prove that Santa Claus existed and found himself battling against a tribe of Seal Men who were rebelling against Santa Claus because he accidentally brought them gloves and scuba diving equipment instead of the presents they asked for, thus leading to Santa Claus having a fist-fight with Seal People before it all gets resolved. 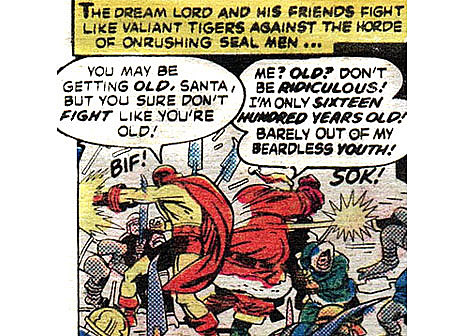 Crazy? Yes. But what would you expect from a Christmas comic by Jack Kirby?