Drama: After taking his irritation with the new Marvel X-Men/vampire storyline to the mattresses (and the internet forums) yesterday, Mark Millar has now taken down the post, apparently after a conversation with Marvel Publisher Dan Buckley. [via Robot6]

am now in boozer but just off the phone with dan b [Marvel Publisher Dan Buckley, presumably] and were all talking tomorow to sort this out. Have never had problem in ten years at company so expect this can be fixed fast. Dan assures me this was a misundrstanding and he's a good bloke so have no reason to doubt. I don't think this is as bad as it looked a litle earlier. Will keep you posted. Ps to mods. Please remove other threads in meantime.

Movies: Chloe Moretz (a.k.a. Hitgirl from the "Kick-Ass" flick) recently talked to JSYK about her role in "Diary of a Wimpy Kid," but they gave us an exclusive quote from the young actress about what it was like to audition for her role in the ultra-violent comic adaptation, in theaters now:

"I actually I went to have lunch with Matthew Vaughn and we talked about the role. It was really funny because I was skateboarding down in Santa Monica at the time and my manager called and was like hey Matthew Vaughn is at the Four Seasons would you like to go have lunch with him? And I was like yes, yes I would. And so I grabbed a sweatshirt out of my brother's car and I put it on and we ran across town and we finally made it to the Four Seasons and I had lunch with him and he was talking about how Hit Girl is kind of like a girlie girl and how she loves purple and she's actually just an eleven year old girl and I was like 'Well...' and I unzipped my sweatshirt and I was like 'This is me.' and I was wearing pink frilly shirt and he was like 'Oh my gosh, that is so Hit Girl!' and I was like 'Really?' So that kind of hit it off and I went in for it and you know I found out that I got the part and I literally yelled at the top of my lungs like 'Oh my gosh!' I was like hyperventilating." 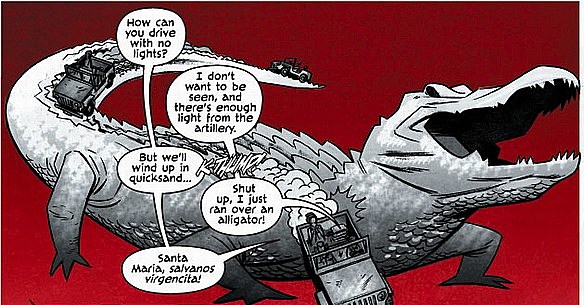 Sweet: Vertigo's Graphic Content blog has posted some pages from their upcoming Fidel Castro graphic novel "Cuba: My Revolution" featuring the art of Dean Haspiel, and they are muy bonita.

Controversy: A parent in Minnesota has decided that the graphic novel a child brought home from school was inappropriate, because of all the drinking, smoking and sexual content, and is making a fuss about it. The objectionable book? BONE. No, really.

Censorship: Mark Fiore can win a Pulitzer Prize, but he can't get his iPhone cartoon app past Apple's satire police. [via Journalista]

Mega-X-Overs: Graeme McMillain talks Messiah CompleX, et al: "For all the NOTHING WILL BE THE SAME AGAIN nature of stories of these scale, the problem is that everything stays the same."