Lately, between Womanthology and DC's All-New-Almost-All-Male 52, the popular lens has turned -- as it is wont to do every year or so -- to the Problem of Women in Comics, namely, whether there are enough of them, and if not, what, if anything, should be done to fix that. As often as not, those conversations have two side effects:

First, they erase the women who do work in comics already by ignoring them, by dismissing them as tokens, or by discarding wholesale the areas of comics where women are most numerous and visible. The difference between the questions "Where are the women?" "Why aren't there more women?" and "Why are so few women here?" is subtle but savage, and too often, the latter two questions and their nuance are discarded in favor of the clean sweep of the former.

Second, they bypass context. The Women-in-Comics problem doesn't exist in a vacuum. It's the product of a myriad of factors, combined and compounded over decades, tangled inseparably with the structure and the very definition of comics as we recognize them. If we're going to fix this (and I don't think there's any reasonable doubt that this is something that needs to be fixed) we need not only to address the immediate problem -- the comparative dearth of women in comics, particularly in shared-universe superhero and other high-visibility genres -- but to examine what created and now maintains that inequality.

So, how did we get here? What steps would you need to take to create and calcify the kind of demographic inequality that has become endemic to comics? Turns out it's not that hard, and I've narrowed it down to three simple steps.

1. Purge the mainstream of all but one narrow subgenre, produced by two publishers.

Stop me if you've heard this one: Long ago, in a galaxy far away, you could walk down to the corner store and buy all sorts of comics: romance comics, adventure comics, crime comics, science fiction comics, humor comics. There were superhero comics, too, but they were one of many genres in a broad popular medium.

At some point, the balance shifted. Suddenly, there were more superheroes and less everything else, and, ever so gradually, the popular definition of comics moved from medium to genre. "Comics" became synonymous with "shared-universe superhero comics," and everything outside of that narrow genre -- subgenre, really -- was relegated to the margins.

Picture for a moment what an analogous arrangement would look like in another medium. Imagine that, when we talk about books, we take it as a given that we're talking about, oh, let's say, historical erotica. Every other genre -- fiction and nonfiction, biography and space opera and crossword puzzles and self-help and mystery -- is lumped together on a few side shelves; and dismissed as fringe. Ridiculous, right? And yet, that's pretty much the state of comics, which brings us to...

2. Spend decades persistently and systematically alienating female creators and readers from that genre. 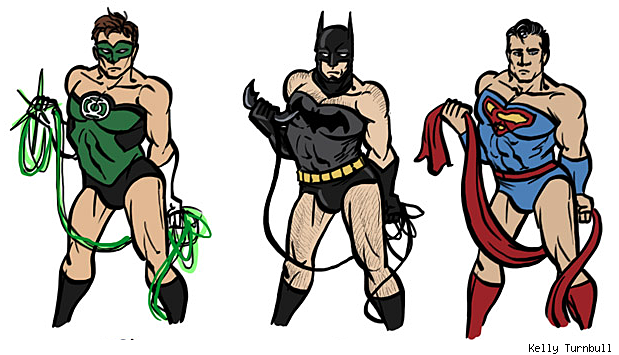 Once you've got a medium that's defined disproportionately by a single genre, the next step is to tie that genre to a specific, limited demographic -- say, white men between the ages of 16 and 35. You don't have to cut out everyone else entirely, but you do need to make it clear that this isn't their territory.

Now, these days, we tend to assume that everyone is working with the best of intentions, and that lack of representation must be a sin of omission, not commission. These days, that's usually true, but the habits and attitude that perpetuate those omissions grew from a foundation of explicit policy. An early version of DC's Editorial Policy Code, implemented shortly after the creation of the Comics Code Authority, leaves little room for debate: "The inclusion of females in stories is specifically discouraged. Women, when used in plot structure, should be secondary in importance."

Before you dismiss that as a relic of a bygone era, remember that superhero comics are almost ritualistic in their invocation of and adherence to tradition. Death is never permanent, and each world-shattering change gradually fades back to a good old status quo. Newer versions of heroes -- chief among them women and heroes of color -- are retconned to make way for the return of their original white, male namesakes, or killed off to provide motivation to the same. While DC may no longer officially mandate that female characters be secondary, Gail Simone's now-legendary Women in Refrigerators project makes it grimly clear that the policy has persisted in spirit if not letter. 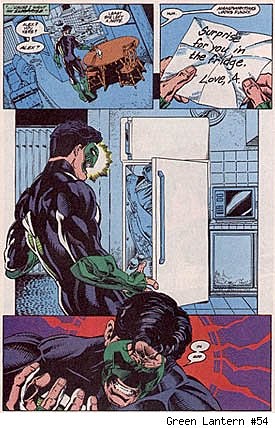 Meanwhile, hire men. Of course, you'll be doing that anyway, since you want creators who reflect and appeal to your target demographic; and since you've got that big NOT FOR GIRLS sign (or at least the outlines where the neon sign used to hang), relatively few women are likely to come calling. You've already phased out the genres that went out of their way to hire female writers and artists, so, all you really have to do at this point is maintain.

You don't really even have to keep it exclusively a boys' club; after all, what threat are a scant handful of women to your status quo? And you can always point out those few women as counterexamples when some upstart dares to call you sexist, thereby implying that by agitating for more women or female-friendly marketing, THEY, not you, are the ones who are effectively erasing women from the popular lens.

(Here, you'll actually be taking one of the arguments from the introduction and twisting it subtly: insisting not only that any criticism that ignores the women in your creative lineup is problematic, but also that any criticism of your male-female creator ratio means that the women already there are themselves somehow not good enough -- deflecting the criticism to your creators rather than its intended target, your hiring practices.)

To recap: At this point you've defined comics as a single-genre field, and, through a combination of commission and omission, you've systematically excluded and alienated women from that genre. But what do you do when women stop looking to you as the exclusive gatekeepers of the medium?

Step 3. Manufacture pretexts to dismiss or simply ignore any work that doesn't take place within that narrow genre / publisher paradigm.

There is a grand old tradition in literature of marginalizing, erasing, and dismissing the work of anyone outside the demographic in power. You can treat them like anomalies, divorce them from history and context; you can patronize and infantilize their creative work; and, of course, you can tuck them neatly away in genres outside the mainstream.

And so, when you are shaking your head and clicking your tongue because there are so terribly few women in comics, and someone brings up Kate Beaton, or Hope Larson, or Carla Speed McNeil, or Lynda Barry, or Posy Simmonds, or Alison Bechdel, or C. Spike Trotman, or Lea Hernandez, or any of a slew of others, you can patiently explain that her work is indie or alternative or art-comics, or small-press, or self-published, and maybe autobio, or even, god forbid, webcomics. And there's always manga, which might as well be menstruating on the page, am I right? (Of course, men work in all of those fields as well, but since they obviously could be making real comics, you can justify that as a creative choice; and anyway, no one is arguing that there are no men in comics.)

If all else fails, you can round women up into a ghetto not of gender but of genre: applaud their cleverness and display them like exotic birds, extrapolate a collective motivation and modus operandi from the work of a few arbitrary representatives, then pat yourself on the back for working so hard to advance the cause of Women in Comics. After all, if women are making such critically-acclaimed creator-owned comics, or graphic novels, or memoirs or successfully self-publishing on the web, why would they even want to come draw someone else's characters? (And here, you can add "saint" to their list of virtues, because surely none of them are so mercenary as to want to take work-for-hire jobs just because they are the most likely to pay living wage!) And if you can convince yourself that the main thing keeping women out of superhero comics is that they don't want to be there in the first place, you have just efficiently justified maintaining the status quo while wriggling out of taking any responsibility for it.

So, if you should find yourself at the end of this three-step process -- which as an industry, we have -- what would it take to successfully address and repair the inequality in comics?

First, we need to keep calling out injustice, and to hold both publishers and media accountable; and we need to do so in ways that don't erase the women currently making comics, nor reduce them to token status. And above all, we need to acknowledge that recognizing the work and prevalence of female creators in one area does not mean that we don't need to address their overwhelming minority in another, nor vice versa. 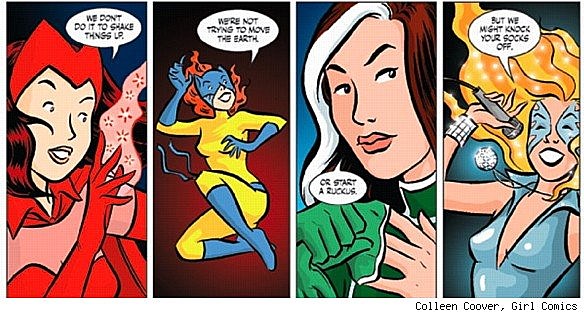 At the same time, we need to stop grouping women in gender-based creative and marketing ghettoes. Womanthology is a valuable project because it's a vivid and inarguable demonstration of both the volume of female comics professionals and the demand for comics of, by, and for women. But it's not a panacea, nor a substitute for not only hiring but seeking women across the board. Likewise, Marvel's Girl Comics did a great job of spotlighting a great many women who do want to work in superhero comics, and the wonderful range of perspectives and styles they'd bring to that table, but because it was a self-contained project, none of that made its way into the main Marvel universe.

And to make a place for those women, we need to radically redefine not only how we discuss the question of women in comics, but how we discuss and define comics, and in particular, superhero comics. This change must take place at a systemic level, and it must be spearheaded by publishers, because they're the only ones with the money and market power to affect a paradigm shift on that scale.

It's going to take more than an imprint, or a few titles, or a few big names. It's going to take rebuilding not only the borders, but the center of comics -- industry, medium, and market. For as long as we keep those alternative voices and narratives on the margins, they'll fail, not because of what they are, but because they have been made marginal. We need to set about deliberately creating a new status quo, one in which those narratives and the voices behind them are popularly recognized and valued -- critically and financially -- as a significant and definitive portion of the comics canon: not fringe, not alternative, but a vital, central component of a diverse whole.

Filed Under: Rachel Edidin, RachelEdidin, sexism, womanthology, women in comics, women in refrigerators, WomenInComics, WomenInRefrigerators
Categories: Opinion
Comments
Leave A Comment
When Everything Is Pink, Nothing Is Pink: Sarah Stern On Color And Creativity [Interview]
MVP: The Top Ten Golden Age Heroines
The Devil’s Executive: Should You Be Reading ‘Brain Damage’?
Make The Moves Up As I Go: The ‘Mockingbird’ Mixtape
In Her Element: The Art of Ramona Fradon
The Lord of Storms Returns: Should You Be Reading ‘GodSlave’?
Embracing Color: Tamra Bonvillain Talks Personal Style And Proper Credit
Unmasked: Should You Be Reading ‘Strong Female Protagonist’?
Creating A Space to Strengthen the Community: VanCAF’s Andrea Demonakos on Cons, Creators, and Fans