Q: Before you have spoken at length about how you believe Batman (for DC) and Ben Grimm (for Marvel) are the most versatile heroes in their respective universes. But both of them are heroes. So, in your expert opinion, which villains are the most versatile, and can be put against virtually any foe and be entertaining? -- C. (via email)

A: For a hero, versatility is one of the things that can push them over the edge from good to great. One of the great things about a character like Batman -- someone you may have noticed I'm pretty fond of -- is that all of the different interpretations you get over 70 years are all equally valid, as long as they stick to the same core idea of what makes him a unique character. You can chalk up part of it to simple longevity and the fact that he's been done in multiple styles, but the end result is a character that lends itself to fresh, interesting ideas.

For villains, though, it's a little different.

By and large, heroes tend to be more versatile than the villains they fight, for the simple fact that they fight a lot of villains. Nobody wants to read about the same fight in every issue of a comic, but if Batman's name is on the cover, he pretty much has to show up in every story. So you end up with one hero (or one team of heroes) and a lot of different villains, just to keep things interesting.

Take the Joker, for instance. He's been around almost as long as Batman, and he's been through just as many different versions. You can use him in stories that cast him as a comedic foil for Batman, a genuinely sinister villain, a complete and utter lunatic, or any of a dozen other interpretations. Grant Morrison's take even went so far as to cast the Joker as someone who's constantly reinventing his own personality, taking the chaotic aspects of the character to the next level by building it directly into his character. It makes every version equally valid, so on one level, he's just as versatile as Batman.

But on another, he's also locked into one specific conflict. He's built to reflect aspects of a single character, so the further he moves away from that character, the less impact he has on someone else. That's not to say that you can't do a good Joker story where he switches to fighting another hero -- they even gave him his own ongoing series back in the '70s -- but it's never going to have the same impact as his conflict with Batman does. And more often than not, even the stuff that doesn't directly involve Batman is still based around the idea that his conflict with Batman is the Joker's driving force.

That doesn't make the Joker a bad character, either. You'd be hard pressed to argue that he wasn't one of the best villains in comics, and he's certainly one of my favorites, but he's built for a particular orbit The same goes for other great bad guys like Lex Luthor, or the Red Skull, or even Magneto when he's in one of his more "Evil Mutant" moods. They all represent very specific ideas that are keyed to very specific heroes, and while they certainly can provide interesting conflicts with other characters, it's not what they're best at.

But there are villains who have that versatility as part of their character, and it's worth noting that between the two biggest shared universes in comics, you tend to find more of them at Marvel than DC.

Even when I was a kid, I was never a big fan of the whole Marvel vs. DC "debate." Both universes have their strengths and weaknesses, and thanks to the talented people that have worked at both companies over the years -- often the same people, sometimes even at the same time -- there's nothing intrinsically better about one universe than the other. Or at least, there wasn't until about nine months ago. But there is a big difference in the underlying structure of how those universes work.

With DC, the characters are often built in a kind of isolation. They're all meant to exist on their own, complete with their own domains that they rarely stray from. Metropolis and Gotham City could theoretically exist just fine without their most famous residents ever meeting, and it wouldn't really change the way those characters operate. And really, that's just fine, because if you start applying any kind of logic at all to the fact that these people live in the same universe -- something I don't recommend you do all that often -- you start to wonder why Superman doesn't just shut down Ra's al-Ghul's entire operation over his lunch break.

The Marvel Universe, on the other hand, is much more tightly knit. Its creators decided to base so much of what they were doing in the same area,even unified a ton of their characters by giving them the same thematic source for their powers -- The Fantastic Four, Spider-Man, Daredevil, the Hulk and even the original idea behind the X-Men all draw from that classic fear of the Atomic Age, radiation. The fact that they were created to be more flawed and -- heavy use of scare quotes here -- "realistic" even puts them closer together in terms of what they can and can't do.

As a result, the Marvel Universe feels like it has a lot more interchangeable parts than their Distinguished Competition. When DC characters show up on each others' doorstep, it's usually A Big Thing, but when Tony Stark drops by the Baxter Building to see what Reed Richards thinks of his latest technological McGuffin, it all just seems pretty natural.

All of which is to say that the Marvel universe lends itself pretty well to villains who can show up and present a challenge to any hero. Which is probably why they have the most versatile villain of all time: Dr. Doom. 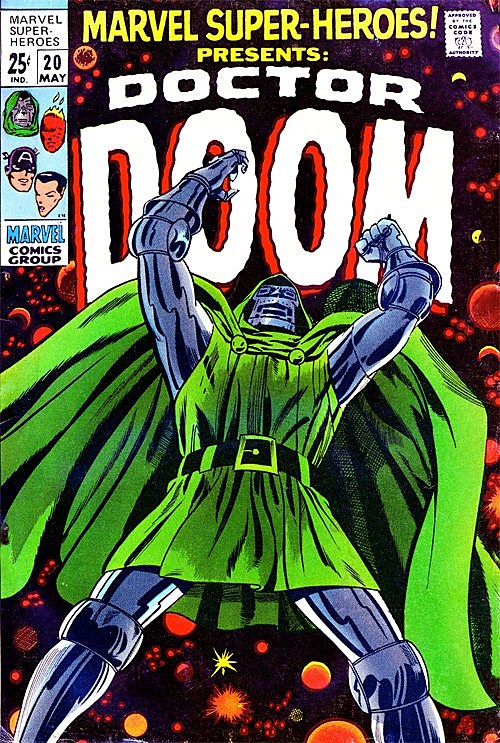 Dr. Doom is arguably the greatest villain in comics, and while he certainly has a set of arch-enemies in the Fantastic Four, he's evolved into the kind of villain that can menace an entire world of heroes. And I think a lot of that comes from the fact that he's essentially built like a hero.

When Stan Lee and Jack Kirby introduced Doom way back in Fantastic Four #5, they established him as someone that was operating on some pretty varied arenas: 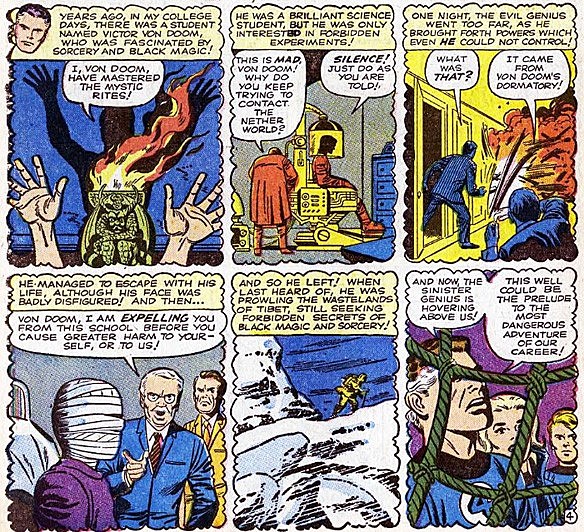 From that first story, we knew that Doom was a brilliant super-scientist, a sorceror who dabbled in the forbidden art of black magic, and -- although the word "Latveria" wouldn't show up for a while -- the monarch of his own country with all the resources that entailed. Those three factors alone make him a great fit for all kinds of varied stories, but it gets even better once you realize that for all his mastery of cosmic forces -- the dude built a time machine -- he was still focused on a very petty act of revenge against someone who slighted him years ago.

So not only does he lend himself to a variety of stories just by virtue of his abilities, but his plans can be as grand or as petty as the story demands. He's not solely focused on destroying Reed Richards, or even on his lust for power. Once the question of why he was trying to reach "the netherworld" is answered and you learn that he was trying to rescue his mother from Hell, an whole new layer is added to his personality, and the fact that he blames Richards for his failure feeds into the ego that drives him to be the force that he claims to be.

He developed the potential to be anywhere. His machinations are so complex, and his talents so varied, that he can believably fight or team up with virtually any hero or villain. The scientific aspect can bring him into conflict with characters like Iron Man or lead to stories of harnessing incredible cosmic energies like the Silver Surfer's, the mysticism can make him a foil for Dr. Strange, the fact that he's the head of a foreign country can bring international intrigue and S.H.I.E.L.D. into the mix, and the overwhelming power that he possesses makes him the perfect character to show up and test any hero that crosses his path. 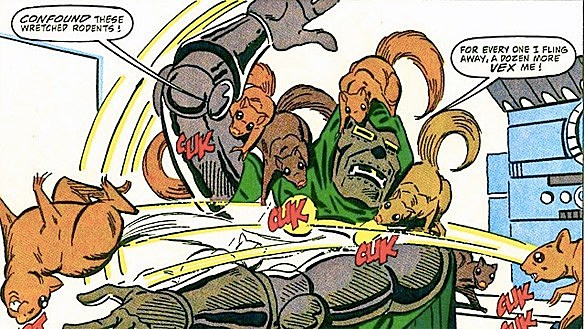 Because that's the other thing about Dr. Doom: He is inherently hilarious. He's a big guy in metal armor with a goofy metal mask that runs around in a green miniskirt and a cape, referring to himself in the third person and building time machines so that he can get his hands on some pirate treasure.

And yet, none of that really detracts from how menacing he is as a villain. He can be as silly or as serious as the situation demands, because he has that history of being played as both. Even that Squirrel Girl story treated her defeat of Dr. Doom as a Pretty Big Deal, to the point where Dan Slott essentially made beating up enemies that should've been way above her weight class Squirrel Girl's super-power.

The end result is a villain who can be great in everything from this... 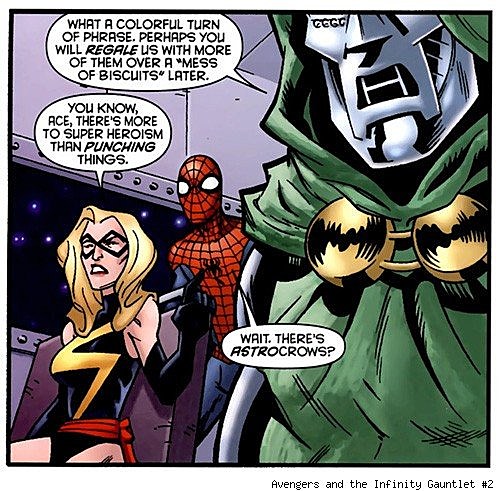 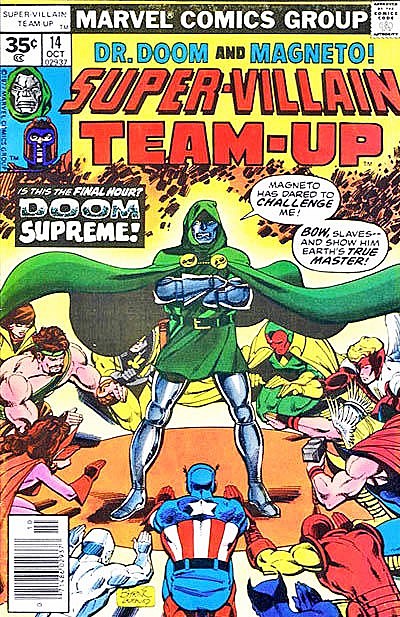 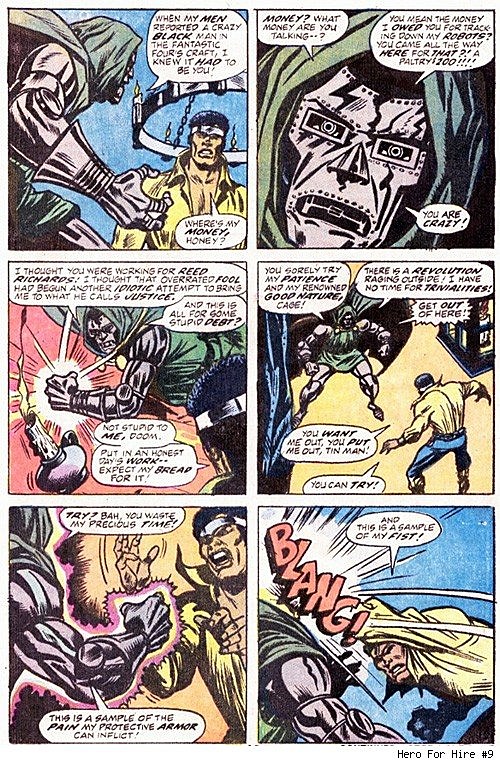 And as long as the core of his character is respected, it all feels equally valid.

Of course, it's also worth noting that I'm a pretty big fan of Arcade, but c'mon: A villain who was designed to show up out of nowhwere and take any hero to a gigantic deathtrap in the form of an amusement park? There's no explanation necessary on why that's genius.

Q: Is there a reason you hate Red Tornado besides the fact he is a robot that cries? -- EamonnGlenn

A: Isn't that enough?

Q: Any plans to celebrate FCBD this year? -- boydstep

A: Yes, actually! I'll be appearing up at Ultimate Comics in Durham, NC alongside my writing partner Chad Bowers and a bunch of people that are way more famous than we are, including Chris Burnham, Joe Keatinge and Brian Clevinger. If you're in the area, swing by to get some free comics and say hi!