Q: How would Cobra Commander fare in the presidential debates? -- @Maxy_Barnard

A: Listen, buster, I don't know what you've heard, but I'm a proud American. I would never, under any circumstances, support an avowed enemy of our country like Cobra Commander in any kind of bid for president. He's not getting my vote, no way, no how.

I mean, if it was Destro, sure. I would definitely vote for that guy; M.A.R.S. Industries is a proven job creator and if you ask me, this country needs a leader with a good head on his shoulders that's made of polished beryllium steel. 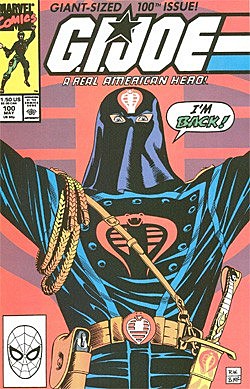 Unfortunately, a Destro/Baroness ticket wouldn't be feasible for a number of reasons, not the least of which being that they're both foreign nationals with extensive criminal records. So in the end, I guess we're stuck with Commander/Mindbender 2012, and as unlikely as it might seem, that's actually a pretty solid ticket.

When you get right down to it, Cobra Commander has just about everything the major political parties want in their candidate -- you know, aside from that thing where he tried to blow up America every week back in the '80s, and that other thing where he might be a snake-person from a mystical society ruled over by Burgess Meredith. Aside from those minor issues, though, he's perfect: A former small businessman who rose to success as the head of a major corporation who also has an extensive military background, and whose foreign policy experience puts everyone else's to shame, as long as we're counting his extensive dealings with with Scottish arms dealers, Australian biker gangs and the occasional extremely confused Japanese ninja. He was even almost Governor of Alaska once, although that had less to do with an election and more to do with a truly bizarre set of circumstances where he tried to wrest legal ownership of the entire state away from the government by stealing a seal -- the State kind, not the animal. Still, I'm going to go ahead and count it.

More than that, though, he's an extremely charismatic leader. That's his defining trait; it's often been written that he's the most dangerous man alive, not because he himself is dangerous, but because he has the ability to motivate dangerous men. And as history has shown us, there are few people more dangerous than undecided voters.

Clearly, a presidential debate would be a cinch. 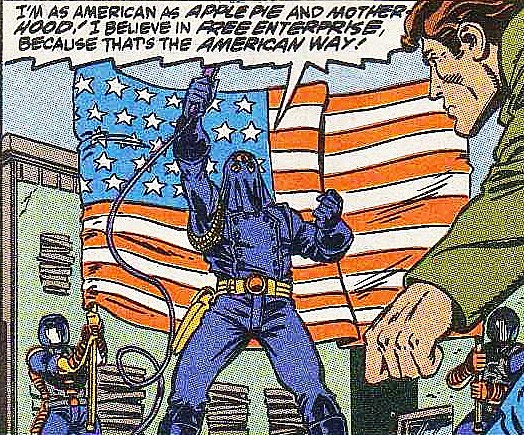 For proof, one need look no further than Larry Hama and Mark Bright's GI Joe #100. I've mentioned this bit of the classic Marvel GI Joe series before in a column about Snake-Eyes, but between the stories where Snake-Eyes got his face fixed and re-messed up in the span of about two issues and the story where he goes to Eastern Europe in the throes of the Arashikage Death Trance, Hama and Bright brought us the return of the One True Cobra Commander.

As for why we need to specify that it's the One True Cobra Commander, well... It's complicated. Suffice to say that it involves Serpentor, that weird battle-suit from the Series 2 cartoons, a kid with one eye and some serious abandonment issues, and a bunch of identical sleeper agents named Fred. Point is, his return in and around these issues shows us exactly why he'd be so great on the podium.

And it also has one of the best splash pages of all time. 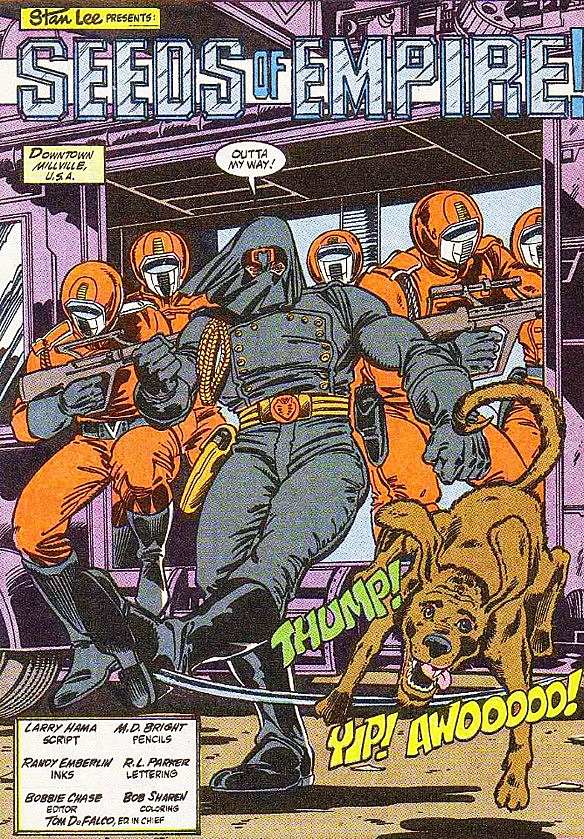 All right, admittedly, that one's not going to win him a lot of votes from the animal rights crowd. But let's be honest, if they can't be bothered to side with someone so dedicated to preserving wildlife that he employed a weirdo named Croc-Master and directly contributed to providing a habitat for the American crocodile, then I guess we know who the real hypocrites are.

But back to the issue. The premise here is that Cobra Commander has just rolled into the town of Millville looking for a new base of operations. Rather than just taking over with a bunch of HISS Tanks and Trouble Bubbles, though, Double-C has opted to take things to the campaign trail, winning over the hearts and minds of the Millvillians. It actually makes a pretty good case study -- Millville is having a rough time in a down economy, and the people there are open to the idea of a change in government.

So, like any good politician, the Commander starts off by laying out his policies in general terms: 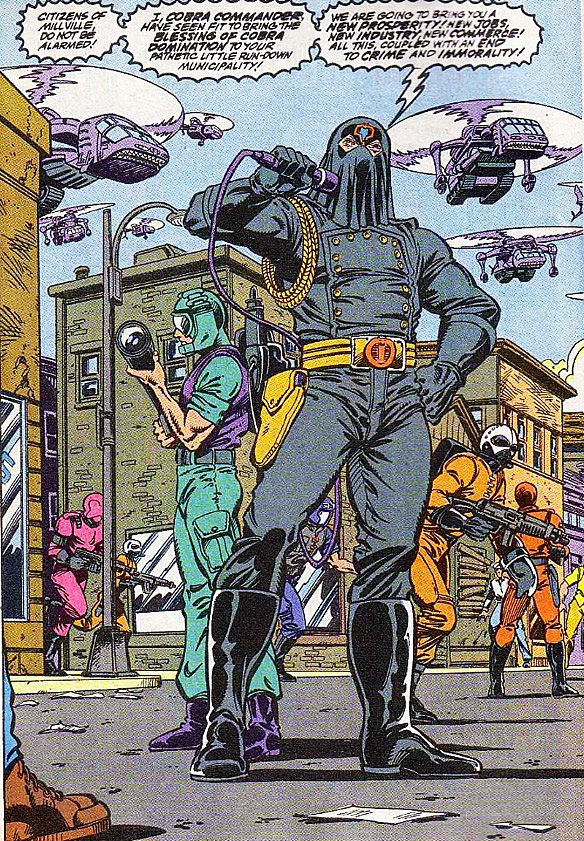 If you've been paying attention to politics lately -- or, Hell, if you've been living in America at all during our seemingly never-ending election cycle -- then promises of new jobs, a revitalized economy and a tough stance against immorality might seem a little familiar. It's the kind of stuff voters love, even though it's not usually delivered by someone standing around with Televipers and heavily armed Crimson Guardsmen.

Before long, though, he starts to get into specifics:

And with that, Cobra Commander just won the debate.

Seriously, have you watched those things? They are obsessed with taxes to a truly unhealthy degree, largely because people tend to flip right the junk out when you suggest that somebody's going to have to pay for all these roads and policemen. You get a guy in there who straight up tells them that he's getting rid of taxes, and it doesn't matter how many weird Corsican twins he has running his campaign, he'll be fifteen points ahead in the polls by the next morning, guaranteed.

And the thing is, he's 100% serious! The fact-checkers have nothing on this guy. Say what you will, but the record will show that Cobra Commander is decidedly anti-Big Government. In fact, I'm pretty sure that 90% of the reason the entire military is always after Cobra Commander is that he's funneling all the profits from Red Rocket Burger into an off-shore account on Cobra Island instead of giving Uncle Sam his cut.

Naturally, this is where he starts to win over the crowd, and we even see him responding to a question from the audience: 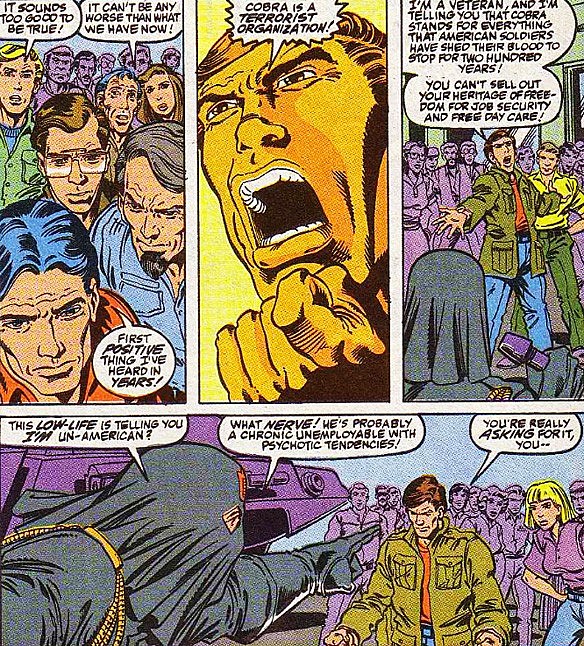 Obviously, he's got this whole debating thing on lock.

It's not just this issue, either. Pretty much every time Cobra Commander shows up, he proves why he'd demolish his political opponents in debates. Just take a look at how he makes the time-honored pledge to reach across the aisle and work with others to get things done once he's in charge: 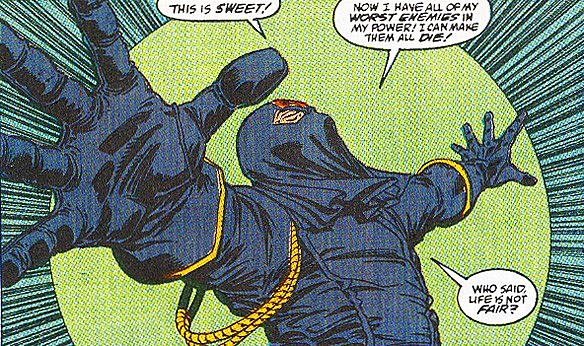 Well, maybe not. But you know that's what they're all thinking when they say that stuff.