Q: What's up with Rudolph's Shiny New Year? Is it so perfect there are no other New Years specials? -- @otherhoffman

A: I've talked about my pure, unconditional love for the various Rankin/Bass stop-motion Christmas specials in past columns, but let me tell you, "what's up with Rudolph's Shiny New Year" is a question I have asked myself on many occasions. I'm not sure if I'd call it perfect, but even stacked up against Santa Claus being raised by a lioness and fighting war against the goblins and an Ani-Magic redhead trying to seduce the Lord of All Vampires, it is downright bizarre. 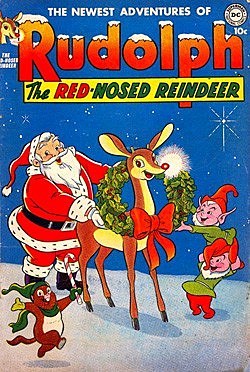 The thing about Rudolph is that he's... well, he's exactly what they say he is in the song: He's the most famous reindeer of all, and that makes him an incredibly lucrative property. Gene Autry's recording of the song reigned as the second-best-selling record of all time until the '80s, presumably because it took something as awesome as Thriller to finally knock it a few pegs down the charts, and DC published an annual Christmas comic about him for thirteen years. And that was before the 1964 TV special made him even more of a household name.

Taking all that into account, it's obvious why they'd want to make more Rudolph stories. The problem is that when you get right down to it, Rudolph's pretty firmly tied into doing one thing. His arch-nemesis is fog, and he manages to overcome that little problem about two minutes into the song. He's pretty limited in that respect, and the comics back that up -- DC in the '50s specialized in finding new things to do with limited power sets, so those stories tended to be about Rudolph using his nose as a signal flare to save Santa or heading down into dark coal mines. I love 'em, but they're a lot like that Simpsons bit about "Knight Boat." There's always a fjord, metaphorically speaking.

But in 1975, Rankin/Bass decided to bypass that little limitation by making a sequel to the original story that pretty much just went insane, based around the X-Menesque themes of being a misfit and that line about all of the other reindeer laughing and calling Rudolph names rather than anything that was really recognizably Christmasy. Don't get me wrong, there's plenty of Christmas imagery in here, but it's kind of like how the people behind Japanese Spider-Man knew that Spider-Man was about a cool teen with spider powers and that there was newspaper photography involved somehow, so they made him a motorcycle stunt racer who got web-shooters and a giant samurai robot from Garia, the Alien Warlord of Planet Spider, and gave his girlfriend a job as a reporter.

That's what Rudolph's Shiny New Year is like. It's the Japanese Spider-Man of holiday specials. Feel free to put that on the DVD box.

It doesn't wait around before it starts to get weird, either: Not only is Shiny New Year a direct sequel to Rudolph the Red-Nosed Reindeer (and the second part of the Rankin/Bass Rudolph trilogy), it takes place immediately after. Like, on the same day. According to narrator and alleged comedian Red Skelton, this adventure happens on "that very same night" as that Christmas where Rudolph guided the sleigh through the fog. Apparently Santa finished delivering his toys, and rolled back home to put on a three-piece suit to check his mail. 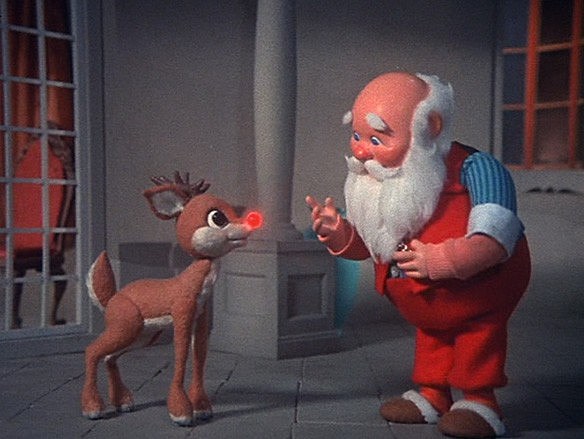 Santa is classy as heck, y'all. Never forget that.

Anyway, the mail contains a bit of bad news from Father Time, who is writing to inform Santa that Happy the Baby New Year has gone missing, and if he doesn't come back, it'll just be December 31st forever. This is our first hint that Shiny New Year's attitude towards time and space might be slightly less firm than, say, Doctor Who's, but believe me, it'll get worse.

Santa obviously wants to help out, but since it's such a legendarily foggy and snowy night, nobody would be able to spot Happy even if they sent out a search party. Except, of course, for Rudolph, who has become Santa's go-to man (er, deer) for this sort of thing after exactly one day. He sends Rudolph out with an ambulatory stopwatch named Ticker who speaks in rhyme so they can go get the lowdown from Father Time. So naturally, they walk from the North Pole to the desert right next door where they must cross the sands while following a star on Christmas Eve with the help of a talking camel named Quarter To Three. 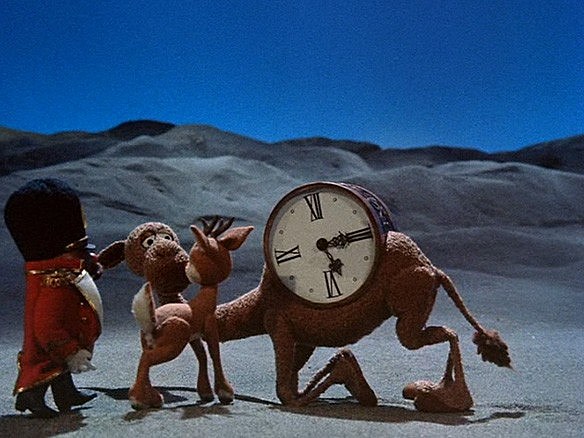 Remember how I said the Christmas imagery was like Japanese Spider-Man? This would be the major factor. There's a desert and a star to follow, but it's all weirdly divorced from the source material.

Anyway, they get there and Father Time explains through the beauty of Ani-Magic Musical Numbers how time works as a series of babies that grow up and then die over the span of a year, all while cheerily swinging around a scythe: 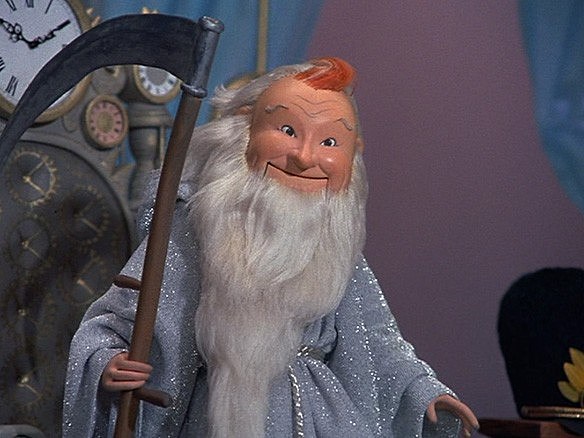 The death imagery of Father Time and the Old Year is pretty solidly established, but man, it is weird and creepy to see a smiling reminder that all will die and be reaped by the ongoing inexorable march of time singing a funeral dirge to a puppet of Rudolph is pretty darn weird.

Father Time gives Rudolph the skinny about Happy and how he has comically large ears, and ran away -- or toddled away, at least -- because people kept laughing at him. Rudolph is pretty upset by this turn of events, and to the show's credit, Billie Mae Richards does a pretty amazing job of making a line like "I bet they wouldn't even let him play any... New Year's games" seem heartfelt and genuine. Still, it raises a bunch of questions about how this whole Baby New Year thing is supposed to work.

I mean, not to get all Warren Ellis or anything, but shouldn't the baby be born when the new year arrives instead of toddling around as early as late December? Was 1976 born premature? Is there some Moms New Year out there getting pregnant in March? These are the kind of things that keep me awake at night, and they're never really explained. Which is probably for the best.

What is explained is how the increasingly nebulous concept of time works in the Rudolphverse. See, despite Father Time's earlier chat about how nothing can stop the progression of time (and my own line about the old year dying and shots of scythes and whatnot), it turns out that all the past years are still alive and well, living in an archipelago where each island is devoted to a particular year: 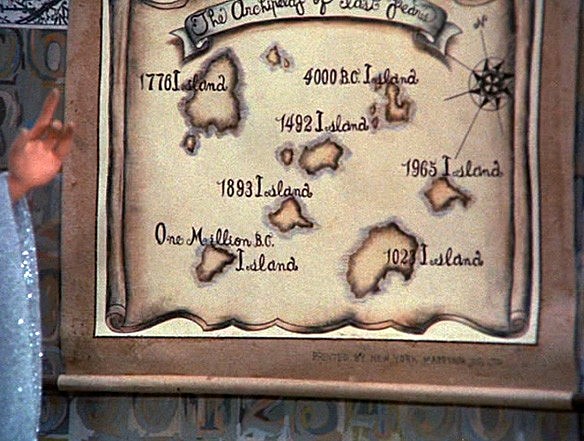 And not really even that, they're more devoted to one particular thing that happened during that year. Rudolph mentions that "1492 was too busy discovering things," which means they're choosing to skip over the death of Lorenzo de Medici and the ascension of Rodrigo Borgia as Pope Alexander VI -- presumably because Rankin and Bass had never played Assassin's Creed -- and in 1776, they celebrate the 4th of July every single day. And... how are there even days?! How do they measure time in the land beyond time?! Is it just always the 4th of July there and Rudolph and his bros just perceive it as linear time because their minds can't comprehend anything else? So confusing.

And it gets even weirder when their search takes them to 1023, the year when, according to Red Skelton, every fairy tale actually happened: 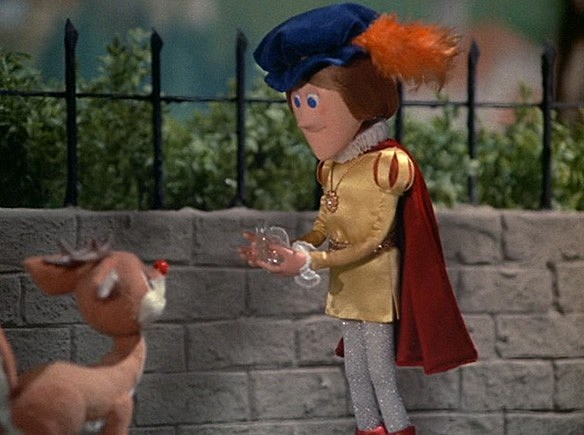 On the bright side, the embodiment of 1023 is played by Frank Gorshin, as is that weird camel from earlier.

The best year, though, is unquestionably One Million Years BC, as it features both a) The Dick Van Dyke Show's Morey Amsterdam as a caveman, and b) a choir of dinosaurs: 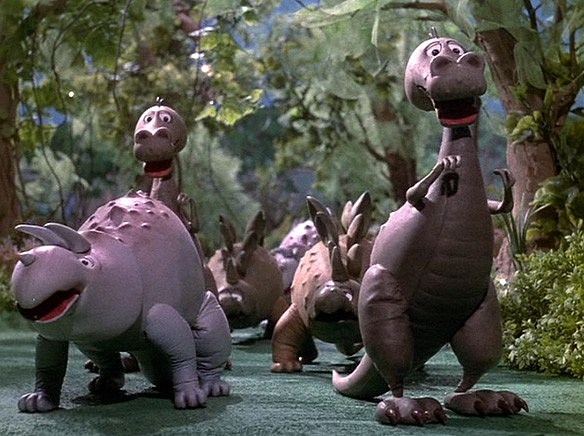 I would probably buy an ankylosaurus solo album.

Further complicating matters is the presence of Eon the Terrible, a weird vulture monster who lives for an eon (hence the name), which happens to end on December 31: 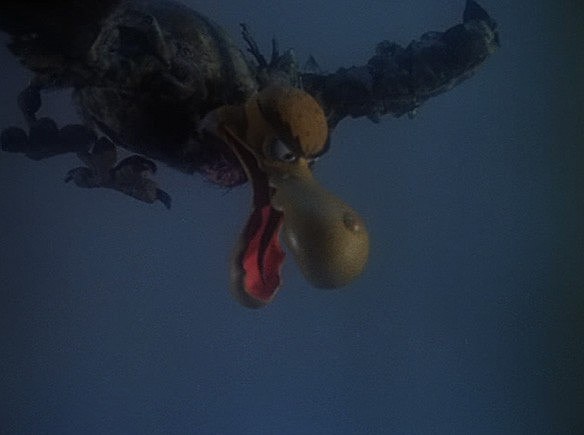 So obviously, it wants to kidnap and enslave Baby New Year so that it will never turn into ice and snow. Obviously.

There is also a whale involved.

Eventually, Rudolph and his new pals rescue Happy from Eon, but it's right at the stroke of midnight on December 31st, which means they have until "the twelfth bong" (hilarious) to get him back to Father Time's castle. Which of course means that the real hero of the story, Santa Claus, has to show up with his sleigh that's fast enough to get around the world in a single night and take him back. 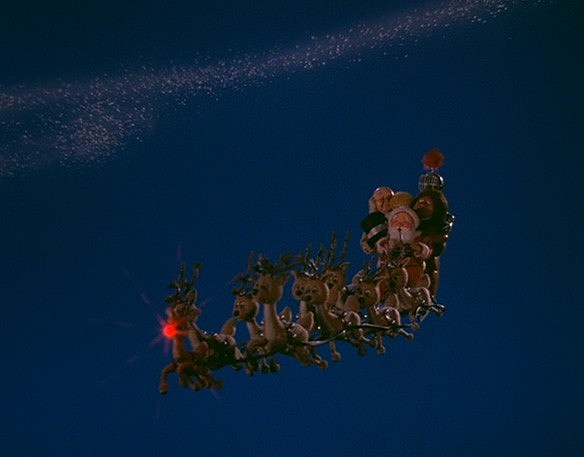 And again, so many questions: It takes Rudolph the whole six days to finish this little task and save the entirety of the timestream, when I'm pretty sure Santa could get that s-word done in about five minutes. Seriously, they're looking for a little kid, and you know who's really good at finding kids because he sees them when they're sleeping and knows when they're awake? Santa Claus! I mean, yeah, he gets the call after he gets home on Christmas Eve, but it's not like he's going to sleep for the next week or anything. And now that I think of it, Rudolph didn't even fly until the last two minutes! He had to ride boats and whales to all these islands!

But I guess the point is that Rudolph saves the concept of time by hanging out with Morey Amsterdam and Frank Gorshin until he finds a big-eared baby on the first bong. And that's... the true meaning of New Year's.

Of course, it all really comes to a head in the third part of the trilogy, in which Rudolph and Frosty team up to stop the evil wizard Winterbolt from robbing a circus with the genie of the ice scepter, but I guess I'll get around to that in about seven months. Happy New Year!