Q: If you had to assemble a team of stand-up comedians to fight crime as the Justice League of Comedy, who would be in it and why? -- @Mattchild

A: As someone who got his start as a comedy writer before I got into the downward spiral of pseudo-brainy, self-referential essays about Batman (see: every other installment of this column), it shouldn't come as a surprise that I like comics of the stand-up variety almost as much as I like the comics that have two staples and a cover. In other words, I'm a total comedy nerd, and after talking your question over with fellow comedy nerd (and my co-host on the War Rocket Ajax podcast) Matt Wilson, I think I've figured out a pretty solid team based on the Morrison/Porter-era Big Seven lineup.First up, my stand-up stand-in for Superman, Louis CK: 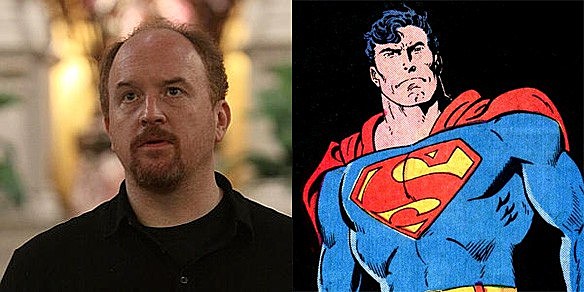 It might seem counterintuitive to give Superman's spot to a guy who's probably best known for some pretty pessimistic material, but as Matt said in our conversation about it, the guy's untouchable. Much in the same way that Superman's greatest role is as an inspiration to others, CK is often considered to be a "Comedian's Comedian" -- and occasionally a "Comedian's Comedian's Comedian," which is just silly. He's a four-time Emmy Award nominee as a writer on The Chris Rock Show and Late Night with Conan O'Brien, he's constantly producing new material, and he even named his last special Hilarious and then managed to live up to that title. Heck, this is the guy who wrote Pootie Tang, the single most underrated comedy of the 2000s!

Currently, he's got a TV show, Louie, that he's writing, producing, directing and starring in with carte blanche from the network, and if that's not the best analogy in stand-up comedy to Clark Kent singlehandedly keeping the Daily Planet going for the past 70 years by reporting on his own adventures, then brother, I don't know what is.

Plus, there's a nice level of Superman-style inspiration to his work. Not only did he famously remind people that everything is amazing right now, an interview in the New York Observer revealed he decided to make TV when he was a kid because he wanted his mom to have better shows to watch:

"I remember thinking in fifth grade, 'I have to get inside that box and make this s--- better,'" he said. "Because she deserves this."

Not gonna lie, folks: That makes me mist up a little like the end of All Star Superman. Granted, Superman probably wouldn't drop quite so many c-bombs, but other than that, he's a solid fit. Plus, there's the possibility that a romance would blossom and we'd end up with Lois CK, and that would be amazing.

Next up, we have our ersatz Batman: Paul F. Tompkins. 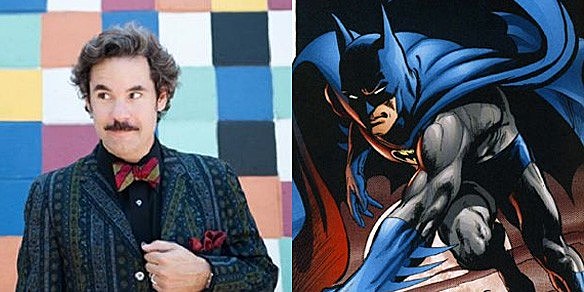 Admittedly, Tompkins is not exactly what you'd call a grim avenger of the night, but he does have those snappy '40s style suits and currently rocks a full-on mustache in the style of Batman's late father. Seriously, how he managed to not be cast as Thomas Wayne in Batman Begins, I will never be able to figure out.

What really makes him fit the role, though, is the subject matter of his bits. Not only does he have an entire extended discussion of the term "Freak Wharf" as an inexplicable slang term for a mental hospital -- which has shockingly never been used to refer to Arkham Asylum -- but he actually has jokes with villains that would fit right into Gotham City. Vicious dogs, people offering trick cans of "Peanut Brittle" and a withered old shut-in named Kilroy who requests meat delivered to his door in "real thin slices, real thin slices!"? That's not just a comedy album, that's the plot to one of those creepy Peter Milligan issues from the early '90s.

Plus, Batman totally prefers cake to pie. Everyone knows that.

Next up is the replacement for the Martian Manhunter, Patton Oswalt: 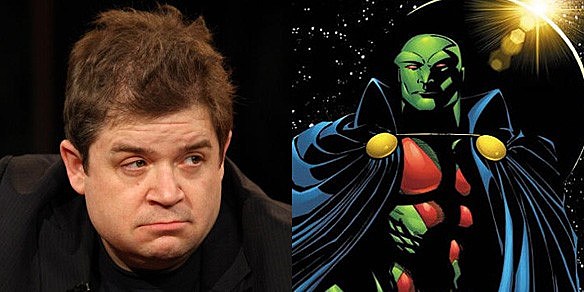 As far as I'm concerned, J'onn J'onzz, the Manhunter From Mars-- not to be confused with his highly successful cousin, G'eoff J'onzz -- is a necessary part of the Justice League. He's been a member of almost every incarnation, and as a result, as Batman put it in the pages of Justice League International, he understands the group dynamics of super-heroes better than anyone else.

Patton Oswalt, on the other hand, doesn't quite have the set of super-powers that the Martian Manhunter brings to the table -- unelss you consider going from the nerdy villain in the Reno 911! movie a CGI rat to be shapeshifting -- but if there's one dude in stand-up who knows a lot about super-heroes, it's him. Not just because he's a comic book fan, but because he actually wrote a JLA story called "Welcome to the Working Week" that's a) one of the very few Justice League comics to be named after an Elvis Costello song, and b) actually pretty awesome. Plus, he was the guy who put the Comedians of Comedy tour together, and if you're familiar with those guys, then you probably have a pretty good idea of who else is going to make it onto my list.

Stepping into the yellow boots of the Flash: Aziz Ansari. 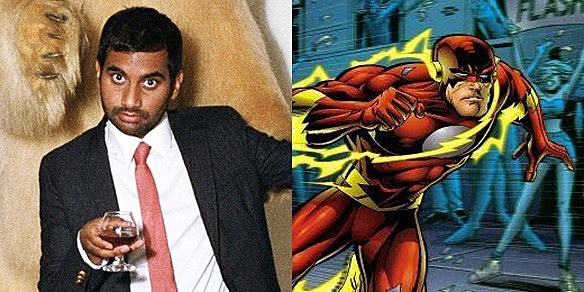 I'm going to go out on a limb here and say that Ansari is probably one of the top two comedians to ever come out of my home state of South Carolina. Like Wally West, he got his start in stand-up as a teenager, though I'm reasonably certain that electrified chemicals were not involved. I mean, it's not out of the question, but I'm pretty sure that would've come up.

Anyway, while he's probably best known these days for his role on TV's Parks & Recreation, his stand-up is really notable for just how fast he's able to build to punchlines, and especially in his earlier stuff, how he'd deliver multiple twists on the same setup before moving right into the next one and then coming back with a callback to an earlier joke. Even on Parks & Rec, his rapid-fire delivery in scenes like the one where he listed off alternate names for foods is like being punched in the face at the speed of light... with laughs.

And seriously, the world needs Raaaaaaaandy: Reeeeeeeebirth. You can have that one for free, DC Comics. 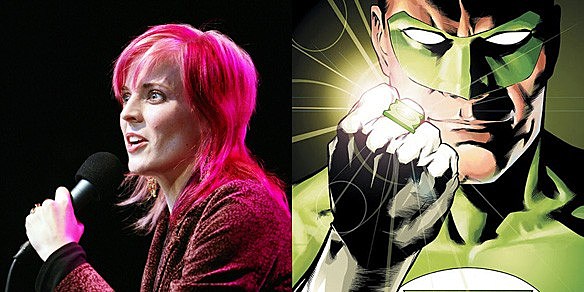 Bamford came pretty close to being the JLC's version of Martian Manhunter, what with the sheer amount of characters she does in her act being the stand-up equivalent of shape-shifting, but Green Lantern fits better.

After all, a magic space ring that can create anything you can imagine is the one super-power that has creativity as a prerequisite, and Bamford has creativity to spare. She is, after all, a woman who did an entire one-hour homemade special without once getting up from her couch. Seriously, the more I talk about it, the more I actually want her to have a Green Lantern ring, just to see super-villains slowly backing away from an army of hard-light constructs speaking in different, over-the-top Minnesotan accents.

And you thought she was going to be Wonder Woman. Sexist.

Wonder Woman, of course, would be Eugene Mirman. 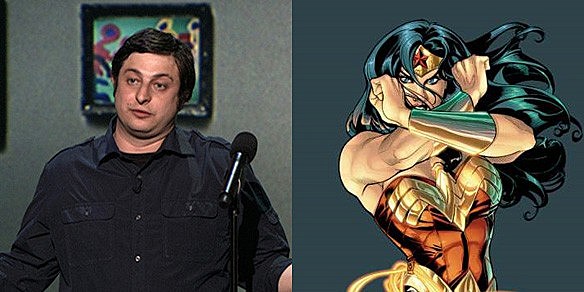 Yes, I know: Eugene Mirman is, in fact, a man. But c'mon, if he was good enough to play M.I.A. in a bit with Aziz Ansari a few years back, I'm pretty sure he could fill in for Wonder Woman. She's all about breaking down those barriers, y'all.

Besides, the core concept of her character is that she came from another land to share her people's philosophy with the world. Mirman, on the other hand, emigrated from Russia when he was four so that he could share a truly hilarious message he got from a band on MySpace on a Comedy Central special. It's basically the exact same thing.

And rounding out our super-heroes, we have Aquaman, played tonight by Zach Galifianakis. 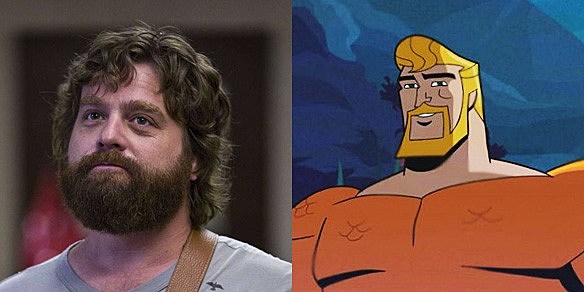 Finally, there's one other member of the JLA from the "Big Seven" era that's unaccounted for: Oracle. And for that, the only possible choice is Tom Scharpling. 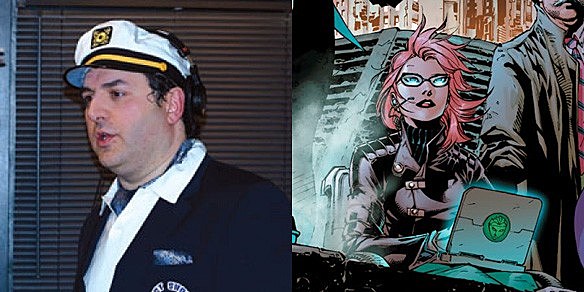 Scharpling isn't a stand-up comic, but as the host of The Best Show On WFMU -- a weekly radio call-in program -- he fits right as the Justice League of Comedy's version of the mysterious unseen voice working behind the scenes to coordinate their actions.

After all, Tompkins is a pretty frequent guest on the show, and a few weeks ago, Patton Oswalt actually called in to chat while he was on stage at the 40 Watt. Plus, Scharpling and frequent collaborator Jon Wurster have a gang of fans called the Friends of Tom with different specialties -- a police officer, a librarian, a soap opera aficionado, a pastor, Philly Boy Roy, and so on -- ready to act as their eyes and ears on the ground. In other words, they're the FOTs of Prey.

There are a few others that spring to mind -- swapping Green Arrow for David Cross is probably the most obvious comic-to-comic switch of all time -- but I think the ones above are the ones to go with. I've got to say, though: It's awfully difficult to think up a scenario where things would get so monumentally dire that a group of comedians would have to step up to replace the Justice League, and if it ever actually came down to that, I'm pretty sure Brainiac would have us all shrunk down to Bottle City size before breakfast. That said, they'd make a way better lineup for a rock club tour than the real Justice League, even if Batman did study for years to have perfect timing.

Q: If you had to compare your fellow Comics Alliance staffers to comic book characters, who would be who? -- @chrisloxley 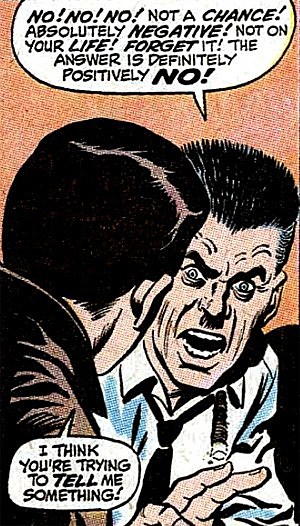 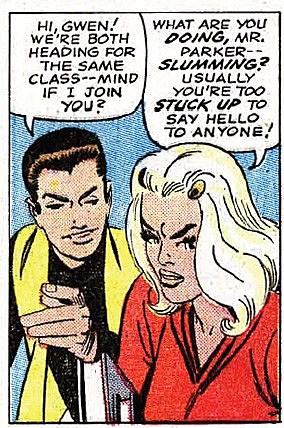 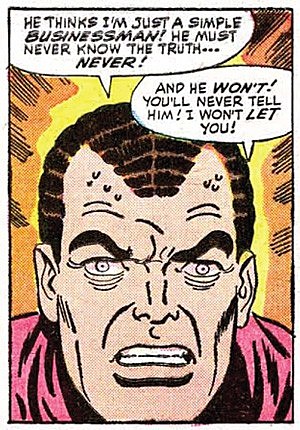 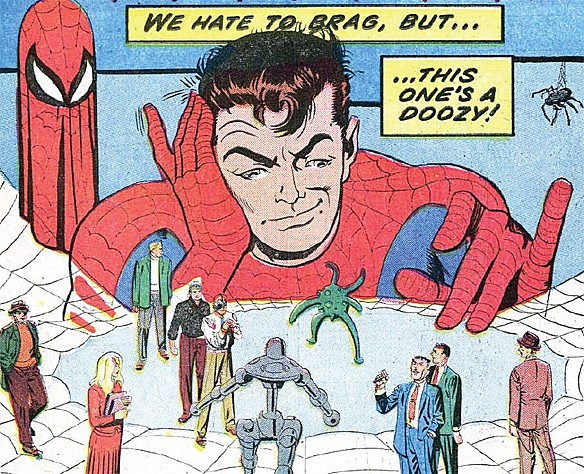