Q: Which superhero identity change do you think has been the most beneficial to the character? The most damaging? -- @bryesque

A: With all the hubbub surrounding the reveal of the new Ultimate Spider-Man this week, it's no wonder that the idea of identities and legacy characters have been on a lot of people's minds. The past few years have seen a lot of identity switches -- some of which were obviously meant to be temporary and others that became temporary after the fact -- with established characters in new roles like Dick Grayson becoming Batman (and Damian Wayne becoming Robin), Bucky Barnes becoming Captain America, and new characters taking over like Jaime Reyes as the Blue Beetle and Ryan Choi as the Atom.

But as for which ones were the best and worst, that's something that I find pretty interesting, because they both occurred within the same franchise. The best identity change in comics was Wally West replacing Barry Allen as the Flash, and the worst was Barry Allen returning to replace Wally West. 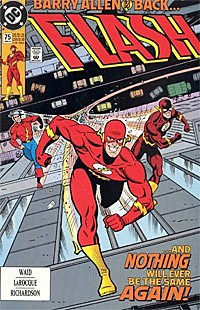 Admittedly, I say that as a guy who absolutely loves the Wally West era of Flash, particularly under Mark Waid. When I was a wayward youth who had given up on mainstream super-heroics for the relatively fresh takes (and far more scantily clad ladies) of books like Gen13. And don't get me wrong, I still have a soft spot for those comics today, even if I do cringe at the memory of passionately explaining to my 7th grade classmate that no, Gen-Active SPBs were totally different from Marvel's mutants.

But Flash was the book that brought me back to DC, and by acting as the bridge to other great '90s titles like JLA, Starman, Impulse (another Waid classic), turned a love of a few specific characters into a love of an entire universe. And everything that's great about that book, everything that made Flash one of DC's most consistently great titles for ten years, is built on Wally West.

The main recurring theme of that book, the idea of the Flash as a legacy and a family, could only happen the way it did with Wally West as the central figure -- or in his case, the keystone. Barry Allen had famously been inspired to take the name "Flash" by Jay Garrick in his first appearance, and the two characters had famously interacted in the stories that helped to create the DC Multiverse, but the unified post-Crisis DCU allowed for something completely different. Jay Garrick was recast into a much more fatherly role for the Flash legacy, and the streamlined universe allowed Waid to create the idea of the Speed Force and recast characters like Johnny Quick and Max Mercury as members of the same legacy, as well as showing how it lasted into the far future with Impulse, XS and John Fox.

And it was all centered not just on Wally West, but Wally and his relationship with Barry.

Unlike a lot of people who favor Wally West over Barry Allen, I don't think the problem is that Barry Allen is a boring character. I mean, he is, but that's not something that can't be fixed by dropping him into a good story. Hell, the Pre-Crisis Wally West was just as boring, if not more, and in stories like JLA: Year One and Flash & Green Lantern: The Brave and the Bold, Waid proved that Barry Allen could be written as an interesting, compelling character who fought crime with as much fast thinking as fast running. So "boring" isn't the problem.

The problem is this: 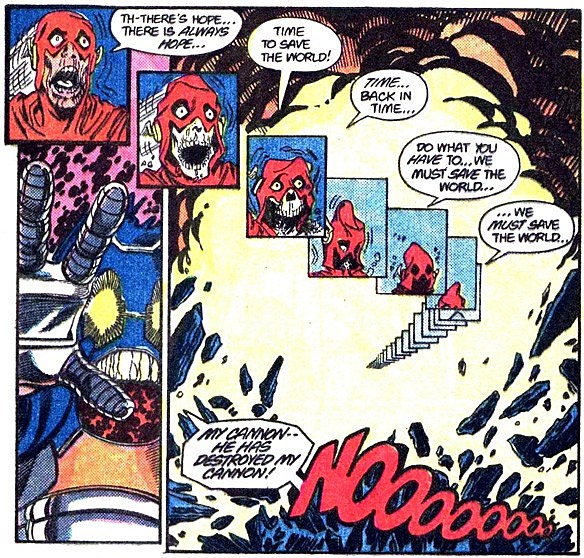 In Crisis on Infinite Earths, Barry Allen dies saving the universe, and that's his defining moment as a character.

It's probably the best death a super-hero could possibly have. Crisis was arguably the biggest story DC had ever done. Everything was in danger on a grander scale than anything before or since, with 40 years of comic book history in jeopardy. And for all the hype that surrounded it, Marv Wolfman and George Perez delivered a comic that ended a universe. Say what you want about the quality of the story, but the tagline was true: Worlds lived, worlds died, and nothing was the same again -- even when a bunch of people came along two decades later and did their level best to make things look like they used to.

And in that gigantic story, Barry Allen -- a character whose book had been canceled due to lack of interest after the notoriously meandering "Trial of the Flash" -- goes out in the ultimate blaze of glory. He sacrificed his life to save everything, and while that's as good an ending as a character can ask for, it's a terrible middle. For one thing, it's a high note that you're never going to be able to top, but more importantly, having him return afterwards invalidates the very idea of his heroism in Crisis.

Last week, I talked about accepting that any protagonist is essentially invulnerable just by virtue of being a protagonist, but at the same time, it's important for a creator to build the illusion of danger. We all know from the start that Robin Hood's going to make the shot, Indiana Jones is going to beat the Nazis, and Superman's going to save the day; it's up to the story to create that shred of doubt that gives us the ability to think that maybe this time he won't. And when you have a character bounce back from the ultimate heroic sacrifice, you cross a line that makes the suspension of disbelief immeasurably more difficult for the reader.

And it's only compounded by the fact that, juding by the 15 years of comics that came after Crisis, Barry Allen was meant to stay dead. If you look at a story like "The Death of Superman," -- in which Superman does not, in fact, die -- the seeds for his return are there from the start. His return is a foregone conclusion that comes off as logical, or as logical as anything involving the phrase "Kryptonian Gestation Matrix" can seem. Barry's death, however, feels more genuine because it was meant to be an end to that character, which makes stories like "The Return of Barry Allen" -- in which Barry Allen does not, in fact, return -- hit harder with more emotional impact.

But the second Barry Allen shows up in his bomber jacket and goes back to punching out Captain Cold, the curtain is pulled back and the fiction is revealed for what it is. The sense of danger is gone, because we've seen him return from dying to save the universe with every hair in his crew cut intact. If you're familiar with what happened in Crisis, and I think it's safe to say that DC's been pretty keen on readers being familiar with Crisis over the past few years, it's nearly impossible to believe that anything could ever have a lasting impact on this character. The illusion's gone.

And what's worse, his return undercuts not just Barry himself, but what Barry means to other characters, specifically Wally West himself. When Barry sacrifices his life in Crisis, he becomes the super-heroic equivalent of a martyr, and quite frankly, he's better and more valuable as the inspirational figure that makes him than as a living hero, because of what that means to Wally.

Basically, what it comes down to is that Barry Allen is DC's Uncle Ben.

One of the best things that Mike Baron, William Messener-Loebs and Mark Waid did with the Flash was turn him into exactly the sort of character that DC needed to make their Post-Crisis universe seem fresher. Stop me if this starts to sound familiar: The Wally West Flash was a younger hero (but one who still had experience from starting out as a teenager) who was characterized by being friendly and quick-witted, who made mistakes in his personal life, but was driven above everything else by an example set by his dead uncle. Whose name started with a B. 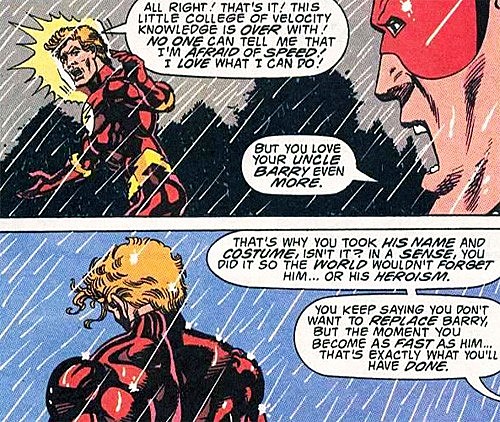 Wally West is probably the best of DC's legacy characters, for the simple reason that the creators of his stories used that legacy to hold everything together. It was his motivation, it was his origin, and it was the standard that he had to honor while simultaneously surpassing it to become his own man, taking on the role on his own terms in a way that still allowed him to carry on a legacy. He was the Flash: The Fastest Man Alive.

But just like how Spider-Man would lose his driving tragedy (or at least have it severely lessened) if Uncle Ben showed up alive and well, Barry Allen's return makes all of that a moot point. The standard set by a man who did the right thing even at the cost of his own life means a lot less if it turns out he didn't actually lose something, and a legacy means nothing if it ends up being handed back to the guy who was meant to hand it down in the first place.

So what do we gain when he comes back? Wally West's development is rendered irrelevant by the fact that he more or less ceases to exist in favor of having a book about guy whose defining moment loses all of its impact. Two characters lose the things that make them great, and get nothing in return, and a book that should always be about moving forward takes a big step backwards.

And now, a few quick questions for The Lightning Round!

Q: If Batman didn't exist, what character would you be the expert on? -- @SorryCurve

A: If Batman did not exist, it would be necessary to invent him.

But failing that, I have read every Punisher comic, and I consider myself to be one of the world's top Jimmy Olsen scholars.

Q: Which superhero is most likely to be totally obsessed with Radiohead? -- @CandyAppleAlly 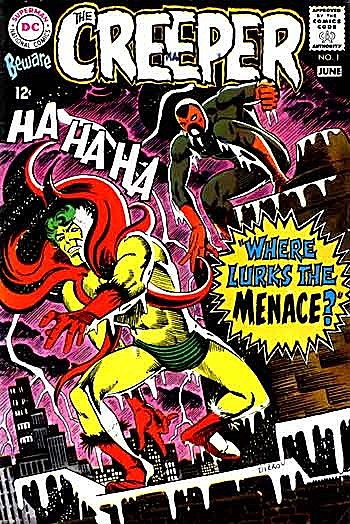 Q: I don't believe I've ever heard your opinion on Mouse Guard. I'm thinking of checking it out. Is it any good? -- Einar, via email

A: I've unfortunately fallen behind lately, but I thought the first few miniseries were great. Compelling story, absolutely gorgeous art, and an interesting take on fantasy themes that did a great job of world-building without seeming obvious about it. Definitely worth your time.

Q: Given your expertise as a Batmanologist and your appreciation for Harry Potter, which house do you think Batman would be in? Really this question is, what do you think is the most important of Batman's qualities: Bravery, intelligence, cunning or...whatever it is that Hufflepuff have? I'm thinking Slytherin myself. As evil as that sounds, the most cunning are the most likely to be victorious due to planning. -- James, via email

A: First of all, Hufflepuffs are defined by their loyalty, and second, as I understand it, Slytherins are defined by ambition more than cunning, and it's that lust for power that led so many of them to side with Voldemort. I'd say that Batman's fairly ambitious -- deciding at the age of eight to end all crime is a pretty lofty goal -- but it's not his defining quality, and a dude who makes a habit of taking in carnies isn't going to last long in Slytherin anyway. Of those four, I'd go with intelligence. He is, after all, the World's Greatest Detective, and his meticulous planning requires an awful lot of thought.

Besides, just look at the dude: 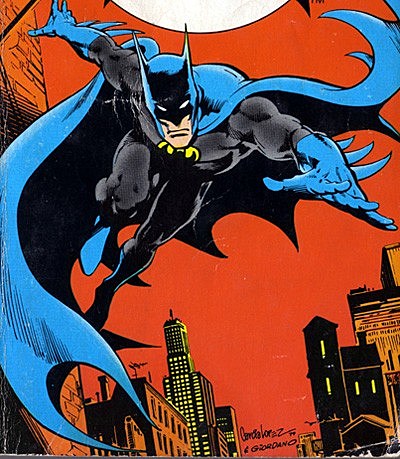