This week, IDW will be releasing "Ghostbusters: Past, Present and Future." The holiday special issue, in which the team is hired by a stodgy old rich man to deal with three spirits that haunt him every Christmas, struck me as strangely familiar.

And no, I'm not talking about the obvious sense in that there's several dozen new reinterpretations of A Christmas Carol released every December. When I first heard the plot summary, I got the strangest feeling of deja vu, a sensation that I'd seen this story before. Thanks to the limitless font of information that is the internet, I was able to verify that I had.

The animated series "The Real Ghostbusters" aired an episode entitled "X-Mas Marks the Spot" back during its first season. Written by "Thor", "The Brave and the Bold," and now "Superman: Earth One" scribe J. Michael Straczynski, who was the series' story editor at the time, the episode told the tale of the Ghostbusters confronting the three ghosts that tormented Ebeneezer Scrooge.

It originally aired almost twenty-three years ago on December 13, 1986. I can't tell you exactly when I first saw it, as I was a small child at the time. Apparently I somehow came to believe that knowing every single detail of how I watched cartoons in the '80s would never be relevant more than twenty years later. I was young and foolish and can only offer my deepest apologies for this careless oversight.

So with the upcoming release of IDW's take on the story, I decided to rewatch the cartoon. Now even without having seen this show in ages, there are many things I could have told you about it off the top of my head, since I can remember details about television shows from my childhood in a way I'd never be able to remember actual facts that professional educators told me less than half as long ago.

For instance, I could have told you from memory that the Ghostbusters were somehow sucked back in time, came upon Scrooge on Christmas Eve and then trapped the ghosts of Christmas Past, Present and Future. And that when they returned to the their own time they found that Scrooge had written a book about his feelings on Christmas which had effectively ended the holiday forever and resulted in everyone saying "Bah, humbug" constantly.

Although somehow even though people didn't observe Christmas, they still knew when it was and Scrooge's book was still being sold in bookstores during the holiday season a hundred and fifty years later. With that fairly specific outline of the story in mind, I pulled the show up on YouTube and had a little encounter with my own Ghost of Christmas Past:

(And here's the second part of the episode, although if you want to really exercise the nostalgia muscles you may want to watch this version with lower video quality that includes the opening credits.)

Now, I'm not going to tell you the episode is by any means a masterpiece, but seeing it again was a pleasant enough stroll down memory lane. And I quickly realized there were some details of the plot I'd forgotten. For example, Scrooge tries to shirk his way out of the bill and then, once the Ghostbusters have left, he steps over to the nearest window, shakes his fist at the sky and declares vengeance against Christmas while speaking in the third person. 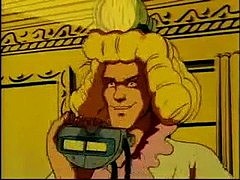 And then there's the part where Egon has to free the three wrongfully imprisoned spirits from the containment unit while Peter, Ray and Winston go back in time again and impersonate the ghosts in an attempt to teach Scrooge the true meaning of Christmas and thus fix the past. In Peter's case, this involves dressing in drag, strapping a View-Master to Scrooge's head and pushing him around in a wheelchair.

I have to admit that revisiting this moment from my formative years made me look forward to the IDW special, and yet at the same time it left me a little worried about it. It's a clever premise, and I'm not bothered by the fact that something similar has been done before. I watched a lot of superhero cartoons as a kid, too, and if anything that made me more interested in deeper interpretations of the characters in films like "The Dark Knight" or books like "All-Star Superman."

But the fact that I was able to clearly remember this episode decades later also means that "Ghostbusters: Past, Present and Future" is treading on my hallowed childhood memories. If it's not done well, this one's going to hurt me much worse than the average sub-standard comic. On the other hand if manages to hit all the right notes maybe I'll still be fondly remembering it decades from now.