When I was a teenager, I thought my boarding school was pretty ominous. It was just a few miles from a famous UFO sighting. We had special evacuation procedures in case the local nuclear power plant had a meltdown. My freshman year, the school was plagued by flood, fire and pestilence (the pestilence was a particularly virulent strain of flu, but after the flood and fire, I was searching the skies for the Four Horseman).

Compared to the eponymous boarding school of Tom Siddell's webcomic Gunnerkrigg Court, however, my high school was the pinnacle of normalcy. As far as I know, we didn't have body-stealing demons lurking through the catacombs or house a secret society of robots. Mechanical birds didn't watch the students' every move. The school didn't sit next to an enchanted forest ruled by the trickster god Coyote. And the faculty wasn't involved in a secret battle between advanced technology and natural magic. 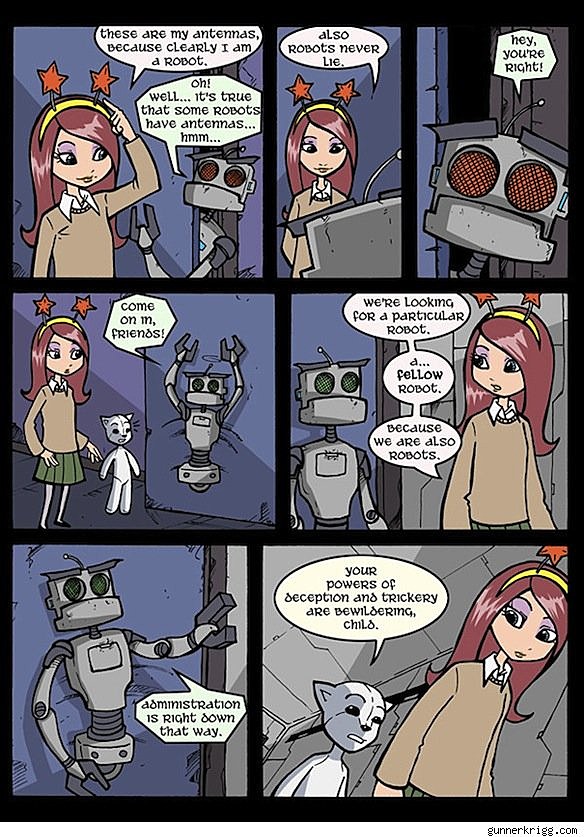 Every good mystical boarding school tale needs an adventurous new student -- a Harry Potter to uncover the secrets of its Hogwarts. Here, our Harry is Antimony (Annie to her friends), a serene old soul who is unceremoniously dumped at Gunnerkrigg Court after her mother's death. The school is vast and strangely empty, but when Annie discovers she's acquired a second shadow, she takes it in stride, using it as an opportunity to delve into the secrets of her new home. The case of the second shadow is happily resolved, but it opens a slew of new mysteries.

Why does the Court have a room just for spare robot parts? What are the malevolent-looking birds that seem to be following her around the school? Why are students forbidden from setting foot on the bridge that separates the Court from the forest across the river? Soon Annie and her technologically minded best friend Kat are poking and prodding at the limits of the Court, learning the secrets of their classmates, teachers, parents and the intersection of magic and machines.

In a post-Lost world, it's easy to be suspicious of long-term mysteries. It's a lot easier to create loose threads than to tie them into neat little bows. The first several chapters of Gunnerkrigg Court are self-contained stories that introduce hints and peeks at the Court's inner workings and Annie's own mysterious past. Gradually, however, Siddell pulls back the curtain on his odd little world. The Court is bastion of science and technology, a place where robots run the halls and children play at making zero gravity chambers and microscopic abominations. Across the river lies Gillitie Wood, a place of shadow people, gods and fairies, where humans and technology are forbidden.

And the strangeness that attracts itself to Annie is linked to her mother, Surma, who was also a student at the Court and straddled the two worlds. It also becomes clear that Siddell has been slowly building small details into his story whose real significance is only realized later in the tale. It leaves me confident that Siddell has a plan for just about everyone and everything eventually, even if it's not clear yet where they'll fit. 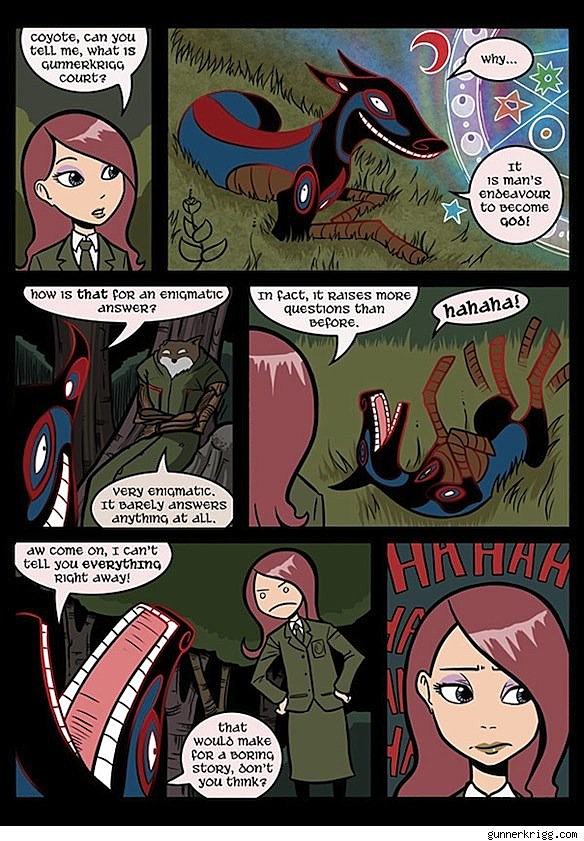 Beyond those mysteries, Gunnerkrigg has a goofy lilt that makes it something more than a Gordian knot of story threads waiting to be untangled. Gunnerkrigg begins with a very young adult feel, both in terms of the art style and the storytelling. From the start, there are sly, silly jokes (Annie finds the spare robot parts in a room labeled "No Spare Robot Parts") and light-hearted story lines. Over time, the story and the art start to grow up. We meet the trickster god Coyote, who rules over the wood and has a talent for making every scene delightfully uncomfortable.

The formerly spooky stories give way to tales of death and revenge. And as Annie starts to come into her own power, her serene facade begins to crumble, and she develops a cruel streak. But Siddell never forgets that his characters are, for the most part, children, prone to crushes and gossip and teasing, and quick to forgive. And while the plot lines may grow darker and deeper, he never strays from all-ages territory. Plus, he still finds ways to break up the more serious arcs with moments of levity. 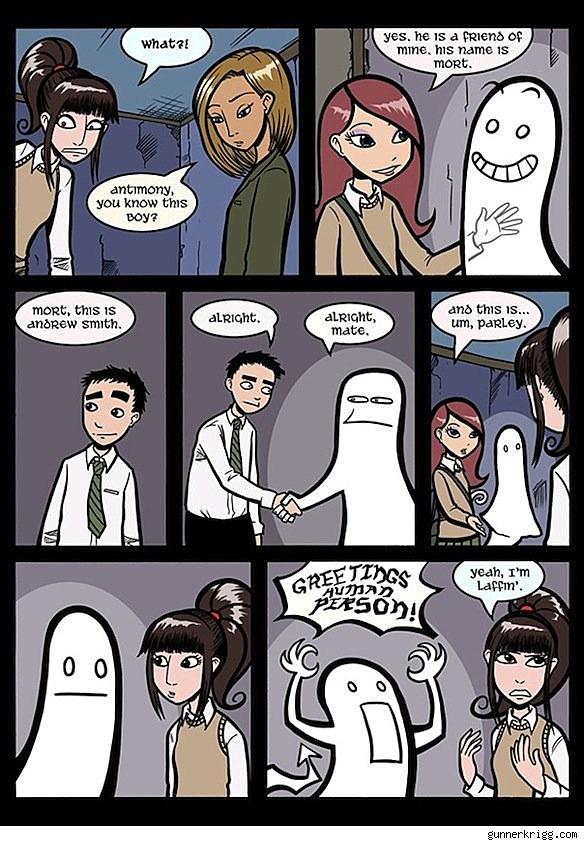 Reading Gunnerkrigg can, at times, be an uneven experience. Siddell falls too much in love with the occasional plot line that is pretty or sad rather than funny and strange. While it's clear that he wants to pursue certain long-running stories and ideas, when he wanders too far from his strengths (or gets too heavy on the exposition), the comic can feel frustratingly slow. Fortunately, in the more recent chapters, he's refocused his energies and steered the comic back toward the student body. Being the good little fictional students they are, Annie and Kat's classmates have begun to explore the secrets of the Court themselves, and Siddell has grown more and more comfortable with their repartee as they've grown into their small rebellions. And we keep finding new surprises inside the walls of the Court -- in-house sea monsters, laser cows and superpowered students. 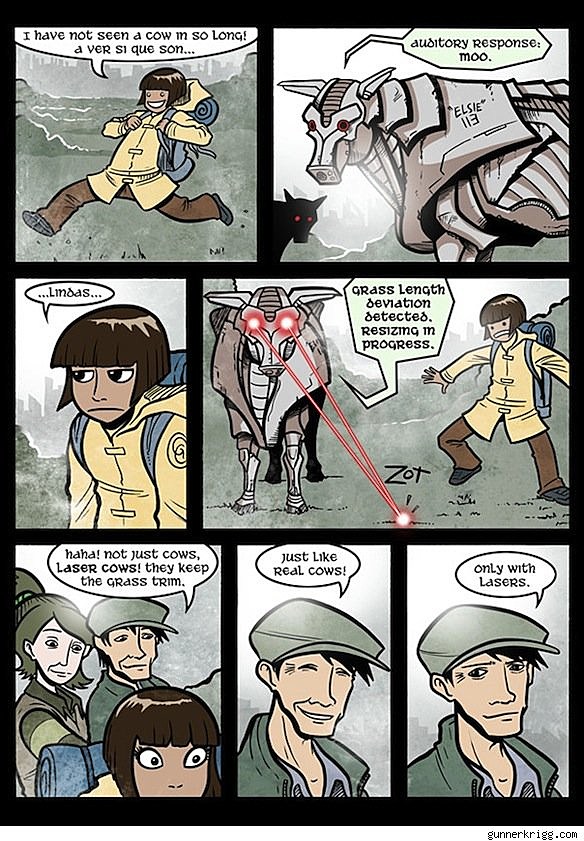 Annie herself holds the key to one of Gunnerkrigg's most enticing mysteries of the moment. She recently spent the summer in the wood with Coyote and his grumpy tree-wolf lieutenant, cut off from her usual friends and allies. She returned leaner and hollow-eyed, but surprisingly mum on her adventures. Never have I so wanted to hear how someone spent their summer vacation.