A: When you're dealing with a pair of second-stringers like these two (get it? Like bowstrings?), figuring out who's more important can be a pretty tough task. Then again, one of those dudes was in a movie that made a billion dollars, and the other has a show on the CW where he fights D-list Batman villains.

So yeah. I guess that settles that. 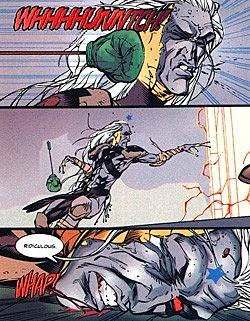 Really, though, Hawkeye and Green Arrow make a pretty interesting contrast to each other. When you get right down to it, it's pretty weird that the major teams of the two superhero universes both have a dude running around in secondary colors trying to shoot people with a bow and arrow, and that's before you get to the part where one of them occasionally has a big green boxing glove at the end of his. Just going by superhero comics, you'd think that being really good at archery was every bit as common as a power fantasy at being able to throw a car or being invulnerable to injuries, and as weird as that might seem, I guess that in a lot of ways, it is.

For both characters, and for most of the others that you see cropping up with similar motifs -- you know, Legolas, Rambo, Hunger Games -- it's all a big metaphor for skill. Aiming at something and actually hitting it, after all, is a pretty difficult thing to accomplish, and the fact that bows date back to before recorded history and are pretty common to almost every culture give them a nice appeal. Even more than that, though, they represent something that other weapons, particularly guns, don't. There's a whole set of heroic imagery that's tied up into them, and for superheroes, it's not exactly difficult to figure out where that comes from. But we'll get back to that in a second.

So let's talk about Green Arrow. Oliver Queen is one of those characters that I feel like I'm a big fan of -- the very first sketch I ever got at a convention was a headshot of Green Arrow by Phil Hester and Ande Parks -- but when I actually stop to think about it, I don't really know if I actually like the character. There are definitely good Green Arrow stories out there; Andy Diggle and Jock's Green Arrow: Year One was one of my favorite comics of 2007, and did a great job of setting up different pieces of his story that would show up down the line. The thing is, I can't really tell you anything about Ollie himself that I find appealing. He yells at Hawkman a lot, I guess? That's pretty appealing.

The more I thought about it, the more I realized that when I say I like Green Arrow, what I really mean is that I really, really like this guy: 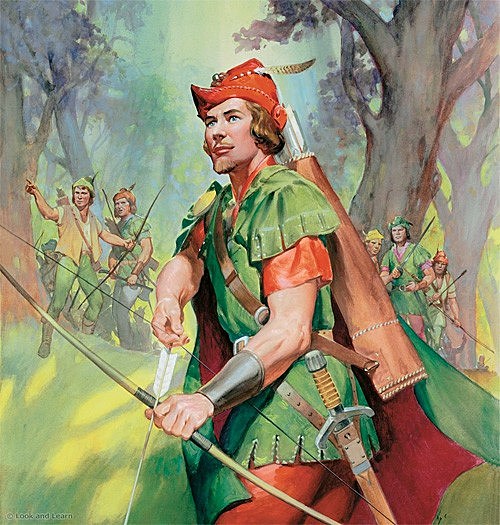 Or, if we're being honest about it, this guy: 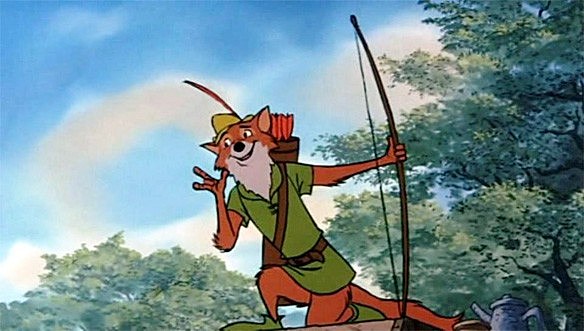 Fun Fact: I am a dude who f**king loves Robin Hood. There are plenty of prototypes from which the modern superhero descends, but for me, Robin Hood's the one who kind of has it all: The tragic origin, the arch-nemesis, the secret headquarters, sidekicks -- he even has crazy retcons, like Maid Marian getting lumped in there to replace his Golden Age Love Interest, Clorinda, Queen of the Shepherdesses. He's one of the original outlaw vigilantes, and there are bits and pieces of Robin Hood in the DNA of virtually every superhero, and not just the obvious ones. There are connections all over the place for that guy, and he's my go-to example of a character who works on the same kind of storytelling principles as superhero comics. I actually think that's one of the reasons why Robin Hood himself has never really had a strong presence in comics when other public domain characters (by which I mean Dracula) have: We've seen what makes him a great character filtered down into others, just as we've never really needed Sherlock Holmes comics when there's already a World's Greatest Detective who's native to the medium.

Incidentally, if anyone wants to rectify that, I have a killer Clorinda, Queen of the Shepherdesses pitch ready to go.

Point being, most of my affection for Green Arrow is tied up in the idea that he's a modern-day Robin Hood, which is one of those concepts that's so self-evident that it had to happen. It's one of the reasons why, personal politics aside, I like the idea of Oliver Queen as the angry liberal who's always yelling about fat cats, since wanting to rob from the rich and give to the poor is right in line with that idea.

The problem is that Green Arrow doesn't really live up to that premise all that often. Instead, since, you know, robbing people with pointy objects tends to be a little more on the villainous end of things, he's usually just a knockoff of Batman. That's especially evident in the '50s when he was running around with an Arrowcar that he and his kid sidekick kept in the Arrowcave -- honestly, the f**king Arrowcave -- but even the darker, grittier version that Mike Grell introduced in 1987's Longbow Hunters followed on the heels of the darker, grittier version of Batman that got started around the same time.

Stripped of that Robin Hood connection, there's not a lot of appeal for me, but in a conversation on War Rocket Ajax a few weeks ago, Josh Williamson brought up the idea that he's the "normal guy" of the Justice League. Again, that's a role that we normally think of Batman filling, but if we're all honest, it doesn't exactly fit, if only because Batman is super awesome at everything. It's kind of his deal. Green Arrow, on the other hand, is only really good at that one thing -- he has the one fantastic skill that defines him, and he's otherwise kind of a mess of a person, picking fights with Hawkman and Green Lantern and eternally screwing up his love life and ignoring his Troubled Teen sidekick. It gives him an interesting character, even if it's not the one that I personally want. 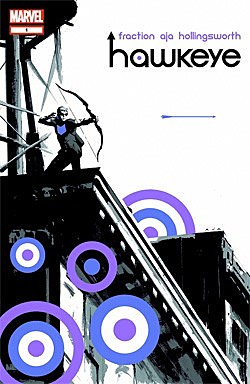 That brings us around to Hawkeye, a character that I've never really had much affection for at all. Part of that is just a result of me never really being a huge Avengers fan, but the idea that Hawkeye filled that same kind of "normal guy" role always felt redundant. The core idea of the Marvel Universe is that all the characters are, on one level or another, normal, flawed people underneath their powers. Even Thor occasionally turns into a guy who has a bum leg (or a frog, or a space horse), so having a guy running around in purple chainmail to hammer that point home never really seemed necessary.

There are, however, a few other elements to Hawkeye's character, and it's pretty easy to see how they all work together. He's not just the normal guy, he's also a reformed villain, which makes him the Avenger with a criminal record. That gives him something to prove, and puts him in a unique position of feeling like the other Avengers are all looking down on him for his past, even though they've accepted him (and gone through their own bouts of being on the wrong side of the law).

When I asked Matt Wilson why he liked Hawkeye to begin with, one of the things he mentioned was that he argues with Captain America, and it seems like that's where that idea has its roots. Hawkeye's a little shadier than everybody else, which puts him in an interesting place and gives him a good viewpoint and a built-in setup for conflict.

When you put those two ideas together, the normal guy and the Avenger with the shady past who makes a lot of mistakes, and then you crank up "normal guy" to "gets the crap kicked out of him on a fairly regular basis but never quits," you've essentially got Matt Fraction and David Aja's current take on the character, and it all really clicks into something that I like a lot. I've compared Hawkeye to The Rockford Files before (as has Fraction, and probably anyone else who's read it), but it's a premise that really works: The ex-con who turned his life around and decided to help people, and has to fight through incredible odds on sheer determination and the occasional sucker punch to do so. There's even a bit of the old Robin Hood stuff in there with the idea that Clint Barton's helping out his neighbors with money that he literally stole from a bunch of deep-pocketed crooks early in the series.

I'm reluctant to dismiss either one of these guys out of hand, because -- as Hawkeye proved -- I'm really just one good story away from liking them a lot. That said, Green Arrow's a character that never really lives up to his potential, while Hawkguy goes way beyond his.

That'll all change when Clorinda hits the New 52, though.