'The Line' opens with Peter and Caitlin discussing Ricky's death. Peter realizes that the girl who's looking for him and his destiny are tied in with Montreal, and resolves to go find Ricky's killer. Caitlin goes along with him vowing to 'Kill the Bitch.' Uh-oh, watch out Veronica Mars.

America's favorite cheerleader Claire tries out for cheerleading and to the extreme dismay of males everywhere, doesn't make the squad. This travesty is enacted because of the bitchy lead cheerleader who informs Claire that she is, in fact, not extraordinary. Whoever said cheerleaders were smart was completely on the money. Sigh.

Mohinder is studying Monica, and Bob enters with the demand to inject Monica with a mutated strand of the virus that kills the heroes. Mohinder is torn, since he has brought them Molly, he has to do what they ask of him or Bennet informs him that he'll jeopardize the project. That, my dear Mohinder, is why you don't sleep with the enemy. OR give them your children. It's novel, I know -- I'm just that smart.

Enter a brand new bunch... The grandmother and grandson, Koyla, leave for a party, while the white-haired man is accosted by Bennet and the Haitian. "Ivan my dear friend, we need to talk." The altercation leaves Ivan on the floor, and me completely flummoxed.

Claire is socially ostracized except for West. She complains to her lovey-poo, who manages to coax Claire into taking the head cheerleader down a notch. This should be interesting.

Maya and Sylar are talking about their powers. Maya can't understand how someone would want to be different, but Sylar charms her, reaching for a little extra something. Ow-ow! Alejandro does not trust Sylar's intentions, but Maya remains adamant that he was sent by god to help them and they must trust him.

Back to the Hiro, Ando and the deciphering of the scrolls. Still kind of tired of the Hiro plot. They are planning a war, and Hiro is concerned for the woman he loves, Yaeko. But with Kensei at her side, she has no fear.

Ivan and Bennet are having a friendly chat, of course -- Bennet threatening Ivan with a memory wipe and carrying it out... It's painfully obvious that Claire's dad is still an a-hole. Go Bennet. After a short commercial break, (thankful for a DVR) we return to Bennet and Ivan. The Haitian has completely wiped all of Ivan's memories of his wife. (Ouch.) Ivan threatens Bennet's family and just when the Haitian is meant to wipe all of Ivan's memories concerning Bennet and his family Ivan offers him a deal. Come back to the company and we'll protect you. Is Bennet is turning to the dark side? Could the painting be making sense?

Suresh is faced with the injection of Monica. In a surprisingly awesome and not wussy move, he can't do it. He effectively quits, smashes the virus, and leaves. 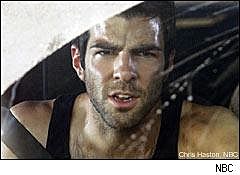 Sylar steers Maya and Alejandro to the border and they're not the only ones there. The border patrol surrounds them, and Sylar encourages Maya to use her power to get them out of that sticky situation. She does it. Sylar's got a girlfriend! Like, OMG, their babies are going to be SUPER adorable.

Claire scares the crap out of the lead cheerleader, by staging her own abduction by West. He swoops her in the air and drops her so she can feign death. West then comes after the HBIC. Nicely done, you two. Seriously.

Meanwhile the head cheerleader is telling the police what happened to Claire, with absolutely no evidence to back up her story. Claire comes out of the shadows and acts as if nothing has happened. She's so cute when she lies.Back to Hiro's story. Yawn. They go to save Yaeko's father. He does not want to be saved, instead, he expresses the need to destroy the clan's guns. Hiro realizes that Kensei's future is to destroy these guns and save Japan. Cue the inspiration music and finish this storyline already.

Bob apologizes to Mohinder for asking him to do such an amoral medical procedure. While he gives Mohinder no reason to trust him, he doesn't really have much of a choice since he made the extremely intelligence absent move of bringing Molly to the company. Bob does mention though, that they'd like to introduce someone to Suresh to keep these kind of hasty and bad communications at a minimum. Hmm, could that be Bennet? Now, that's an awkward meeting. But then again, maybe not ... 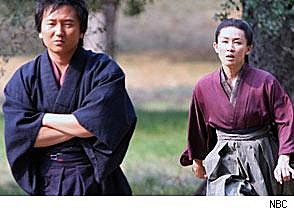 Back to Japan we go! We're in the heat of battle and Yaeko's in the line of fire. Hiro in his love for her (ugh) whisks her away from battle through time to save her. She pretty much freaks and demands to know what Hiro has done. 'How did we get here Hiro?' She realizes that Hiro was the man who did the amazing things. He's the one who saved her, the one under the cherry blossoms. Yaeko asks Hiro if he loves her. He replies "Very much." They kiss. Kensei watches. The scroll ends. Jealousy and betrayal begin.

Alejandro is beating the crap out of Sylar and yet again Maya intercedes. He is upset that Sylar gave Maya the go ahead to kill those people and that she followed his guidance. Maya manages to allow Sylar to stay on, but at a hefty price. Alejandro tells her next time her eyes go black, he will not offer his hand to her to save Sylar. Hmm. Wouldn't that be purposefully killing someone too Alejandra? Now who's in the glass house, buddy? One of the most enjoyable parts of this segment is when Sylar tells Alejandro, knowing he does not understand English, what he's planning to do to the two of them once he gets his powers back. And of course, he shares how he'll train Maya if his powers do not return. Sylar's getting the property complex with Maya. Silly Sylar, don't you know that whole 'women as property' thing is so last year?

Claire is not pleased with her own actions, but they do wind her up on the cheerleading team. So yet again, we've got a cheerleader and a world that could require saving. Nice.

Bennet finally gets the information he needs pertaining the whereabouts of Isaac's paintings and instead of the memory wipe for Ivan, Bennet pulls the trigger. While it is a murder, it's still a pretty big declaration that he's not going to the Company's side.

Kensei confronts Hiro, "First you show me that I can not be harmed, and then you cut me deeper than any weapon could." After Hiro pledges not to love Yaeko, Kensei agrees, then turns on him, selling him and Yaeko out to White Beard. Nice move, you drunk. At least this plot just got more interesting.

Bob drops Monica off at home, and gives her a device with images of how to do pretty much anything. We also

find out that Mohinder's new 'partner' of sorts is a very ill-acting Nikki. She's looking more like Jessica than ever. And she's there to make sure there are no more, "misunderstandings."

Bennet and the Haitian locate the paintings and while they are all in succession, it's near impossible to decipher them. Hiro fighting, a man shooting a gun, Bennet dead... But what do they mean?

Peter and Caitlin make it to Montreal, and they've located the area in the painting. They find a note, that reads: 'You were right about the company, the world's in danger, it's up to us -- Adam.
' "The world's in danger, what am I supposed to do?" With Peter's musings and his profound wish to know who he is, Caitlin and him are transferred to NYC, to a desolate city, where there is an evacuation notice dated June 14th 2008. And the ever dreaded 'To Be Continued ...' graphic. Has it really been an hour already?

No doubt this episode was amazing. We saw the true commitment of heroes who, up until now were ambiguously positioned in the good and evil spectrum, and Claire got to show off her sweet powers in public.So good job all around guys. One thing I've got to say is, is it just me or does the next on trailer for 'Heroes' look absolutely ridiculous? '93% of the World's Population Dead. Evil Has Decided Our Destiny. Good Will Have to Overcome It.' And then Angela Petrelli's voice echoing "You can change history." Honestly, this next on preview looks better than most of the ongoing plots this season. Let's get some urgency going, ladies and gents! It's time to face adversity and save something other than Hiro's extremely drawn out love affair with the Kensei legend. I, for one was completely enthralled by the episode, and now that preview? Wake me up when it's next Monday, folks.

Categories: Television
Comments
Leave A Comment
Back To Top