This week Soldier Zero #1, the first book in the Stan Lee-spearheaded BOOM! Studios superhero line, made its way to the shelves from writer Paul Cornell (Doctor Who, Action Comics) and Javier Pina (Manhunter, Superman). The comic tells the story of Stewart Trautmann, a wheelchair-bound Afghanistan veteran who's trying to readjust to everyday American life when he ends up bonded to an alien soldier and caught up in an interstellar conflict. We caught up with Paul Cornell to discuss the series, 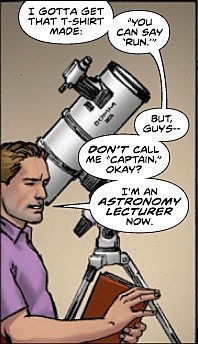 ComicsAlliance: Paul, one of the things I really enjoyed about the issue was the frank look at Stewart's life as a disabled veteran, including the question of sex -- it carried a certain verisimilitude that's refreshing in a sea of after-school special takes. Was this a situation where, like with Faiza Hussain in "Captain Britain," you engaged in some crowdsourcing to make this feel correct? How did that go?

Paul Cornell: Thanks very much. Yes, I talked to some wheelchair users. I learned such a lot. The abuse in the street: couple of times a week. The signs saying "no wheelchairs": real. You'd be amazed. A lot of it comes down to many well-meaning individuals together creating organizational prejudices. It's incredible how much is done for wheelchair users without anyone asking them what they want. There's a kind of deep-rooted denial of personhood happening there. The world, as someone said to me, is the problem, not the chair. I wouldn't dream of saying we've succeeded in presenting that situation, but we're trying.

CA: One of the major marketing points for the book has been Stan Lee's participation in the project's inception. How much coordination occurred with him? Where does his idea end and your execution begin? Is he continuing to play a role in the series and universe as it evolves?

PC: He gave us the initial character and set up, and then came back in to revise that, and to edit the issues after I'd started writing. Loads of dialogue and choices in the first issue are his. He hasn't just waved a hand and declared it okay; he's involved on a daily basis.

CA: You're setting up a new, cohesive superhero universe here, alongside "The Traveler" by Mark Waid and Chad Hardin and "Starborn" by Chris Roberson and Khary Randolph. How much interconnectedness should we expect? Are the three titles just going to share the same backdrop, or can we expect crossovers in the future?

PC: Initially the books stand alone, very much so. But I've just dropped my first reference to our wider universe, and it'll become clear as we go that they all take place in the same world. So you can absolutely just buy one book for the story.

CA: What's it like working with Javier Pina? Are you working full-script or, inspired by Stan, more in the Marvel Method?

PC: No, full script. Javier's given the book an open, big, superhero look which has influenced how I've written it.

CA: How's working on this compared to your work at Marvel and DC? Are you finding you have more freedom to take the story in new directions? Is this your only exclusion from your DC contract, or could we see more BOOM! work from you, maybe in this universe?

PC: This is my only exception from the exclusive. Every company has its own flavour, but the differences are quite subtle. Here what we do is very much down to what Stan wants us to do. That's what we signed up for, after all.

CA: In the first issue, you alluded to Stewart speaking out at anti-war rallies. Will this book contain a political component or will it focus more on spacefaring action/adventure? Or will the two be metaphorically related?

PC: The metaphor is the thing. The first arc is basically one night of an enormous battle, which shows off the town, the supporting cast, and the problems Stewart has meshing his pacifist conscience with a ruthless warrior. Stan's characters always have a conflict inside them, and that's what tells the story amongst the action.

CA: Thanks a lot for your time, Paul!