Convention season is upon us once more, which means thousands of comic book fans will descend on the hotels and convention centers of North America (and the world) to be consumed wholesale by nerd nirvana. They will stand in long lines, they will press through huge crowds, and they will eat a salty pretzel for lunch for three or four days in a row. And there will be panels. And that means Q&A sessions. And that means long, awkward questions from nervous and and overwhelmed fans.

We can't do anything to help with the lines, the crowds, or your sodium intake, but we do want to help make those Q&A sessions a little more comfortable, so we've put together seven simple suggestions to help attendees ask better questions. This makes life better for the questioners, the panelists, and everyone else in the room. Think of it as a little convention etiquette guide, and think of ComicsAlliance as your Emily Post-Crisis.

"So, what I wanted to... oh, first of all, hi, my name is Brett, I'm a really big fan. I wanted... you mentioned earlier how, you were saying about the book, and how it came together, and you said something I thought was kind of interesting, and what I wanted to ask was, I was kind of wondering, I mean, I guess, are you excited? About this project?"

Do you see what Brett's first mistake was? Brett had no idea what he was talking about. Brett did not prepare a question. He didn't actually have one. He just really wanted to ask one.

If there's a golden rule of Q&A etiquette, it's that you have to know what you're going to say before you open your mouth. That seems obvious, but anyone who has been to a panel has seen questioners who stood up with only the vaguest shape of a question in their head and no idea how to get it to reach their lips.

There's an easy solution to this problem: If you want to ask a question, write it down. If you don't have a pen and paper, compose your question on your phone. That doesn't mean you have to read your question --- doing so can look stiff, and if you're looking down, no-one can hear you --- but it will ensure that your question has focus and form, and you'll feel more confident if you can look down and double-check what you wanted to ask.

2. Don't Talk About Yourself

"Hi, I'm Jenny, I don't know if you remember me, but I interviewed you in Portland for my podcast, and I gave you a piece of my fan art, and actually I have another piece I wanted to give you later if that's OK? When we talked last time I asked you about your influences, and I just wanted to follow up..."

Anyone familiar with the Nerdist Writers Panel podcast will have heard host Ben Blacker's exhortation, "Remember, questions begin with a 'W' or an 'H,' not with an 'I'."

Now, sure, questions can start with a lot of different letters, including 'I' (as in 'Is' or 'If'), but it's a good line that makes a great point. When you ask someone else a question, it is so very not about you. In most cases, we don't need to know anything about you. We don't even need to know your name, though simply introducing yourself is a great way to center yourself before you start. 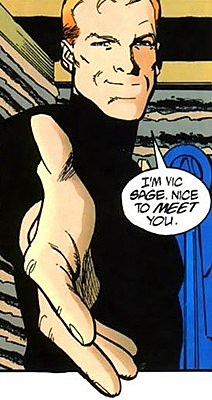 We all have egos. Some of us are a little more generous with them than others. Holding the microphone at a Q&A should not be regarded as an opportunity for you to hype yourself, your career or your website. It's also not an invitation into the secret chambers of the comic industry, so don't ask anyone to read your script or review your portfolio. Either there are proper channels for that, or there's a good reason why there aren't. And holding the microphone does not give you a special connection to the panelists. You are not going to make friends with someone by asking them a question at a convention.

I need to restate that, because it's awkward to watch and it happens all the time, and everyone can see what you're doing. You are never going to seduce or enrapture the panelists by asking them a question. They are not going to pick you out of the crowd like Courteney Cox to do the Carlton with The Boss. I don't mean to break your heart, but if the panelists need to be reminded who you are, it probably doesn't matter who you are. No-one's mother ever goes up to the microphone and says, "Hello, I'm your mother, I gave birth to you and raised you, and I have a question about Batman."

And don't mistake the fact that the panelists may be looking at you when they answer your question as a connection or an invitation to a conversation. They're just being polite. I realize this is a special moment for you, but there are hundreds of people in that room, and none of them are there because of you.

"Hi, I know you make autobiographical webcomics, but I was wondering; if you were a superhero, what would your super-power be?"

I know that this question has actually been asked, because I was there, and you could almost see the frost forming on thee panelists' faces.

When a group of people have worked hard to establish their creative voices outside the dominant genre, asking them a question about the dominant genre is a little rude, especially when there are plenty of other panels where all the questions are about superheroes. No-one ever goes to the DC panel and asks the writer of Batman, "If you were doing an autobiographical comic, how would you explore themes of existential anxiety while recounting your break-up with your high school girlfriend?"

Look at the title of the panel. Read the description. Listen to what everyone is saying. Your question should always come from there.

"You represent mainstream media and your work embodies American cultural imperialism. Do you ever feel any guilt about this?" 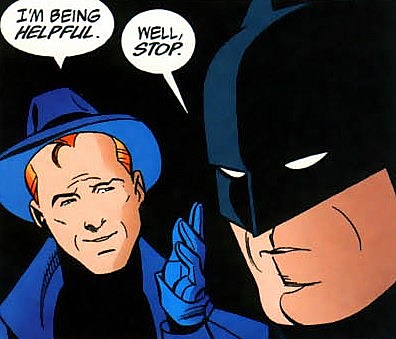 Remember that the people on a comics panel are not politicians, and you're not a hard-hitting news journalist. You might look at an editor and see the face of the industry, but editors look at the industry and see something beyond their control. So be considerate, and handle tough questions with care. If you accuse the panelists of being the person you think they are in your head, they're not going to recognize that person, and they're not going to be able to answer you.

"I know I already asked a question, but can I just ask a quick follow up?"

If the moderator cuts you off, it's because you're sucking all the oxygen out of the room. It's tough love. Accept it. If the moderator doesn't see you, don't take it personally, because it isn't personal. Sometimes the person with their hand up the longest doesn't get called because they're sitting in the wrong spot.

The moderator's job is to make the panel as interesting and enjoyable as it can be for the maximum number of people. To do that, they need to control the room, and you need to respect that. 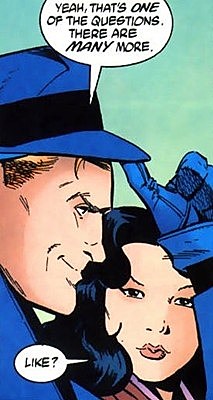 "What are your favorite types of stories to write?"

"I mean, I know you've done a lot of superhero stuff, and some horror, and some sci-fi, and I know you started out doing small press crime noir stuff, so I was wondering if that's where your heart is?"

OK, that's a little more background than the question really needed, but---

"And when I say favorite, I guess I mean, what are the stories you really enjoy writing? Like, if you could just pick one type of story to write, what would it be?"

All right; shush. You were done when you hit the first question mark.

Here's a secret to remember. You don't have to keep talking until the panelists take over. If they take a moment to think, that's allowed. If there's a pause, you don't need to fill it. Don't start reeling off examples to illustrate your question because you think they didn't get it yet. If you haven't made your point, the panelists will ask for clarification. Keep it short, and don't be afraid of silence. 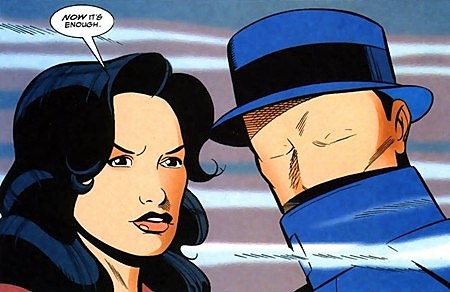 Asking a question is a performance. It's a short one, but it's still a performance, and stage fright is perfectly normal. For some people it's chronic, and everyone around you needs to respect that and give you time to get your question out.

If you're struggling, a bland phrase like, "Hi my name is", or, "Thank you so much for coming," or, "I love your work," may be useful, because it can buy you a second to collect yourself. So say hello. Pause. Take a breath. And ask your question.

And breath out and listen to the answer.

You've asked your question. That's all you need to do. You're done.

This article was originally published July 11, 2012.

Filed Under: eccc, fan expo, nycc, SDCC 2012, Sdcc2012
Categories: Conventions, Culture, Humor
Comments
Leave A Comment
Creating A Space to Strengthen the Community: VanCAF’s Andrea Demonakos on Cons, Creators, and Fans
All The NYCC 2016 Comic Toy and Collectible Exclusives: What’s There and Where to Get It [NYCC 2016]
Weekender: Zunar, Koyama Press, and Jess Fink’s Sexy Robot
Mondo Has A New ‘The Dark Knight’ Print By Jock Available At Emerald City Next Weekend
Reinventing the Superhero: Julie Kerwin Talks ‘IAmElemental’ and Empowerment for Girls
The Best of Both Worlds: Creating a New Character for Marvel’s Contest of Champions [Interview]
Exceeding All Expectations: Talking ‘Star Wars’ Card Trader With Topps [Interview]
Go Hero and ARH Bring Frazetta and More to Life at NYCC
A Good Problem to Have: Hasbro Talks Star Wars Black Series at NYCC [Interview]