A Canadian Health organization has a new approach to sex education: A superhero sex ed video game intended for a "mature youth audience" that parodies everything from "Batman" to "Sin City." Check out the Condom-Signal lighting up the sky in the title screen! (Some NSFW images follow.)

In the game, you play as a member of the Sex Squad, "an elite team of superheroes dedicated to keeping the citizen of Sex City safe from STIs." Members include the abstinent Wonder Vag, the sexually active Power Pap, Captain Condom, and Willy the Kid, whose power is, uh, "Massive Rock Hard Strength." The team's nemesis is the "Sperminator," a former Sex Squad hero who has turned evil because of an untreated STD, and looks like a lucha libre wrestler in a Speedo. Also, his hands are giant penises. That shoot sperm at you. 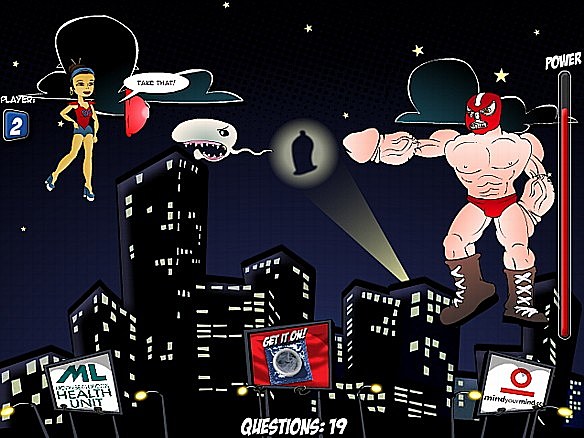 Answer enough correct questions, and the power of your knowledge about sexual health defeats the Sperminator, who reverts back to his former heroic self.

While there's certainly a very high camp factor and the production values aren't tip-top, it's always good to see health organizations trying to educate teens about how to protect themselves sexually, debunking crazy myths, and addressing the issue of a sex by being something other than completely academic or somber. A for effort, guys. And bonus points for coming up with a character design for a villain that's actually crazier than Swarm.