Q: With regards to recent spoilers, from Marvel and DC, when was the first time you were spoiled on something major? How did being spoiled affect your enjoyment of the story? -- @fixbane

A: There's nothing that gets comics readers riled up quite like spoiling a plot twist before they get a chance to read it, and there's a pretty good reason for that. The entire purpose of reading is to have an experience, to thrill along with the narrative and feel the surprises and turns of the story along with the characters. Taking that away can cheapen things, and in some cases, it flat-out ruins 'em. But on the other hand, it's entirely possible to walk into a story knowing exactly how it ends without hurting the experience at all.

I know that first-hand, because the first time I ever got spoiled on something, it was one of the biggest plot twists in the history of comics: I got spoiled on the end of Watchmen. It happened when I was reading an issue of Wizard, and it's not really the kind of thing where I can blame them for ruining the surprise. This was, after all, 1995 or something, and eight years is a pretty respectable amount of time to wait before you go around discussing the end of a book that pretty much everyone reading comics had already read. I was too young to have picked it up when it was coming out, so really, it was the first time I'd heard of Watchmen at all.

For all of Wizard's many sins, I have to credit it with introducing me to a lot of great comics when I was a teenager. For someone whose local comic shop was really just a side business that supplemented a focus on used romance paperbacks staffed by two scowling, middle-aged shopkeepers, it was really the only source of recommendations that I had. This particular issue had one of those frequent articles about the Ten Greatest Graphic Novels Of All Time, and when the entry came for Watchmen, this was the panel they used to illustrate it: 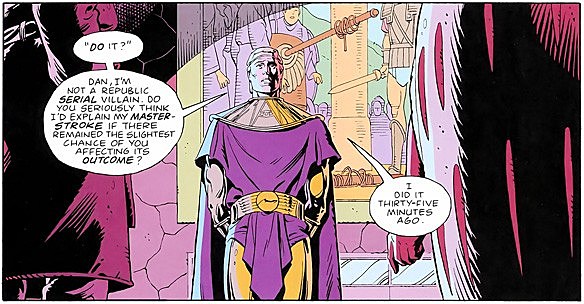 Incidentally, if memory serves, Watchmen ended up ranking at #2, right behind another book I'd never heard of called The Dark Knight Returns. For that one, they pulled a panel of Batman kicking a dude in the stomach so hard that it broke his back and another panel where he kicked Superman in the face while wearing boots with spikes on the bottom, and 13-year-old Chris thought that was rad as hell. Without that article and those two images, it's not really exaggerating to say that my life might've been completely different, with a job other than bitterly telling people why they should and shouldn't like things. Thanks, Wizard!

Point being, the first time I ever even heard of Watchmen, it was in the form of a 200-word plot summary and a panel that blew the Big Reveal. Still, it was enough to make me want to buy those books to see what they were all about, and that's exactly what I did the next time I saw them in the store. I went into Watchmen knowing full well that Ozymandias did it 35 minutes ago, and it didn't change the fact that I loved every bit of that story.

Of course, it goes without saying that Watchmen isn't exactly your average comic book, but it does illustrate a point about spoilers. I could tell you exactly how the plot resolves, that -- spoiler warning! -- Ozymandias killed the Comedian and then threw a psychic squid at New York to end the cold war, and that Dr. Manhattan vaporizes Rorschach to keep him spilling the secret, and I could even tell you that Laurie's sleeping with Dan Dreiberg... 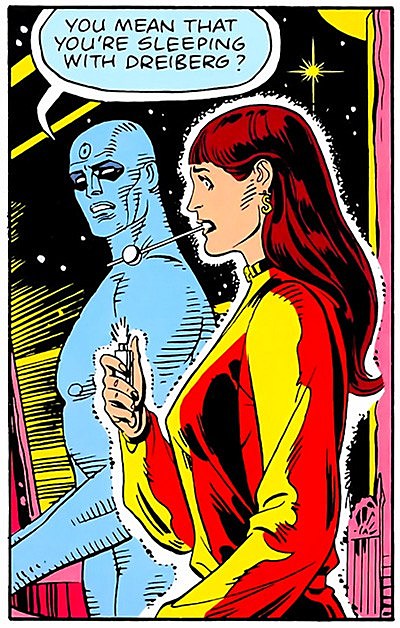 ...and none of that would really change what you get out of reading Watchmen. All the plot beats and events of that story are nothing without the craft that goes into it, and even if I told you about all that stuff -- the way #5 is laid out with complete symmetry around the center spread and how that's actually a false midpoint for the story that serves as a red herring, how Dave Gibbons was so consistent with his art that Dan has stains on his wall that are in the same place for the whole book -- and it's still not the same experience as reading it. There's so much there to get that knowing what you're in for doesn't take a whole lot away from the work.

It does, however, change the way that you read it, and there's a big difference between being surprised by a plot twist and actively looking for the threads that are going to end up pulling it all together. You're essentially doing your second reading first, and when you have a book that can hold up to a second (or third, or fifth, or twenty-sixth) read, that's fine. But when it's not, when the twist is the primary concern instead of what leads to it, the experience suffers. A spoiler takes away the fun thrill of being surprised, and it's frustrating when that's the enjoyable part.

It's easy to say that a spoiler shouldn't matter because it's the journey to whatever's being spoiled that makes things worth it, and in some cases, that's true. It might even help -- if I tell you that (Spoiler Warning!) Dumbledore's going to die at the end of this book, and you're emotionally invested in that character, then there's a good chance you're going to have a sense of dread that just builds and builds as the actual event draws closer. As a reader, you're fundamentally a passive observer, and there are plenty of stories that start off by revealing a piece of the climax and preying on that fact that there's nothing you can do to stop it from happening.

The thing is, superhero comics are weird. I mean, they're weird in a whole lot of ways, but particularly in that they're -- oh brother, this is going to get pretentious but I promise there's a hair metal song later to make up for it -- a long-form sequential narrative that's never really meant to end. The primary goal of almost every comic is to get you to buy the next one, and the way to do that is to do something unexpected that makes you want to find out what's going on. You have to hit those plot twists every 20 pages to keep readers interested so that they come back next month, because if they don't, there's not going to be a next month for this comic. So as readers, we're trained from the moment we start reading to value that surprise because that's what keeps us going. 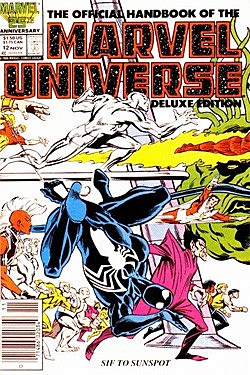 At the same time, superhero fan culture is built around knowledge to a pretty huge degree. For whatever reason, a lot of us get into this stuff obsessively, poring over facts and issue numbers so that we can know more -- and believe me, I am right there with everybody else. That's one of the great things about superheroes as a genre, that they've flourished in these bizarre shared universes that are full of pieces that get picked up, dropped, wiped out of existence, brought back, changed, and hammered together to fit. Making sense of it all is (for me, anyway) one of the most fun parts of being a comics reader. It's why books like The Official Handbook to the Marvel Universe and Who's Who were so popular, because they put all that stuff down in stone so that it can be referenced. And then made immediately obsolete the next time that character shows up.

For some readers, having that knowledge becomes more important than reading the story, even if it's just because keeping up with everything is too expensive. How many people decide to catch up with plot summaries on Wikipedia, or highlight reels made up of scanned panels on websites, or even just by reading reviews on America's Most Beloved Comics Websites? In the end, you end up with the same bunch of facts.

The thing is, when you're dealing with stories, knowing what happened is never as important as knowing why and how. A great premise that's not done well is a bad comic, and a premise that sounds dumber than a sack of doorknobs -- "man dressed as bat punches clown" -- can be amazing. If a story's not done well, then there's no amount of surprise that's going to save it, and if it's good enough, no spoiler is going to completely ruin it.

Still a dick move, though.

A: Let me ask you a question, son. Can you listen to a song that rocks this hard and not think the movie it's about is "worth watching?"

Because if you can, you and I will never understand each other.

Q: If someone wanted to know how big a copy of 50 Cent: Blood on the Sand is, what would you do? -- @daveexmachina

A: I would take a picture of it next to a second copy of 50 Cent: Blood on the Sand.