Q: Which superhero's superpower origin (how she or he got abilities) is your favorite? -- @cabinboy100

A: Origins are always pretty interesting, but focusing on the particular mechanics of how someone got their powers or abilities makes things a little trickier. I mean, really, if you've read this column before, it shouldn't come as much of a surprise that my all-time favorite origin story is Batman's, thanks to all that stuff about childhood fears and determination that I've been through before, but when it comes to how he actually became a vigilante? The dude just does not measure up. 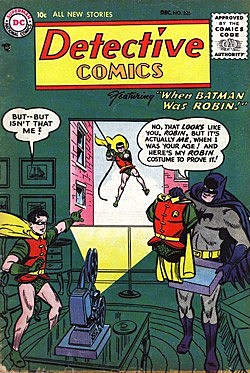 I know a lot of people are keen on it, but for me, the part where he's traveling around the world learning how to do karate and throw little metal boomerangs is easily the least interesting part of Batman's story. It just doesn't matter. You don't gain anything by actually presenting that stuff that you don't already have by just saying "and then he went around the world and learned a bunch of stuff." Batman, like Sherlock Holmes before him, is the kind of character capable enough at what he does that if you know something, it's pretty safe to assume that he knows it too. If he needs to know an obscure tidbit or the counter to a rare kung fu style for the sake of a story, then he does. Spending time justifying it just detracts from the adventures he's having now that should be the focus.

Case in point: 1955's "When Batman Was Robin" from Detective Comics #226. This was actually one of the most influential stories on me when I was a kid, in a roundabout kind of way. The events were recapped in about two pages in Untold Legend of the Batman -- the comic that introduced me to Batman's history and set me on the path of professional Batmanology -- and they always stuck out for being one of the single weirdest parts of his origin. But there, at least, Len Wein and John Byrne tried to make it all make sense in the context of the larger origin story.

The original story by Ed Hamilton, Dick Sprang and Charles Paris, however, has no such concerns. It starts with Batman getting a package in the mail. Or rather, Bruce Wayne gets a package that turns out to to be for Batman, making it clear that someone is fully aware of his secret identity:

The person in question turns out to be Harvey Harris, an ace detective that Bruce Wayne idolized as a boy and, as it turns out, the person who trained him the fine art of sleuthing.

Quick sidenote about Harvey Harris: He turns up again in a post-Crisis story of Batman's training years by Mark Waid, Brian Augustyn, Val Semeiks and Michael Bair that I actually like a lot because it's about Batman being a complete badass and fighting the KKK -- 1989's Detective Comics Annual #2 -- but I've always thought he had the potential to be a much bigger piece of the DC universe than he ever actually was. I mean, he was the guy who taught the World's Greatest Detective, and with all the stories that flashed back to the past in books like Starman or JSA, you'd think he would've come up more. But then, I guess that's what happens when your first appearance starts two days after you die.

Anyway, Batman realizes the package is from Harris because it has a return address clearly stamped on the label contains an old Robin costume from long before Dick Grayson took up sidekickery. Brucie, you got some splainin' to do.

Cue flashback, where we learn that Bruce's hero worship of Harris was so strong that he decided to ditch his maid and butler and go learn how to be a detective. And he decides this, of course, because his parents are... on vacation. 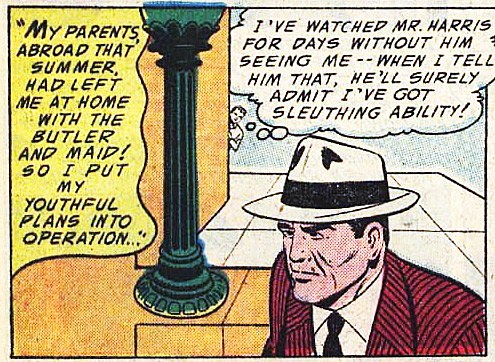 For those of you keeping score at home, this is the moment that this story starts to go completely off the rails. It's a story of Batman's origin that actually takes place while his parents are still alive, to the point where you could read this entire thing and never realize that he's Batman because his parents were murdered. I'm not sure if that's a weird mid-'50s Comics Code thing where they were leery of talking about, you know, a kid's parents being shot down in cold blood in an alley, but the overall effect is weird. Even the '66 TV show threw a line about his parents in the first episode just to get it out of the way, but here? Nothin'. Bruce Wayne really wants to "battle law-breakers" when he grows up, and while I guess that's a pretty admirable trait, he doesn't actually have much a reason for it. He's essentially just learning to be a detective for the hell of it.

The catch is that for some reason, he doesn't want Harris to know who he really is, presumably because he's planning for his future as a masked vigilante well before he has any reason to do so. So to that end, he decides on a disguise, and we get a panel that almost collapses under the weight of its own innuendo: 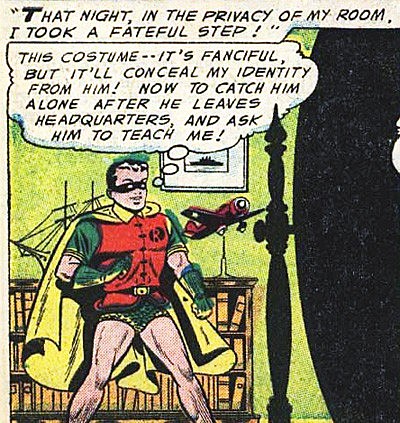 We've all been there, right? In the privacy of our own rooms, just you, a fanciful costume, and the glue from our model airplane? Just me? Best to move on.

Because this is a comic drawn by Dick Sprang, Young Bruce ends up impressing Harris by dropping a giant novelty bell onto a thug that was setting up an ambush. Harris is so impressed, in fact, that he agrees to teach Young Bruce -- who he has nicknamed Robin due to Bruce being "as brilliant as a robin redbreast in that costume," because of course he has -- the ins and outs of crimefighting.

But while the teaching is going on, Harris is trying to get some deductions of his own: 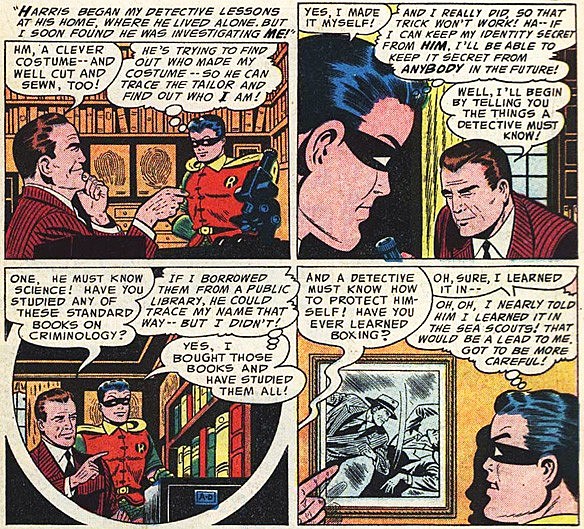 I'm completely not all that famliar with the Sea Scouts -- this may come as a surprise considering how much of my youth was devoted to comic books and video games, but I was never much of a joiner -- so in my head, Batman learned how to box by spending some time with the Sailor Scouts instead. Say what you want, but a miniskirt and tiara would be a step up from that Robin costume.

From here, the story shifts to Harris and Li'l Wayne tackling a case together. And in order to show us this thrilling chapter of the Caped Crusader's origin, they have chosen quite possibly the worst crime they could fight: A bunch of rich old white dudes with collections of expensive but ultimately useless things are being threatened for protection money. 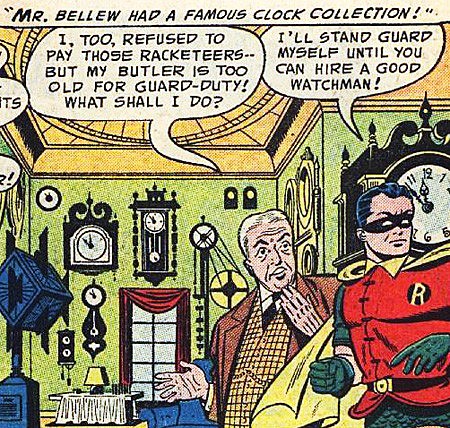 Not to get too proletarian here, but when your driving conflict is that your butler is too old to serve as a guard, meaning that you'll actually have to spend money and hire a guard rather than jetting off to Sweden for a rare 19th century stopwatch, it's pretty hard to feel sympathy. Just sayin'. And it only gets worse, when one of the collections that Harris is staking out turns out to be Thomas Wayne's coins. At this point, It is seriously a slightly more action-packed installment of Richie Rich.

Eventually, though, Bruce and Harris prevent the revolution from happening and everything works out more or less okay for the Establishment, give or take a few model riverboats. Thus, after exactly one case, Bruce is an expert detective with confidence that he'll be able to keep his secret identity.

See, as it turns out, his deception wasn't quite as solid as he thought, as revealed... from beyond the grave! 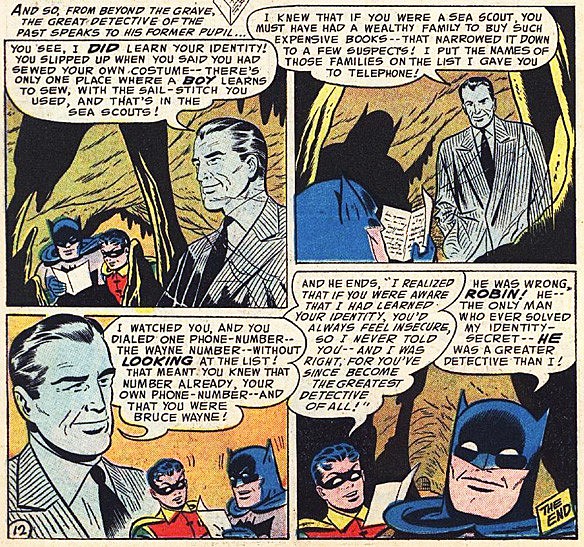 Yes, Harvey Harris knew all along, he just let Bruce think that he didn't. Because building up the confidence of an eight year-old is always better than, you know, giving him a tip that might help him avoid being instantly murdered should his secret identity ever get out when he's a vigilante.

Now, I realize that none of this actually answers the question you asked, but it does point to what I think is a key point. A lot of the time, the best origins for super-powers or abilities are the ones that are the simplest, or the most vague. Radioactive spider. Earth's yellow sun. Training. Hell, Marvel has made made millions, if not billions of dollars over the years just by figuring out that the word "Mutant" means that you don't have to explain their powers at all. They dispense with the detail so that you can move directly into the action.

There can definitely be great stories about someone figuring out the where and why of their powers, but for each one of those, you get the story above, or, say, mystical spider-totems. A story where trying to explain and fill in those gaps actually makes things worse.

That said, there's one super-power origin that hits that balance perfectly. My favorite: Iron Fist. 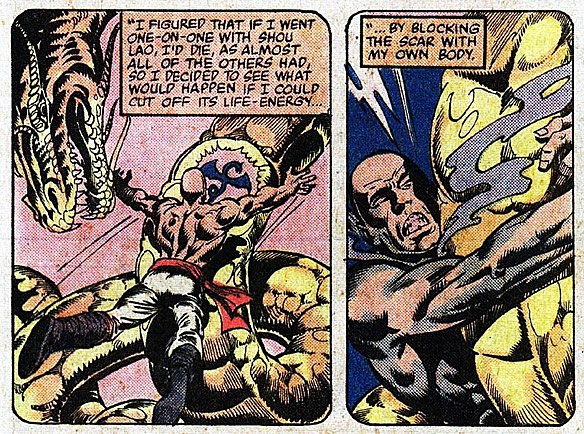 That dude bear-hugged a dragon until it died and then got mystical kung fu powers from its immortal heart. That is rad.