Q: Tell me something about some manga that you're into. -- @hermanos

A: When I put out the call for Ask Chris questions this week, ComicsAlliance contributor David Brothers popped up with this one, and even though it's not actually a question, it got us talking. See, the first thing that popped into my head when asked about a manga that I like was Kenichi Sonada's Gunsmith Cats.

And the first thing that popped into my head when I thought about that was that when you get right down to it, that comic is problematic. 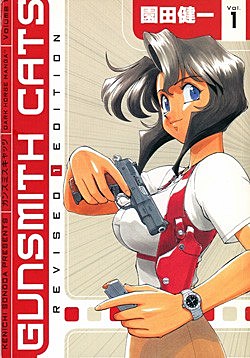 Don't get me wrong: Gunsmith Cats is hands down one of my all-time favorite comics. Sonada is an absolute master of storytelling, and any artist with designs on doing sequential action could do a hell of a lot worse than to study his work to see how he pulls it off. His fights are unbelievably fluid, and he's one of the only people in comics who can pull of a car chase that's thrilling and cinematic, something most other artists have written off as impossible.

And as a writer, his character work is pretty solid, too. The stars of his stories have clear motivations and defined personalities that seem almost effortless in how quickly they're established. I'd even go so far as to say that Rally Vincent is easily one of my favorite female leads in comics. She's sharp, competent, fun to read about, and even with Sonada's considerable emphasis on sex, she even has the remarkable (for comics) tendency to dress halfway practical for running around shooting things.

If you're not familiar with it, the back covers of Dark Horse's omnibus volumes describe Gunsmith Cats as a comic about "two teen girls running a weapons shop in Chicago... but they have a side business as bounty hunters!" 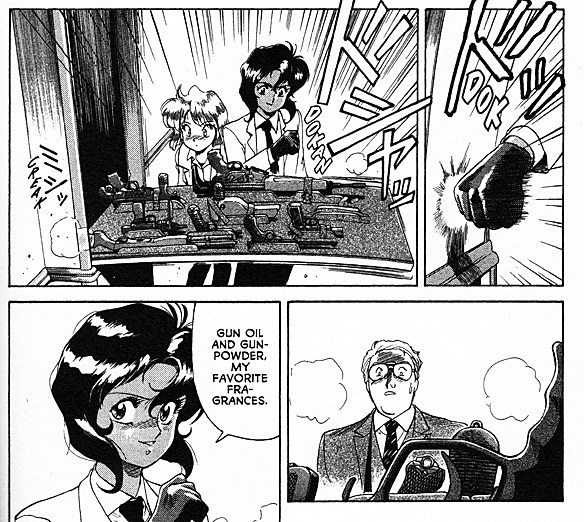 What Gunsmith Cats is really about is exactly three things: Guns, cars and pretty girls in elaborate hosiery. On Twitter, Bryan Lee O'Malley referred to it as being "pure id," and he's not wrong. The entire series is based around Rally running around in her underpants, getting into illegal road races in her '67 Cobra and elaborate shootouts that put John Woo to shame with their creative staging and innovative gun trickery. Gunfights aren't just limited to people shooting each other, although they definitely do that a lot. Rally's signature trick is blowing off a bad guy's trigger finger, but there's also a great scene where a dude grabs her from behind and she fires off two shots, angling her gun so that the spent cartridges burn his face. It's pretty awesome.

But what really marks the book -- and in a lot of ways, what makes it great -- is Sonada's downright fetishistic attention to detail. It's not just on the hosiery, either, although the fact that he never passes up a chance for an upskirt shot makes it abundantly clear that he slaves over those particular details as well. It's the exhaustive research that goes into the guns guns and cars around which the series revolves. Nobody drives a car in Gunsmith Cats, they drive a 1967 Shelby Cobra GT500 or a BMW 2002. Nobody uses a gun, they use a 9mm CZ75 or a .45 Colt Lawman with a 4" Bull Barrel. And Sonada draws them all with a staggering amount of accuracy.

Of course, that level of attention to detail occasionally gets in the way. As much as it's in character for Rally, a professional gunsmith with an orgasmic attachment to firearms, to spent a whole hell of a lot of time talking about the pistols she's selling... 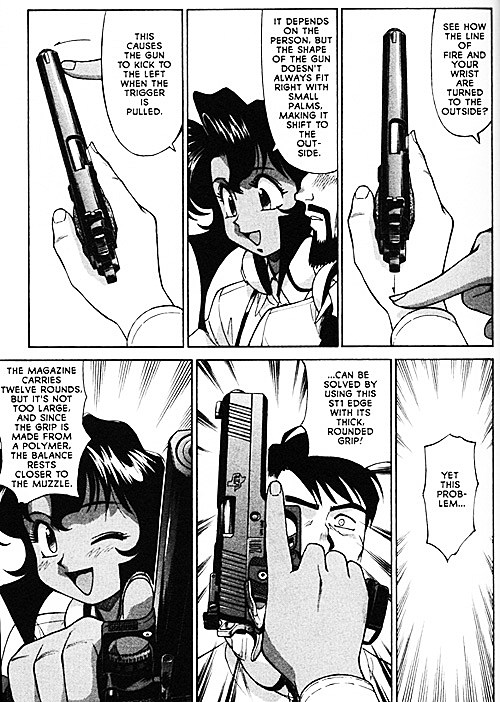 ...it stretches things a bit when people start critiquing each other's choice of sidearm during a shootout. Admittedly, I've never actually been in a shootout, but I have sincere doubts that the parties involved usually spend a good amount of time debating whether a smaller grip is worth the tradeoff in magazine capacity.

But at the same time, that's kinda what I love about this book. I mean, I'm a guy who loves Punisher Armory, a comic book published by Marvel that was pretty much nothing but 32 full-page advertisements for guns, knives and body armor as narrated by one of their most popular characters every month. As much as I'm leery of them in real life -- the result of a childhood spent reading Batman comics, I'm sure -- I find guns to be pretty fascinating, and getting information about how they work mixed in with a big action story is a pretty good way to go about it.

No kidding: if you ever hear some guy at a comic book or anime convention opining on how walnut is unquestionably the best wood for pistol grips, I will guarantee you he learned that from GSC.

Plus, the fact that Sonada strives for realism (or at least a semi-plausible action movie facsimile thereof) makes it absolutely fantastic whenever Bean Bandit shows up. 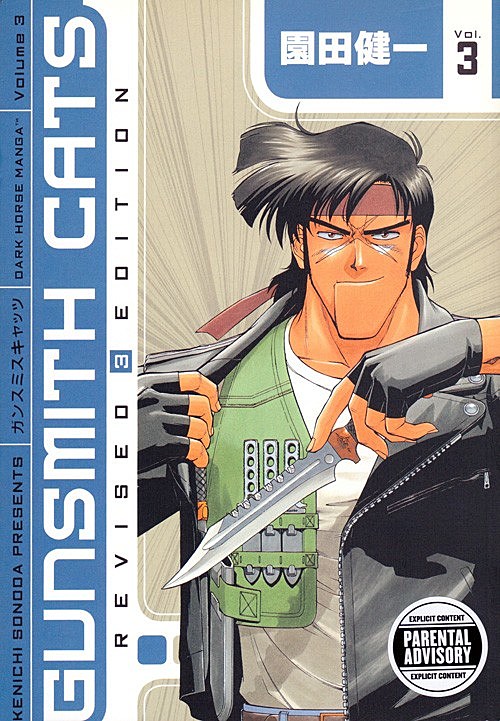 Bean, alias Road Buster, is an earlier creation of Sonada's; Gunsmith Cats is actually a spin-off, with Rally Vincent created as a bounty hunter trying to track him down. He's a transporter, and probably one of the most over-the-top action characters ever created.

Seriously, this dude is like the Dolemite of manga, always punching through bulletproof glass, cutting shotguns in half with a pocketknife, or catching a rocket-propelled grenade bare-handed while driving down a highway at 200 miles per hour in his custom-built car. 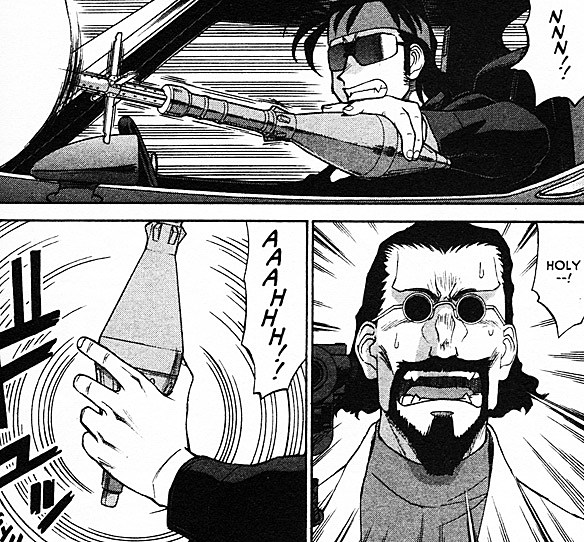 He then threw it back at the guys who shot it at him, at which time everyone exploded.

Every time he shows up in a story that's even slightly based on reality, it's like Chev Chelios from Crank kicked his way through a wall and busted into an episode of Law & Order. He's great.

So then, what's the problem? Well, it's not emphasis on sex, at least not entirely. I mean, for one thing, it's pretty difficult to get worked up about Rally having her skirt cut off by a plucky young lady with a switchblade and having to run around in her unmentionables when she's also shooting people in the head all the time, with the accompanying bloodspray. Every single aspect of this comic is overblown and fetishized, so if the violence doesn't bother you, the sex probably shouldn't either.

And for another, for all of his upskirt shots and fetishized chapter breaks, Sonada actually does do a pretty solid job of presenting a cast of women that are well-rounded characters. Heck, as long as you don't discount conversations about guns, this thing passes the Bechdel Test every single time.

The problem, in a word, is May. 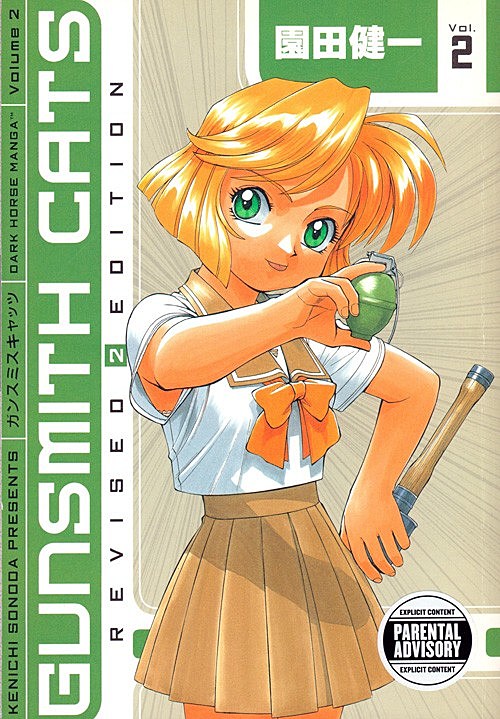 As much as everything in this book might be exploitative on one level or another, but with May, it hits critical mass in a pretty uncomfortable way. It starts with the fact that her two defining characteristics are that a) at the age of 17, she looks like she's 12, and b) she's constantly super-horny. And that's not me making an aesthetic judgment, either: Those are both plot points, brought up by other characters and used in the stories on a pretty frequent basis.

It's a bit of a warning sign, but, you know, whatever. Then you get to the part where you find out that she's an ex-prostitute, which might give you pause, but hey, this is technically a crime story, and that's not unheard of in the genre. In fact, it's nothing you haven't seen already if you've read Batman: Year One.

And then you meet her boyfriend, Ken. Who is 35. 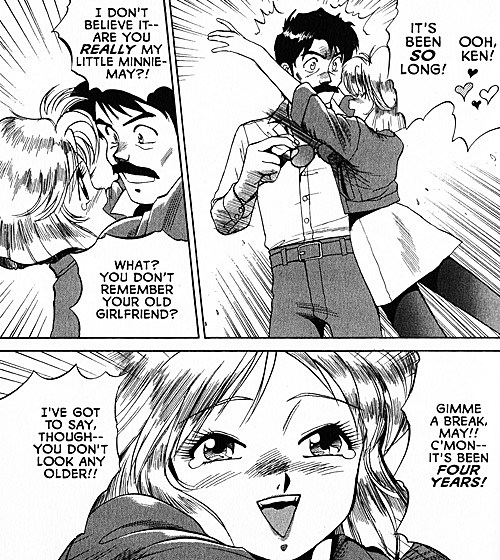 And then they start talking about how their relationship started four years ago, which, for those of you who don't want to do the math, means that he was 31 and she was 13. And yet, no one in this entire comic that's chock full o' cops ever once goes "hey, that's a little f***ed up."

This is not a one-time bit, either. It's a recurring subplot throughout the series that goes to the point of the two of them getting engaged, which is about when I decide that maybe I should never, ever, ever read this comic in public. It's the sort of thing that you find yourself gritting your teeth and reading as fast as possible because you want to get back to the other, non-Nabokovian elements of the series, but it derails the whole thing. And since everything else in the comic is fetishized, from muscle cars to hand grenades to stockings to pistol grips, it's impossible to view it without that lens of over-the-top exploitation that Sonada spends so much time crafting. The more it comes back, the more it derails the whole thing.

On the other hand, it did result in what has to be the single most hilarious Parental Advisory sticker placement in the history of comic books: 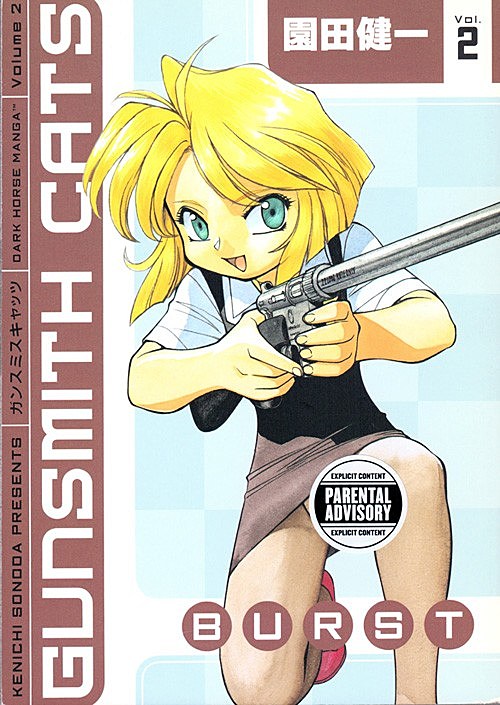 Win some, lose some, I guess.