Q: Thanks to his appearance in LEGO Batman 2, my children are asking me to explain Hush to them. How do I do this? -- @jason1749

A: I'm not a parent, and it's pretty rare that I'm called upon to answer a question about raising a child, but I can definitely understand the problem you're facing here. No father should ever have to explain a terrible Batman story to his child. But sometimes, I guess it just can't be avoided, and when your kids find out about Hush, it's up to you to take responsibility. 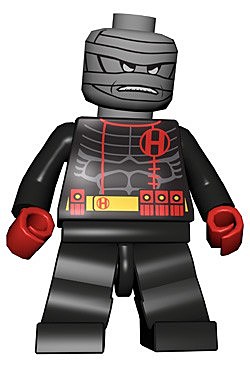 As much as I enjoyed the game, I have to admit that it was pretty irresponsible of Traveller's Tales to include Hush as a playable character. I mean honestly, what kind of message does that send to our kids? That starring in one of the most overrated comic stories ever printed is something to be applauded or, even worse, emulated? It's no wonder these kids today are in such dire straits if that's the kind of message they're getting from so-called "family friendly" entertainment. I'm not usually one to romanticize the past, but it really does make me long for the good old days where Batman games were built around more respectable characters, like psychopathic mass-murdering clowns, horrifically scarred schizophrenics or kleptomaniac dominatrices.

But I guess what's done is done. As much as we'd all like to protect children from knowing that Hush exists, he does, and they were bound to find out sooner or later. It may actually be better that it happens this way. You have the chance to be involved, and the last thing you want is for your kids to be learning about Hush on the street -- or, God forbid, from Jeph Loeb and Jim Lee's original story. That said, it does present quite a few problems, and for most of it, you're going to be on your own. I do, however, have a few tips.

[Editors' Note: We probably don't even have to say this, but please do not follow Chris Sims's advice for raising your children. He does not have great ideas about parenthood.]

First of all, don't lie to your kids. As tempting as it might be to avoid a tricky subject by making things up, the trade-off is potentially losing their trust when they inevitably find out the truth. They're young now, but in a few years, they'll be coming home with questions about all kinds of comics, and you need them to be able to trust you when you tell them things like "there are only 12 issues of Watchmen, no more."

Besides, pretty much anything you make up about that dude is going to sound way better than he actually is. Seriously, if you tried to explain Hush just by looking at him and his goofy outfit of constant facial bandages and Gambit-esque collar-popped trenchcoat? 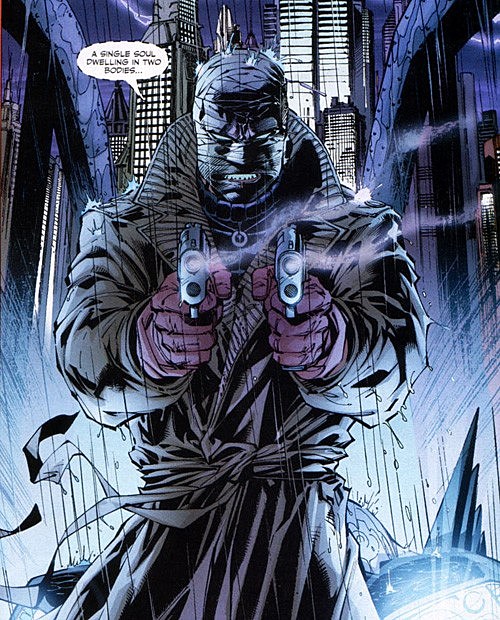 You would most likely end up with "Hush is a hard-boiled private eye who is also a pharaoh, preserved through the art of mummification and animated by an ancient curse," and that actually sounds pretty awesome. There's no way your kids aren't going to want to find out more about that guy, and down that road lies only misery.

At the same time, you don't really want to tell the whole truth, either. Presumably, your kids' curiosity is a sign that they like Batman, a very natural and healthy opinion to have. But at such a young age, affection for Batman is a very delicate balance, and if you actually tell them that Hush is an evil super-surgeon who hated Batman because Batman's dad accidentally didn't let Hush kill his own mom, and so Hush decided to get his revenge through a combination of plastic surgery, neurosurgery, whatever kind of doctoring it is that fixes up a mute hunchback, dressing up as a dead Robin and whispering menacingly for an entire year, all while actually just sidekicking for the Riddler? They'll probably run screaming from the entire franchise, and with good reason. And that's before you get to the story where Hush performs plastic surgery on himself (?!) to look just like Bruce Wayne and then literally steals Catwoman's heart from her chest and keeps it in a jar for a few weeks, which for some reason does not kill her at all because he was able to build "Apokolips-level technology" in his spare time: 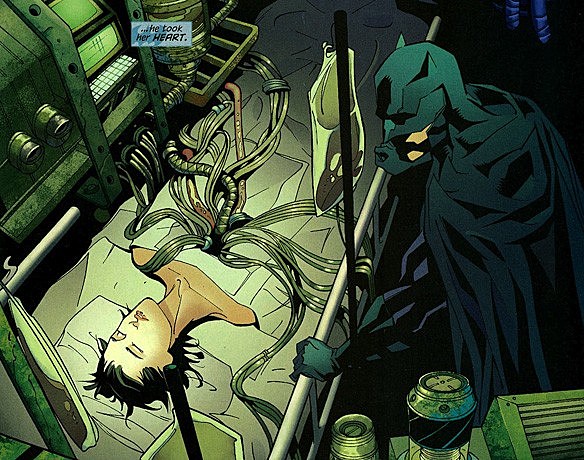 When you're dealing with a stack of hot garbage like that, full disclosure really isn't going to help matters. If that's the case, then you're going to have to figure out how to tell them just enough to satisfy their curiosity, but not so much that they realize the depths of awfulness that we're dealing with here. It's a very delicate balance, and it's going to be tough to pull off.

My advice would be to keep it simple. Leave out the patricidal origin, the stuff with Harold and Two-Face, the Jason Todd fake-out, and pretty much any details of Hush that were done better in other comics -- by which I mean all of them. Go ahead and ditch the "Heart of Hush" part, too; as resoundingly stupid as that story was on the page, a quick summary sounds a little too much like Crank 2 Starring Catwoman, which would be fantastic. Also, if you haven't already, let your kids watch Crank 2. It's a very educational film.

[Editors' Note: Again, Chris's advice on parenting should not be taken by anyone, ever.]

Depending on how inquisitive they are and whether you're at a point in the game where you can just move on to explaining Ra's al-Ghul or Killer Moth, you might be able to get away with something as simple as "He's an evil doctor who worked as one of the Riddler's henchmen for a little while."

If you can pull it off, there are a lot of advantages to going this route. For one thing, it's mostly true! Hush is, in fact, an evil doctor, and not only does that give you an out for explaining those dumb bandages on his head (you're on your own for the trenchcoat), but evil doctors show up in comics by the truckload! There are like twenty-six of them in that game! Lumping Tommy Elliot in with a bunch of interesting characters in the same line of work makes him a lot less distinctive. Plus, that phrasing shifts the focus away from Hush and onto the Riddler, who is awesome.

Really, it's all in your delivery. You may want to practice with a spouse or another adult that you can trust with a sensitive subject like Hush. Be prepared to handle any follow-up questions, and if it comes down to it, you may just have to break down and have a frank discussion with your kids about bad storytelling and what happens when melodramatic pastiches go wrong.

In the end, they'll thank you, even though they may not like learning that Hush exists. Lord knows I didn't.