Q: You've spoken at length about your love of Jimmy Olsen - who is the WORST

Q: and/or sidekick in comics? -- @KDBryan

A: Lucy. F***ing. Lane.There are a lot of comic book characters that I don't like, but with most of them, I don't like them for storytelling reasons. They're either characters that have never really resonated with me, like Hawkeye, who is only just now appearing in a story that I'm actually interested in reading, or that I think are poorly conceived or developed, like Gambit, with his annoying written accent, terrible costume and convoluted backstory. There are even a few cases where I just have some kind of irrational instinctive dislike for them, like Wonder Man and his stupid jacket and stupid face.

With Lucy, though, it's different. She's one of the few characters that I actually hate because I legitimately think she's a bad person. In my head, I know that's absolutely ridiculous and more than a little childish, but that doesn't change anything: I hate her like she's someone I know, and what's more, I feel completely justified in it.

Seriously, just look at this jerk: 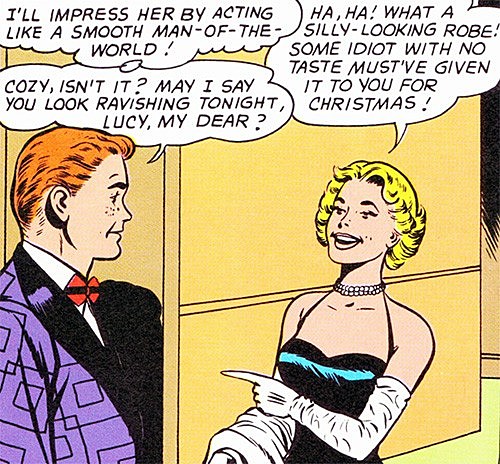 For those of you who aren't familiar with the character -- lucky you -- Lucy Lane was created in 1959 in the pages of Superman's Pal Jimmy Olsen #36 as the result of what seems like a pretty simple idea to give Jimmy a love interest of his own. It makes sense, considering that Jimmy was becoming more popular and well-defined as a solo character as the series went on, and unless you count those deep cover operations where Jimmy wore a dress and seduced a mobster like a leggier Bugs Bunny... 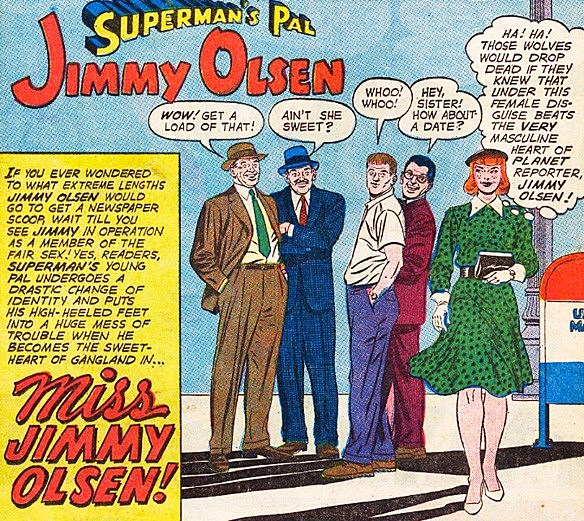 ...romance was in pretty short supply.

In order to fix that problem, the legendary team of Otto Binder and Curt Swan introduced a romantic foil for Jimmy in the form of Lois Lane's younger sister. I'm not sure why they opted to keep her so closely tied to the existing Superman family -- a little too close, once you get to that issue set in a possible future where Jimmy and Clark marry the Lane sisters and Jimmy Jr. starts making out with his cousin -- but her connection to Lois and her job as a stewardess gave her a nice excuse for breezing in and out of the book whenever she was required for the story.

So far, so good. The only problem is that while Binder might've been shooting for "love interest," he ended up veering off and landing a little closer to "soul-sucking demon queen from Hell."

Admittedly, most relationships seen in DC's Silver Age super-hero comics were based on some kind of conflict. That is, after all, what makes a story interesting. The thing is, she doesn't really work.

With a character like Lois Lane, it's easy to see how that conflict plays into the larger story. She might be an annoyance at times, and she's often trying to ferret out his secret identity, but it's all driven by a desire to prove that he doesn't have to worry about protecting her by just owning up to his feelings. Her actions are simplified and magnified by the four-color world in which she lives, but they're all based around a courage and honesty that make her really easy to like. In effect, the entire relationship between Lois and Superman in the Silver Age was her trying to get him to the point where he could admit what they already knew was true: That they loved each other and belonged together. There's a really compelling beauty in that, and as much as we see those stories from Superman's point of view, there's a subtextual level where we really do want to see Lois triumph.

Lucy, on the other hand, is just triflin'. 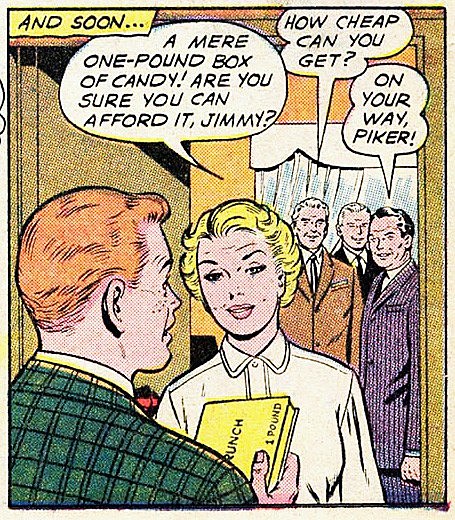 Unlike her older sister, she doesn't have any redeeming qualities, unless you count "being a stewardess in the '60s," which I suppose is up there with "hot librarian in a Van Halen video" in terms of sexy jobs. Really though, she's just mean.

And again, part of that -- part of it, mind you -- is understandable from a character standpoint. Jimmy is, after all, a young, hip kid who just so happens to be best friends with the single most powerful, famous, and generally beloved person on the planet. He's got a cool job that leads him into adventure, he's been to the future, and he occasionally has super-powers. He once dated a girl from the Fifth Dimension and he's been a werewolf on more than one occasion.

What I'm getting at here is that he's a pretty interesting guy. If you or I slapped half of what he's done on an online dating profile, complete with verification from a Great Metropolitan Newspaper, you could pretty much have your pick of the Hottest Singles In Your Area™, if only because they wanted to know if Superman was really that nice in person. But, since Jimmy has all that going for him in the rest of his life, a romance with someone who's not especially impressed by all that makes a nice place to add in his conflict. It's a part of his life where he can't just effortlessly succeed, and it's something that he can't call in Superman to punch.

It's actually a pretty classic set-up, and incidentally, it's also why Perry White's always such a dick to Jimmy even though he's always risking his life by trying to seduce mobsters just to get a story. Unfortunately, Lucy goes way over the top, even for super-hero comics. It's not just that she's not impressed with Jimmy's accomplishments, she's actively horrible about them!

The first panel in this article is the one I always use as an example of Lucy's sheer hate-filled bile every time I need to explain why I hate her so much, but the full page -- from Jimmy Olsen #76 -- is their entire relationship in a nutshell: 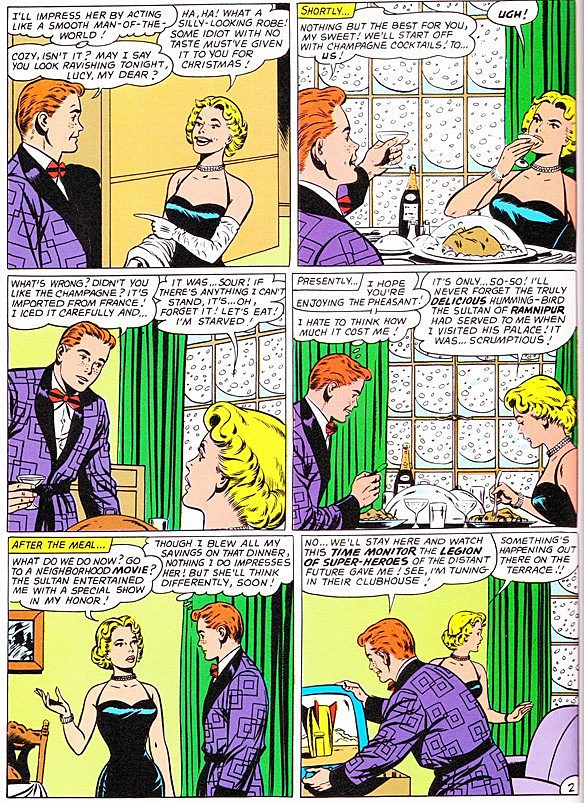 Okay. First of all, that jacket is awesome and she's an idiot for thinking it's not. If anyone knows where I can get one, by all means, drop me a line.

Second, it is legitimately insane that she will not shut up about this Sultan. Like, if you're going to not be impressed by everything Jimmy's done, then you should probably go ahead and not be impressed by anything, ever, let alone some dude who's never even been to space. She's standing there droning on about a "special show" she saw, while Jimmy is trying to show her something he got from the actual Goddamned future. This dude has a TV that will show you the 30th Century! Who cares that you ate a hummingbird!

And the thing is, it never changes. Because of the weird holding pattern of the Silver Age status quo, there's never any payoff to it. We never get a scene where Jimmy finally wins Lucy over, just comics where she's inventing creative new ways to berate and emasculate him in front of other people, including those who look exactly like him: 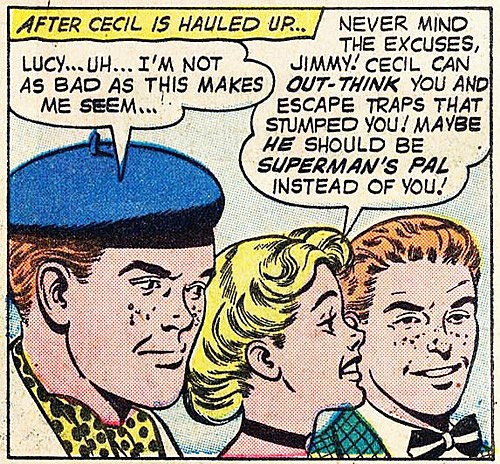 I've read every issue of Jimmy Olsen, and I have yet to figure out why Jimmy keeps trying to date her. I have a theory that because they both have similar blonde hairstyles, Jimmy actually thinks Lucy is secretly Supergirl and that her a-hole tendencies are just a cover, like Clark Kent's meek, mild-mannered demeanor, but that's purely something I made up to make him seem like less of a smitten sad-sack. Their alleged romance just festers like a boil, getting more and more painful as time goes by.

The only time they're ever actually happy together -- and this might be the single weirdest dating situation anyone ever had in the Silver Age, up to and including Aquaman living in a cave with a teenage boy and an octopus -- is when they're both pretending to be other people. For reasons too complicated to explain, Jimmy disguises himself as a mustachioed stage magician called Magi while Lucy disguises herself as an "English starlet" named Sandra, and they fall in love without either one knowing who the other actually is.

The whole thing culminates in Jimmy faking Magi's death because he feels guilty for cheating on Lucy with the girl that is secretly an identity Lucy is using to cheat on him with his alter ego, and both of them miserably agreeing to get married before discovering the deception and assaulting each other with pastries. 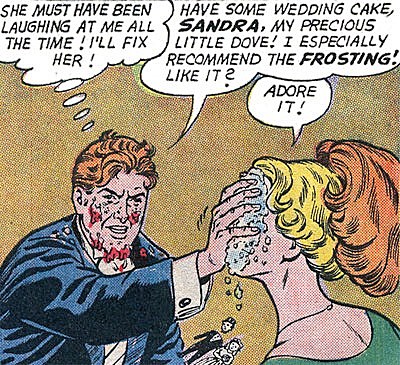 It is a f***ed up relationship, you guys.

Point is, there's nothing in her character that makes the reader want to see Lucy and Jimmy get together. She's just pure mean-spirited hate held together with spite and a pencil skirt, and the only role she ever plays in the stories is an obstacle to Jimmy's happiness. She's not his Lois Lane. She's his Lex Luthor.