Q: What's the one thing about comics you have been wrongest about? -- @adampknave

A: Listen up, Adam: Just because you got your question answered in last week's column, don't go getting all smug, thinking you can just roll up in here casting aspersions on my character. Let's just get this out of the way right now, for the record: I have never been wrong.

I have, however, been slightly mistaken.Usually, it's because I tend to make snap judgment and assumptions about things, which I'm sure surprises everyone who's familiar with my work. The biggest one was when Kick Ass was originally announced and I was initially really excited for it, because I assumed Mark Millar and John Romita Jr. were going to get together for an over-the-top fight comic in the style of Wolverine: Enemy of the State (which is still a high point of Millar's career), rather than pandering to the lowest common denominator of bros with expendable income and racist overtones that they ended up with.

There is, however, one opinion that I have on record that seems pretty dubious now that I look back on it. I actually talked about it on last week's episode of War Rocket Ajax, and it was one of the first in-depth comics reviews I ever wrote.

Unfortunately, it was about how great Rob Liefeld and Jeph Loeb's Captain America #1 was. 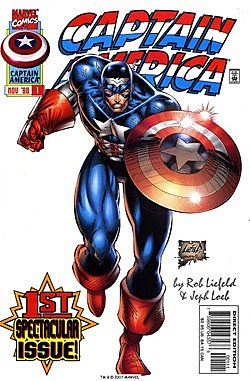 Complicating matters even further is the fact that I wrote this a) for a school assignment where we had to write a five-paragraph essay defending a point of view, and b) as a rebuttal to Kevin Smith, who gave the book a negative review during a guest spot on The Anti-Gravity Room, a comics and video game review show that used to air on the Sci-Fi Channel. If you're curious, you can watch it here with handy Spanish subtitles thanks to the magic of the Internet. In my defense -- if there's any possible defense other than "I was 14 years old" that I need to offer here -- Smith was reviewing an unfinished, unlettered preview copy, and his argument included the phrase "they took a superhero and made him a super-zero." So really, we were both on some pretty shaky ground back then.

And the thing is, I really should've known better. I mean, the reason I was even into Captain America at the time is because I'd followed Mark Waid over from The Flash. Loeb and Liefeld's run came hot on the heels of Waid and Ron Garney's "Man Without A Country" storyline, which is unquestionably one of the underrated classics of the '90s, clearly I liked some good comics at the time. Of course, I guess this was also the era where I considered Gen13 to be the X-Men done right.

That original review has been lost to time, and the only things I really remember about it were that I thought it was super-deep and symbolic that Loeb and Liefeld decided to set Captain America's new origin in Philadelphia -- or as I phrased it back then, "his beloved Philadelphia" -- because, you know, that was the nation's first capital and stuff. I should probably go ahead and say that 14-year-old Chris was pretty dumb about a lot of stuff.

Or was he? I mean, to be honest, I've always just assumed that those Heroes Reborn comics weren't very good, but I haven't actually gone back and re-read them in sixteen years. Maybe I was actually onto something way back in 9th grade! Maybe Captain America #1 is an underrated gem that just gets a bad rap from the never-ending backlash against the Rob! Maybe I was never really mistaken at all!

There's only one way to find out.

Right from the start, things are not looking so good for Teen Chris. I had somehow completely forgotten that this is a comic that opens with Jeph Loeb just straight up writing the Pledge of Allegiance in caption boxes over a flashback: 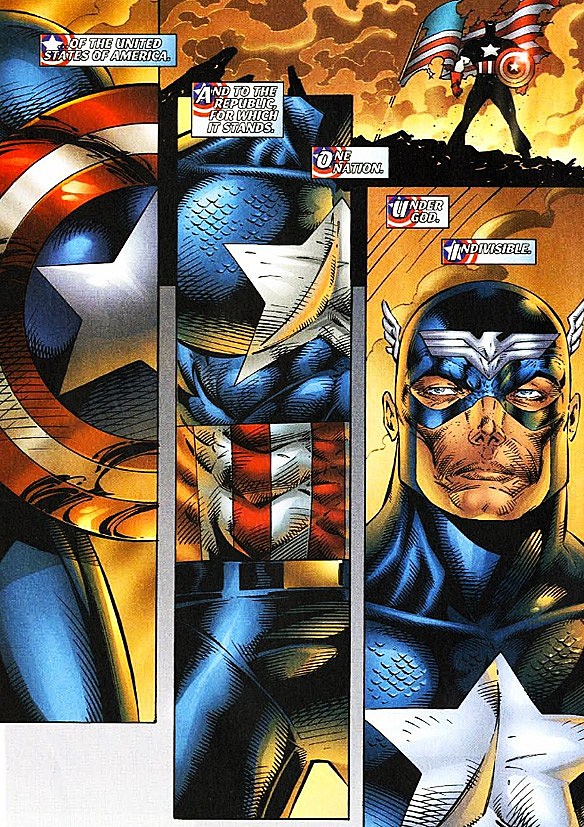 That's pretty rough, and even though this is an artifact from those crazy days when those Batman Halloween stories with Tim Sale had us convinced that Loeb knew what he was doing, that probably should've been a sign that we were eventually going to end up with stuff like Ultimatum.

As for the art... Look. I'm not the rabid Rob-hater that some people are, but I'm not going to lie to you folks either: There is some pretty dodgy art in this, and it does not take long to get there. Captain America looks bored out of his mind standing there for his Joel Schumacher crotch close-up. And who would've thought that costume would look so wrong without the "A" on his forehead? Besides Jack Kirby, I mean.

Once the Pledge has been recited and we've gotten through the morning announcements, the story kicks off with Steve Rogers waking up with his wife and son. Really, that's a pretty solid "everything you know is wrong!" kind of twist, even if anyone who has ever read a story before -- except my 14-year-old self, apparently -- knows exactly how that's going to end up by the end of the issue. Spoiler warning: They're LMDs put there to reinforce Cap's delusion of a normal civilian life, which basically means that Heroes Reborn Cap definitely had sex with a robot at some point.

Also, while some people jeer about feet and pouches, for me, the Rob's signature will always be the way he draws hair: 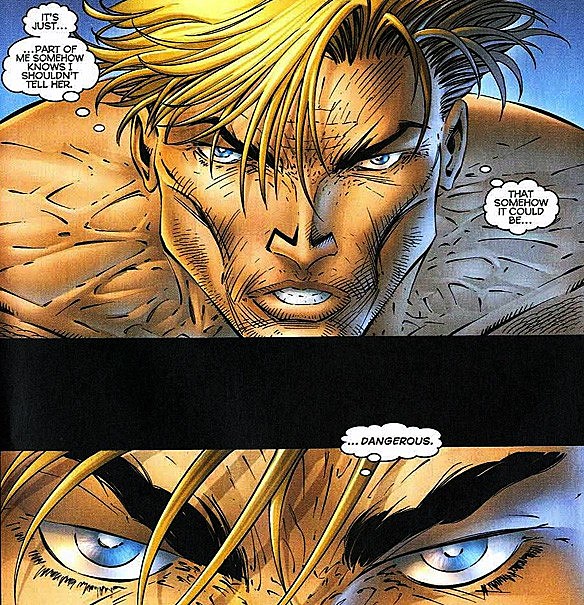 I don't even know what is going on with that stuff. It's like there's constantly a fan blowing from every conceivable angle just off panel to keep it flowing in defiance of both gravity and the laws of man.

Anyway, after a truly horrifying cup of coffee...

...Steve heads off to work, and we run into the first major problem with this issue. For a Rob Liefeld jam, this thing is slow. Usually, that guy has people parachuting into enemy bases and blowing things up by page three, but here, it's just one long interminable sequence of Steve Rogers going to work and telling his friends about these crazy dreams he's been having until he eventually falls asleep for another flashback, this time set to "God Bless America."

But hey, look! It's something good about this comic! 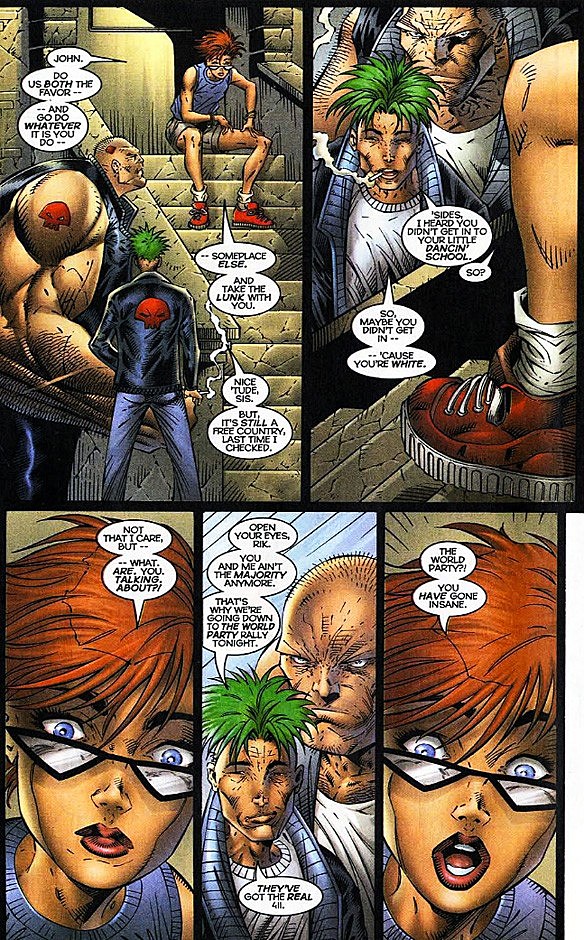 Rikki Barnes, a.k.a. Heroes Reborn Bucky! I mean, yeah, she's not really all that great here (or good at all), but, uh, 14 years later, she'd go on to be pretty awesome as Nomad in a series that had a total readership of about six people. Ask any of 'em, though, they'll tell you it was great. Sean McKeever and David Baldeon had "the real 411" on that one.

A few pages later, things finally start to get truly bizarre with the introduction of Master Man: 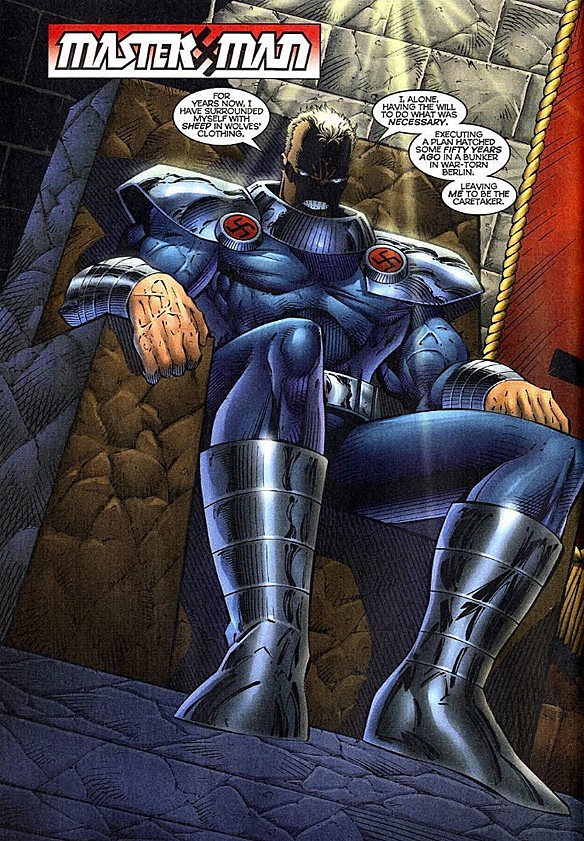 I try very hard to avoid all those cliché jokes about feet when I talk about the Rob's work, but man, that is definitely a hoof at the end of Master Man's right leg.

Master Man (not to be confused with Master Mold, Master Pandemonium or Master P) is secretly leading an organization called the "World Party" that, according to the news report heard on Exposition Radio earlier in the issue, has opponents who "claim" they have ties to white supremacist groups. Just thinking out loud here, but when the dude is up on stage with two swastikas on his chest, you can probably go ahead and refer to those "claims" as "facts."

I honestly do not care that it makes absolutely no sense that at least five full-sized ICBMs are just sitting there at the bottom of a staircase in a church that apparently leads to a cliff (?!), or that they're just standing upright with no apparent means to actually launch. It is too ridiculous not to love. Teen Chris had this part right.

Meanwhile, Cap meets up with an old army buddy from his secret past, Abe Wilson, who has had a hard time finding him despite the fact that Cap appears to stand around eight feet taller than anyone else in the comic:

He hands over Cap's shield, which shifts in size between "frisbee" and "trash can lid" from panel to panel. No sooner is this done then a bunch of Nazis show up for no reason and blow up Abe's house with an explosion so intense that it turns the whole thing into a pile of little orange rocks. Fortunately for Cap, the shield protects him from both explosions and tiny rocks. He breaks free with his clothes strategically torn to show off various kinds of body hair, and cleans all the Nazis' clocks for killing his new friend. 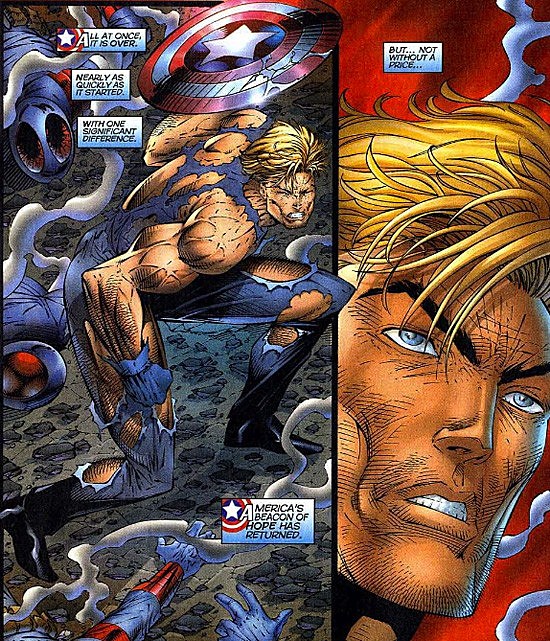 Sadly, Abe dies. It's all very emotional, although just what emotion, I couldn't tell you.

Thus, Cap is back, but before we leave, we take a trip to the Helicarrier to meet Heroes Reborn Nick Fury: Agent of Heroes Reborn S.H.I.E.L.D., and oh dear God in Heaven what is going on with these two?

And that's where the first issue ends.

So... yeah. I was really hoping something in there would help redeem that Freshman English paper, but there ain't no kind of good up in that thing. I'll just have to plead that I was young and didn't know any better, and point out that I probably wrote that paper really fast after a weekend of playing Twisted Metal on PlayStation.

One other thing came out of the experience, though: When I suggested the topic of the paper to my teacher, he rolled his eyes and told me he'd let me get away with it this time, but that I really did need to grow up and stop writing about comic books if I wanted to get anywhere in life.