Q: Is House the craziest movie ever or what? -- @pmihal

A: A few weeks ago, I mentioned that I was gearing up to watch House (also known as Hausu), the 1977 Japanese horror film directed by Nobuhiko Obayashi, which is definitely not to be confused with the 1986 American horror movie of the same name or the TV show about doctor mysteries starring Bertie Wooster. I've had it for a while, but on Halloween night, I finally pulled the trigger and watched it.

Now, I can't in good conscience say that it's the craziest movie ever made. There may be something out there that's a little weirder. The craziest movie I have ever seen in my life, though? Yeah, it takes that title hands down. 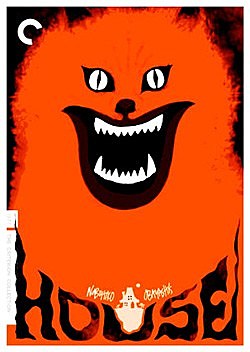 In terms of plot, House is a little difficult to describe. That's largely because -- according to the little booklet that comes with the Criterion editon -- it was partly inspired by conversations that Obayashi had with his 11-year-old daughter Chigumi, who provided the "collection of frights" that he and screenwriter Chiho Katsura built the script around. Once you know that, things start to make a little more sense, or at least, you begin to understand why they don't. The bizarre logic and the strange, persistent "and then..." style of storytelling that make House so interesting all have the distinct pattern of a conversation with a very imaginative child.

The thing that makes House so fun to watch, though, is how good Obayashi is at translating that kind of storytelling onto the screen in a way that's both compelling and genuinely creepy. The weirdness of House isn't just the goofiness of random stuff happening (though there's plenty of that, believe me), it's the threatening strangeness of a world that's not behaving like it should. The rules go out the window because rules are what keep you safe and understanding how something works is the first step to triumphing over it. If those rules are replaced with a child's surreal ideas of scary things, then those attempts at understanding quickly devolve into desperation and futility. That's where House gets its scariness, even if it's often trumped by the sheer oddity of the rest of the film.

Here's the broad strokes of the plot: Seven schoolgirls, all of whom have nicknames that describe their most prominent personality trait, are part of a club that's gearing up to spend two weeks of their summer vacation in some kind of training camp with their allegedly hunky teacher, Mr. Togo. 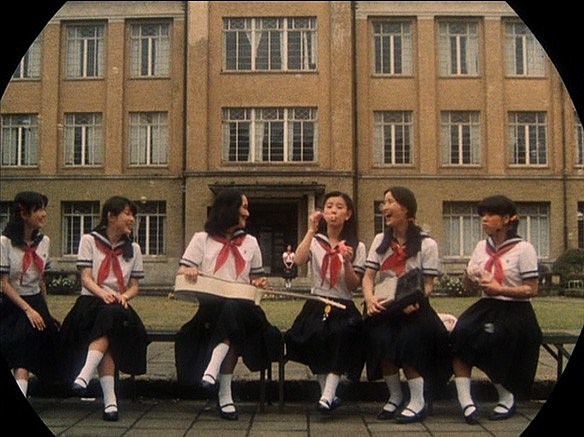 From left to right, there's Sweet, Kung Fu, Melody, Fantasy, Prof, and Mac, which is short for "stomach," because she's eating all the time. Way in the background, you can spot the very fashionable Gorgeous, the seventh member of the group. Originally, she's going to be the only one who doesn't make it to the training camp since she's going on vacation with her dad, but right before the last day of school, he brings home a lady and announces that they're getting married and she will be Gorgeous's new mom.

Considering that this is the first time Gorgeous has even heard of this woman, it seems like that relationship is escalating pretty quickly. Gorgeous feels the same way, having never really gotten over the loss of her mother, and she spends the night looking at creepy photos of her mom's wedding and deciding that she hates her dad. 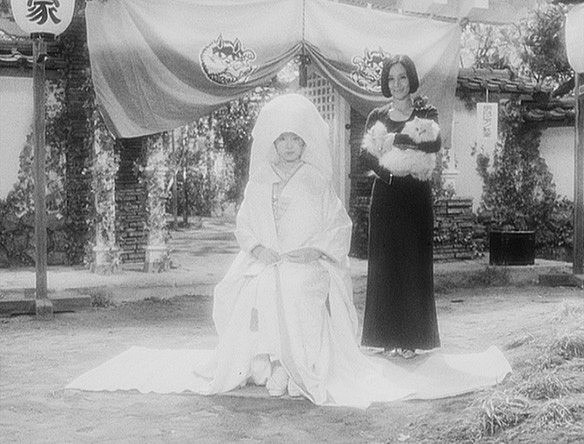 The next day, when Mr. Togo announces that he's going to have to cancel the training camp because his sister is going to have a baby (they were going to stay at her inn, you see), Gorgeous decides to just bail out on the whole vacation and relocate everyone to her aunt's house out in the country. She sends a letter off to her aunt, who she hasn't seen in ten years, and gets a response brought by a strange white cat reading "Come to my house, Gorgeous." Thus after a strange bus journey that uses animation, models, an appearance by pop band Godiego singing a love song, the same white cat causing Mr. Togo to pratfall into an injury that keeps him from caching the bus and a creepy watermelon salesmen, they eventually get to Auntie's house.

And that, as you might imagine, is where the trouble starts. 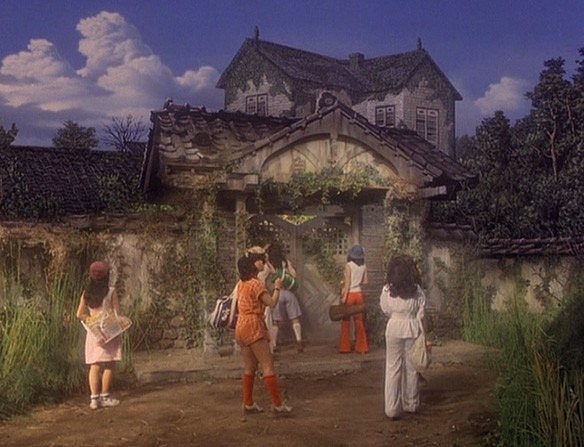 See, unbeknownst to the girls, Gorgeous' frail, elderly aunt is a monster, cursed and twisted by love and war. Before she and her boyfriend could get married, he was drafted into the Japanese army during World War II and died in the Pacific. Gorgeous' aunt swore that she'd wait until he came home, and slowly turned into a hellish nightmare creature that can only survive by murdering young girls. By the time Gorgeous & Co. show up, she's weakened and frail because she's already eaten every young girl in the village, but now her niece has just presented her with a seven-course dinner to feast on at her leisure.

And feast she does, trapping the girls in the house and killing them one by one, starting by decapitating Mac when she goes out to check on a watermelon. What's weird, though -- more weird than the other stuff, I mean -- is that the girls refuse to believe that anything's going wrong until the supernatural stuff hits critical mass. At first, it's understandable; they just assume Mac's gone wandering off in search of food, since the only one to see her severed head was Fantasy, who's defined by her overactive imagination. This is actually where we see the first bits of Auntie reveling in cruelty, too, as she taunts Fantasy by chewing up eyeballs and disappearing into her broken refrigerator when no one else is looking. 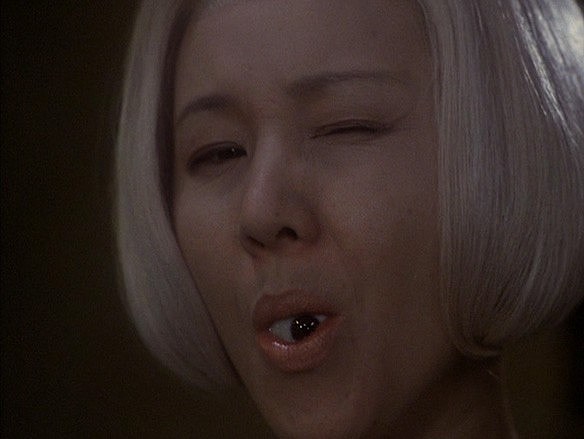 As the movie goes on, these girls shrug off a lot of weird stuff. At one point, Kung Fu is chopping wood in her underwear (?) and gets attacked by flaming logs that jump up and try to bludgeon her of their own volition, and she just brushes it off with a cheery "maybe it was an illusion!"

They even ignore what's going on with Auntie herself, which is a pretty great performance from Yoko Minamida. She starts off in the wheelchair, wearing dark glasses to shield her eyes, but as the story goes on and she devours the girls, we see her walking, then dancing, then climbing through the rafters, smirking at an audience that knows full well that none of these girls are going to get out alive: 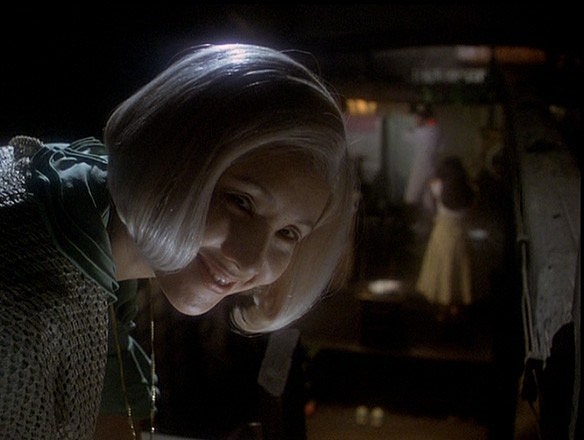 All of this passes without any of them noticing, except for Fantasy.

By the time they actually get wise to what's going on, it's too late. Mac's decapitated and eaten, Sweet is beaten to death by animated bedding and somehow winds up ground into bloody bits in a clock, and in what is probably the movie's most memorable sequence, Melody is eaten by a piano. It starts with her fingers, which get chopped off, prompting her to stare at them in psychopathic glee: 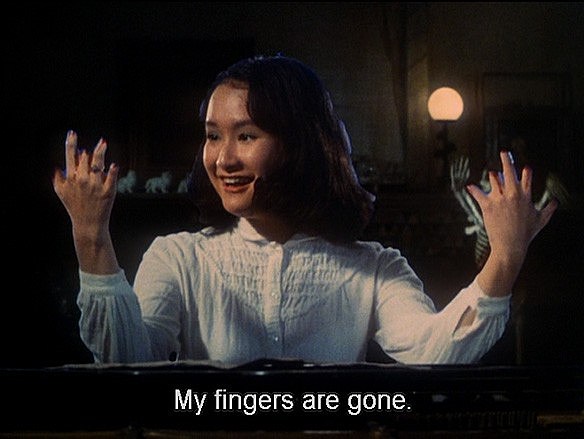 It's worth noting that none of these effects are particularly good, but they're still effective. Obayashi spends the entire first act of the movie emphasizing the fiction of the movie rather than trying to make things seem real. This thing's loaded with matte paintings, models, dreamy frames around his shots and sets that are obviously sound stages -- it's a world where things that seem fake are the reality, so when there are obvious green screens and logs being swung around on wires, it doesn't break the illusion. There is no illusion; the fakery just reinforces what he's already doing.

Gorgeous ends up being taken over fully by Auntie, leaving Prof, Kung Fu and Fantasy to freak out over their chances of surviving 'til the morning when they can run and get help. Prof has found Auntie's diary and desperately reads for a clue on how to defeat her, but as I mentioned above, rules are not part of this equation. They finally figure out that Auntie and her white cat are one in the same, and when a portrait of the cat transforms into the demonic image that Criterion chose for their DVD box (and an awesome t-shirt that unfortunately doesn't come in my size), they decide seemingly arbitrarily that they need to fistfight a painting in order to defeat her.

It doesn't work. The painting just starts shooting blood out of its mouth, filling the house and sending the last girl into the waiting arms of "Gorgeous," whose body has been taken over by auntie. The teacher arrives and is mysteriously (and inexplicably) turned into a bunch of bananas, and then there's one more shockingly tense, creepy scene to close out the movie.

Oh, and did I mention there's an appearance by a pop band called Godiego, performing a cheery, upbeat love ballad as the girls board the bus to their gruesome deaths? 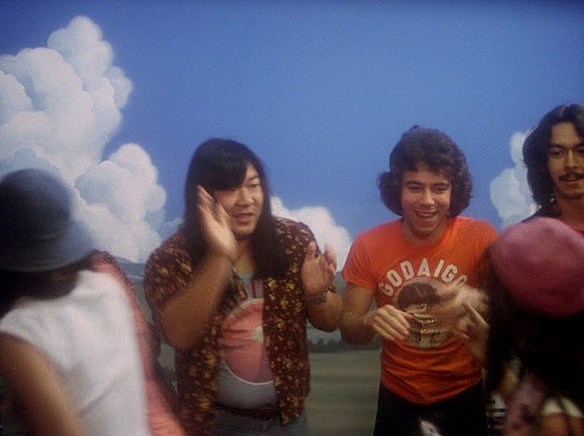 Thematically, it's a pretty tough movie to figure out. I've been writing about it for quite a while now, and I'm not really any closer to pinning down the underlying themes than I was in the opening paragraphs of this column. It certainly feels like something a kid would come up with in a conversation with her dad, from the universal fairytale elements of evil old witches wanting to eat kids, and I think that's probably the reason that Gorgeous leads her friends to their hellish deaths immediately after deciding to disobey her father, but beyond that? It's hard to pin down.

It's the presentation, not the themes, that tend to stick with me, especially coming to it from comics. A lot of what Obayashi's doing here mimics things that you often see on the page. In addition to all the film tricks he does, like overlays and one extremely disturbing sequence where Auntie enters a room and is shot in stop-motion rather than naturally, you'll get shots where he'll isolate a single element of the frame in its own inset "panel." 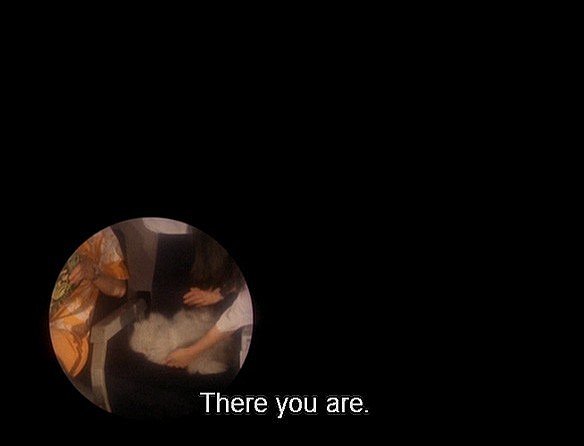 And when Gorgeous is taken over, there's another extremely memorable shot where pieces of her face fall off like the shards of a broken mirror, revealing fire underneath: 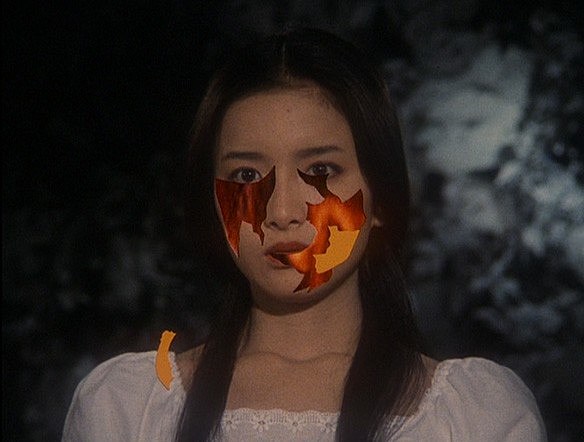 It's got some of the most compelling visuals that I've ever seen in a movie, and it's easy to see how they could translate to the page. I'm pretty sure I've seen distinctive bits and pieces that Obayashi used here crop up in Mail, for instance, and considering that the movie was a hit in Japan when it was released -- and a pretty unforgettable one at that -- I have to imagine its influence is pretty strong.

If you haven't seen it, you can grab the DVD from Netflix or watch it on Hulu Plus, and I'd highly recommend it. If you're worried about spoilers, don't; I could've written an article ten times longer than this one and still not captured what it's like to actually see this thing in motion. It's worth seeking out and watching.

Mostly because of Kung Fu. 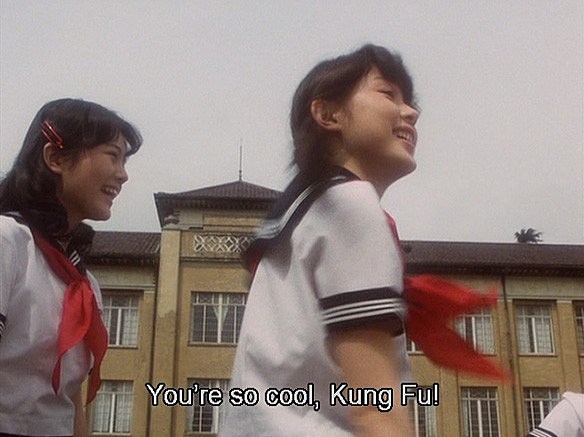 Kung Fu is the best.