Q: As part of the online "media", how in the hell do you stay positive about comics? Every other day is a fiasco. -- @rusty_shackles

A: Hey, thanks! It really means a lot that you notice all the effort I put into keeping an attitude that's --

Wait, did you say that I stay positive? Dude, have you even read my columns before? 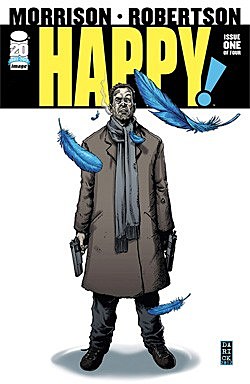 Seriously, Rusty, we worked together long enough that you know full well that I'm the crabbiest dude around here, with the exception of David Brothers, who feeds on hatred and disappointment the way that lesser men sustain themselves on food and water. I'm lucky enough that my focus on commentary and jokes means that I don't have to stay as steeped in the news cycle as others, and I still exist in a pretty perpetual state of grumpiness.

Even beyond all that, when you're constantly surrounded by something, the shine tends to wear off a little. I don't want to complain too much because I can't imagine anything that would make anyone hate me faster than whining about how it sucks to sit around reading comic books and playing video games in a professional capacity, but when you read comics, write about comics and then write your own comics all day, every day, it's pretty easy to get tired of them. I'm always surprised at how relieved I am on those weeks where we don't record War Rocket Ajax, because that means I don't have to scramble to read everything and figure out which ones I want to talk about on the show by Thursday night.

So believe me, I'm as much of a grumpus as anybody else. If, however, I wanted to shift that around to optimism, I wouldn't have to look too hard for a reason.

Here's the thing: This is the best possible time there has ever been to read comics. As much as we might romanticize how great it would've been to walk down to the newsstand and buy those Stan Lee / Jack Kirby Marvel books in the '60s and pine for the Golden Age (you know, the '80s, when Simonson was on Thor and Ostrander and McDonnell were on Suicide Squad), or even yearn to go back to the late '90s when the Justice League was still good, those eras don't hold a candle to what we have today. And most of it has to do with the fact that all that stuff is still around.

We have more access to great comics now than we ever have before, and that's not even getting into what we're seeing with webcomics and digital. All of those comics are still out there, and most of the best are easy to find. Gripe all you want about how the shift in focus to the paperback and the bookstore market has led to overly decompressed storylines and killed the monthly comic as a storytelling unit, but it's also made keeping classic stories in print not just viable, but one of the driving forces of the market. Kick Ass might be an unrepentant piece of s**t, but if its unfortunate success has the side effect of getting me a cheap reprint of Aztek: The Ultimate Man, then at least something good comes out of it.

It's not just super-heroes, either. You want classic adventure stories? You can head over to Amazon right now and buy a ton of relatively cheap, great-looking collections of Hergé, Floyd Gottfredson and Carl Barks without even leaving your house. Prefer comic strips? Fantagraphics has 34 years worth of Peanuts in print right now. Hell, The Complete Funky Winkerbean just got started this year, and while that may only be of interest to students of abject suffering, it's still a testament to how much of comics history is out there right now, available to dive into.

It's the same way with new stuff. There's good stuff coming out from every major publisher, but even if you're so frustrated that you end up chopping out the front half of the Previews catalog and chucking it into the fire, there's enough great stuff coming out from indie and small press publishers that you could just read those and still fill every month. 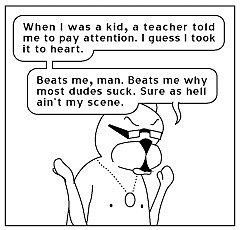 And when you do throw in the Internet and digital comics? Forget it. We've hammered this point ad infinitum here on ComicsAlliance, but it's true: There's an unbelievable amount of comics out there and the barrier for entry is low for a creator and almost nonexistent for the reader, and the sheer variety of what's out there is absolutely staggering. Want to read about wisecracking cats having bizarre, occasionally surreal character-driven adventures? Say hello to the best comic of the 21st century. In the mood for high concept action comedy with medical ninjitsu? It updates in full color three times a week. Do you want to read wordless pornographic romance comics about Victorian robots? That is not just a thing that exists (NSFW), it's also really, really good.

The point of all this is that there's always something new out there to find and fall in love with. Comics are just words and pictures that are put together to tell a story. That's a big medium, and as easy as it might be to get burnt out on superheroes or manga, or to get fed up with a particular creator or publisher, or even to be bummed out by the direction of an entire industry, there's always going to be something out there to remind you why you love them. Sometimes it might not feel like it's worth the effort to go out there and find it when all you want to do is forget about comics for a while and go play video games, but it's always out there, whether it's something new and exciting or a classic comic that you've never read.

It's been like that with me plenty of times. I think it's fair to say that I read more comics than a lot of people, but I've never run out of stuff that surprises me. More importantly, I never will. They could stop making comics now and I'd still be able to find stuff to get excited about for years. There are Batman comics and Jack Kirby stories that I've never read. There are entire genres that I'm only passingly familiar with. I mean, I read comics for 25 years before I read a Gottfredson Mickey Mouse story for the first time, and now they're some of my all-time favorites -- and I have 30 years of that guy's career to get through before it's all over.

Now, that said, constant unbridled positivity is for suckers and PR departments. There might be a ton of good stuff out there, but the fact that it exists (and that it's worthy of focusing on often) doesn't mean that there's not bad stuff. That whole Rah-Rah-Team-Comics-We're-All-In-This-Together attitude is complete nonsense. There's no "us" just because we all like looking at pictures with words on them. There's me and there's you, there's the creators and the consumers, the businesspeople and the artists, the kids saving up their allowance and the guys signing million-dollar movie deals, and there's a ton of overlap between those things. We've all got opinions, and we've all got perspectives that inform them, and that's a good thing, even when those opinions are about why something sucks.

The fact that there are great comics out there doesn't mean that there isn't bad stuff, and the great books don't somehow balance out the existence of the awful ones. There's no equilibrium to be had here; Simonson's Thor doesn't erase the existence of Kevin Smith's Batman and leave us with a perfectly neutral bookshelf. As much good stuff is out there, there can always be more, and we can always do better.

A love for comics doesn't mean that you shouldn't be able to recognize when things are bad, or that you shouldn't point out their flaws. Bad stuff should be called out so that its mistakes can be learned from and not repeated. Unless it's Superman: Earth One Volume 2, a book where Superman passes out guns to revolutionaries and hangs back while they violently kill people to overthrow their evil President, which should be taken out behind the shed and buried like the embarrassment that it is and never spoken of again. 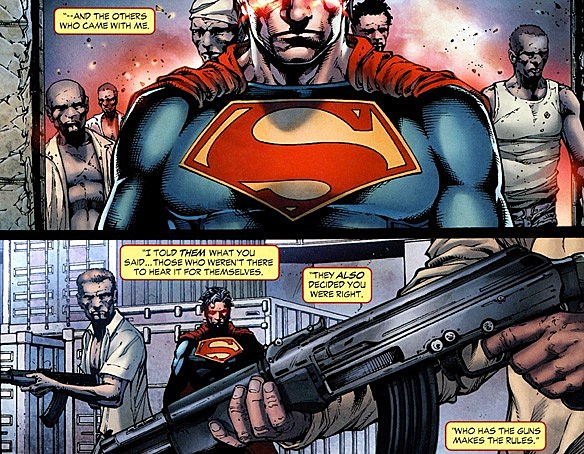 See? Not exactly positive. But I wouldn't have that kind of reaction if it wasn't for those books that make me realize what this medium and its creators are capable of. There's just no reason for them to be bad.

I guess that's kind of optimistic, if a hard-line low tolerance for anything that's not exactly suited to my taste can be considered "optimistic" rather than "a symptom of insanely pretentious narcissism." But it's true: Even when I'm frustrated with comics, even when I hate them it's because I truly believe that every single one of them can be great in its own way. That's about as positive as I can get.

Also? Thanks for putting "media" in quotes, you jerk. Like I don't have enough problems getting respect over here.