Q: What was the best resurrection or return in comics? -- Basically Everyone

A: Probably should've seen that one coming, but to be honest, I was convinced this week's questions were going to be about great second issues, and I'd get to talk about that Kelley Puckett/Daimon Scott issue of Batgirl where Cassandra Cain decides that she should probably learn how to read. Seriously, get that issue. It's great.

Returns and resurrections, though, make a pretty interesting subject all on their own. Just not in the traditional sense.One of the more frustrating things about superhero comics is that unless your name is Ben Parker, death is really more of an inconvenience than a permanent state. If you can think of a character, odds are pretty good that they've come back from the dead at least once, and if the character that you're thinking of is one of the X-Men, we can go ahead and put those odds at a solid 100%. Seriously, I get that everyone had to be mad at Cyclops for killing Professor X for storyline reasons, but this is like the fourth time that has happened. At this point, that's less of a prison-for-life offense and more like a fifty-dollar ticket for Unlawful Foreshadowing Of A Future Event Comic.

To be fair, this isn't something that's unique to comics; shocking resurrections are going to be on the menu pretty much any time you're dealing with long-form sequential storytelling. If Tumblr had existed in 1891, I assure you that people would be losing their minds about how Doyle was cheapening the franchise by retconning The Final Problem and captioning their thoughts with an animated daguerrotype from The Brothers Super-Natural. Comics, though, have made it into something that we're not just used to, but that we expect, and because of that, actual resurrections from the dead don't really interest me that much. Even when they're good (Phoenix) or kind of eye-rollingly unnecessary (Barry Allen), they're just sort of there.

Returns, however, are a whole different thing.

I've mentioned this before, but in comics, getting canceled is literally a fate worse than death. Dying means that there's actually some interest in a character, but when someone just sort of fades away, there's a pretty good chance that you're never going to see them again. Don't get me wrong, with the superhero genre's love of nostalgia, pretty much everyone's going to come back -- we just got a relaunched Green Team ongoing, for cryin' out loud -- but it's a whole lot easier to bring back your Hal Jordans and your Jason Todds than, say, the Dingbats of Danger Street. Who, incidentally, should definitely have an ongoing in the New 52. Call me. We'll make it work.

That's the kind of thing that fascinates me, how these characters just sort of get washed into obscurity and occasionally return to become bigger and better than they ever were before. And nobody -- nobody -- has done that better than Deadshot. 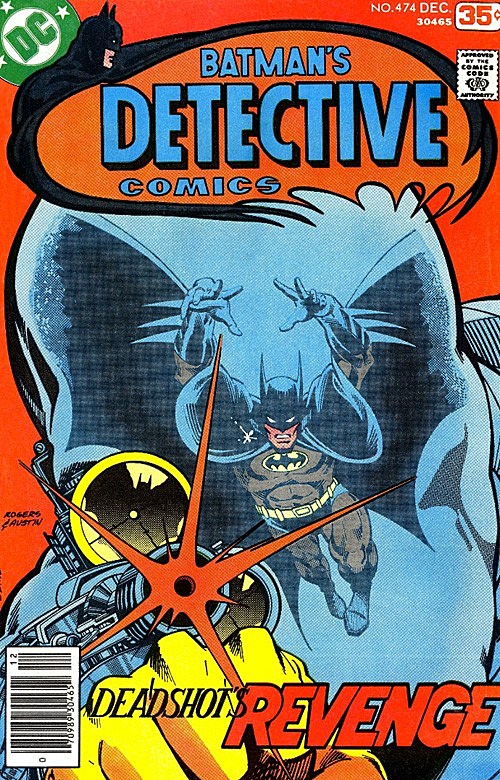 Deadshot's a fixture in the DC Universe now, to the point where he's been featured in two different TV shows in the past few years. That wasn't always the case, though. When he first appears in "The Man Who Replaced Batman," by David Vern, Lew Schwartz and (allegedly) Bob Kane, he didn't even merit being on the cover.

Admittedly, the cover is this... 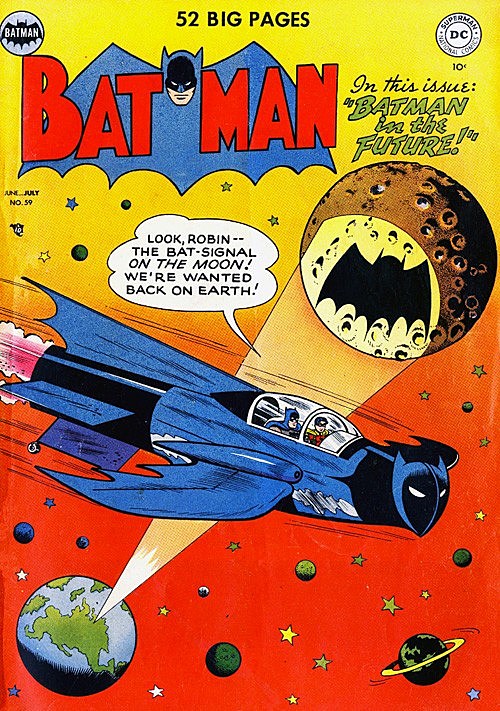 ... and when you're trying to decide how to appeal to ten year-olds, "Batman In Space" is probably an easier sell than "dude in a tuxedo shooting hats," but still. Quick sidenote: It's always a little surprising to me that a guy named "Deadshot," which could not be more stereotypically '90s, was created in 1950. That David Vern was ahead of his time.

Point being, he could no have been more of a throwaway villain. 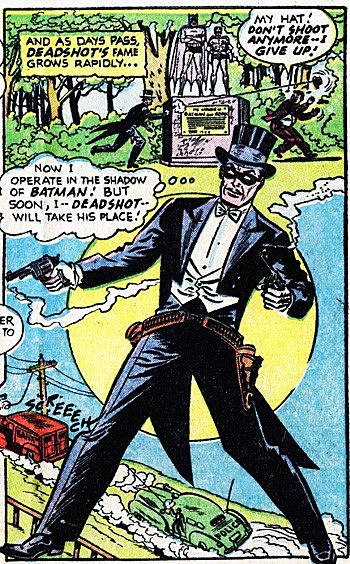 He shows up with a gimmick that's not even really that impressive when compared to a ninja detective in a Dracula costume (he's pretty good at shooting things), trying to run a con and sully Batman's good name, and is defeated when Batman sneaks into his house at night and screws around with his gun sights in order to literally drive him insane. I'm not gonna lie, either: I love that. It's simultaneously the perfect example of a Silver Age style solution that involves making someone think they suck really bad at something, and a great example of Batman being a guy who isn't afraid to straight up cheat that's what it takes to bring down a crook.

Even so, that's pretty much the end of Deadshot. He doesn't show up again until 1977, during Steve Englehart and Marshall Rogers' run on Detective Comics. That run, aside from just generally being great, was really defined by revisiting and modernizing forgotten stories from the Golden Age. They brought back old villains like Hugo Strange and added a new twist on the Joker's origin story from 1940 to get "The Laughing Fish," still one of the all-time greats.

When they brought back Deadshot, though, they struck gold in a completely different way. 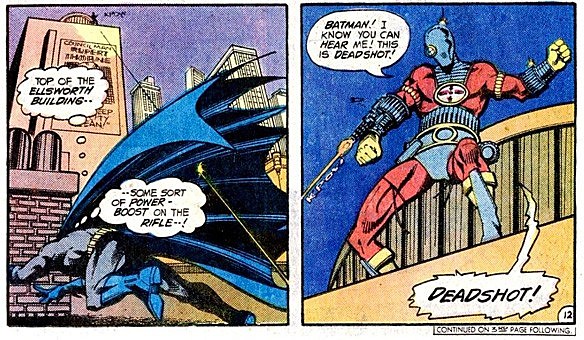 Before we move on, can we take a moment to talk about that costume? It's a complete redesign -- Golden Age Deadshot just wore a tux -- and it is nuts. The blank metal face with the one gun-sight eyepiece, the wrist-magnums with ammo belts wrapped around his arms, and the fact that it's bright red and yellow with an actual gigantic target on the chest. It's kind of the perfect outfit to wear when you're fighting a guy who famously doesn't use guns.

Englehart and Rogers updated Deadshot's gimmick to make him slightly more of a threat to Batman -- I say "slightly" because their entire fight lasts five pages and ends with Batman threatening to trounce Deadshot with a gigantic typewriter, which is awesome -- but more importantly than that, they mess with his motivations. Deadshot no longer wanted to replace Batman, he became obsessed with killing him, whether out of revenge or just as a reaction to that original story's bit about Batman messing with his head to keep him from shooting straight. This, of course, isn't anything unique for Batman's enemies; pretty much everyone you see in that book is obsessed with killing Batman in one way or another. What made it really interesting is what happened next.

Deadshot was still a relatively minor character in Batman's rogues gallery until John Ostrander and Luke McDonnell brought him back in the Greatest Team Book Ever, Suicide Squad. Deadshot was the breakout star of the book -- he even got a starring role in his own mini-series, the covers of which terrified me as a child for reasons I don't understand -- and one of the reasons was how Ostrander developed him over the course of the series. The key factor is that he made Deadshot someone who was obsessed with killing Batman (you know, like all those bad guys), but simultaneously realized that he never actually could. 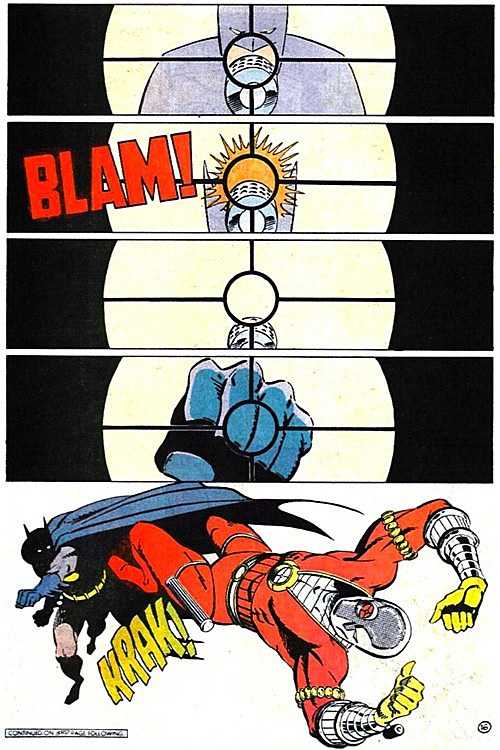 Deadshot is the one character who sort of stepped back, looked at all the experiences he and everyone else had had with Batman, and essentially figured out that he wasn't the protagonist of this story. He still had that hate, that rage, that obsession, but he knew it was futile. As a result, he became this cold, almost nihilistic figure who didn't particularly care whether he lived or died. He was essentially the perfect character for the changing comics of the '80s, and that take on the character -- and the complex motivations behind it that Ostrander, McDonnell and others were able to develop -- pretty much cemented his place in the universe.

But, and this is a key point that a lot of people who like to bring back old villains miss, he still had the abilities and equipment to be a deadly enemy to anyone who wasn't Batman. 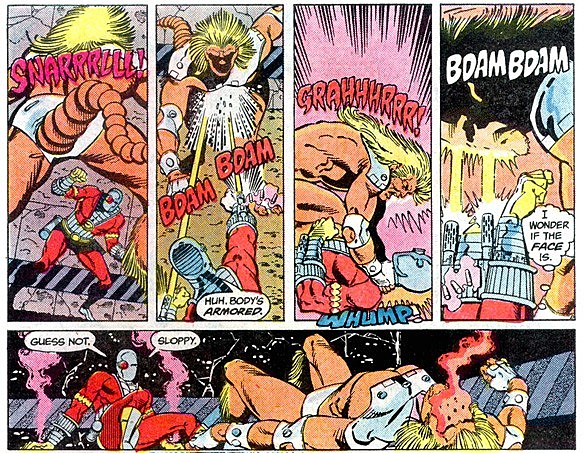 That's the thing I really like about Deadshot: His return wasn't just to attempt to make him more of a threat to Batman -- which is the standard take for villains, and one that can quickly go out of hand and leave us with a Joker who cuts his own face off because he's crrraaaaaaaazzzzy -- but to acknowledge that he never really was, and use that to flesh out his character in other ways. He becomes more complex and layered.

From there, he became a fixture, which is pretty miraculous that he wasn't heard from for 27 years after that first appearance. That's a pretty amazing resurrection, and even though it seems endemic of a genre that's constantly strip-mining its past, it shows that it's not always a bad idea to look back and see what there is to play with.

...so maybe it wasn't such a hot idea after all.

If you've got a question you'd like to see Chris tackle in a future column, just send it to @theisb on Twitter with the hashtag #AskChris, or send an email to chris@comicsalliance.com with [Ask Chris] in the subject line!