Q: So if Batman is your favorite character, and Jimmy Olsen is your third, who's second and why? -- George_Austin

A: My second favorite character? 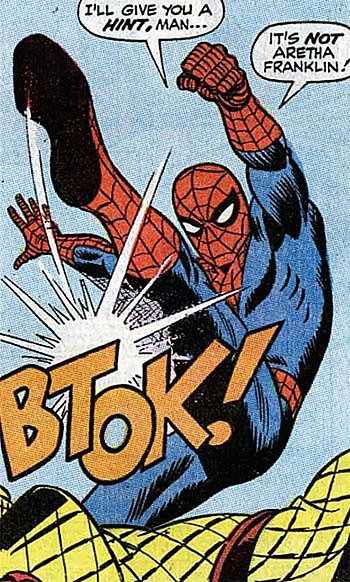 Despite the fact that I don't get the chance to talk about him as much as I do with my other favorites, the number two slot goes to the amazing Spider-Man. Admittedly, being firmly rooted in second place can often seem like a backhanded compliment, the fact is that while my personal preference goes to Batman, I genuinely believe that Spider-Man is the greatest comic book character ever created.

My reasoning probably lines up with stuff that you've heard about the character from pretty much anyone who's ever talked about him: He is unquestionably the best example of the "Hero Who Could Be You!" archetype. When Spider-Man was created, the most prominent young character was arguably Jimmy Olsen, who had a sweet job and a direct line to the most powerful person in the world, and while I think the record will show that I love some Jimmy Olsen, it's impossible to overstate how revolutionary it was for a character to have problems the readers could relate to, and that couldn't always be solved by super-powers. 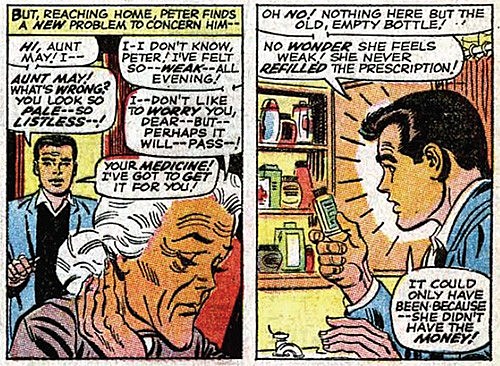 That might seem contradictory to my longstanding opinion that comics need "realism" only slightly less than they needed Dr. Wertham, and I definitely maintain that it doesn't work for every character. With Spider-Man, though, the idea of the Hard Luck Hero is at the center of his character, and it's the basis of a dichotomy that makes him incredibly appealing.

The fact of the matter is, Peter Parker's life sucks. Even at the Joseph Campbell "Land of Perfect Day" beginning of his story, when Uncle Ben's alive and the wheatcakes are plenty, he's still an orphan (albeit one with two loving "parents") who gets picked on at school for being an outcast. The very first panel of the very first Spider-Man story isn't web-swinging or crime-fighting, it's Flash Thompson and Liz Allen being jerks to him: 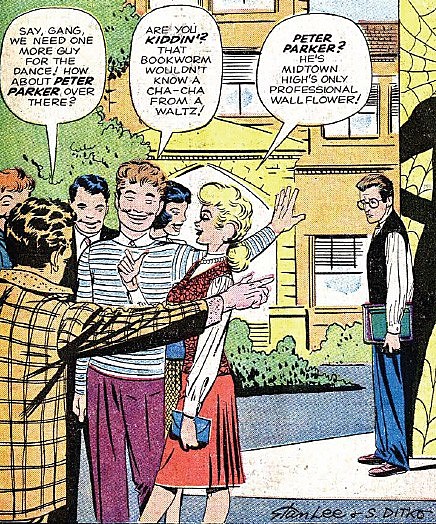 Then, when he actually gets his powers and follows the very realistic course of using them to better his own situation in life, things only get worse, and not only is it essentially his fault, but the one genuinely good thing he had has now been taken away. Simply put, the dude has it rough.

But when he puts on that mask, things change. Peter Parker might have a sick aunt, a boss that yells at him constantly and bills he can't afford to pay, but Spider-Man? He's got problems that you can punch out, web up and throw in jail. Doc Ock and the Lizard might put up a pretty good fight, but compared to a loved one slowly dying because she can't handle the shock of a death he caused, it's a relief.

It's the idea of super-hero comics as escapism literally translated to the page: Peter deals with his crappy life by cutting loose, cracking wise and busting heads as Spider-Man, only to find out when he comes back down to Earth that often, the good he's done as Spider-Man has been countered by things that make his personal life suck even more. In that respect, he's simultaneously the guy that we identify with and the hero we aspire to be.

And that aspirational aspect is literalized right there in his name: He's a teenager when he gets his powers, but he names himself Spider-Man. Spider-Man isn't just who Peter is, it's who Peter wants to be, the man he wants to (and eventually does) grow into: Cool, strong, proactive, always ready with a one-liner, and free of the problems that aren't right in front of him. Superman might pine over "cool, cruel Lois Lane," but his stories end with a wink, because we all know he'd just have to walk over to her, take off his glasses and flash that winning smile. He's entirely aspirational, just like the Batman who's trained to physical perfection and is always two steps ahead of his enemies. Peter, however, represents the reader and the fantasy, and there's an incredible appeal in that.

Plus there's the simplicity of his origin:

Again, it's incredibly easy to relate to, while simultaneously being a sterling example of the kind of thing that makes Spider-Man the moral center of the Marvel Universe. We've all made mistakes and done things with consequences we didn't intend, but very few of us have dedicated our lives to making sure that the same thing doesn't happen again -- not just to us, but to anyone.

I've mentioned before that I don't like the idea of Batman being in any way responsible for his parents' death, but with Spider-Man, the fact that he learns the consequences of being selfish is a key part of what makes him great. It makes him less altrustic, but it also humanizes him; he's not perfect, he's just a guy trying to be better than he was. And in a lot of ways, that makes him an even better role model than a character like Superman, who never falters.

I'm not a big fan of "Spider-Girl," but Tom DeFalco and Ron Frenz nailed Peter's character perfectly in that he retires from being Spider-Man only when he's physically incapable of doing it anymore, and even then, he becomes a police scientist. He's a guy that's never going to let anyone get hurt if he could prevent it. There's nothing that makes a great super-hero like a driving tragedy.

And because those aspects of his character can be boiled down so neatly into themes that are so universal and easy to relate to, he's a character that really works well in a variety of stories. Dark stuff like "Shed" and "Kraven's Last Hunt" are no less valid as Spider-Man stories than the lighthearted stuff Darwyn Cooke did for "Tangled Web," or Paul Tobin's "Marvel Adventures" stuff, which actually strikes a pretty perfect balance. And considering how much humor has been a part of the character since the beginning, he's one of the few super-heroes that works really well in comedies -- Dan Slott and Ty Templeton's "Spider-Man / Human Torch" is hilarious, but works perfectly for the character.

But aside from the big metaphorical issues, Spider-Man's just really cool. For one thing, his powers lend themselves to great visuals, even when he's just standing around talking to himself: 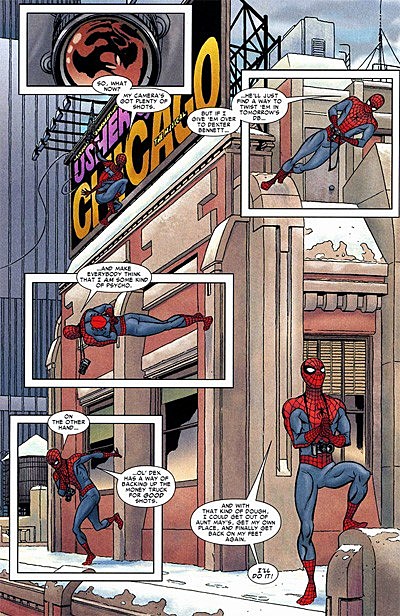 There's a fight scene in "Amazing Spider-Man" #577, by Zeb Wells and Paolo Rivera, where Spider-Man doesn't touch the ground once. He's clinging to walls, sticking to the ceiling, flipping around while he disarms thugs by sticking his feet to their guns with his spider-powers. It's phenomenal, and a beautifully creative use of the character's abilities to tell a story in a unique way.

Also, they put him at a level that, again, is really adaptable. A good writer can create a credible threat for any character -- if you think Superman's too powerful to be challenged, that's your fault, not his -- but Spider-Man exists at a level that lends itself to different kinds of stories. He's really strong (being able to lift 20 times one's body weight is no joke), but in a world with Thor and the Hulk, he's right in the sweet spot of being strong enough to accomplish amazing feats, but not so strong that he can't be believably threatened without Galactus showing up. 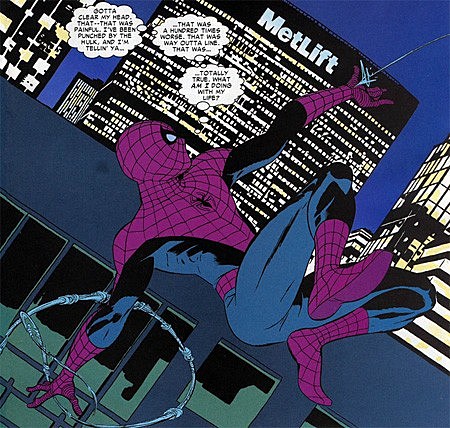 It doesn't hurt that he's got one of the all-time greatest costumes in comics. By all rights, it shouldn't work at all -- when I think "spider," I don't exactly think "bright red and blue with lines all over it" -- but it's a testament to Steve Ditko's design sense that it's as good as it is. It's distinctive, and as odd as it is, it makes sense in the context of the story, right down to the full-face mask to hide the fact that Peter was obviously a very young man. 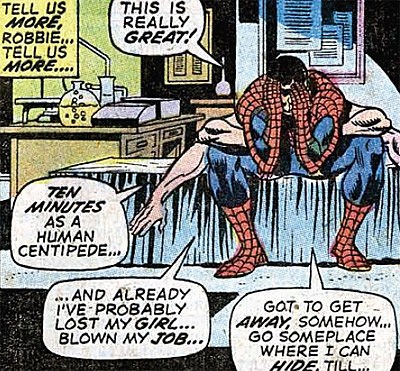 Well. As real as it gets in the Marvel Universe, anyway.

Q: Resolve an argument between me & the boyfriend; is "Dark Knight" better than "Batman Begins?" -- Winskillfull

A: Oh definitely. Don't get me wrong, I like "Batman Begins" a heck of a lot, especially the Scarecrow stuff and Christian Bale's immortal "swear to me!", but let's be real here. "Dark Knight" has an incredibly rich, complex plot built from interconnected set pieces that manage to work both as a big-budget action picture and as an examination of human nature, what these characters want and how far they're willing to go to get it, and for all the hype, Heath Ledger's performance as the Joker really is that good.

"Batman Begins," meanwhile, is about an evil ninja master who wants to microwave all the water in Gotham City because it has fear gas in it.

I'm not saying that's a bad thing, just that it's not really a contest as to which one's better.

Q: What does the World title have on the Intercontinental title? Just the oceans. Seems to me being champion of the continents is all that matters. -- adamrjones24

A: Actually, holding the Intercontinental Championship only means that you are the champion of a minimum of two continents, which could very well leave the other five unspoken for, a fact that necessitated the creation of the European championship. The World Championship, however, represents all seven continents and the ocean, which is why Hulk Hogan could occasionally be seen delivering the Atomic Legdrop to penguins circa 1986.

Q: What character would most enjoy near-freezing chocolate milk? -- tylerralphward 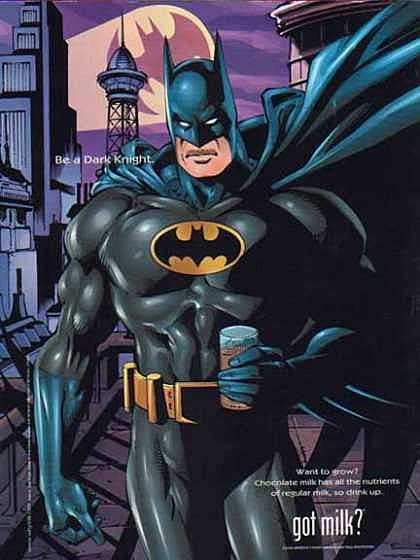 That's all for this week, but if you've got a question for Chris, email it to comicsalliance (at) gmail.com with [Ask Chris] in the subject line, or put it on Twitter with the tag #AskChris!