Q: Are any of the non-Kirby New Gods books from the late 80s and 90s worth checking out? -- vofly 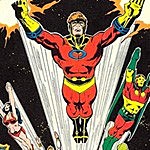 A: The post-Kirby Fourth World stories have been a pretty mixed bag ever since Return of the New Gods brought back Orion and ditched his Astro-Harness and helmet for the most generic super-hero outfit ever, complete with a big O on the chest. Seriously, dude looked like Geo-Force, and that is no way to go through life.

By and large, these characters have tended to work better as elements of other stories than they have on their own. It might just be a function of how hard it is to capture the grandeur of cosmic forces when you're not doing a massive meta-story spread out over four different titles, but stuff like The Great Darkness Saga, Jim Starlin and Mike Mignola's Cosmic Odyssey, and smaller roles in Justice League International, Suicide Squad and JLA have been way better than anything that focuses on the New Gods themselves.

Except for one book: Orion. 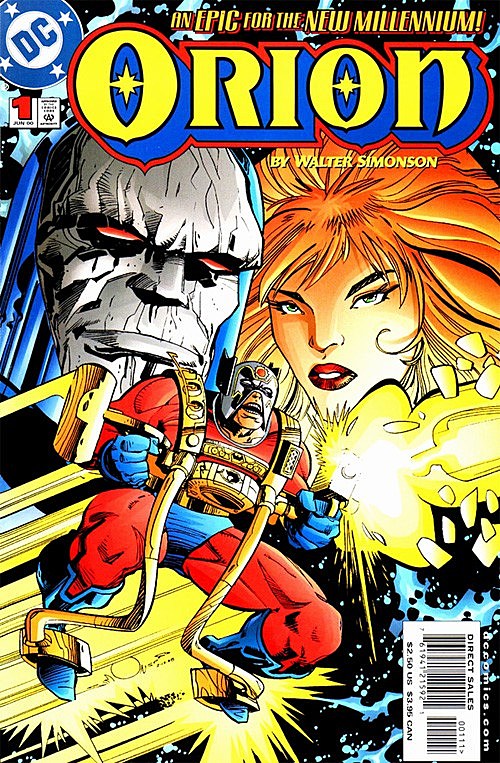 Really, all I need to say about this is "written and drawn by Walter Simonson," and you'd probably be able to figure out that it's the best non-Kirby use of the New Gods just from that, but it's true. Over 25 issues, Simonson did a story that was truly epic in scale, following Orion as he masters the Anti-Life Equation and takes over Apokolips, taking things to the next level . And it does it by doing everything that you'd expect right at the start, freeing up the rest of the run to answer the question of what happens once all the prophecies have been fulfilled.

Which is to say that this is a comic that pretty much opens with Orion and Darkseid fighting to the death, and brother, that is hard to top.

The issue where it all goes down, Orion #5, is one of Simonson's masterpieces. For pure fight comics, it might even top the all-splash page issue where Thor fights the Midgard Serpent and knocks his teeth out from the inside, which is probably the highest praise I can give to anything. 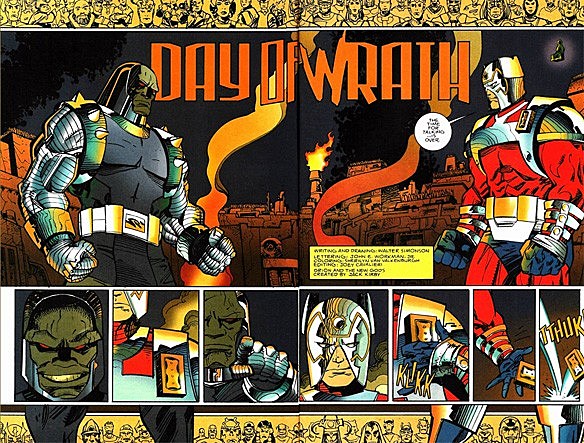 Like his Thor run, Simonson's Orion is lettered by the phenomenal John Workman, and both of the creators are at the top of their game here. It's the textbook on how to construct fights, with each page leading to the next, showing the flow of combat on a cosmically brutal scale, with move and countermove punctuated by their signature sound effects.

When Orion tells Darkseid that the time for talking is over, he's not kidding: Once those two start laying into each other, the only things you "hear" until the last page are KRAKKs,FLTHWHRAMs, and of course... 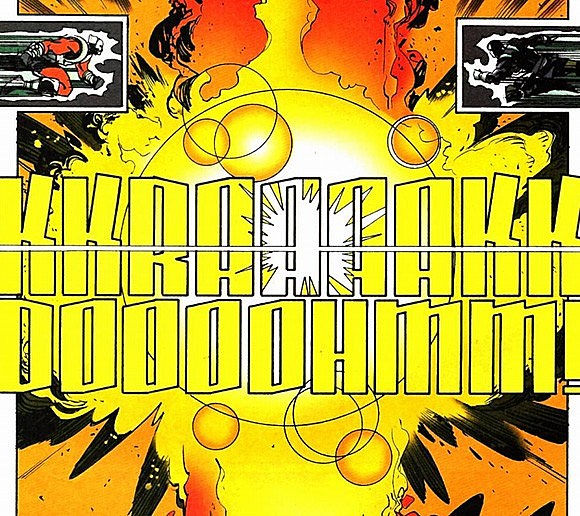 Beyond the obvious, though, there's a lot going on here. The symbolism of Orion throwing away his Motherbox, the device that's been tasked with keeping his boundless rage in check, isn't just a signal to the reader that things are about to jump off (though it certainly is that), but it's the defining moment on which the rest of the series rests.

The beauty of the New Gods, something that creators like Simonson and, lately, Grant Morrison understand, is that they're the metaphorical aspects of super-heroes writ large and purified even further. They're the archetypes of Hero and Villain, Good and Evil, taken to the extreme, with the underlying message being that Good is ultimately more powerful. It's an idea that Orion himself is at the center of right from his origin.

For those of you who don't know, here's the quick version: As part of a peace treaty between the planets of New Genesis and Apokolips, Darkseid and Highfather gave each other their sons. Highfather's son, who would grow up to be Mr. Miracle, remained capital-G Good despite being raised among the constant, all-consuming evil of Apokolips, but Orion, the son of pure, unrelenting cosmic Evil, also ends up Good. Angry, yes, but a champion of all that's Good. In Kirby's mythos, Evil has already lost, it's just a matter of waiting it out.

So when Orion throws away the Motherbox, the symbol of New Genesis, he's not just Hulking up, he's turning his back on Good and trying to beat Evil with Evil. And no matter how good his intentions, in Kirby cosmology -- and Simonson's execution -- that's a losing proposition. It's doomed from the start, and that's the lesson of the series, beautifully constructed as an almost literal throwaway panel in the midst of a thunderous fight scene.

And if that wasn't enough, Simonson added the pure fun of framing every page with the assembled Fourth World characters watching it all happen, reacting to the events (and occasionally running for cover as Darkseid is thrown into the bleachers) as it happens -- including Jimmy Olsen and the Newsboy Legion, covering the Cosmic Title Fight for WGBS:

Interviewing Parademons. That was the single coolest thing Jimmy Olsen did from 2000 to 2009.

Once the pieces are in place, the book not only follows Orion's eventual fall and redemption, but also explores and expands that corner of the DC Universe in a way that hadn't really been done before or since. In addition to bringing in new characters like Mortalla in the main story, each issue featured "Tales of the New Gods" backup stories by some of comics' greatest creators, like Art Adams, Frank Miller, Dave Gibbons, and more. 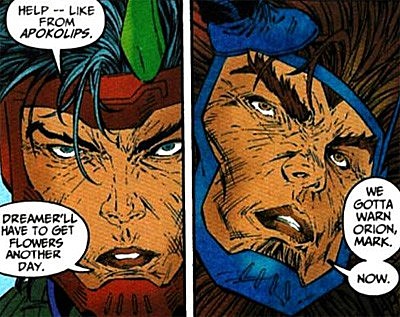 One of my favorite elements explored over the course of the run, though, is Raker Qarrigat, Green Lantern of Apokolips: 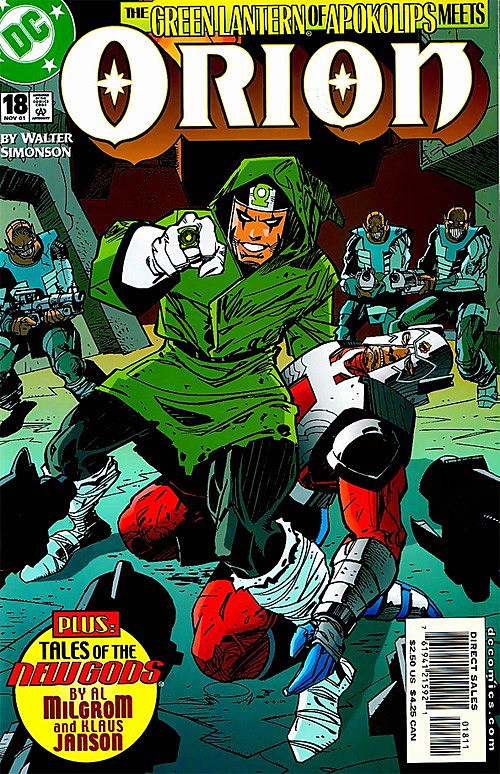 Originally created by Scott Beatty and Joyce Chin for a Green Lantern 80-Page Giant, Raker was the last survivor of a disastrous invasion that pretty much wiped out the entire Green Lantern Corps. Cut off from his power battery, Raker fought in the shadows of Armagetto, keeping his ring in a stasis bubble to prevent it from losing its 24-hour charge.

And in Orion, Simonson, Al Milgrom and Klaus Janson reveal that Darkseid allows him to exist in order to give the people of Apokolips a shred of hope, making it that much more brutal when he crushes it out of them. 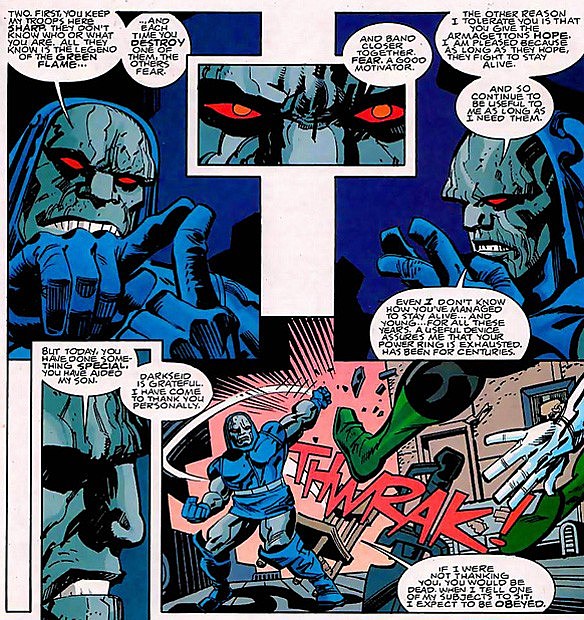 It's a great bit of writing that showcases the depths of Darkseid's evil and his absolute mastery of Apokolips without detracting from the Green Lantern's heroism, and it incorporates elements of the broader DC Universe with the Fourth World, something a lot of creators struggle with.

Like Aztek and Hourman, Simonson's Orion is one of those amazing and incredibly underrated DC books that spun out of JLA, and if you like Kirby, Simonson, or even just good comics, it's well worth tracking down.

Q: Are the giant Joker card, the dinosaur and the giant penny in the Batcave from specific stories? -- kenlowery

A: They are indeed! 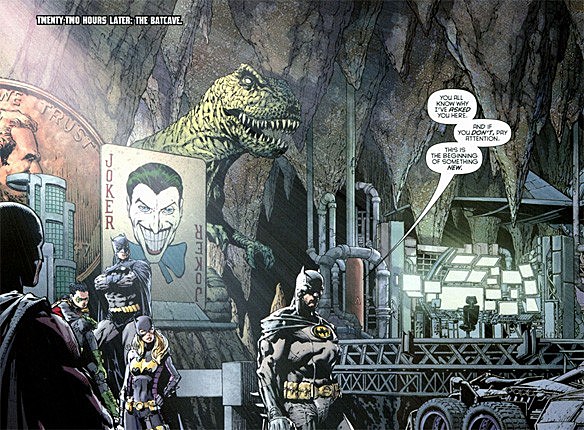 Over the years, Batman has been shown to keep an awful lot of trophies in his anti-crime basement, ranging from freeze rays and trick umbrellas to the occasional dead sidekick's outfit, but the three most visible and most consistent that show up in virtually every depiction of batcave are The T-Rex, the Giant Penny and The Joker Card. And two of them, at least, are actual trophies from Batman's early adventures. 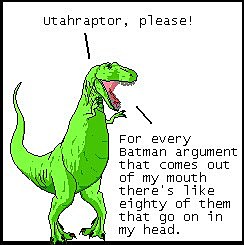 Wait, no. Sorry, got my notes mixed up here. 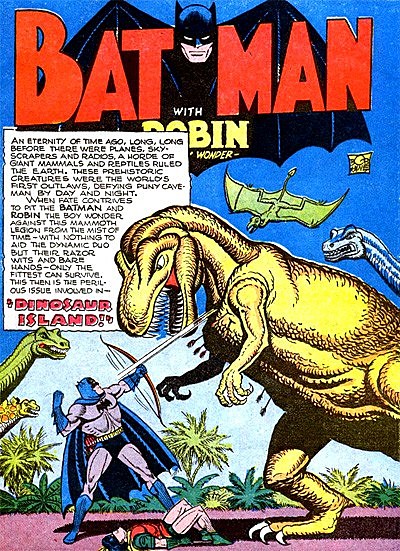 I'd always assumed that the dinosaurs in question were made for some criminal purpose, but as it turns out, they were actually constructed to be part of a new amusement park off the coast of Gotham City, bankrolled by a millionaire who gets his kicks from eating priceless historical treasures: 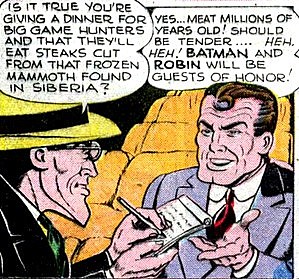 That's right: Batman once ate an unfrozen Mammoth. That is the diet of a crimefighter.

During the dinner, one of the diners issues a challenge...

...and of course, this being Gotham City, one of the other diners is secretly a mobster who sees a gadgetless Batman surrounded by robot dinosaurs as a golden opportunity to get rid of crime's most stalwart foe.

Thus, DC Comics proves once again that The Most Dangerous Game is not so good a story that it can't be improved by robots, dinosaurs, and Batman.

Incidentally, one of my all-time favorite things about Batman is the fact that he narrowly avoids being killed, then sizes up the attempted murder weapon and goes "You know, if you're just going to throw that out..." 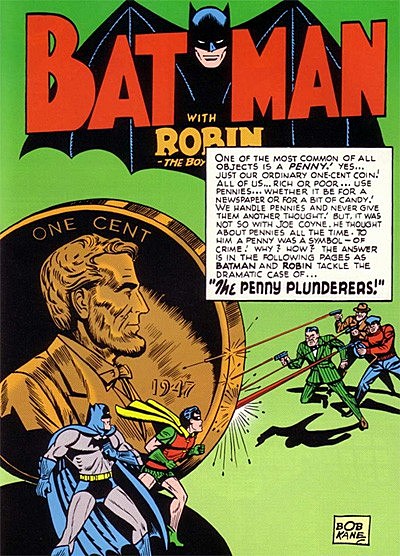 And even by the standards set by "Dinosaur Island," this one sits at the height of Golden Age madness.

It revolves around a small-time crook named -- wait for it -- Joe Coyne, who, after seeing his best-laid criminal plans thwarted due to a few penny-related coincidences, goes completely insane and decides to get himself a gimmick:

Thus, Coyne sets about committing some penny-related crimes which, surprisingly, have absolutely nothing to do with the Giant Penny. It's just set dressing at the scene of of one of his other crimes, when he attempts to steal a rare one-penny stamp (stamps being the target of at least 40% of all crimes committed in comic books between 1939 and 1969). 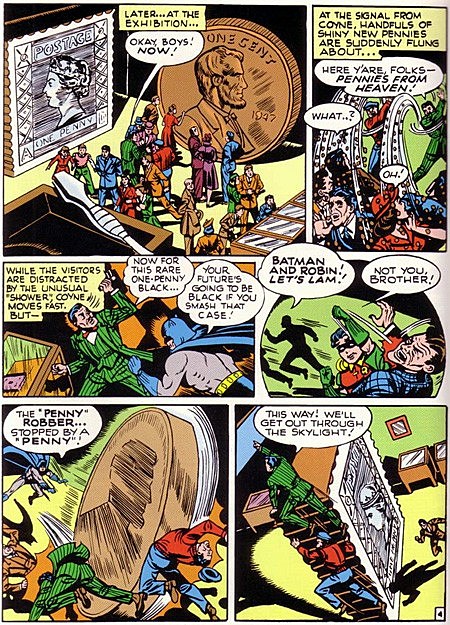 I find it interesting that of all the Batman stories of the Golden age, these are the ones with trophies that have become so prominent that the Batcave just doesn't look right without them. Other than the Penny being typically evocative of Dick Sprang's art, they don't really have any significance, as neither one really represents a turning point for Batman and the villains they're related to are both forgettable one-shot foes. They just look cool. You see them and immediately know there's a story behind them -- and you probably think it's one that's way better than they actually are.

The odd one out, then, is the Joker card, which is immediately recognizable as being tied into not just a big Batman villain, but the big Batman villain. And yet, it's the one that doesn't come from a particular story. 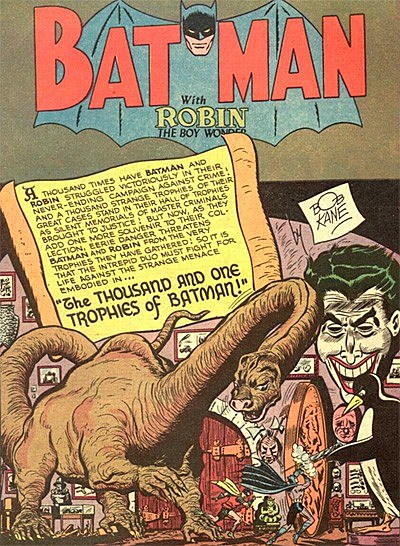 Instead, it's a giant replica of the Joker's head, which is pretty appropriate. If there's one thing we know about that guy, it's that he totally loves to make replicas of his own head. It's almost his entire deal.

Anyway, it first shows up as a trophy, and I suspect that over time and different artists, it turned into the far more appropriate visual of a giant card, which again just looks like something that has a neat story behind it. The Joker has used playing cards as his signature in several stories -- Year One, Kililng Joke, The Dark Knight, "The Joker's Five Way Revenge" and so on -- but those are always regular sized cards, and having them tacked up on Batman's corkboard isn't quite as striking as the giant version.

There may have been a story that came later to retcon it as having its origin in a specific event, but if there is, it sadly represents a gap in my Batmanology expertise. But really, I never claimed to be all that great at Batmanterior Design.