Q: What comic book couple do you find the most annoying? -- @tangognat

A: My go-to answer for this one is "Curt Franklin and Chris Haley," but I don't think that's quite what you're going for.

I've got to say, I like a little romance in my comics. That might sound a little strange considering that my favorite character only sporadically has love interests, and they tend to end up being murdered, going insane or being written by Kevin Smith, but it's true. Unfortunately, for every "I love you, Lois Lane. Until the end of time", there's an "Ah cain't touch yuh, Remy!" mucking things up, so really, the challenge here isn't figuring out which romance is annoying, but narrowing them down to the absolute worst.When I think about annoying comic book romances, there's one that pops into mind immediately, and you could make a pretty good case for this one taking the dubious honors. I speak, of course, of Rogue and Gambit. 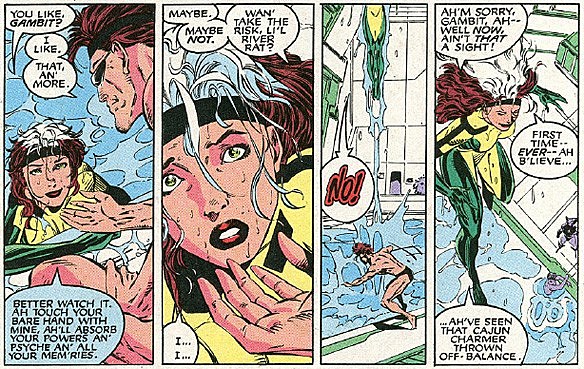 Ugh. No thank you.

Admittedly, my distaste for fandom's favorite incomprehensible mutant lovers may have a lot (read: almost everything) to do with working in a comic shop and dealing with a constant stream of sketchy fanfic writers who wanted to tell me all about their vision for a perfect world where "Remy" bought one of the Genoshan slave collars on the black market so that they could finally consummate their star-crossed love, but I think there's a little more to it than that.

I think part of the problem is that the entire thing is based on a sexual tension that can never actually be resolved, because there's absolutely nowhere to go from there. The whole point -- as they will remind the reader at length every single time they're in more than two panels together -- is that they want to touch each other and can't. Thus, that tease becomes the default setting of the relationship, and even when there are clear ways around it -- like, say, giving Leech a set of headphones and a Gameboy and having him stand outside the room for a couple hours -- it wasn't moved past, because there's nowhere to go. Even when Rogue eventually gains control of her powers, something else has to be manufactured to keep them apart, like Gambit's extremely tiresome secret dark mysterious past. It's rooted in an interesting way to underscore the traditional Marvel Comics downside of being fantastically pretty and having amazing super-powers, but it's also the sort of thing that, once established, gets real old real quick.

Especially when it's brought up all the time for like twenty years, by characters that are a massive pain to read. It's bad enough that they're front-loaded with enough melodrama to power Days of Our Lives for the next forty years, but actually dragging yourself through the quicksand of extended scenes with both cartoonish Southern accents andcartoonish Cajun accents is a test of endurance for even the die-hard Claremont fan. Seriously, I grew up in South Carolina and took four years of French in high school, and I only know what these two jabronis are saying thirty, maybe forty percent of the time.

Also, finding the Gambit/Rogue romance to be anything but an absolute trial would require me to actually care about Gambit and/or Rogue, and while I understand academically that there are people who do that very thing, there's no power in this world or the next that's going to make it happen for me. 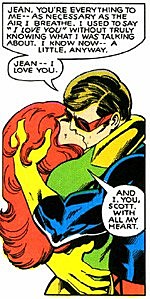 As much as I don't like those particular characters, though, it's not just them. As big a part as it is of those books and as much of a touchstone as it is for those characters, the various romances of the X-Men have never been something that really appealed to me -- and I say that as a guy who really, really likes the X-Men.

Cyclops and Phoenix, for example, do absolutely nothing for me as a reader. Again, it's something I get intellectually, and I can see that Jean's death in "The Dark Phoenix Saga" is a big emotional moment for those characters, but it feels like it peaked then and shortly devolved into stories where Cyclops married her clone, then totally ditched his new wife and came back for decades of mischaracterization, and as a result, it never really engaged me in the way that other romances did. Even the love triangle with Wolverine never really felt like it did more than just open the door for another source of intra-team angst.

Call me a heretic if you want, fans, but for me, "Scott/Jean/Logan" is way less compelling than Archie/Betty/Veronica.

And then there's the other major X-Men franchise relationship, Colossus and Kitty Pryde. Again, I guess it's fine if that's your thing, but for me it's just sort of something that's there, but with the added bonus that it always seemed massively creepy for a dude who looks like he's 25 to be straight up dating a girl who was identified quite often as being 13, which only gets weirder when she starts trying to get him to finally go ahead and shtup her before they turn into space monsters.

On the bright side, though, it did lead to one of my favorite comics, when Colossus breaks Kitty's heart because he fell in love with an alien, so Wolverine and Nightcrawler take him out to a bar to get him drunk and beat the living hell out of him. Now that's comics.

Really though, those relationships are mere prelude to the pairing that takes its rightful place as the absolute worst romance in the history of comic books. Worse than Gambit and Rogue. Worse than Tarot, Witch of the Black Rose and the Skeleton Man. Worse even than Jimmy Olsen and that horrible shrew Lucy Lane. Ladies and gentlemen, I give you... 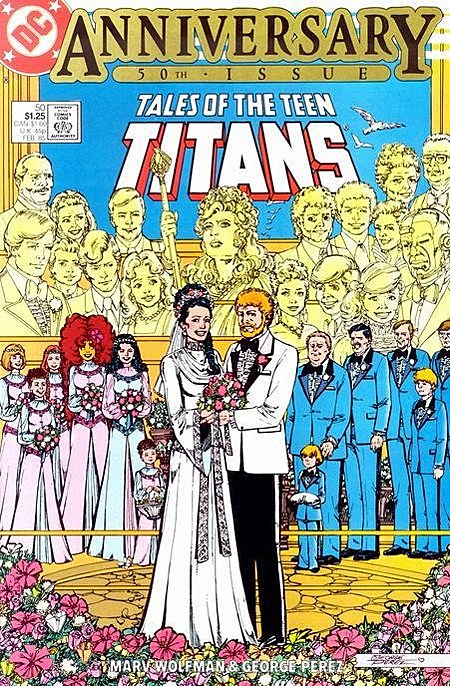 For starters, we have Donna Troy, and I don't even want to get into the mess there. All you really need to know is that she's Wonder Woman's hot younger sister. And so of course, as you might expect from a description like that, she ends up dating and even marrying divorcee, complete failure and utter shameless creep Terry Long. 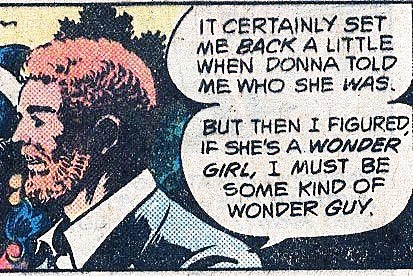 Man. This guy. It's pretty clear if you go back and read the issues that Terry was meant to be a viewpoint character for readers, a normal guy who was taken into the world of super-heroics by his affable charm, except that they completely forgot to actually give him any charm, and instead just shot him straight into loathsome.

When he first appears in New Teen Titans #8 -- and I want you to keep in mind that the word "Teen" is in the title of this comic -- Terry is a college professor who has already failed to get tenure and is working part time at a bookstore while claiming to be working on his doctoral thesis in Greek mythology. And if that wasn't enough to make him a catch, his first act on a lunch date with Donna is to talk about how hot her friend is in what can only be read as the world's least subtle attempt to engineer a threesome, while simultaneously quoting Saturday Night Live. 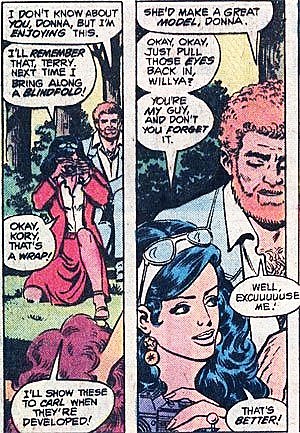 Even stranger, this somehow manages to endear him not just to Donna, but to Starfire as well:

At this point, Terry Long is just completely inexplicable. I mean, obviously they were setting him up as some kind of smooth-talking Casanova, but there's absolutely nothing there to back it up, unless Marv Wolfman and George Perez were laboring under the impression that sexy coeds were just waiting for older dudes with puffy beards, shirts carefully unbuttoned to reveal graying chest hair and pop culture references that were stale even at the time to come sweep them off their feet.

Then again, I guess comics are largely based in escapist fantasy. I just wish they weren't fantasies for total creeps. 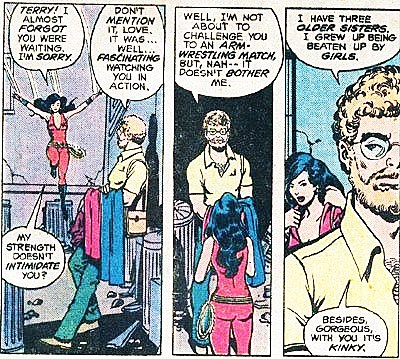 I've said it before, but man. I want to never stop punching that guy.

Q: As a lapsed Batman reader, what would you recommend as a starting point for catching up on Morrison's run? -- @scootermac23

A: It's pretty easy to catch up, you just need to start at the beginning of his run with Batman and Son, and then move on through The Black Glove, Batman R.I.P., Final Crisis, the two Batman & Robin hardcovers, and then Return of Bruce Wayne when it gets collected, and then on to Batman, Inc. The Resurrection of Ra's al-Ghul is extremely skippable, but it is worth your time to go back and read Morrison and Klaus Janson's "Gothic," from Legends of the Dark Knight (which is in trade and was just recently made available digitally through comiXology) and Morrison's JLA if you haven't already.
Q: I'm planning a 80s movie marathon for my birthday and would love your recommendations. -- @deatoni

A: The Last Dragon, Big Trouble In Little China, Road House, Gymkata and The Warriors. You will thank me.
Q: What's the best Fantastic Four lineup ever? (I'm partial to post-Secret Wars Shulkie, myself). -- @gorjusjxn

A: Aside from the classic lineup, I've got to give it to these guys: 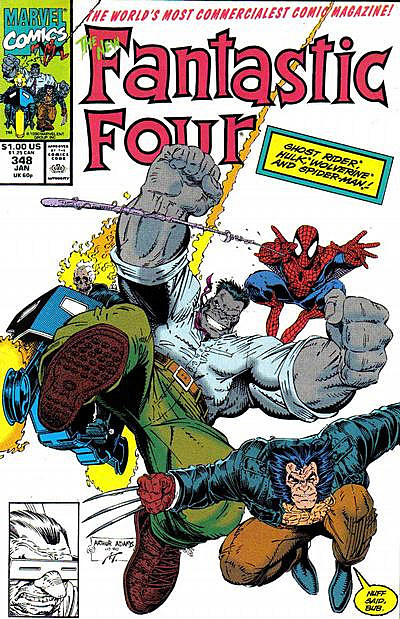 Q: As a Punisherologist, what in your opinion is the most underrated non-Ennis/Aaron Punisher story arc? -- @djeljosevic

A: Honestly, the entire Mike Baron run -- the first sixty or so issues of the first ongoing series -- is really fun. It's essentially Baron doing a series of big goofy mid-80s action movies starring the Punisher, including direct riffs on stuff like Class of 1984. My favorite bit, though, is the one where Frank has to go undercover as a meth-dealing biker in order to kill Charlie Samson, the Marvel Universe's equivalent of Charles Manson. Seriously.

Also, I'd be remiss if I didn't mention Punisher War Journal #19, which has the best cover blurb of all time. 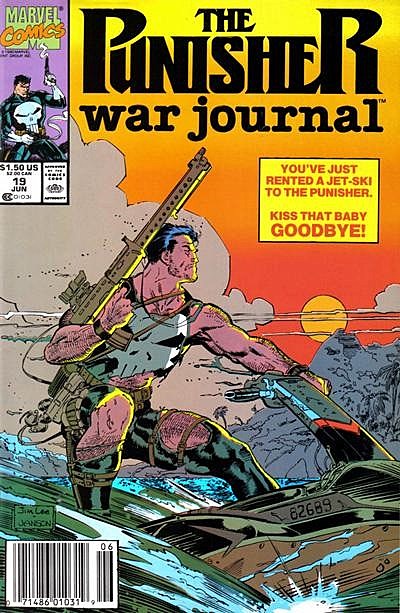 Suck it, Jet Ski rental clerk. Suck it hard.
That's all we have for this week, but if you've got a question you'd like to see Chris tackle in a future column, just put it on Twitter with the hashtag #AskChris, or send an email to comicsalliance@gmail.com with [Ask Chris] in the subject line!