(Click for the Ask Chris Theme Song by the Ampersands!)

Q: You are going to play a game of Dungeons & Dragons with 5 comic characters who for the sake of the question are interested in playing, have enough knowledge to play and will be completely free for your weekly session. Who would you play with and who would be the Dungeon Master? -- Luke, via email

A: As ComicsAlliance readers familiar with my cardboard dragonslaying and journeys into elf help will no doubt recall -- and as others will be completely unsurprised to learn -- I am a dude who loves some D&D. In fact, I'm willing to say that I love it almost as much as the Chris Sims who actually works as a game designer, whose email I occasionally get. You can tell us apart because he has a beard, and only thinks about Batman sometimes.

Which brings me to my first point: Much as it might surprise you, there is no way in hell I would play D&D with Batman.As much as I've spent the past two decades wishing Batman was my best friend (what? Like you haven't?), gaming night is where we'd part ways. Seriously -- and I don't believe I have ever said this before -- that dude would be the worst. He is clearly the type of guy who would memorize every entry in the Monster Manual so that he could exploit their weaknesses (and invent plausible reasons for his character to also have that knowledge), not to mention a tendency to order the other players around like they were his sidekicks.

And as your Dungeon Master? Forget it. 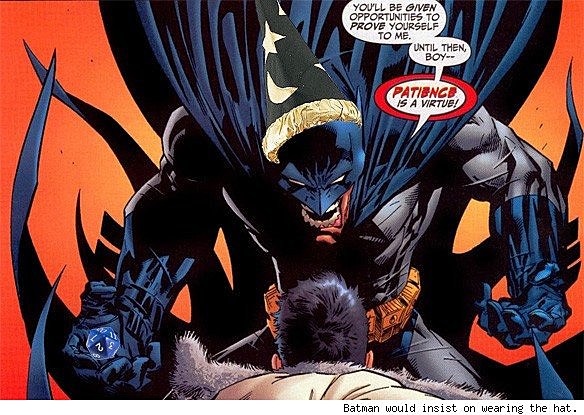 Yes, playing in an actual cave would be pretty sweet and Alfred's gourmet cooking would certainly beat the pants off of the normal Game Night ration of pizza, Cheetos and Mountain Dew, but he's definitely the sort of DM who would see the infamous Tomb of Horrors as a little too easy on the players.

I imagine there would be a lot of "dungeon maps" that looked an awful lot like possible escape routes from Arkham Asylum, and several quiet, measured responses from behind the DM screen about how if he didn't kill your character for failing the very first saving throw of the session, then the rules would be meaningless.

Also, he would probably only roll twenties, having spent years practicing polyhedral spin control in case he ever needed it to beat Killer Moth or whatever. No, thank you.

Now with that settled, there are plenty of super-heroes who would make solid additions to a game. I tend to like playing Monks in my games -- "Monk" being the D&D term for "guy who runs on walls and does magic kung fu all over the place" -- so with five characters to choose from, that gives me enough to pick out a DM and the four basic food groups of the Adventuring Party: Fighter, Rogue, Cleric and Wizard.

First up is every party's requisite meat shield, the Fighter, a specialist in front-line combat who gains a bunch of different options on how to attack, all of which lead to a desired result of putting a pointy piece of metal into something you don't like. For that, you need a guy with experience: Benjamin J. Grimm, the ever-lovin' blue-eyed Thing!

Admittedly, the college football star turned daring spaceship pilot turned rock-monster super-hero might not seem like a likely choice for someone who would be totally into sitting around a table pretending to rend wyverns in twain with his +3 Holy Longsword, but c'mon. Ben's best friend in college was Reed Richards, and there's absolutely no possibility that the Marvel Universe's biggest nerd didn't rope him into at least a couple sessions back in the day. And that was before he started cosplaying as Blackbeard.

And then there's the fact that this is a guy who straight up loves fighting monsters. He's a member of the Fantastic Four, which means that his day job is to go to the Negative Zone and

punch Blastaar, and when he's not doing that, he occasionally heads over to Unlimited Class Wrestling to fight guys just for fun. He is a dedicated fan of hitting things.

Plus, he's the kind of stand-up guy who will definitely be down for bringing the pizzas, and every gaming group needs one of those.

Next up we have the Rogue: The sneaky, often devious master of bypassing traps and striking enemies in the back. Clearly, that's a role designed for your friendly neighborhood Spider-Man! 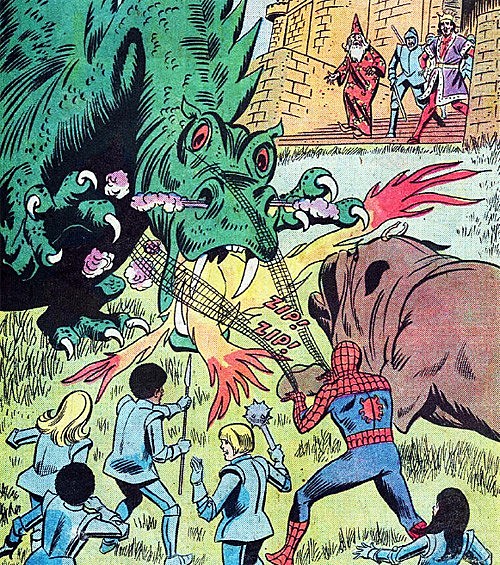 If Reed Richards is the biggest nerd in the Marvel Universe, then Peter Parker clocks in at a close second, and there is nothing you can tell me that will make me believe that he did not pester Uncle Ben and Aunt May to buy him at least a copy of HeroQuest for Christmas when he was 12.

There are only two problems. First up, a world of imagination means that there are no real-world consequences to your actions whatsoever. In other words, this is quite possibly the only time in Spider-Man's life that he would be presented with a world where he has great power with no responsibility whatsoever. As much as Spider-Man is Peter Parker cutting loose and cracking wise, Spider-Man Playing D&D would be that taken to a truly hellacious extreme.

Spider-Man is the kind of player who, when presented with an adventure where the party had to rescue the local Viscount's beautiful daughter from a vampire before he could turn her into his undead minion, would fight his way to the vampire's lair, then backstab the daughter and stuff her body into a Bag of Holding, because you can't turn her into a vampire if she's already dead and the Cleric can Resurrect her tomorrow anyway. I can hear his voice in my head, clear as a bell. "What? I'm Chaotic Neutral!"

For the record, though, that strategy would totally work.

The second, and far worse problem, is that Peter Parker is definitely the most likely to be the mandatory gaming group member who quotes Monty Python constantly, making him both a threat and a menace. But at least he'd be having fun.

Speaking of Clerics, they are the walking bandages that hold adventuring parties together, and there's nobody who fits that role better than J'onn Jonnzz, the Martian Manhunter!

According to Batman, the Martian Manhunter understands group dynamics better than anyone else, and coupled with his selfless concern for others, that makes him a perfect addition to the gaming table. What makes him a great Cleric, though, is that he totally understands how those guys work.

For most adventuring parties -- especially ones that put Spider-Man and his signature bad luck in charge of disarming traps -- The primary duty of a Cleric is to cast healing spells, which is why players often forget that they can also cast stuff like Harm, Flame Strike and spells that invoke the direct intercession of gods. Similarly, the Martian Manhunter is often so busy backing up his running crew in the Justice League and establishing telepathic links and so on that everyone sort of forgets that he has all of Superman's powers, plus he can turn invisible and read your mind.

Of course, that telepathy could make a Dunegon Master reluctant to include J'onn in the game, but he's a solid enough guy that he wouldn't use it to cheat, and besides, there's a way bigger problem for him in this game, namely the fact that it's pretty much built around humans going around slaughtering sentient creatures because they have green skin and a book lists their alignment as "Usually Evil." If he can get past that, though, he's golden.

For our final player, we have the Wizard (or Sorceror or, if you're old, Magic-User), a character class that allows its users to rend the very fabric of reality, unleashing the primal forces of creation and destruction in a process so intense that it makes you almost as good at killing things as the guy who just hits them with a sword. Sound frustrating? It is. Almost as frustrating as being the arms dealer whose only client is COBRA. Just ask Destro.

If there is any better sign that Destro would be into playing Dungeons & Dragons than the scene from G.I. Joe #21 where you find out he has custom-painted miniatures of everyone in the cast, then brother, I don't know what it is. Seriously, a guy who wears missiles on his wrist is a guy who wants to be able to point at something and blow it up.

Now that we have the team together, the only spot left is for the Dungeon Master, who puts together the adventure the players go on, and I'll admit, this one is tough. I considered going with Arcade, because his game would probably be phenomenal, but the downside is that he would probably insist that you LARP your way through it and then attempt to kill you. Dr. Doom has the necessary masterminding skills and the love of fantasy that leads someone to become a wizard and then go back in time to fight King Arthur, but there are only so many dungeons where you help "Sir Victor" kill a homebrew monster named Stretchy Stupidface before that gets real old.

The strongest candidate that I ended up discarding was Amadeus Cho, but trying to outwit problems made up by genius with a hypermathematical mind is enough of a hassle even without having to deal with him informing the players that actual monsters are way tougher than the ones in the book, and his adventure will be adjusted accordingly.

In the end, there was only one best choice: Barbara Gordon, alias Oracle.

Just look at the facts here: She was a librarian, and now she spends her time in a dark room behind a screen orchestrating the actions of a kung fu master named "Black Canary" and a woman named "Huntress" who shoots things with a crossbow. She's pretty much a Dungeon Master already.

Under normal circumstances, I'd cap things off with a picture of the whole gang enjoying a dungeon crawl, but as sad as it is, there exists no art of me, the Thing, Spider-Man, the Martian Manhunter, Destro and Oracle playing D&D. If, however, any of you would like to draw such a thing, send it in to comicsalliance at gmail.com and I'll post it in a future column!