Q: Book your dream traditional Survivor Series match: My Little Pony vs. Pokemon. Which 5, who wins, and what's the elimination order? -- @dannimal

A: Before I answer this one, I just want to point out that I did not make this question up. This was an actual question sent in by an actual reader who wants an answer, no matter how ridiculous that answer might be. And fortunately, Pokemon, My Little Pony: Friendship Is Magic and the world of professional wrestling just happen to be my areas of expertise.

So just remember: You asked for it.For those of you who might not be familiar with it, the "traditional" Survivor Series match as created by the World Wrestling Federation in 1987 is essentially a huge tag-team battle. The twist, though, is that it's two teams of five wrestlers, and it's done elimination style. When a member of a team is eliminated through pinfall or submission, the match doesn't end. Instead, the wrestler is eliminated and the teams continue until every member of a team is eliminated, leaving the other team as -- wait for it -- the survivors.

It's a great gimmick as it allows for a match where the advantage can shift back and forth between the teams with every elimination and the surprise of seeing a team having to carry on and fight back without a critical advantage. Which of course makes it the perfect form for Ponies and Pokemon to settle whatever differences they might have, which -- thankfully -- I have not been asked to provide.

The fact that it's a five-on-five battle makes for an interesting set of problems in picking out the teams, too. With My Little Pony, it's just a matter of figuring out which one of the six main characters gets left out of the match. Assuming, of course, that I'm not allowed to pick Celestia, the Pharaonic God-Empress of Equestria who controls the very sun itself, then the obvious choice for team captain is Twilight Sparkle, who is a) the smartest of the ponies, and b) the one who has magic powers that can defeat a giant bear made of outer space. 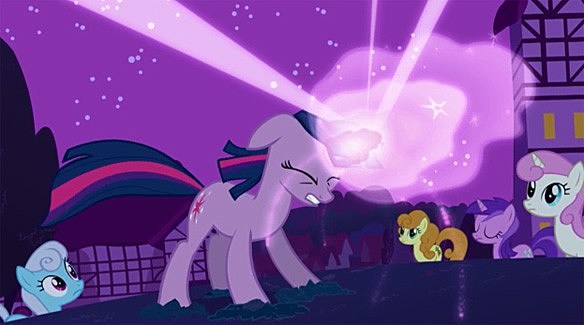 That brings us down to the painfully bashful Fluttershy and the high-class, dress-making Rarity, and Fluttershy pretty much gets in by default. As much as she'd be interested in adding a title belt to her collection of fashions, there's just no way Rarity would want to sully her hands by participating in the actual match. She would, however, be accompanying her team to the ring, because she is unquestionably the Equestrian equivalent of Jim Cornette. 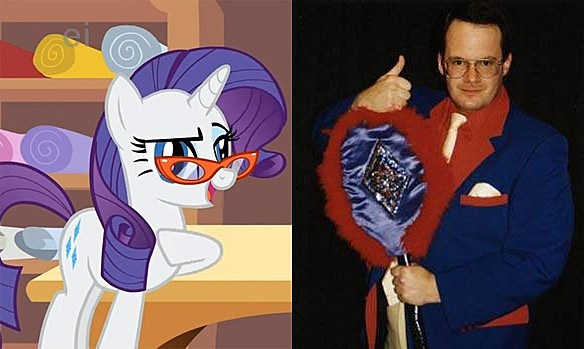 With the Pokemon, though, there's an entirely different problem, in that you're picking from a roster of 649 and narrowing that down to just five is a bit of a hassle. Again, the captain is pretty obvious: Emboar, who is a pig that is on fire that is also a professional wrestler. 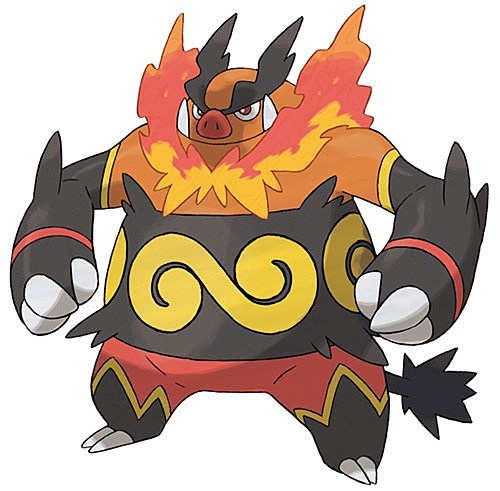 Also, according to the Pokedex, Emboar uses his beard, which is on fire, to set his own hands alight so that he can throw flaming shoryuken punches. And that's awesome.

For the rest of the team, though, I'm just going to throw in a few of my favorites: Bulbasaur (the greatest of all starter Pokemon), Empoleon (a pengin who has swords for hands and looks a little like a luchador), Magikarp (for luck!) and my personal favorite, Snorlax, who only does three things: Sleep, eat, and kick ass.

And now that we've got the roster set, we're ready for the match.

As the match kicks off, Emboar leads off for Team Pokemon, while Twilight Sparkle chooses to hang back, sending in Applejack as her first combatant, hoping that AJ's strong kicks (as seen in episode 4, "Applebuck Season") will buy her time to examine her enemies and strategize a plan for victory.

Unfortunately for Twilight, things don't go exactly as planned. At a Sir Mix-A-Lot approved 5'3" and 330 pounds, Emboar is built like the Kingpin, if the Kingpin was also literally on fire. Despite leg strength built from a lifetime of hauling apple carts around the farm, AJ just can't bring him down, and only serves to set herself up for Emboar's signature Heat Crash, which hits so hard that none of her teammates can make the save when he goes for the pin.

With her team suddenly at a disadvantage, Twilight shocks the opposing team and the entire the crowd by sending in... 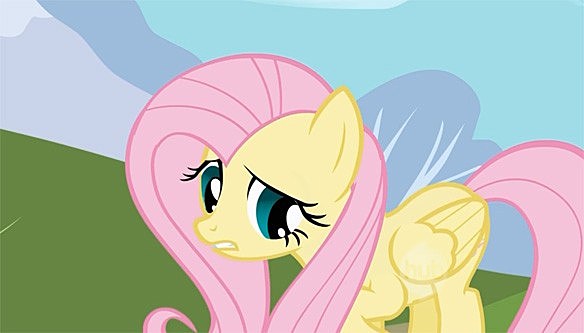 There's a brief moment of speculation on whether or not Fluttershy's ability to mentally control animals (episode 17, "The Staremaster") also works on Pokemon, but we never get to find out, as the minute she's faced with being in the ring with a massive firebreathing pig-wrestler trying to knock her out and a crowd full of people watching, she bursts into tears and taps out without Emboar even taking a step towards her.

This, however is all part of Twilight Sparkle's master plan. As we all know from episode 5, "Griffon the Brush-Off," no one makes Fluttershy cry without getting dealt with Pinkie Pie style.

Emboar is suddenly confronted with a whirling cotton candy tornado. Even with Emboar's expertise in both fighting and setting moving targets on fire, Pinkie Pie is able to dodge using her psychic precognitive powers (episode 15, "Feeling Pinkie Keen"). And if there's one thing a fighting type like Emboar is weak to, it's psychic powers -- Pinkie Pie makes short, shocking work of Emboar before he can even make a tag, and Team Pokemon loses its captain to a sudden three-count.

Empoleon rushes the ring in an attempt to drop Pinkie Pie with Giga Impact, but not only does he miss, but Pinkie manages to pin him in a record three seconds, warping reality around her in an impressive yet surreal display. How? 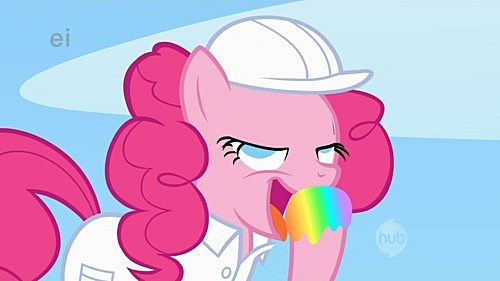 Pinkie Pie eats rainbows. That's how. You can't even confront that kind of power.

At this point, Team Pokemon sends in their big gun: The Road-Blockin', Flute-Rockin, Big and Round, Smackin' Down, Sleepin', eatin', jabroni-beatin' People's Champ, Snorlax! 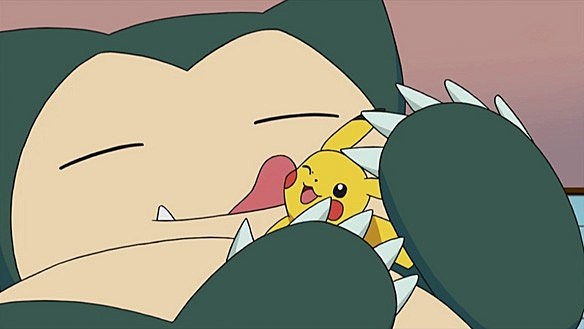 Pinkie Pie may have been able to avoid her other two opponents, but with the scent of cupcakes still lingering in her mane from her day job at a bakery, there's no avoiding Snorlax when the hunger is upon him, and, mistaking her for an unusually mobile food source, he attempts to have her for a mid-match snack.

Fortunately for Pinkie, this only just tickles, but while laughing, she taps out, awarding Snorlax a victory even as he falls asleep, facedown in the middle of the ring.

Snorlax's penchant for naps now presents an entirely new problem for both sides: He's asleep, but too far away from the corner for either of his remaning teammates to tag in, and so heavy that he can't be rolled over for the Ponies to get a pin. Twilight Sparkle herself takes to the ring, attempting to use her unicorn telekinesis to flip him over, but she just can't do it.

Finally, fed up with not seeing any action, Rainbow Dash tags herself in when Twilight wanders over to the corner to do some thinking, and starts flying around the sleeping Snorlax fast enough to create a tornado. Steel chairs start flying and the fans hold on as the wind whips up, but Snorlax himself remains firmly planeted, until the ring itself rises into the air, tilting and dumping him unceremoniously onto the floor. He's then counted out without ever waking up.

As the tornado dies down, Bulbasaur vaults into the ring, lashing out at Rainbow Dash with his vines in an effort to bring her down to the mat where she'll lose her aerial advantage. He manages to land a hit, wrapping the vines around her, but the plan backfires --- without pinning her wings, Bulbasaur's just tied himself to one of Equestria's best flyers, and is taken on a flight that ends with him being spiked facefirst into the mat as Dash lands to get the pin, leaving only one Pokemon left.

Magikarp enters the ring. Magikarp uses splash. But nothing happens.

Rainbow Dash, confident from the thrill of victory, boasts that she's about to end this match in ten seconds flat, but that's when Twilight Sparkle notices that Magikarp's got a foreign object. Suddenly she understands what's going on -- it's an Exp. Share, and the whole time the rest of his team has been fighting, Magikarp has been gaining experience from the battle.

And now, that experience is paying off: Magikarp is evolving. 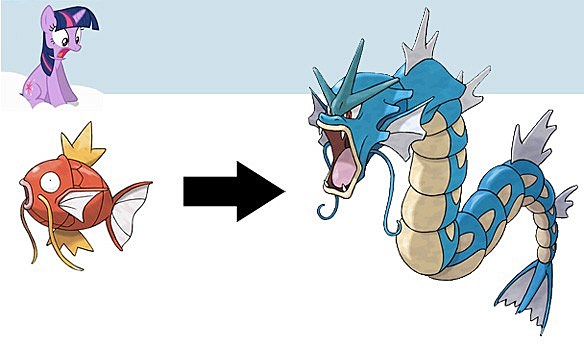 Twilight tries to warn Rainbow Dash, but it's too late; she flies right into a Hyper Beam and gets instantly KOed.

Now it's all down to Twilight, and while her magic is strong, she's no match for a rampaging dragon without her friends by her side.

Thus, Twilight and her team are narrowly defeated by Team Pokemon, but more importantly, they learn a lesson about how it's better for friends to deal with their problems together rather than trying to face everything alone, and also that you shouldn't judge someone just because of their looks, even if they look strange or different. And really, that's far more important.

And this is, without question, the strangest, nerdiest, and most completely inaccessible Ask Chris of all time. In fact, I'm pretty sure that if you managed to make it this far, you deserve a little something extra, which is why I asked my pal Jen Vaughn to illustrate just how insane this match-up would be: 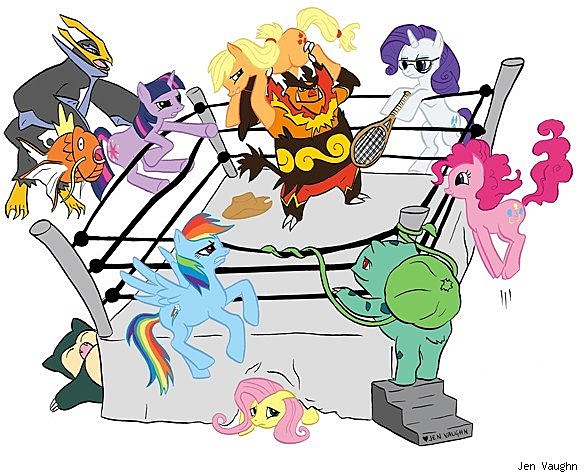