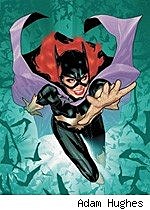 A: If DC's goal with their reboot was to get people talking about their books again, then they've certainly succeeded on that front. Ever since the announcements came down, it seems like the impending DC Universe relaunch is the only thing anyone's been talking about. And aside from, you know, those new costumes, the one piece of the reboot that's sparked the most discussion and debate has been Barbara Gordon returning to her role as Batgirl, and apparently ditching her Oracle identity and the spinal injury that paralyzed her legs along with it.

It's not a surprise that it would prompt such a huge reaction, either. No matter what her codename is, Barbara Gordon is a character that a lot of people have a pretty strong attachment to, something that ComicsAlliance's own Andy Khouri tackled in his rundown of this very subject. And unsurprisingly, I've also got opinions on the matter.First up, I have to say that I like Batgirl -- and specifically Barbara Gordon as Batgirl -- a heck of a lot, which I know comes as a shock to absolutely nobody. The idea of Batman inspiring other people to follow in his footsteps is one that I've talked about quite a bit with regards to Dick Grayson and the other Robins, but with Batgirl, there's a completely different set of elements at play that comes from the fact that she's Commissioner Gordon's daughter.

There's a pretty complex web of influences for Batgirl, but it all hinges on the idea that after the murder of Thomas and Martha Wayne, Gotham City is so far gone into crime and corruption that it requires Batman. In any other city, a guy as honest and tough as Jim Gordon would be enough to pull it back from the brink, but without Batman, there's too much even for him. Without Batman's influence, both direct and indirect, Lieutenant Gordon -- who is, for all intents and purposes, the only honest cop in Gotham City -- gets two in the back of the head in a parking garage and serves as nothing more than a warning to everyone else to stay in line if they know what's good for them.

With Batman, however, there's a change in Gotham City that allows for someone like Gordon to thrive. Batman is the force behind it who acts outside the law, but Gordon is the law; the incorruptible force of justice in human form, complete with a sweet moustache. 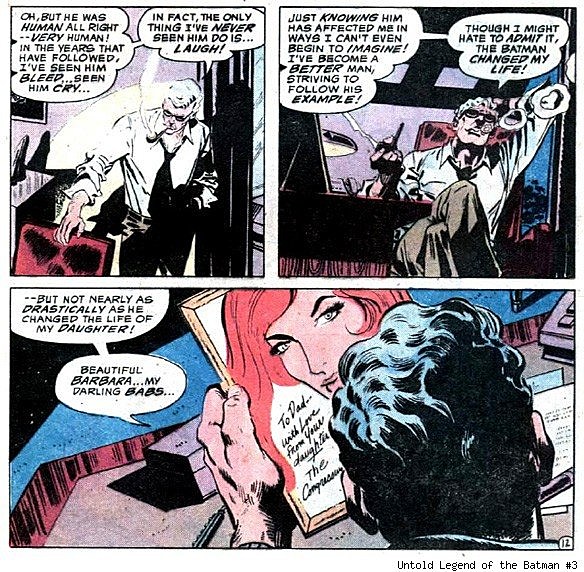 And that -- all of it -- is something that Barbara understands. She learns from her father what it means to do good, and gets his drive to do the right thing, but she also gets that she lives in a world where becoming a costumed crime-fighter is quite possibly the best way for her to do that.

What's more -- and this is the important part -- she does it on her own. She doesn't get taken to the cave and trained by the world's greatest detective, and she doesn't even undergo the kind of training her father had, although his status as the police commissioner certainly does provide a nice storytelling loophole for how she got equipment and knowledge. Instead, through determination and an incredible amount of intelligence, she becomes one of the few characters (along with the original Batwoman, in whose footsteps she definitely walked as a character) who looks at what Batman is doing and says, "Yeah, that's the way to do it. I can totally do that." And she does.

In that respect, she's arguably as much of an aspirational character as Batman himself is, with the added bonus that, like newer characters like Tim Drake, she does it without a motivating tragedy. 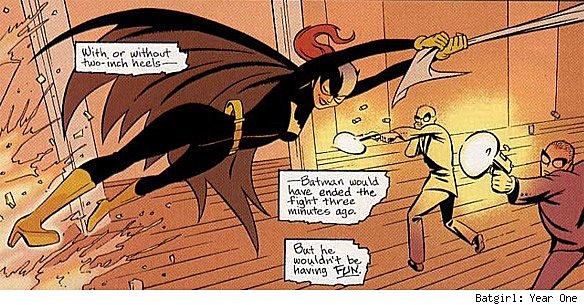 She just decides to do it because she genuinely believes it's the right thing to do.

Also, it's worth noting that she has what is unquestionably one of the best costumes in comic book history. 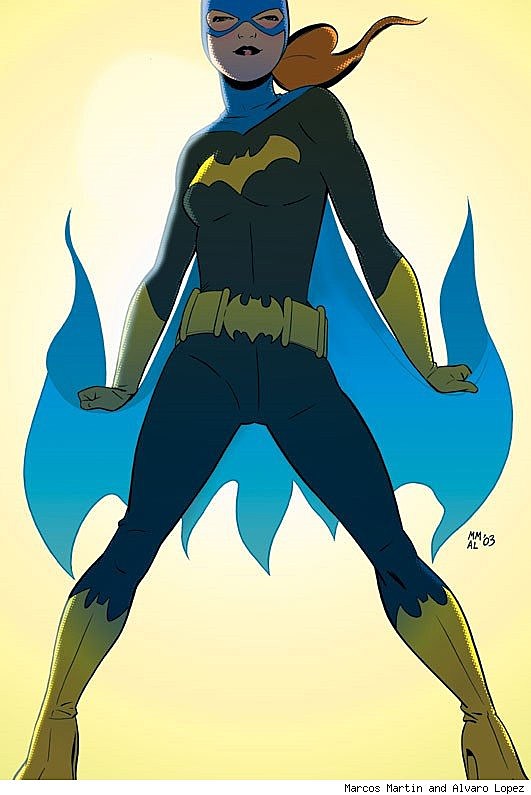 Seriously. That one's up there with Spider-Man and Mr. Miracle.

But here's the thing: I also love Barbara Gordon as Oracle. 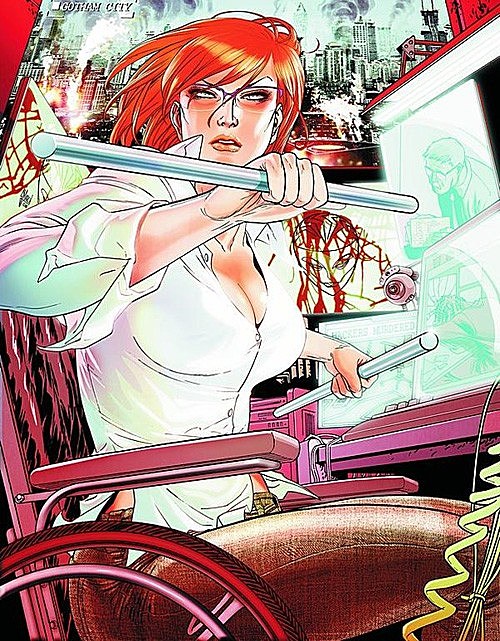 If Barbara Gordon is an aspirational figure as Batgirl, she's exponentially more so as Oracle. There's a value that she has as a woman in a wheelchair that she just doesn't have as a sidekick to Batman, no matter how much of a good sidekick she is.

One of the things I really like about the Batman characters is that they all tend to represent an idea of surpassing limitations to become something greater than just a person, and in the aftermath of her injury, that's exactly what Barbara Gordon did. It's genuinely significant for comics that rather than just being cast aside or reverted, her new status quo in the wake of The Killing Joke was embraced by creators like John Ostrander (writer of Suicide Squad, where she made her first appearance as Oracle) and Chuck Dixon (the original writer of Birds of Prey) and Grant Morrison (who made Oracle a full-fledged member of the Justice League) and used very prominently.

Oracle is a super-hero. A different kind of super-hero than Batgirl, yes, but one that's equally valid by any standards, and the fact that she becomes one a second time by conquering a limitation sends a very powerful and very necessary message to the readers about what that sort of heroism really means. Especially when you consider that the change came at the perfect time, when the rise of the Internet to incredible prominence in modern life made her status as a hacker and information broker something that readers could easily relate to and understand. In an "Information Age" (I'm borrowing the quotation marks from Jack Kirby), it makes perfect sense that Batman and the JLA would have someone whose focus was on gathering intelligence and dealing it out to devastating effect.

Of course, at the same time, DC has created a universe where it makes absolutely no sense at all for her to not be able to walk.

That's the problem with bringing in "realistic" elements into super-hero stories. As much as I'm all for using events like the ones in Killing Joke to build characters and spin into something new -- which is exactly what they did with Oracle -- there's also the fact that Barbara Gordon lives in a world where people have access to phenomenal sci-fi technology from alien worlds and super-advanced societies, Purple Healing Rays, Green Lantern Rings, Lazarus Pits... The list goes on for days, and that's without even bringing up how Bruce Wayne recovered from his own paralyzing spinal injury by having his psychic girlfriend/physical therapist think really hard at his back. That happened. And they live in the same town.

Beyond that, there are advanced robot limbs all over the place. Arsenal got a robot arm like two days after hehis was severed, and Cyborg, a character that was around seven years before Barbara Gordon was paralyzed? All of his limbs are robot limbs.

I mean, they're everywhere. Here's a scene from the latest issue of Detective Comics, the very book in which Barbara made her first appearance: 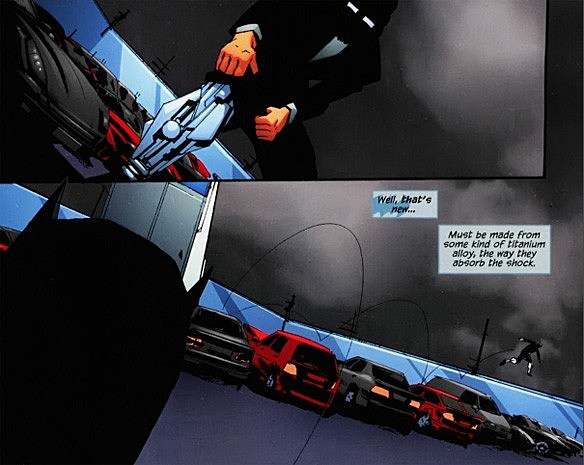 Really. You're telling me that dude, a car thief, has robot legs, but Barbara Gordon, who is friends with the richest man on the planet who by the way also knows Superman can't get a set? Really. Really.

That said, it's equally obvious that these are not real people. They're characters in a story, and if Barbara Gordon as a character has more value as a prominent disabled super-heroine -- which I think she does -- then it's a perfectly valid choice on the part of DC to leave her that way. The problem is that it becomes increasingly difficult to explain why she wouldn't opt for one of a million solutions (she knows where the Lazarus Pits are, you guys!) and then just stay as Oracle anyway.

Which raises another question about the entire situation: Why should Barbara Gordon go back to being Batgirl, rather than just remaining as Oracle? And that's not as in "why would she choose to do that," but rather "why would DC do that?"

If there's one thing the DC Universe has a surplus of right now, it's female Batman Family characters. They've been set to launch Batwoman in a new series for months, and even beyond her, they've got Stephanie Brown and Cassandra Cain ready to step back into the Batgirl role. The only thing wrong with Stephanie Brown is her costume (which would fit right in with the '90s fashion revival going on over there) and if you absolutely have to take her out of the role, then Cassandra Cain's only just recently come back after a nice year-long sojourn in limbo under the codename "Black Bat" which, c'mon, is not great.

Plus, at this point, Barbara Gordon has been Oracle (1989 to 2011) just as long as she was Batgirl (1966 to 1988). While a rollback isn't unprecedented -- just ask Wally West and Kyle Rayner -- it's not like there's a built-in excuse of one version having an established tenure over another.

So what does DC get out of it? Well, recognition from a wider audience, one assumes. Barbara Gordon as Batgirl has been featured in three different mass-media projects, including Batman '66... 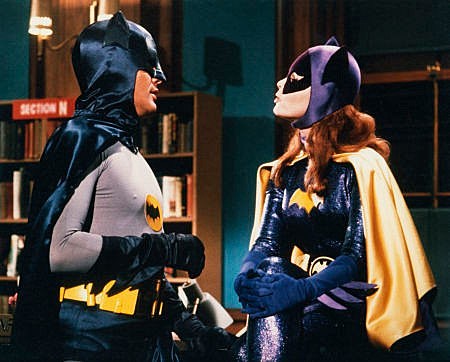 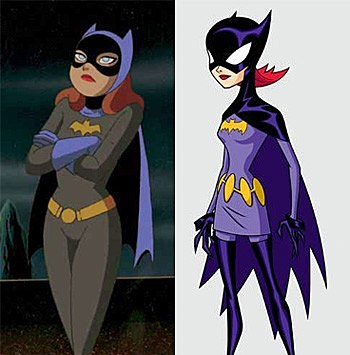 Barbara Gordon as Oracle, however, only really has the Arkham Asylum video game and the short-lived Birds of Prey series to her credit. And that last one might actually count against her.

As for which one I'd go with if I had my way, it's hard to say. I like both versions of the character an awful lot, and I really enjoy both aspects for what they represent. But I will say that in a line of comics that also features Dick Grayson as Nightwing, Jason Todd as the Red Hood and a completely unrelated red-haired Batwoman, Barbara Gordon still being Batgirl doesn't really work.

There is, however, another possibility that I haven't seen anyone addressing, and it's one that would allow DC to have it both ways: The idea of Barbara Gordon, Oracle, acting as Batman, Inc.'s representative in a new role as the Batman of the Internet: 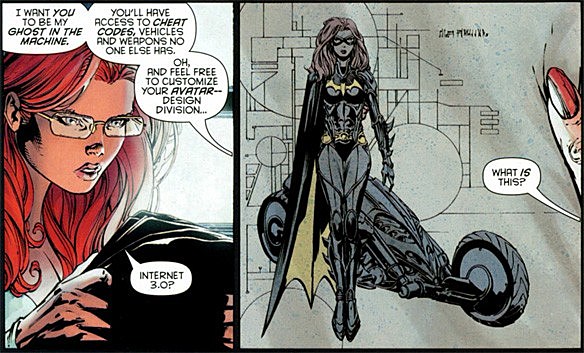 Of all the concepts introduced in Batman: The Return and Batman, Inc., the idea of Barbara Gordon lightcycling around a crazy Tron'd up cyberhacker firewall Acid Burn Zero Cool virtual reality Internet was the one that I had the most doubts about. I can totally see DC just wiping the slate clean and moving onto someone else's idea of what Batgirl should be, but at the same time, we already know that Batman Inc. is surviving the relaunch with a return in 2012, so even if it's not likely, it's a definite possibility.

Then again, that still leaves the other Batgirls out in the cold, and an entire series about Barbara Gordon ReBooting into the Game Cubes of the Matrix seems like it would be pretty limiting if it went on for more than a few issues. And if that's the case, rebranding the character as Batgirl rather than Oracle seems like the sort of compromise that isn't going to make anyone happy.