A: Of all the concepts that could've only come out of the kid-friendly kookiness of the Silver Age, the Legion of Super-Pets is right up there with the sheer existence of Jimmy Olsen for being the most ridiculous. As for trying to figure out which one is the greatest, well, that presents a unique challenge, mostly because they tend to be either boring or straight up creeps.

To find out which one's actually good, you've got to work backwards, and in the classic lineup of the Legion of Super-Pets, the first candidate for elimination is undoubtedly Comet the Super-Horse, mostly because he's not actually a horse.

I went through this a while back (as has pretty much anyone else with a stack of back issues and a website), but since it's one of the strangest pieces of the entire Silver Age, it bears repeating: See, Comet is actually that most loathsome creature, the Centaur. Specifically, he's a centaur named Biron who was cursed into full-on equestrianism back in Ancient Greece, and was subsequently exiled to space for a few thousand years. After he came back to Earth (thanks to Supergirl's rocketship knocking his asteroid out of its curse-mandated orbit), he decided that, instead of informing any of the telepathic characters around him that he was a dude trapped in the body of a horse, he'd just become Supergirl's pet and let her ride him around, because he was in love with her.

And just in case that wasn't weird enough, whenever a particular comet passed by Earth, he'd turn into a dude, during which time he would adopt the alias of "Bronco" Bill Starr, a rodeo clown who would ride other horses in order to impress Supergirl, then make out with her in the brief time before he turned back into a horse and went back to letting her ride around on his back.

I cannot for the life of me figure out how they thought any of this was even remotely okay.

But while Comet might be the most well-known, Proty is even weirder. 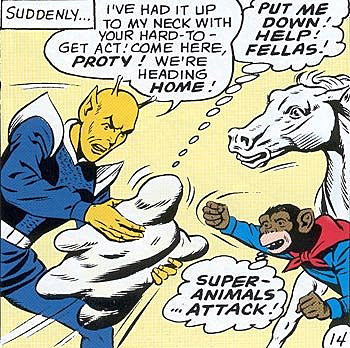 Originally introduced as a pet for the Legion of Super-Heroes' Chameleon Boy, Proty was a telepathic blob of shapeshifting protoplasm. By any sort of sci-fi standards, that's not particularly remarkable, but just wait.

For all its Silver Age signatures, the Legion of Super-Heroes was actually one of the most forward-thinking franchises of the time, probably because it was relatively isolated from the rest of the DC Universe. As such, it was one of the first DC books to really incorporate stuff like killing off cast members, only to have them return later. Specifically, their pioneer in resurrection was Lightning Lad, who sacrificed his life only to be brought back when the rest of the Legion stood around waiting to be struck by lightning so that their life force would revive him. In the end, Proty knocked out Saturn Girl -- Lightning Lad's girlfriend -- and took her place, with everyone mourning his noble passing.

He was then replaced by yet another completely identical blob of protoplasm with the imaginative name of "Proty II," but that's not the weird part. Take it away, Wikipedia:

In a post-Crisis on Infinite Earths retcon, it was revealed that the original Proty did not die saving Lightning Lad's life. In reality, Proty's life force was transferred into the body of Garth Ranzz, and Proty lived his life as Garth from that point forward. The true Garth was never revived.

What is it with these dudes and pets pretending to be other people so that they can get with teenage blondes?! I gotta say, the Legion of Super-Pets is downright revolting. 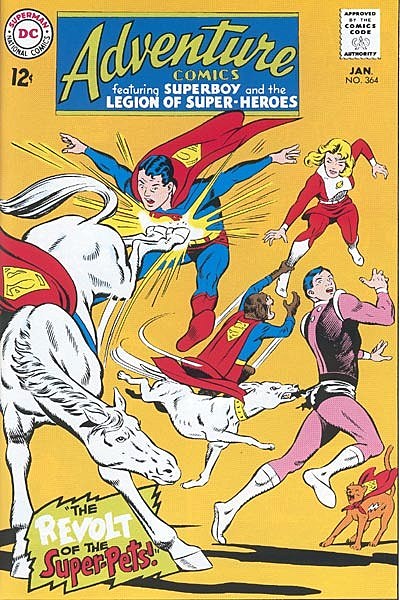 Incidentally, Proty II -- the one in the panels above -- would later go on to be a full-fledged Legionnaire, which puts the entire concept of being a "pet" into some pretty shady territory.

As forthe other Super-Pets, I've got to confess that they just don't do a whole lot for me. I mean, Krypto's all right, but Beppo the Super-Monkey?! An alien astronaut test monkey rocketed to Earth from a dying planet? That sounds awesome! There's like five things I like in that sentence! He should be one of the greatest characters in comic book history, but he just doesn't live up to the potential.

If it's between those guys -- er, pets -- then I'm going to give it to Streaky, if for no other reason than his awesome lightning bolt fur and the fact that he once punched out a master of space karate. 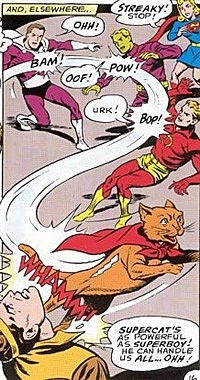 Honestly, in an era when the Internet has proven that people love nothing more than looking at pictures of cats, I will never understand why Streaky isn't holding down two monthly ongoing series.

So for that crowd, Streaky definitely wins. If, however, you open it up to all of the Silver Age DC pet sidekicks, things get a little more interesting.

Look. I would love to tell you that Ace the Bat-Hound is the greatest of all pet sidekicks and an intrinsic part of the Batman mythos, but I can't. Don't get me wrong, I love the idea of Batman having a dog that wears a mask to protect its identity: 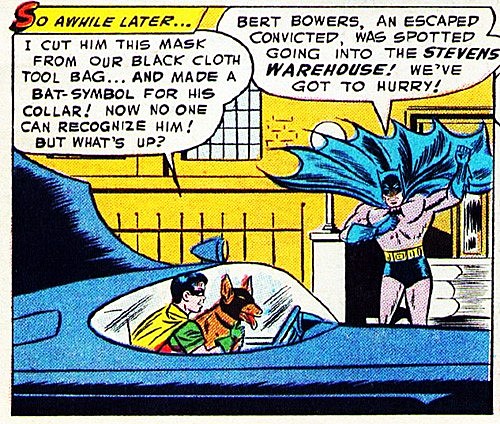 The fact of the matter is, though, Ace just doesn't do much. I think he sniffed out a hobo once, but that's about the extent of his contribution to Batman's crime-fighting career. And really, I'm pretty sure Batman could've sniffed out a hobo himself. This is Batman we're talking about here. He has honed his skills with the greatest hobo-sniffers in the world.

So as much as it pains me to admit it, this is one area where, of all people, Aquaman has managed to score the victory with his pet sidekick, Topo the Octopus:

I've become familiar with Topo thanks to the tireless resarch of leading Aquamanologist Tom Katers, who makes a pretty convincing argument for Topo being awesome. For one thing, as seen above, he's almost as good as Green Arrow at using bows.

If this were an isolated incident, I'd take the fact that Green Arrow is only slightly better than an octopus as a better example that Green Arrow kind of sucks than as a recommendation for Topo's skills, but this is only one of his many skills, including rocking out... 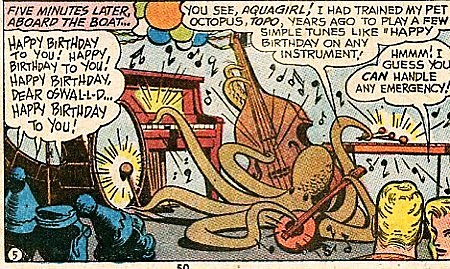 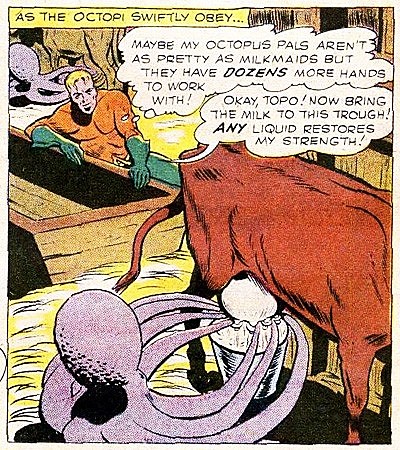 Clearly, Topo rules. I have to say, though, the fact that Aquaman's reaction to this incredible show of skill is to about how he's "not as pretty as a milkmaid," without even remembering his name? What a jerk.

Aquaman doesn't deserve you, Topo. And the Batcave has an underground river. Think about it.

A: I can't, but I think the fine folks at Archie Comics can: 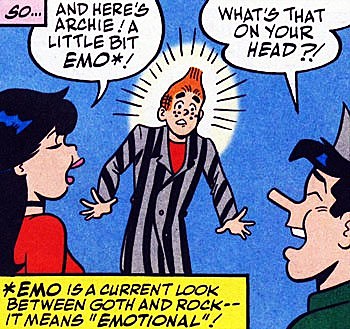