Q: Define "the Batman Family." Isn't the whole idea a contradiction when the main character is a violent loner? -- @Mike_Donachie

A: Hang on one second: You're telling me that this week, I've got a question I can answer by telling someone that they're totally wrong, and it's about Batman? Folks, Christmas has come early to ComicsAlliance, because this may in fact be the perfect Ask Chris question. So perfect that I almost hate to do this to you, but since you've set me up so nicely: Mike, you're totally wrong. 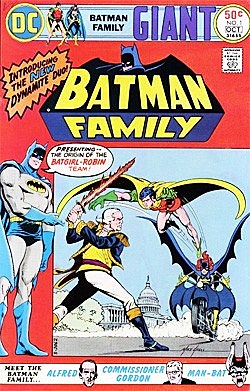 Well, you're half-wrong, anyway. I mean, nobody in their right mind would argue that Batman's not violent. The man just flat-out loves to punch criminals, to the point where it's more or less become one of the most defining aspects of the character. I mean, he might be the World's Greatest Detective, but when you get right down to it, that's usually just a way to find out which person in Gotham City is the one who currently needs a good, solid smack in the mouth. Hell, they made two video games that sold millions of copies based almost entirely on that premise.

Of course, there's more to that violence than just the satisfying crunch of fist on thug, but I'll come back to that for a minute. The point is, given the past 70 years of Batman comics, it's impossible to argue that Batman's not violent.

But given the past 70 years of Batman comics, it's also impossible to argue that Batman's a loner. He can certainly be portrayed as self-reliant and as operating on his own, and he works very well in that sort of story, but a loner? Batman hasn't been a loner since 1940, when Bob Kane, Bill Finger and Jerry Robinson introduced Robin -- less than one year after the creation of Batman himself.

And that addition, right at the very beginning of what would grow to become Batman as we know him today, certainly wasn't the last. After Robin became the Sensational Character Find of 1940, Batman went on to have a ton of other sidekicks, partners, teammates, proteges, allies, surrogate parents... the dude even has a dog. And why? Because when you take them all together, they make up exactly what you asked about, and exactly what they were called in the comics: The Batman Family.

The idea of Family sits at the center of the concept of Batman, and not just because he uses his Family fortune to fight crime from a secret lair beneath his Family home, although those are part of it. Everything about the character's motivations and actions revolves around it, because it's all set in motion by the loss of Bruce Wayne's family: 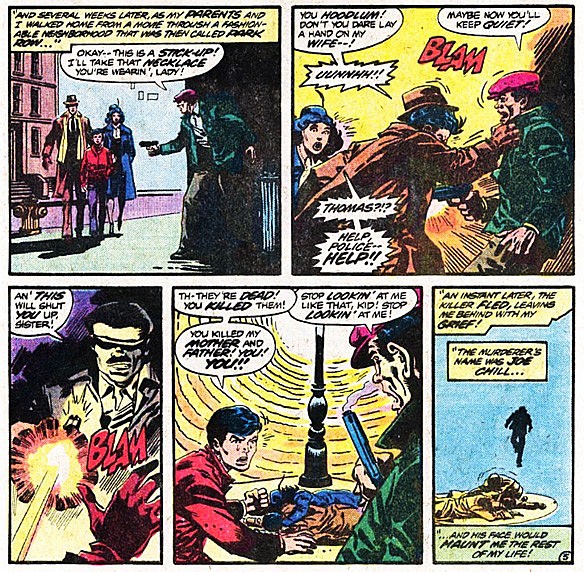 As I've mentioned before (even illustrating it with that same sequence of panels above, from Untold Legend of the Batman #1), there are very few things I think are quite so wrong-headed as stories where Bruce Wayne is an unhappy kid before the death of his parents. Those stories completely miss the point of what happens to him when his parents die -- there has to be a change for Bruce Wayne, and if he's going to do something as extreme as putting on a costume and dedicating his life to fighting crime, then the change has to be equally extreme.

In other words, Li'l Bruce Wayne's life has to be perfect, and it has to be that way because of his parents -- his Family -- so that it can be completely and irreparably shattered when they're taken away from him. It's a brilliant narrative device because there's so much metaphorical baggage that comes along with the idea of parents: Safety. Comfort. Love. Family.

That's the moment that defines Bruce Wayne's life and dedicating his life to crimefighting. There's a beauty to that, maybe the thing that I love the most about Batman and how he works, that he's young enough to decide that ending crime is something he can actually do, and that the comics are built around him in such a way that he can actually have a pretty good shot at doing just that, all based on the simple idea that he is fully, keenly aware of what Crime can take away from a person. For Bruce Wayne, it's not even a question of whether or not he can do it; he can't not do it, because to let anyone else suffer a loss like he did is unthinkable.

And that brings us back, for a moment at least, to the idea of Batman as violent. He definitely is, but unlike the criminals that he faces, his violence is a means, not an end unto itself. Batman's not a character that's hell-bent on revenge. There's a little of that in there, sure, but it's not the focus in the way that it is for a character like the Punisher. The fact that he doesn't use guns, that he doesn't kill, that he rescues people from danger rather than just hunting down the guilty, it all points to something other than just simple vengeance.

Regardless of why those aspects were included in the stories, whether they were put there just to distinguish him from the Shadow or to make him more appealing to kids, in the context of the story, they all come together to take on a new meaning: Batman does things differently than the criminals, and so his violence is, at least in its intent, a different kind of violence. He's not a guy out to just get his kicks and satisfy his own need for revenge, a common misconception among people who want to sound smart without actually reading the stories, because that kind of self-serving violence is what created him, and what he set his life to opposing. Every act of violence that Batman commits, and every act of violence that he endures, is done in service of others.

Specifically, it's so that they don't have to suffer the way that he did. And if we can apply that logic to the way Batman fights, we can apply it to the rest of his life too, because it all goes back to that same motivation: The loss of Family.

Which brings us to Robin, and one of the most important and enduring examples of how the concept of Family affects Batman. 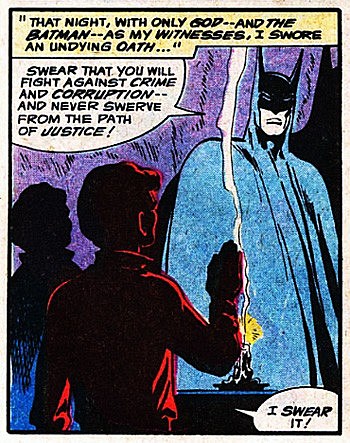 I've written about this pretty extensively before, but it's very, very important that when Batman meets Dick Grayson, he's essentially in the same situation that Bruce Wayne himself was in as a child. He's just seen his parents murdered. He's lost his family in a way that perfectly echoes the tragedy that drives Batman, but with one crucial difference: When Bruce Wayne's parents died, there was no Batman to help him. When Dick Grayson's parents die, there is.

Batman doesn't just help Dick track down the guy who killed his parents, he adopts him. He takes him in. Batman takes the place of his family, and in doing so, Batman also takes the first step in rebuilding his own family. And as a result, in one of the most brilliant evolutions of a character ever, Dick Grayson grows up to be a very different person than Bruce Wayne.

And from there, it expanded. The next family member was, of course, Alfred -- his family servant -- but over the next couple of decades, the idea of Bruce Wayne creating a surrogate family to deal with the loss of his parents was literalized in the way that only the Silver Age could do it. Specifically, they brought in a pair of obscure characters that, here in the 21st Century, have been all but forgotten.

The first was Bruce's Uncle Philip, a world-traveling explorer who got custody of Bruce after his parents died. I've never liked the idea of Uncle Philip, especially since he was mainly created for the sole purpose of explaining how this orphaned eight -ear-old was able to travel around the world learning to be a karate detective. The whole idea of Bruce actually having living relatives that he can go be with after his parents get killed softens the tragedy in a way I just don't like -- to be as effective as they need to be, Thomas and Martha Wayne need to represent all there is of the Wayne family.

The other character was Mrs. Chilton, and she is one of the all-time greatest examples of the Silver Age taking a concept to a hilariously ludicrous extreme. 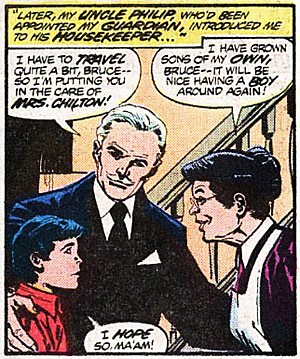 Why? Because Mrs. Chilton, the kindly Wayne family housekeeper who raised Bruce Wayne as her own son with the loving kindness of a saint, was actually the mother of Joe Chill, the man who murdered Bruce Wayne's parents. Completely. Insane. But at the same time, it's a great example of the focus that the creators of those stories had on the idea of Family as a driving force for the story of Batman.

Again, those characters aren't really all that appealing in the context of the greater story. There's a reason they've fallen into obscurity and been more or less excised from the elements that make up the "official" version of Batman. They both blunt the driving tragedy, and lessen the impact of the changes to Bruce's life after the murder of his parents. The shadow of his parents' murder needs to hang over Bruce's life, at least until he becomes Batman -- otherwise, the motivation to actually become Batman is lessened.

But once he's reached that point, we return to the idea that he can build a family of his own, and it's a family of his choosing. Robin, Batgirl, Alfred, Leslie Thompkins, even his alliances with characters like Superman and Commissioner Gordon are often played as being more than just "business partners." At the very least, they're friendships. Just like we do in our own lives, Batman builds a family as an adult that goes far beyond his actual relatives. And when you look at it as a family, it becomes an interesting reflection of what he does in the role of Batman. Crime takes away his family, so he builds a new family in order to better fight crime.

It's such an intrinsic aspect of who Batman is and what makes up his personality that it's almost impossible to separate it out from the rest of the character, even in versions that focus on Batman as being a singular hero. Christopher Nolan's movies are a great example. He's said before that he has no intention at all of putting Robin into his films, but the relationships between Batman, Lucius Fox and especially Alfred are played as extremely familial.

Since Bruce Wayne became Batman, he's never been alone. He's always had someone there for him, from Alfred all the way down to the Outsiders. So I'd define the Batman Family in the same way that I'd define my own. We all form and keep relationships in order to make our own personal worlds better, and so does Batman. He just happens to have a lot more capes in his.