Q: Count Dante vs Charles Atlas. Which one reigns supreme in having the best ads in comics? -- @chudleycannons

A: As much as I love the stories in old comics, one of the great pleasures of reading through the back issues of the '60s and '70s is seeing the ads. There was a ton of bizarre stuff on offer back in the day, and as much as I'm all for the acceptance of comics into the mainstream, I have a lot of unearned nostalgia for the days when super-hero adventures were partially funded by the secrets of the Dim Mak Death Touch.

But as for which of the two icons of that era reigns supreme, there's no question in my mind: Count Juan Raphael Dante, The Deadliest Man Alive.To see why, you just have to take a look at the ads themselves. Let's start with the Charles Atlas Dynamic Tension System: 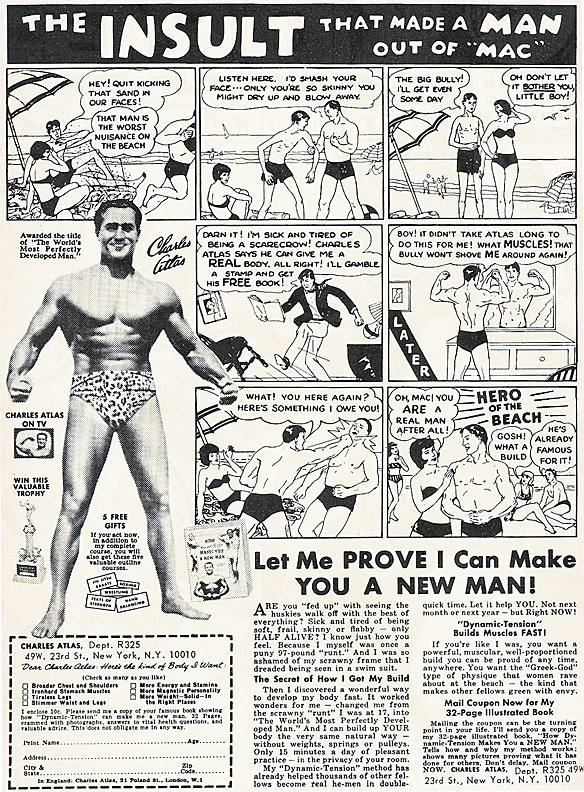 This page is unquestionably the single most iconic comic book advertisement of all time. It ran in comics for sixty years in one form or another, starting in the '40s and continuing until at least a few years ago, when I saw one plastered on the back cover of Savage Dragon. They managed to outlive even Atlas himself, and the only real change was the addition of the URL for CharlesAtlas.com, where you can learn the first few secrets of Dynamic Tension for free. As far as comic book imagery goes, this thing's right up there with Superman's cape, a word balloon and a big ol' burst that says "POW!"

It's easy to see why, too. The comic strip style structure apes the medium, and the offer of literally transforming yourself into a bigger, stronger version of yourself to get revenge on your enemies is the exact same sort of escapist fantasy that super-heroes have been indulging in since they started. Atlas's offer is essentially a magic word that can turn you into a super-hero with "the 'Greek-God' type of physique." It's as much of a super-hero power fantasy as you can get, to the point where the dude is actually wearing tights in the photograph. He might as well be selling Super-Soldier serum and Vita-Rays.

That said, I've never been a big fan.

Regular readers of this column may have noticed that I tend to over-analyze things just a bit, and the "The Insult That Made a Man Out of Mac" -- which was based on Atlas's own experiences as a skinny kid who bulked himself up in the name of Total Beach Dominance -- is no exception. And folks, it might be a great ad, but as a narrative, it is pretty crucially flawed.

The one thing that really jumps out at me with this ad is that it's got a pretty confrontational tone for something that's trying to sell you a product. Everything that happens in this ad can basically be summed up as "Hey kid! You suck, but I can make you suck less!" It comes to a head in Panel 3, where Atlas, through the voice of Mac's lady-friend, gets downright insulting: 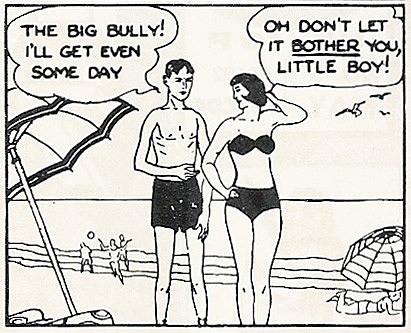 All right, first of all, that girl's a total jerk. Mac stood up to that guy for kicking sand in her face and that's the thanks he gets? Whatever, lady. He deserves better.

Secondly, it's not just portraying the Mac (and by extension, the reader) as powerless, it goes all the way to straight up verbally emasculating. This goes far beyond just the frustration of the big guy being a jerk, it's set up with an admirably shameless precision to convey those feelings of embarrassment and helplessness. It's a masterful bit of manipulation.

So Mac gambles his stamp, and a tellingly unspecified amount of time later, he has transformed into a new physique. So what does he do? 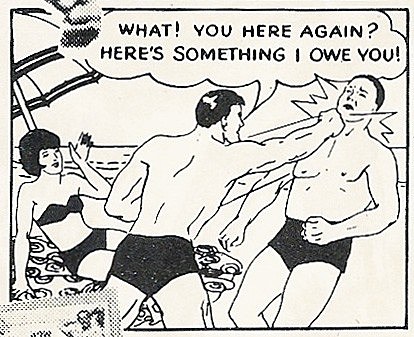 He goes to the beach and gets his revenge. He's not defending anyone in this panel, there's nothing but vengeance in his actions. But the thing is, by going down to the beach and just cold-cocking someone in the face, he has become the very thing that he hated. He is a dude who goes to the beach and pushes people around with his superior strength because now he can. In that respect, the ad isn't just manipulative, it plays on the desire of the powerless to become powerful not in the name of equality, but in the name of oppressing others in the same way that they themselves were oppressed. It's brutal.

Oh, and he gets that fickle Jezebel back, for whatever that's worth: 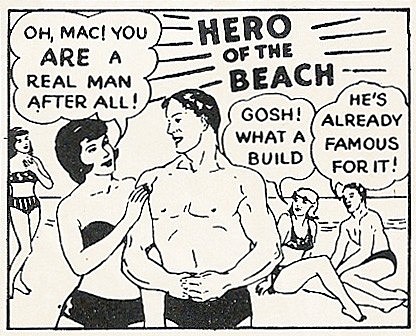 Despite the words floating over his head, there's nothing heroic about Mac's actions. He learns nothing, and the simple truth that his world revolves around is that the strong abuse the weak at their leisure. You know what kind of character deals with a defeat by plotting revenge and returning to show them, show them all? It ain't the hero.

Seriously, if this comic had been published by Marvel, there would've been an eighth panel where Mac's uncle got murdered while he was out flexing on the beach. At least then there'd be a moral.

So yeah, the Atlas ad doesn't do a whole lot for me. But Count Dante? Count Dante is poetry. 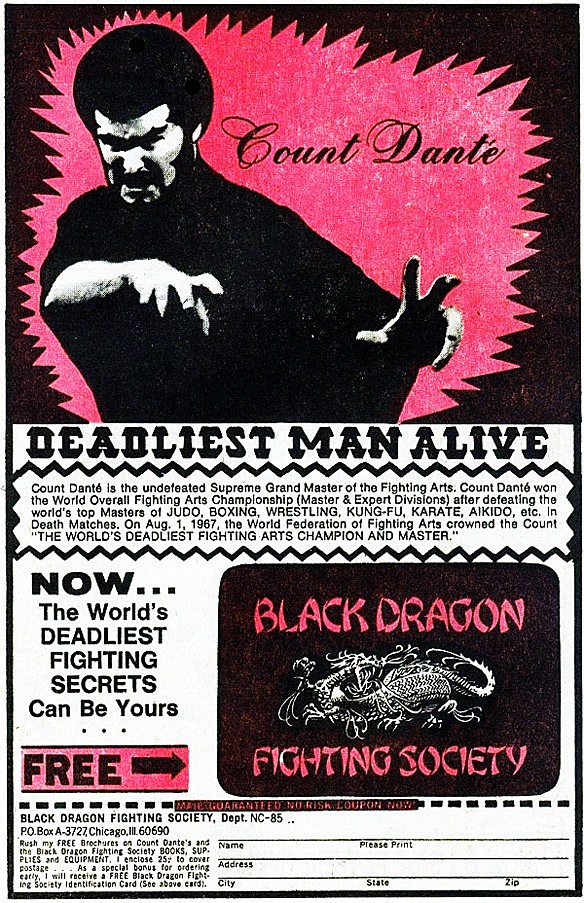 The difference is that the Count Dante's ad also crafts a narrative, but it's not about you. It's about Count Dante himself, and it's amazing.

Atlas's ad dresses up its revenge fantasy in the guise of fitness and developing a "more magnetic personality," but Dante's tells the story of "the undefeated Supreme Grand Master of the Fighting Arts," who has honed his lethal skills to fatal precision in "Death Matches." This ain't some dude on a beach kicking sand in your face, this is an arena, probably lit by torches, where one man stood under the silent gaze of whatever mysterious council of elders makes up the ruling body of the World Federation of Fighting Arts, and defeated every other deadly competitor he faced, probably killing them before they could do the same to him.

The Count Dante of this ad never gambled a stamp. He gambled with his life. And he won.

That. Is. Awesome. The first time I saw this ad, I scanned it, cropped the top half with the description of the Count's deadly art, blew it up to a 3' x 3' poster, and framed it. That's not a joke. I love it that much.

While the Atlas ad manipulates the reader into feeling humiliated, emasculated and helpless, in order to get you to buy a way to make things better, Count Dante's does nothing of the sort. There's no attempt to identify with the reader other than on any level other than an aspirational one. There could certainly be some sand-kicking bully that would motivate you to learning the Count's DEADLIEST FIGHTING SECRETS, but it isn't a necessary factor like the Atlas ad presents. The motivating factor presented in the ad is the Count himself, his accomplishments, and his knowledge. It simply is, a deadly art for its own sake.

And in that respect, believe it or not, Count Dante's offer to teach you the secret of the death touch is actually a lot more mature and sophisticated than Atlas's selfish power fantasy. In this arena, as in all others, the World's Most Perfectly Developed Man has been soundly defeated by The Deadliest Man Alive.