This week saw the release of Batman #700, a pretty huge milestone for the series (if, you know, you ignore the fact that there were also a #0 and a #1,000,000, making this the seven-hundred and second issue of "Batman"), and in celebration, I've gone through my archives of Batman stories to find 18 of my all-time favorite panels!

With 702 issues of "Batman," 800+ issues of "Detective Comics," a couple hundred "Justice League" and Outsiders and various other series to work with, I had to give myself a couple of rules:

1. They had to be actual panels from the comics, not pin-ups, covers, or other art. I could've been here all day with those, although the downside is that I don't get to show awesome stuff like Dick Sprang's "Secrets of the Batcave."

2. They had to be panels of Batman himself, which meant that this wasn't just a list of Marshall Rogers and Neal Adams' amazing shots of the Joker.

3. They had to be individual panels, not full pages.

Beyond that, I tried to keep it loose, so here they are: My 18 favorite individual panels of Batman! 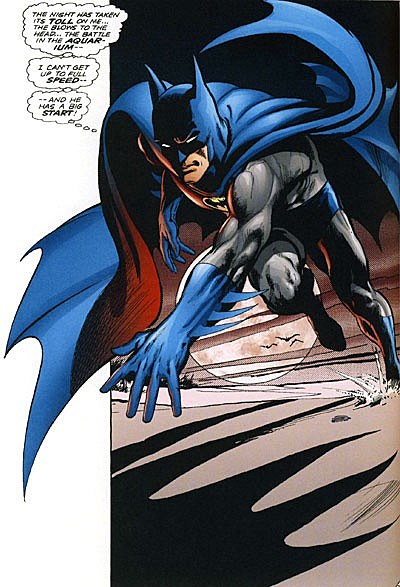 Saying that Neal Adams is one of the definitive Batman artists is underselling things quite a bit, and the image above is probably his definitive take on Batman. Which is pretty odd, when you think about it, as it's essentially just a really, really awesome version of Batman running across the beach in slow motion, making it the DC Comics equivalent of "Baywatch Nights." 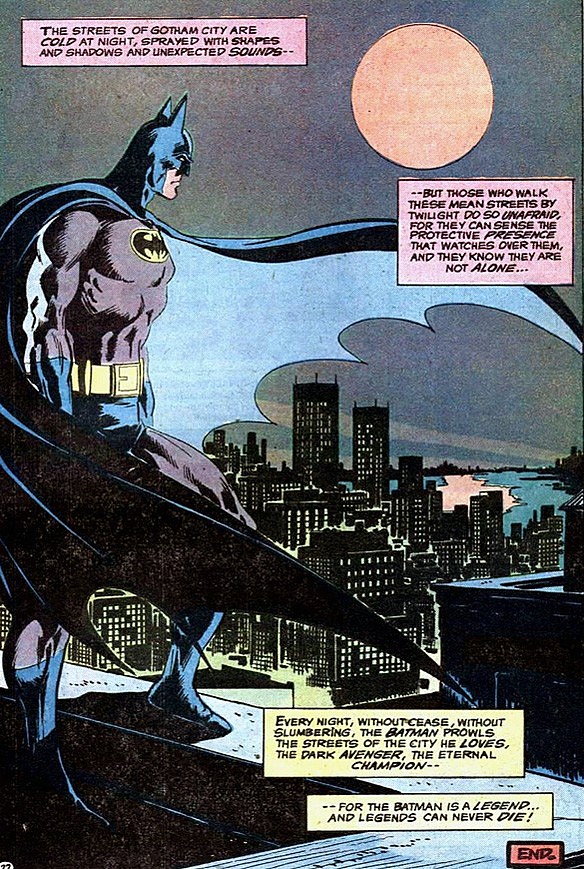 You'd think doing an iconic shot of Batman would be pretty routine for most artists -- draw up a darkened skyline, Batman standing on a ledge, bonus points if you throw in a gargoyle, make sure the cape is flapping dramatically and you're pretty much done -- and you'd be right, but very few sold it quite as well as long-time "Batman" / "Brave and the Bold" artist Jim Aparo, whose composition perfectly compliments Wein's summary of the character in a three-issue origin recap designed specifically to hook kids into a life-long love of the character.

And trust me: It worked.

This one almostbreaks the rule of standing on its own, as it requires a little more explanation than just looking at the panel itself, but it's too good to pass up: In the scene, Batman has just faced down against a trio of alien "super-heroes" who have come to earth on a mission of conquest. He's also just revealed that he knows that they're Martians, which means they have a vulnerability to fire, which is why he makes a gigantic circle of gasoline, then lights it with a match and proceeds to beat the stuff out of three people with all of Superman's powers plus they can read your mind, shapeshift and turn invisible.The bare hint of a smile Porter puts on Batman's mouth as he cracks his knuckles is the perfect representation of the super-competent always-prepared super-hero Batman.

If there's one thing I've learned from two and a half decades reading Batman comics, it's that that dude straight up loves to punch people. As you might expect, this means there are some truly fantastic chin-checks delivered over the past 70 years, but nobody -- not even Neal Adams -- makes Batman deliver an uppercut quite as solid as Alan Davis in his all-too-brief late '80s run.

That thing is just textbook perfect form: Great extension, moving forward to maximize power, and if the Scarecrow's mask hadn't been attached, I'm pretty sure Batman would've punched his head clean off.

Seriously. The dude loves to punch.

From "Batman: The Man Who Laughs"

Loves it so much, you guys.But this one actually goes a little further: The punchee in this case is the Joker, at the end of a fantastic story re-telling their first battle, where Batman is so darn mad that he wants to take his time beating the fudge out of everyone's favorite genocidal clown, but settles for a quick "Stone Cold" Steve Austin style set of mounted punches.Maybe it's just me, but that cracks me up every time. 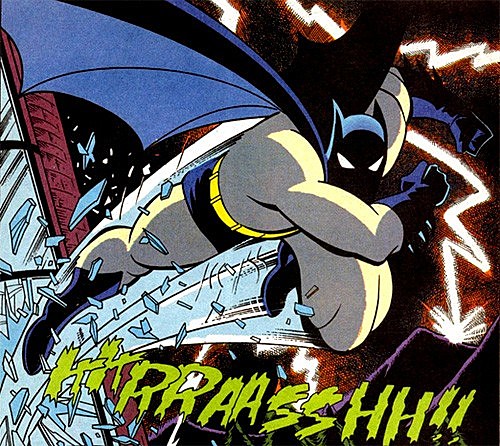 If there's one thing Batman loves as much as punching, it's crashing through windows, as evidenced by this panel where the late Mike Parobeck, a truly phenomenal artist and one of the few who was able to take the "Bruce Timm Style" of the Animated Series and make it his own with clean, fluid art that did a great job of storytelling.Plus, Parobeck knew the Golden Rule of Batman: It's never the wrong time for a dramatic lightning crash.

And thus, Batman's two greatest loves -- punching and breaking glass -- came together in one beautiful moment. The real selling point of this panel, though, is the crook on the left, who is cold freaking outabout his compadre's obviously broken nose.Also great: Batman's facial expression. This is totally just another Tuesday for him. 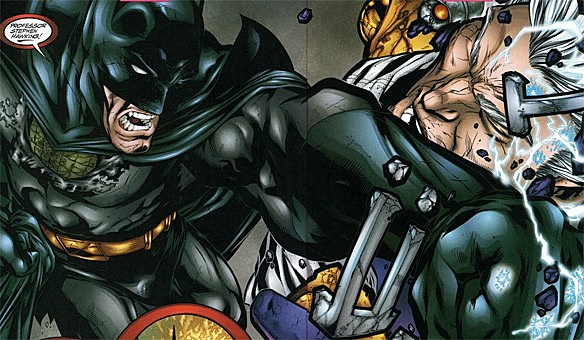 I know this section of the list is fairly punch-heavy (and why wouldn't it be?) but c'mon, this one's a classic. In case you can't make it out, Batman is saying "Professor Stephen Hawking." The reason for this is that he just reprogrammed Prometheus's brain -- which is wired through his helmet to take in the fighting styles of martial artists, a trick he used to beat Batman 20 issues previous -- to give him all the fighting skills of the brilliant but unfortunately wheelchair-bound physicist.The only thing better than that is the next set of panels, where Oracle asks "Did I see you cheating?" and Batman replies "Winning." 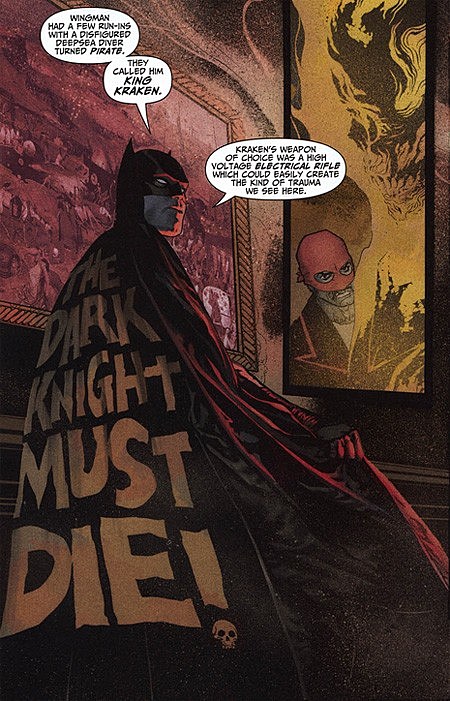 Right before he started doing some of the best art Bat-comics had ever seen with his run on the Batwoman stories with Greg Rucka, JH Williams did an incredible job illustrating "The Black Glove," a story where he not only turned in some great Batman art littered with his signature innovation in page layout and figurework, he also drew every single character in the story in the style of a different artist (you can see the Gaucho drawn as a Howard Chaykin character in the inset). The question on this arc isn't which panels are great, but which panels aren't (none of them). 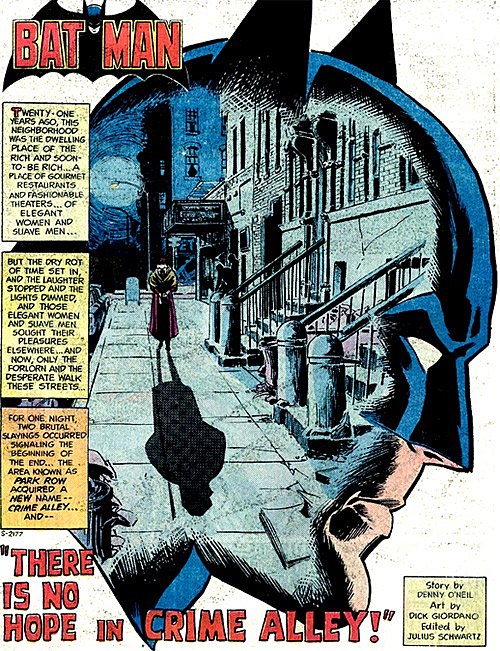 The late Dick Giordano worked on his fair share of Batman stories, both as an inker working with Neal Adams and as an editor, but his greatest work as an artist has to be the incredible splash from "There Is No Hope In Crime Alley," the story that introduced Leslie Thompkins, the kindly doctor who helped a young Bruce Wayne cope with the death of his parents."Coping" in this case being a pretty relative term, what with the whole sworn-to-haunt-the-night-in-pursuit-of-vengeance thing. 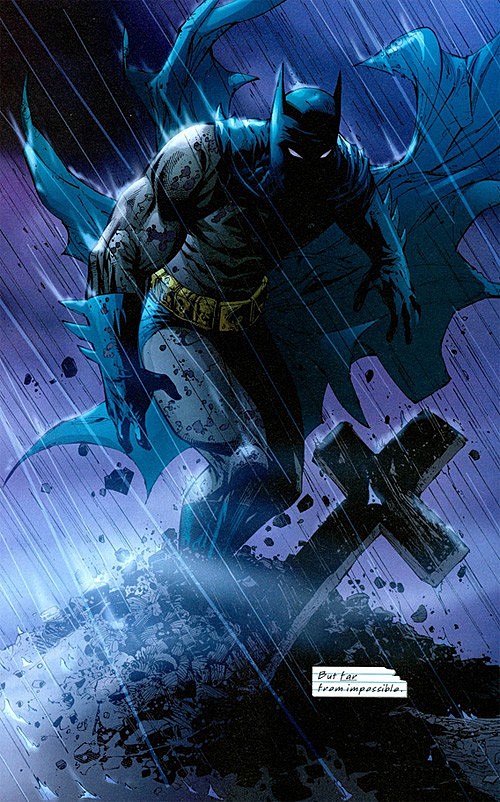 Artist Tony Daniel got his fair share of criticism during his run on "Batman," and while he did make some artistic missteps, the scene where Batman fights his way out of his own grave after being brainwashed and buried alive is not one of them. It's probably the most striking image of the entire run, and coupled with Morrison's scripting -- breaking out of a locked straitjacket and a coffin that's been buried is, for Batman, is difficult "but far from impossible" -- makes it one of my favorite pages ever. 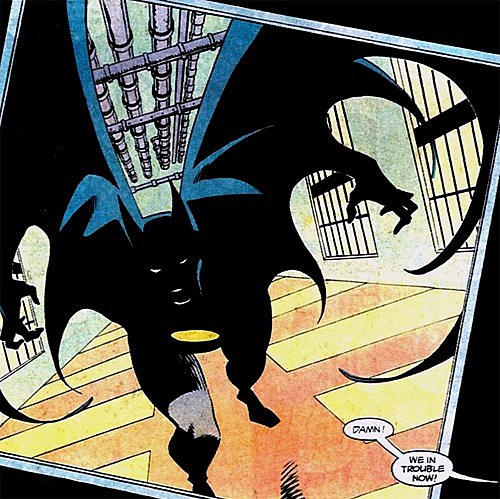 Truer words were never spoken.Actually, to be fair, Batman actually loses the following argument with Amanda Waller (though he comes back later), which ought to give you an idea of how tough Amanda Waller is. Still, Luke McDonnell's version of Batman as a prison-stalking Dracula is pretty rad. 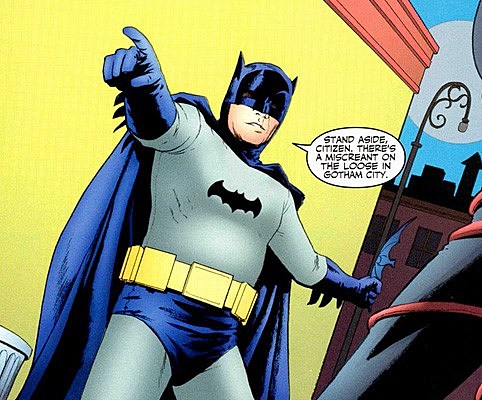 From "Planetary / Batman: Night On Earth"

Thanks to John Cassaday, "Planetary / Batman" is probably one of the best-drawn Batman comics ever, especially since the story focuses on a constantly warping reality that lets him draw Batman in the style of everyone from Frank Miller's hulking Dark Knight to Neal Adams' lean Caped Crusader to Bob Kane's original pistol-and-purple-gloves version. My personal favorite, though, is his take on the 1966 TV Batman (as played, of course, by Adam West), complete with tilted camera, pop-arrt backgrounds, and Ellis's great use of '66-style dialogue and Bat-sleeping gas. 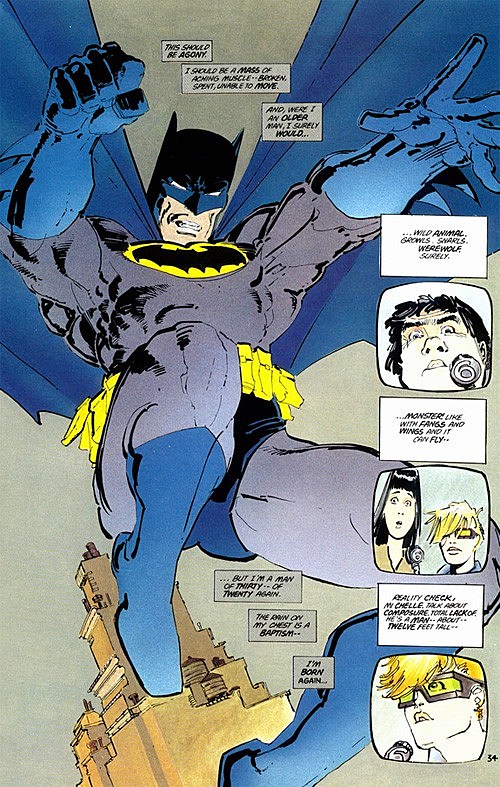 If I were honest with you guys, a list of my favorite Batman panels would probably just be scenes from "Dark Knight Returns" and "Batman: Year One," but this is far and away the one that hits me, both in terms of it being an iconic shot of Batman and in Frank Miller's scripting, which has never been better than here.

...or maybe here, the culmination of Batman "carrying two hundred and twenty pounds of sociopath to the top of Gotham Towers." Just the smile on Batman's face and the absolutely terrified look of the Mutant alone are fantastic, with the long panel and the tiny buildings just selling it so well.

For me, much like Batman, this is an image that never fails to make me smile. 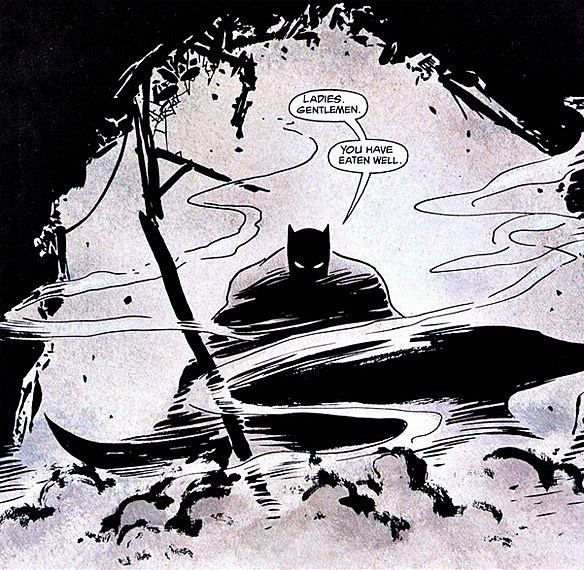 Frank Miller's work on Batman is pretty much the Alpha and Omega of the character -- he got to do the "first" and "last" Batman stories, putting everyone else in the position of filling up the middle -- and "Year One" is a masterpiece. Again, there's so much great stuff that it's hard to narrow it down, but Mazzuchchelli's version of Batman emerging through the smoke to terrify the "untouchable" criminals of Gotham's elite? It doesn't get a whole lot better than that.And finally... 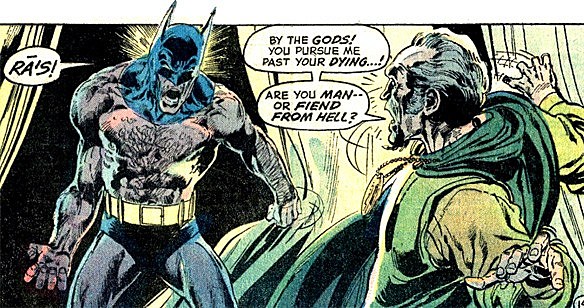 I've made no secret of my love of Shirtless Batman in the past, and if you want to know why I can't get enough of that dude, go back and read Denny O'Neil and Neal Adams' original Ra's al-Ghul stories. The panel above is the climax of the issue (well, this and the following panels where Batman lays out Ra's with one punch and then makes out with his daughter because the man is rude), and everything about it is great, from the sheer ridiculousness of Batman wearing his mask, utility belt and pants with no shirt to Ra's totally flipping out."Are you MAN or FIEND FROM HELL?!" is the perfect summation of the effect Batman is meant to have on criminals, and the fact that he's making a claw with one hand while shouting in true Slayeresque metal face fashion just sells the whole thing so well. It's fantastic.So those are my picks! But like I said, there's a lot of Batman out there, and I'm sure you all have your own, so why not let us know?