If you go out to buy a digital comic, particularly from the Big Two, right now, odds are good that you are going to purchase the digital equivalent of a monthly comic book -- between 20 and 32 pages of story costing between $0.99 and $3.99 -- despite the fact that digital comics have no set format and can be any size. Digital comics are imitating print comics in length, cost and format, but since form follows function, and it's reasonable to think that if digital comics are going to pull in new readers, they may have to move away from the old paradigm into new realms. So let's rethink digital comics, specifically within the context of the Big Two and their massive libraries. 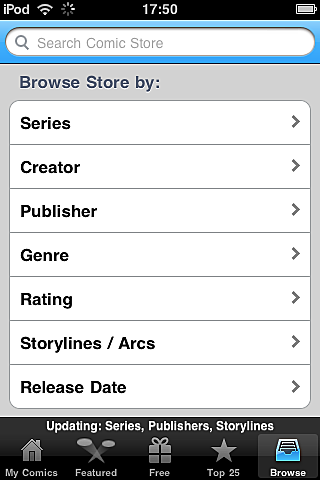 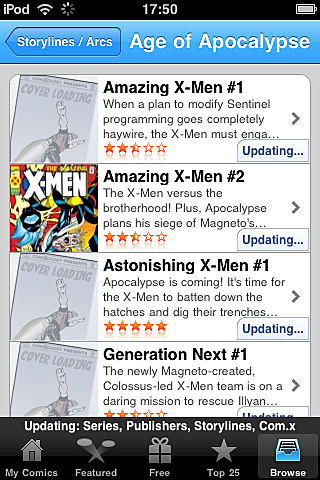 Digital comics from Marvel and DC, as they stand right now, are aimed at the hardcore collector -- the segment of the audience that is already intimately familiar with comic books. We know issue numbers, we understand that sometimes art will change in the middle of a story, and we're cool with inter-title crossovers. Single issues are what we think of when someone says, "Comic books!" and we know how to navigate event comics. We're used to getting a story in 22 page chunks, rather than all at once, and while we complain about it, we're also okay with getting unsatisfying chunks of that story every once and a while.

On the flip side, if I told my mom that she might like Blackest Night and to buy it for her iPad, she would have to do some digging to find what she needs to read. She would look up "Blackest Night" on ComiXology and find Blackest Night #1. At the top of the summary for this comic is this phrase: "BLACKEST NIGHT EVENT part 06 of 79!" She's already missing five issues of this series, and not only that, but it isn't a series at all: it's a collection of series. There's no indication of where to find parts 1-5 (the related issues are the comics of the event listed in alphabetical, but not numerical, order), nor what they would even be called.

Do you see how counter-intuitive this is? Purchasing comics should be the easiest thing in the world. I know and like comics, and even I think that 79 separate downloads of Blackest Night is a bit much. I also know to look up a checklist or a Wikipedia page, but that's already too much work for a casual reader. A good faith search should bring up what you're looking for, but it won't in this case. It will just lead to confusion. This is absolutely silly. Don't you want new people to dig into your back catalog? If I had to fight through eight screens to get Angry Birds working on my phone, I wouldn't be playing it. 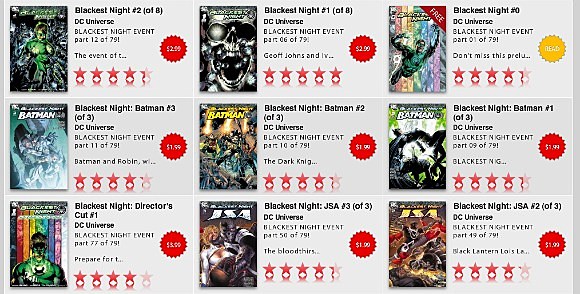 Single issues, as a way to deliver stories of a certain age or prestige, are a stumbling block for digital comics. It's a paradigm that we as comic book fans are used to, but it's not one that's particularly intuitive. When I'm loaning out comics, I don't hand out single issues. I hand out books. Other people haven't built up the tolerance I have for floppies, and to be honest, there's no reason for them to do that. Trade paperbacks exist, and a large segment of the comics reading audience, both potential and actual, is open to the idea of trade paperbacks.

Trade paperbacks of ongoing series are usually helpfully numbered, sometimes according to the run at hand, or sometimes from the beginning. Currently, you can look up storylines or arcs of single issues on ComiXology, and that's about as close as Marvel and DC get to offering trade paperbacks online. But this isn't the default method of browsing, and the arcs aren't even linked off the main menu of the app. They're hidden off in the Browse menu, and once you access the storyline you want, you have to select the single issues within that story. The default method shows you single issues.

Why not switch the paradigm? Push collections of stories, rather than installments. Some people would like to keep up with a comic as it comes out, and there's nothing wrong with that. But, off the top of your head, do you know anyone who doesn't regularly read comics that would buy Batman #404 alone? Okay, now do you know people who would buy Batman: Year One? Yes, right? #404 is just the first chapter of Year One. The only difference is that one is an issue, while the other is a full story. 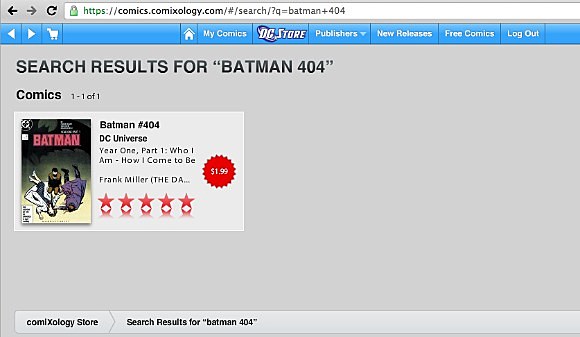 If I'm recommending comics to people, or if someone is searching for a comic, they aren't looking for issues. They're looking for a cool story. No one left The Dark Knight movie and said, "Boy, I sure do want to read The Dark Knight Returns #3!" (Or at least, no one who didn't already own that issue.) They left the theater and said, "Hm, I wonder if there are any good Batman comics for me to read?" They want stories, not issues, and digital comics are in the perfect place to fill that need, and publishers should offer comics in collections as discrete units.

The vast majority of newborn comics fans are going to enter the industry by way of DC or Marvel. They have the biggest superhero properties; their movies make scads of money, and their products still dominate comics. The Big Two also have a nice library of classic stories. These stories may have literary value or historical significance, and are often great for new readers. You know the role call: Sandman, Scalped, Y the Last Man, Fables, Daredevil: Man Without Fear, Daredevil: Born Again, Batman: The Dark Knight Returns, Batman: Year One, Elektra Assassin, and Watchmen are just a selection. They have what people want, and thanks to digital distribution, none of these classics need ever slip out of print.

Books, meaning trade paperbacks, should be the primary format for digital comics. Issues don't have to go away, but they are less and less relevant in a world where they're a mere taste of a story, rather than a full experience in and of themselves. Sliding them to the rear guard, rather than leading the charge, would put complete stories at the forefront of digital comics, rather than individual chapters. 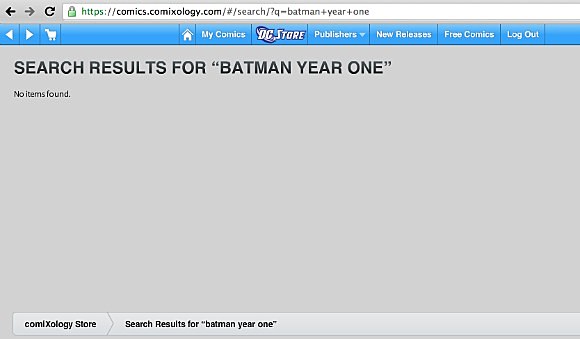 What's nice about this is that regular comics readers also like complete stories, too, so you serve multiple audiences at once, without making any segment of your target market spend time confused. Theatergoers playing on their iPhone after catching Captain America at the theater this summer can search for "Captain America" and come up with Captain America: Man Out of Time, Captain America: The Winter Soldier, or Captain America: The Death of Captain America. A few quick clicks later and they have something to read. Leaving these split up into issues is annoying, and run counter to what digital comics represent.

On top of that, a digital comic is extremely malleable. An incredibly important question when considering format is who your target audience is, as different audiences have different desires, and you can customize digital comics for your different audiences and platforms. The comic book shop or Direct Market audience, the ones who make up the vast bulk of comics sales, are used to periodical issues. Thin, floppy comics that are part of a larger story is the norm. I'm part of the Direct Market audience, or at least open to its vagaries. Another audience, an audience that includes my mother, has different needs.

You don't have to just have digital comics that are composed of nine-panel grids, like traditional print comics. You can adapt them to a strip format, a series of horizontal panels, or cape comics storytelling. You can utilize limited animation to make characters move or integrate lettering into the action. You can even include bonus content, like variant covers, sketches, or pre-production art. Considering that you aren't likely to actually own your digital comics any time soon, these extras would provide extra incentive for readers. You don't get to own them, but you do get a lot of bonus material.

As a comparison to another medium, you may have a friend who likes to go to iTunes to buy albums. She wants it to be as easy as possible because all she wants is the music. You may have another friend who likes albums, but also enjoys mixtapes and bootlegs, and she's willing to fix busted ID3 tags, seek out Mediafire links, and track down bonus tracks. Your third friend, though, is hardcore. He likes having the album, all of the bonus tracks, and he likes them in FLAC format, but would prefer them to be on vinyl. He rates his music, has custom playlists, and takes his music very seriously. All of these people start in the same place (iTunes), but their needs are different.

Of course, we're talking mainly about classic or prestigious comic book stories here, ones that get mentioned time and time again as tales worth giving to your friends or family to get them into comics. What about the lifeblood of the comics industry? What about the new stories? As Warren Ellis pointed out in a recent blog post, the paradigm for delivering new stories should probably be rethought, as well.

He loosely suggests a couple of different styles of delivering new digital stories, either ten to eleven pages every two weeks for 99 cents or possibly even eight pages a week for a little less. I'm inclined to agree with him. Regularity is a big part of building an audience, and, presuming that the craft is present, it should be simple to get an interested audience coming back once a week for their quick hit of stories. It's easy to justify spending that money when you know that you can hop off the train as soon as you get bored, and all that boredom cost you was slightly less than the cost of a king-size Snickers bar.

I would even go one step further and suggest package deals for these serialized digital comics. If you could, say, pay twenty bucks ahead of time, then you could receive three to five free weeks of stories. A fifteen or twenty percent discount, in other words, in exchange for guaranteed payment.

Digital comics are something new. They aren't print, and there are precious few good reasons why they should be approached in the same way. A new marketplace means new rules, and old methods will only take you so far.