This has already been a crazy year for comics news, what with Before Watchmen and a number of issues regarding how the industry treats its creators. Digital comics, however, has mostly been business as usual... until now. Graphicly, one of the top digital comics distributors, announced to ComicsAlliance that they are changing their business plan. As of this week, they're moving away from selling digital comics in the Graphicly app in order to focus on their Digital Distribution Platform, which puts comics -- and other media -- onto the iBookstore, Kindle store, Nook store, Facebook, and more. This is a big move with several different repercussions. Read more for an interview with Graphicly CEO and founder Micah Baldwin and a few quick thoughts. 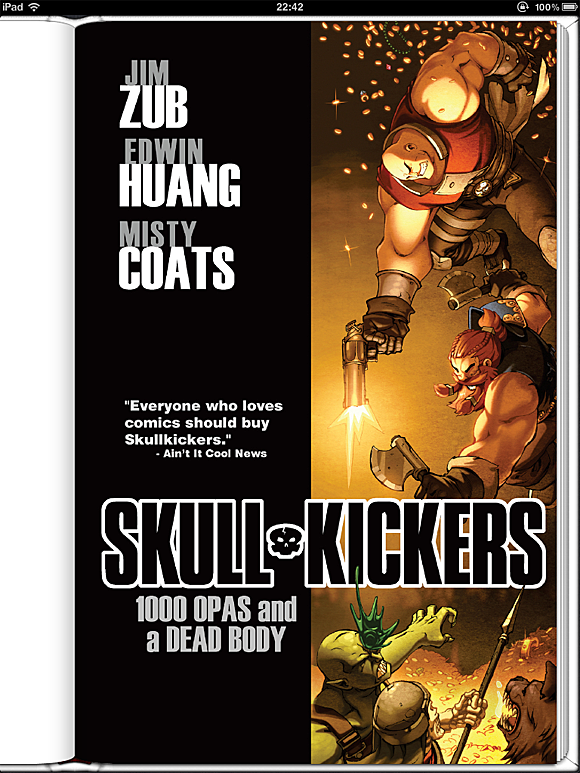 Here's eight things that you need to know about the announcement:

1. Graphicly is going to stop selling digital comics and remove the Graphicly app from the iTunes and Android stores.

2. If you've purchased comics from Graphicly, you will always be able to re-download those comics, as long as you keep the Graphicly app on your device or visit the website.

3. The Graphicly apps will not be available for reinstallation.

4. Your books will not be converted to the new format.

5. What books are available on the various bookstores will be up to the publisher, not Graphicly.

6. Soon, you'll be able to access your already purchased library via HTML5 on tablets and phones.

7. The books will be available on the iBookstore, Kindle, Nook, Facebook, and more.

8. As such, Graphicly has moved from being a digital comics distributor to an ebooks distributor. They will format and push the books to the various ebookstores instead of providing an app and specifically Graphicly experience.

This is a pretty huge change, and Graphicly is the first digital comics distributor to shift their business model like this. Rather than providing a Graphicly reading experience, the comics they publish will be native to the device they're being read on. Graphic novels purchased from the Kindle store will display using the standard Kindle Fire reader, and the same holds true for iPad and Nook. This makes for a more natural reading experience, as it will be tailored to each device.

The new focus, according to Graphicly, is to enable publishers to sell books in digital bookstores, and connect with their customers in a more direct manner, rather than selling books inside their own app. You don't have to search for Graphicly and then a comic; instead, you just search for that comic in the bookstore and it shows up. It removes a layer of difficulty from the process of purchasing digital comics.

This is a situation that we all knew was coming. At some point, some digital comics distributor was going to go under, or stop working, or disappear. Graphicly's doing none of those things, but not being able to buy new comics from them is still a big deal. I'm glad to see that they're maintaining legacy support. Short of releasing the comics as DRM-free files, something I doubt any of their licensors would be down with, this is the best way to keep people happy after the change. You'll always have access to your comics, but you won't be able to get new ones. This isn't the nightmare scenario that it could be, and I'm glad to see Graphicly doing their best to keep everything above board and consumer-friendly, even as they make such a huge change in the way they do business.

I had a few troublesome thoughts when I heard the announcement, so I immediately threw some questions their way. Below is an interview with Graphicly founder and CEO Micah Baldwin. It should answer some of the remaining questions about this changeover. You can also visit their blog post here, or view further details on becoming a publisher here. The images in this post are taken from the iBooks version of Skullkickers volume 1, created by Jim Zub, Edwin Huang, Chris Stevens, and Misty Coats. The images have been resized for the purposes of this post, and do not represent what the comic will look like on your device. (It looks very nice on iPad, however.)

ComicsAlliance: As near as I can tell, all the books you've put on the iBooks store are graphic novels instead of traditional comics periodicals. Is that a coincidence, or are you truly out of the periodicals game, at least in terms of floppies versus trades? On a related note, is this the end of Graphicly View?

Micah Baldwin: We have put many types of books on iBooks, from graphic novels to children's books to art books, and others. Our initial test was with The Walking Dead volumes 1 - 15, and given their ability to sell well, [that] makes it appear that graphic novels are all that we are doing. That's not the case, of the more than 2,100 books we have had run through the system, many of them are singles. Graphicly View will continue to exist on the marketplaces, such as Facebook, that support it. For the marketplaces that have their own directed reading experience, we will automatically convert books into that.

CA: Why did you choose to discontinue your digital comics sales service, as opposed to leaving it open for new sales but ceasing updates?

MB: We didn't want to do anything halfway, and we realized that focusing on marketplace apps was pulling us away from our core value of supporting publishers and creators ability to be in every marketplace imaginable. Also, it makes no sense to have a marketplace within a marketplace. Books belong in the bookstore, not in some random app. And the success of the publishers who are using our platform attest to that reality. 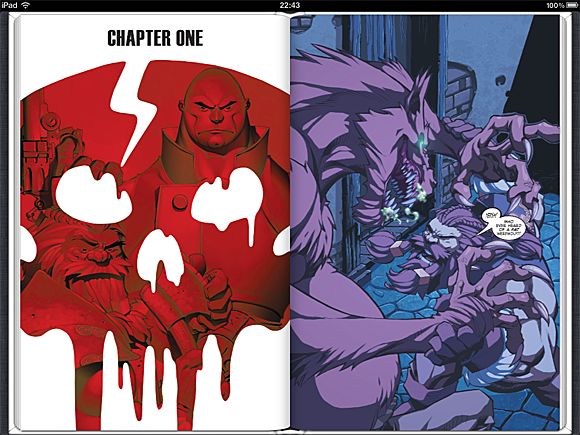 CA: Will the entire Graphicly library be ported over to iBooks and the other platforms, or just specific books?

MB: Some books will be ported, some will not. It's really up to the publisher.

CA: How long has this move been in the works? I know that Graphicly first announced that it was getting into the ebooks business in January, but does changing your model to this extent date back even farther than that?

MB: Probably September/October of last year. We spent some time together talking about the business, and it was clear that we weren't doing what we wanted to do for publishers. We were making decisions based solely on sales, rather than surfacing great stories, and we felt a bit of our souls sucking out. We realized that we didn't want to be a random app pitching the latest Spider-Man or Superman book. We wanted to surface stories like Luther Strode and Planetoid because they deserved it.

CA: How little guy-friendly is the new Graphicly going to be? Comics has a strong segment of independent and self-published books. Will indie creators that aren't tied to a major publisher be able to get books on the iBookstore?

MB: That is the primary point. Anyone can use the platform now. It's self-service. We have had Russian books through the system. An artist from Brazil has used it it present his portfolio. It's really quite amazing how creative people are, and frankly, how lucky we are to be able to see stories we would have missed.

CA: What's going to happen to the comics that consumers have already purchased through Graphicly, and the Graphicly app? Is it being deprecated in favor of this new initiative?

CA: Will every book that shows up on iBooks also appear on the other ebook services? Are there any exclusivity windows we should worry about?

MB: It really depends on the publisher. They have the full ability to turn on or turn off any book in any market. Im sure there will be marketing and promotional arrangements that will drive exclusivity, but that's between the publisher and the marketplace.

CA: Graphicly's using this new initiative to branch out beyond comics. Is it too soon to say what else you have on deck? What's coming up soon?

MB: The platform was built to support the more than 1 billion image-based books sold each year. Whether it's a cookbook, a yearbook, a children's book, an art book, a magazine, a picture book... well, you get the idea. Right now, nearly 40% of all books being put through the platform are non-comic books. 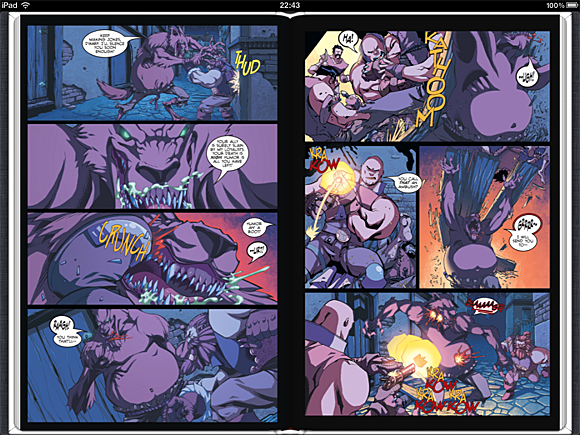 CA: Will Graphicly be generating and publishing new and original content, or is this digital distribution position the preferred position of the company?

MB: We are focused on helping publishers convert their content, distribute it to every marketplace imaginable, and learning through actionable insights on how to build a stronger fan base and sell more. I don't think we will develop any original content in the near future.

CA: How do you plan to capture the attention of people now that Graphicly is pushing comics into the wide world of ebookstores, instead of being a destination of its own?

MB: Well, one thing we will do is talk to smart journalists... :) Beyond standard marketing, we are spending a lot of time with publishers and creators showing off the platform. In many ways, the platform does the marketing for us, as the first 1,000 publishers have come almost completely via word of mouth. In addition, Apple, Amazon and others are suggesting that folks check us out, which certainly doesn't hurt.

CA: Where do you see the digital comics industry going from here? Do you think that periodical digital comics are a viable way to do business, or was this move designed to help Graphicly carve out its own niche?

MB: Truthfully, I see the digital comics world continuing to grow and maturing past the "random app stage." The large players -- Amazon, Barnes and Noble, and Apple -- all see digital comics as a way to showcase the power of their devices, and as such are working directly with many publishers to do just that, by creating interesting ways to discover those books where they belong: in the bookstore.

The great thing about what we build is that we are agnostic to the endpoint. Meaning, we would love to help publishers get their content in every marketplace imaginable, including places like iVerse and Comixology (we have reached out to both to see if they are open to the partnership), and the hundreds of other ebook marketplaces on the planet. We have agreements with marketplaces in the Far East that we have started to funnel books to as well.

Books sell more than 2.5 [billion] units per year, and do close to $23 [billion] in sales. Comics does a small portion of that. We are a much larger player in a much larger space with a few big slow incumbents. With more than two hundred million tablets and smart phones in the world, all with native ereaders, we are helping publishers bring their stories to the widest possible audience in a way that no single app could.

Which, at the end of the day, is our mission. To help great stories get seen. This is just the logical next step in that quest.