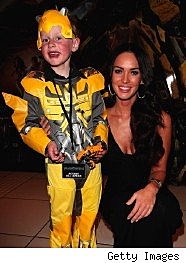 "Transformers 2" siren Megan Fox is in the midst of a war of words with the man who helped launch her to fame, "Transformers" director Michael Bay. The feud began when Fox stated the obvious in an interview with Entertainment Weekly, saying that "Transformers 2" was "not a movie about acting."

Bay fired back that she "needs to grow up" and owes him her career, and she responded by revealing that she was forced to wash his Ferrari while he filmed her and model 18 skimpy outfits for him in order to earn her "Transformers" role.

Now Fox has added more fuel to the fire by suggesting that he was "a tyrant on set" and that he exploited her early on in her career:

"The first time I ever met him, I was 15, and I was an extra on Bad Boys 2. We were shooting this club scene, and they brought me in, and I was wearing a stars and stripes bikini and a red cowboy hat, and six-inch heels, and they took me to Mike and he approved it. And they said, 'You know, Michael, she's 15, so you can't sit her at the bar and she can't have a drink in her hand.' So his solution to that problem was to then have me dancing underneath a waterfall getting soaking wet. At 15. I was in tenth grade. So that's sort of a microcosm of how Bay's mind works."

While Bay's treatment of attractive minors is unseemly -- if unsurprising -- it does strike me as a little funny that Fox was totally cool with dancing around in a stars and stripes bikini and a red cowboy hat, but Bay making her splash around in a waterfall -- whoa, whoa, that's just over the line.