Q: If you can explain how the Pokémon world works without making it sound like a bizarre dystopia, I would be very grateful. -- @HydrogenGuy

A: Oh, this is an easy one. See, Pokémon takes place in a world where young children are sent out to catch animals and make them fight each other while being constantly in danger of being murdered by crimin -- wait. Did you say you wanted me to not make it sound like a dystopia?

Okay, that's gonna be a little more difficult.The thing about Pokémon is that there are a million fan theories about how that world actually works, and each one tends to be more depressing and chock full of Lovecraftian horror than the last, and a lot of that is because those games are weird as hell. For reasons beyond the obvious ones about all the children with pets that can shoot lightning and poison out of their faces, I mean. There's the one about how the game takes place after an apocalyptic nuclear war and all the Pokémon are mutated animals -- although how that explains a sentient ice cream cone is beyond me -- or the various explanations for why your character is always the child of a single mother, ranging from a recent war with heavy casualties to Red Sr. just cold stepping out for a pack of cigarettes and a Super Potion and never coming back. For our purposes, though, I'm just going to stick with what's in the games, and maybe the anime.

Obviously, the major difference between the world of Pokémon and our regular old Bulbasaur-free Earth -- other than the fact that it's largely populated by Boys, Girls and Professors -- is that there are a bunch of weird-ass monsters who can hide in tall grass despite being ten feet tall and literally on fire. This is, in fact, the core premise of the entire franchise, and it raises so many questions that I don't even know where to start.

For starters, there's the raging debate over whether or not the Pocket Monsters are the only animals in the entire world. They're the only ones you see (and are also the only thing anyone talks about, ever) but at the same time, they're described in terms of other animals, and the anime occasionally shows stuff like regular fish swimming around in an aquarium. If they aren't the only animals, then it raises the question of just what it is that sets Pokémon apart from everything else. Like, can I battle against your Rattata with a cat? If I fight Team Rocket with a beagle, is it eventually going to turn into a German Shepherd? And if they are the only animals, then what exactly is everyone eating?

Seriously: Pokémon are at least somewhat sentient (Meowth can f**king talk and owns a hot air balloon shaped like his own head, and if there are two more definitive qualities for determining a sapient being, I'd like to hear 'em) but at the same time, it's hard to tell where the line is drawn. There is a Pokémon called Miltank, for instance, that is raised as a dairy cow, to the point where you can buy its (extremely nutritious) milk from farmers for your other Pokémon to drink. Are we to assume that there are also Miltanks out there that get bashed in the head and ground up into hamburgers? It's worth noting that there's one Pokémon, Farfetch'd, whose official description refers to it being delicious in soup, and that carries its own side dish, so it's at least somewhat canon that this totally happens. You could make the argument that everyone in Pokémon is a vegetarian, but even that doesn't really matter in a world where vegetables occasionally get up, wander around and start smacking things around with Vine Whip. That turnip might have aspirations, man. 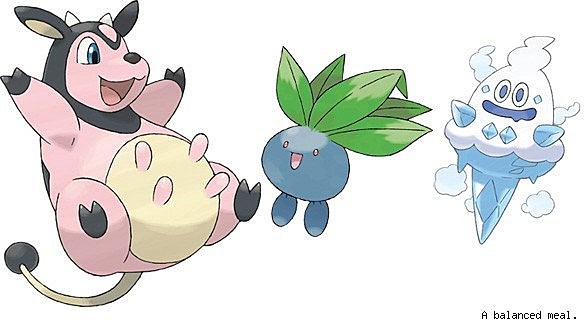 Of all the weird quirks of the Pokémon world, that's the one that I think has the firmest roots in sheer eldritch terror. There are Pokémon that are trees, Pokémon that are rocks, Pokémon that are insects, candles, lamps, piles of garbage, household appliances, giant germs that divide and replicate while floating in mid-air -- and every few years, a couple hundred more are discovered that were maybe always there but we just never knew about. Literally anything around you could be alive, sitting unnoticed in plain sight, and always, always watching.

Oh, and there's also one that's a mime that will come live with your mom while you're not home. 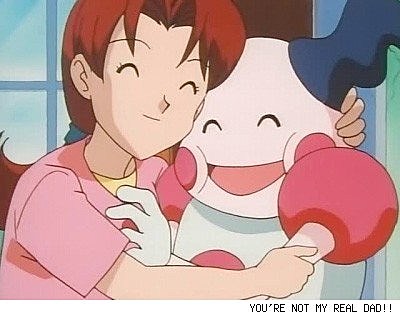 Huh. I guess I kinda drifted back into dystopia there, huh? Okay, let's forget about the Pokémon themselves! There's plenty of other stuff going on in the world that's not existentially terrifying! Right? There's gotta be...

Oh, okay, how about this? The technology of the Pokémon world is actually pretty interesting. Again, it's mostly the same stuff that we have -- cars, trains, boats, TVs, the Nintendo™ Wii™ -- but there are also things that go far beyond what we've got and into some crazy futuristic sci-fi stuff. There's widely (and freely) available teleportation, the ability to store living creatures in a computer system, instantaneous healing, medicine that can heal poison, burns or paralysis just by being sprayed on the skin, and so on. Even the Pokéball, the single most widely used piece of technology in the games, converts a living creature into something that can be carried around in a pocket. That's pretty impressive technology, whether it's the anime's depiction of some kind of conversion into energy that's stored in the Pokéball, or the manga's version, where they're literally shrunk down to fit: 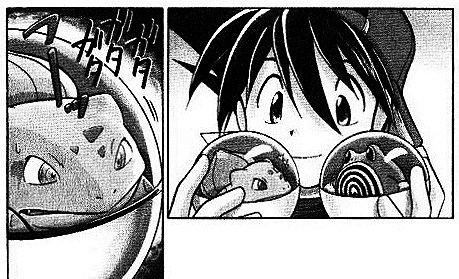 Point being, all of these phenomenal bits of technology are built entirely around Pokémon: Moving them around, keeping them healthy, keeping them organized so that it's easy to get access to the ones you need for a particular task. And it makes sense that they would be -- the very existence of Pokémon has shaped that world so that society is largely based around what they can do. Those games are full of talk about how people work with their "Pokémon partners" to accomplish things, and at the very least, having what essentially amounts to a bunch of walking electromagnets and blowtorches probably made industry a hell of a lot easier to develop. If you're in a world where Pikachu exists, then you don't really need to figure out how to generate electricity. You just need to figure out how to work with Pokémon.

And that brings us to the idea of trainers.

This is one of the weirdest bits for a lot of people, in that the games are about kids who go out on a journey of self discovery and/or fighting for money at the age of ten, completely free of adult supervision and any sort of formal education. It's kind of like the Hogwarts problem, where Harry Potter and his pals go to learn about magic and unicorns and flying broomsticks, but never take any classes that address, say, math or reading. Think about it: Hermione Granger, the smartest person we see in those books, has a fifth grade education. I'm like 90% sure that she has never heard of Shakespeare or algebra, and would probably consider a semicolon to be some kind of dark magic. But, you know, it's also a book for kids, and nobody wants to read about Harry learning long division -- and if they do, they can go write fanfic about it, featuring all the longing sighs that Harry and Draco exchange over the numbers that are being split apart, only to keep them together. Harry Potter and the Remainder of Secrets.

Same goes for Pokémon. It's a game for ten year-olds, so it's about ten year-olds and their adorable pet monsters. But, if you really want to hammer it to fit some kind of logic, it's pretty easy. Consider the amount of technology that exists in that world, and how it's all built around putting Pokémon to good use. Working with Pokémon is a day-to-day necessity in that society, but you can't really teach someone how to cooperate with others, or apply their knowledge in practical situations, or to be nice to pets. These are things you have to learn by doing.

As for the rest of the education, there's a way to explain that, too. We know from the games that people have Training Machines, which are basically CD-ROMs with fighting techniques on them that instantly grant knowledge to a Pokémon, but who's to say that they're just for Pokémon? Why can't there just be a T.M. marked "Long Division" that you pop in so you can learn that jazz Matrix style? Five years of that, and your book-learning is more or less complete, and it's time to get out there and figure out how to apply that knowledge. Once you've got some experiences and know a little about how the world works, you can go back to studying -- and if you're named after a tree, you might even become a Professor and spend your days unsuccessfully trying to determine someone's gender without resorting to a blunt, somewhat awkward direct question about it.

Of course, this would imply that kids in the world of Pokémon are better educated as a general rule than we are, which is undermined more than a little bit by the fact that Ash Ketchum is dumber than a sack of hammers. Still, I think that makes sense too -- if you were Ash's mom, you'd be counting down the days to when you could shove that kid right out the front door, too.

All of this brings us back around to the idea of Battling, and again, this is a major sticking point for people who like to make the hilarious and not-at-all ancient observation that Pokémon is basically just a kid-friendly version of cockfighting. But, unsurprisingly, I don't think they're really looking at it the right way.

Pokémon battles aren't the only way for a Pokémon to get stronger, they're just mentioned as the fastest way, and even then, don't really tend to be violent, life-and-death struggles. Instead, I think of it more like studying martial arts. It's not fighting so much as it's full-contact sparring, which again goes under that heading of learning-by-doing. It's practicing new moves, sparring, that sort of thing. It's based around fighting, yes, but as anyone who studies martial arts knows, they're about more than throwing a punch. There's a discipline involved. And along those same lines, there are the guys who just learn Pokémon battling and/or karate so that they can bully people around, and they're the bad guys that you occasionally have to have the "real" fights against. It all works, assuming that you're willing to adjust the logic of it for the standards of a video game about sentient trees fighting whatever the hell Diglett is.

So in that respect, it's pretty far from the dystopia that it looks like at first glance. Instead, there's a story of people learning to respect a natural resource, trying to understand how to best interact with the world around them, and learning discipline and focus through practice. It makes a certain kind of sense, although it's definitely not without its quirks.

You know, like how a ten year old can wander around and end up catching the actual, literal creator of the universe. That part... that part's a little weird.