Q: With which character is there the greatest gulf between the quality of the hero and that of their villains? -- @JammyNorman

A: After last week's column about the Riddler, I've gotten a lot of questions about villains, but none had the precise grammar of this one. Plus, it's a pretty interesting subject. I mean, Batman and Spider-Man both have a lot of truly awful villains, but there are so many great ones -- and pretty good B-listers -- that they end up with a pretty solid average. But when you get right down to it, they're the lucky ones.

And the best hero with the worst villains? There's no question: It's Superman.Despite the impression you might have if you've read the reviews of Smallville and the Superman films that I've written with David Uzumeri, I actually do really like Superman. He's one of those perfect concepts that has -- with a few notable exceptions -- been refined over the years into something that's truly great and inspiring. There's a beauty to the concept at the core of his character that's undeniably appealing, and there's a reason he was the template for the super-hero that's going to outlive us all just as surely as Robin Hood and Hercules and King Arthur have.

Normally, this is where I'd spend a thousand words explaining why, but fortunately for all of us, Grant Morrison already summed it up in one sentence:

"Somewhere, in our darkest night, we made up the story of a man who will never let us down."

The thing is, though, that Superman's one of the few characters that actually lives up to his the promise of his concept more often than he doesn't, at least when you look at the character as a whole. As much as a lot of readers look down on those classic adventures from the '50s and '60s for their lack of sophistication, a reliance on gimmick-based storytelling and other assorted concerns, there are more truly great stories in that era than any other time.

I don't say that out of any kind of ironic love of those stories and their tendency for goofiness, either. Anyone who makes a list of the greatest comic books ever printed and doesn't include 1962's "The Last Days of Superman," in which Superman discovers that he has 30 days to live and does his best to make the world a better place before he's gone, is just objectively wrong. 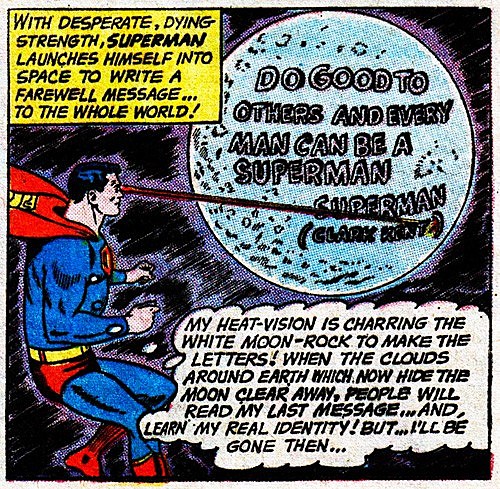 Also, on the subject of old-fashioned goofiness, that message stays there, written on the moon for the rest of the Silver Age. It is one of my favorite things about comics.

The villains, however, just don't measure up.

That's not to say that Superman's enemies are all bad. There are two or three that are really solid, but once you get past those, there's a whole lot of nothin'. But let's start with the good ones and see what we have to work with. 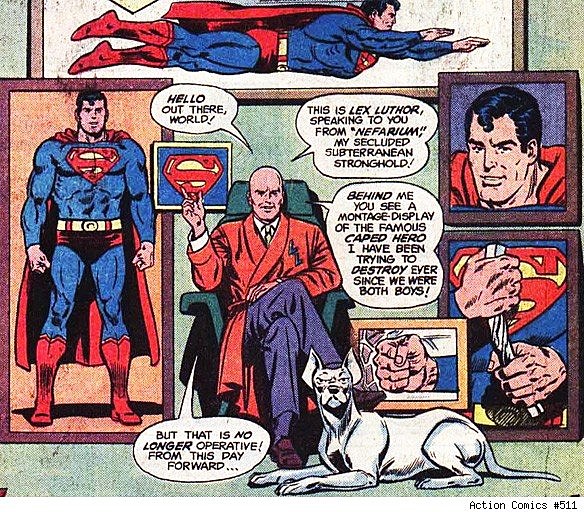 Lex Luthor is, in my mind at least, Superman's only genuinely great enemy. He's one of the best villains in comics, and not just because used to be so evil that he lived in an underground lair called "The Nefarium." In the same way that Superman was built and refined to be everything that was good about people -- as my pal Chad Bowers put it, he's the one guy in the world who has X-Ray vision but doesn't use it to check out girls -- Luthor is every awful emotion that we have personified.

He's jealous. He's petty. He's hateful for no reason, and in dedicating his life to destroying someone so altruistic shows us that hate is self-destructive. The best summary of his character is that he's a guy who could cure cancer or save the world, but he never will. He's too consumed with himself to even spare a thought to help another person.

This, incidentally, is one of the reasons that I'll always think that John Byrne's post-Crisis on Infinite Earths revamp of Lex as a businessman is such a great idea. In a world without Superman, that's exactly what someone like Lex would do. In becoming the richest and most powerful person in business, he has essentially conquered the world, in a way that's both more subtle and effective than conquering people in green and purple armor ever was.

His wealth and power make him untouchable in a way that is, as much as I dread applying this word to super-heroics, realistic. One of the many great moments of genius in Man of Steel is that the moment that kicks off their enmity, the one moment that makes Lex hate him enough to devote all of his considerable genius and fortune to Superman's utter destruction, is that Superman makes him spend one night in jail. 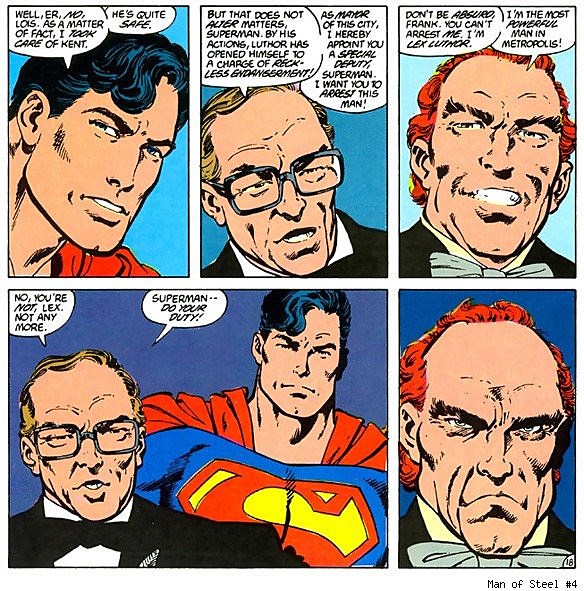 But what really makes Lex great is how, like all great villains, he provides a contrast with the hero. When you think about it, it's actually really tough to get behind Superman as a concept. He's an alien being with powers and abilities that none of us could ever even comprehend having, and if it's not done perfectly, his uncompromising morality can easily come off as preachy or false. But if you take someone who has the desire to help everyone coupled with the ability to actually do so, the qualities that we most admire in humanity, and then contrast him with a "normal" human being with a complete lack of empathy, someone wholly consumed by hate, it says something.

That's why Luthor's the perfect villain for Superman, but once you get past him, you start to run out of options pretty quick. Brainiac is a solid choice with a lot of great potential and some really interesting gimmicks, someone who reflects the more sinister side of alien civilization. He's completely divorced from humanity, and his desire to keep living beings as pets and experiments in their bottle cities is a beautiful way to highlight the fear that comes along from Superman's power and the constant worry that he's Not One Of Us. Bizarro is another one with potential, great to play for laughs or as a genuinely creepy threat who shows the danger of Superman's powers without his mind and morality to guide them. Mr. Mxyzptlk follows along the same lines, but with the malicious streak of a child who burns ants with a magnifying glass guiding him. Metallo is... uh... he's kind of a robot? That's pretty cool, right?

But where do you go from there? Toyman and Prankster just don't fit. They feel like third-rate knockoffs of Batman villains even though they were both created in the early '40s, well before most of the characters they seem like copies of. Terra Man isn't nearly as awesome as a time-lost cowboy trained by aliens to raise a ruckus on Earth should be. Mongul is a second-rate Thanos, who was himself a second-rate Darkseid, making him a knockoff of a knockoff. And while Darkseid is a fantastic villain, giving Superman a foe who's the literal embodiment of evil is actually a little redundant when he's already got Lex Luthor.

It actually gets worse when you hit the modern age, too. Conduit? Bloodsport? Yikes. And the worst of 'em all is Doomsday. 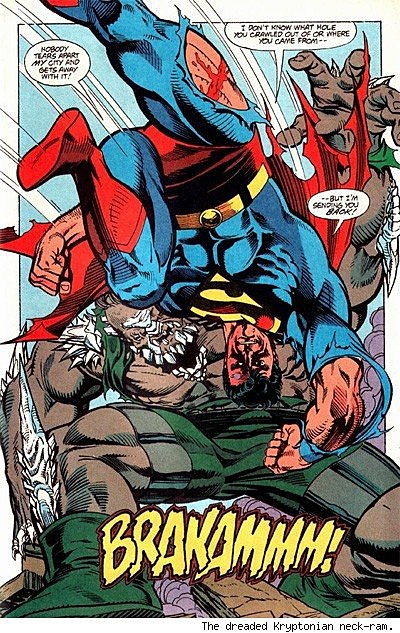 I've written before about how I actually hold Bane in pretty high regard, but his fellow poster-boy for the '90s is pretty awful. Bane is constructed to reveal something about Batman, to show his limits and the flaw in his character that results from what should be his greatest strength: his dedication to his mision.

Doomsday wears green bike shorts and punches Superman until they both die.

He also has bone claws, which I think makes him the literal embodiment of the '90s. I seriously have no idea why anyone would bother to bring him back, but I guess when you're the bad guy in one of the best-selling comics of all time, you tend to garner fans just by default.

There's also a wild inconsistency among Superman's foes, and that doesn't just result from DC's tendency to freak out and hit the reset button whenever the opportunity presents itself. There have been a handful of different takes on Brainiac over the years, and if you're a fan of General Zod, I've got good news: Between 1995 and 2010, there were five completely different versions of the character. The bad news? None of them were very good.

So the question, then, is why? Why does one of the greatest heroes of all time have such a lousy set of villains? 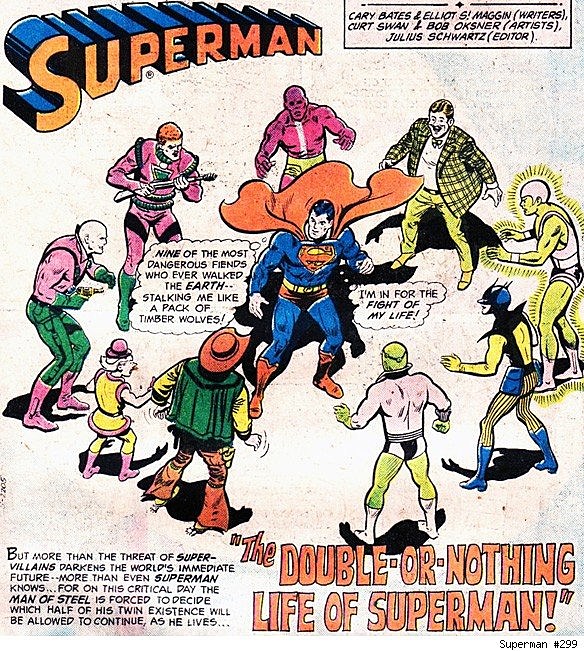 I think a lot of it has to do with the fact that Superman was forged with a very different storytelling style than other heroes. In the formative years of the '40s, all the way up through the '60s and even the '70s, Superman's stories just weren't focused on individual villains.

In creating a character that was supremely powerful, Jerry Siegel and Joe Shuster -- as well as later creators like Otto Binder, Ed Hamilton, Cary Bates, Elliot S! Maggin, and so on -- gave themselves a pretty interesting problem. When you have a character that you continue to establish as unbeatable, then trying to introduce a character that you portray as being able to beat them just doesn't work. They ring false, even in a comic where the reader is asked to believe in an alien who can fly around and shoot laser beams out of his eyes.

So with the exception of Luthor, whose own criminal genius advanced to keep pace with Superman's increasing powers, the stories never seemed all that concerned with bad guys. Rather than villains, the emphasis was on challenges, on trying to trip up the Man of Steel with convoluted plots and schemes from villains and friends alike. If you read those comics, the "villain" you'll see most often will be a bunch of nameless gangsters who manage to stumble on some Kryptonite and hatch a plan to use it, and the joy isn't seeing Superman bash them about the head and shoulders like it tends to be with Batman, it's watching Superman think his way out of it.

It certainly led to some pretty ridiculous stuff, but there was also an incredible level of creativity among those creators that makes their work a joy to read. And in the process, they showed us what it was like to have a world with Superman in it. The Superman comics of the '50s and '60s show a world that has no real villains for Superman to fight because he's pretty much won. He's fixed everything, to the point where he now has time to screw around in his Arctic bachelor pad, writing in his giant diary and playing pranks on Jimmy Olsen to teach him instructive life lessons.

You could say that it really just points to one of the great truths about Superman, which is that his real enemies aren't people, or aliens, or monsters, or anything else that can be punched out. His enemy, his only true enemy, is evil. And against evil, Superman always wins.

Then again, if you're going to say that, you could also say that Batman's only enemy is the concept of Crime, and that dude still manages to punch out a murder-clown on a monthly basis.

Q: What lessons can we all learn from Sailor Moon? -- @franzferdinand2