Q: Which of the Big Two has the best "imaginary" stories (What If, Elseworlds, Intercompany Crossover, etc.)? Which book was the most satisfying or actually made sense to occur? Which is your favorite? -- Sam, via email

A: I've always been fascinated by the idea of the "Imaginary Story," because -- in my experience at least -- it's something that's always seemed unique to super-hero comics. Maybe it's just a matter of living now instead of a thousand years ago, but you never really hear legends about Robin Hood or Hercules being divided up into the ones that count and the ones that don't, even if they both had their fair share of retcons. With comics, however, there's an entire list of completely fictional, made-up stories, and then stories that are somehow even more made up than the others.

When you get right down to it, that's pretty weird. 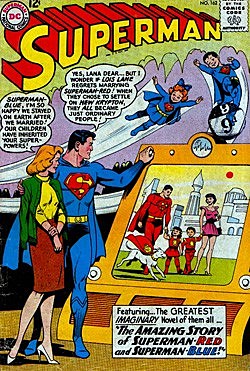 But as weird as it is, it's a pretty interesting side effect of how comics developed into being these massive, intricate universes that dozens of people are constantly developing, all at the same time. That aspect of super-heroes is what sets them apart from any other genre in any other medium, in that DC and Marvel produce multiple serialized narratives that are meant to form one coherent whole. Nothing else even comes close to doing that on that scale.

So What it really comes down to is continuity, and while that's a word that people tend to either roll their eyes at or salivate over, all it really means is that things continue logically from one piece of the whole to the next and it's a crucial part of any kind of serialized fiction. Look at Sherlock Holmes: He dies at the end of The Final Problem, so when he shows back up in The Adventure of the Empty House, there's some explaining that needs to be done to preserve the validity of the stories. Things need to make sense, at least internally, or it's impossible to genuinely care about the characters. After all, as much as you might like Daffy Duck, you're never going to really worry about him after you watch him survive a point-blank shotgun blast from Elmer Fudd. And for a character based around slapstick comedy, that's fine.

In an adventure story, however, where the hook is based on the idea there's some kind of danger for the characters or their world, we have to be able to believe the risks. We all know intellectually that there are no real consequences for fictional characters because there's nothing in there that's real to begin with, but we pretend we don't because that's what the author's telling us. The problem is that the author's constantly being cross-examined as we read, and the more cracks and contradictions show up in the story, the more we see the fiction for the elaborate lie that it really is. We're pretty much trained to do that from the moment we start interacting with other people, and it's not something you can really turn off.

Like said, it happens in any kind of serialized fiction, from novels to TV to movies, but in comics, it's being done on a much larger scale, so the lie is a lot more elaborate. And honestly, comics readers tend to be a lot more forgiving of the small stuff than they get credit for. It's when the inconsistencies are impossible to ignore that it creates a problem, like that time back in the early 2000s when Superman was fighting a completely different General Zod every year and never stopped to go "hey, it's pretty weird that these guys all have the same name."

Added into that complex continuity is the fact that super-hero comics aren't really designed to end. As I mentioned last week, they're designed to be self-perpetuating story machines, so while they're supposed to build on the stuff that came before, they're not supposed to ever build too far. There are two conflicting forces, both pushing from opposite ends to keep super-hero stories suspended in a second act that never ends. And nowhere were those forces more prevalent than in DC's Silver Age.

The goal of most Silver Age stories was ultimately to be entertaining while keeping the status quo blissfully intact. If we're honest, not a whole lot has changed on that front, but back then, it had to be done in a very compact format. You had around eight pages -- or occasionally a "Daring Three-Part Novel" that clocked in at 24 if you had something to really explore -- that had to end with things exactly the way they were when they started, minus a few crooks that had been sent off to jail. As much as I love that era and the creativity that fueled those stories, it's pretty easy to see how restrictive that could be. So naturally, they turned to the Imaginary Story to get out of them, if only for an issue at a time.

One of the interesting things about the Silver Age Imaginary Story is how often it allowed the creators to have the one thing they could never have in the main line, even with Red Kryptonite, Multiple Earths, robots, hoaxes, and the other storytelling McGuffins that they always used: Closure. So many of these things are rooted around finally bringing things to an end. The comic above, in which Superman is split into Superman-Red and Superman-Blue, ends with both Supermen getting married to Lois and Lana, respectively, and they throw in Jimmy Olsen and that hateful monster Lucy Lane for good measure: 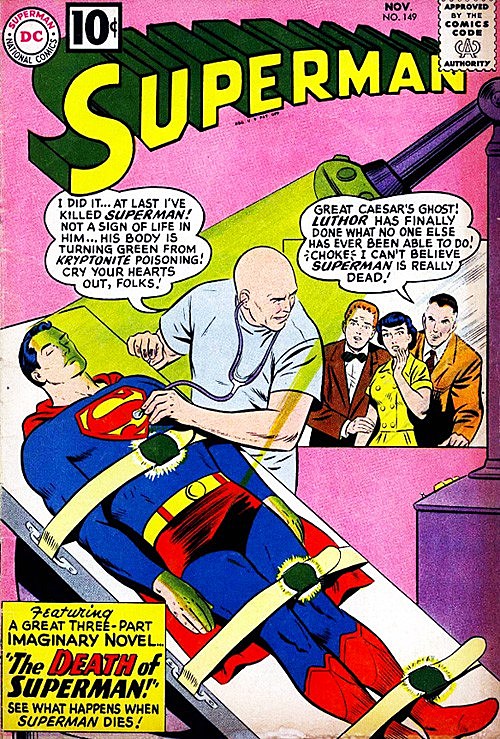 I love this comic. It's easily one of the single best issues of the era, because Jerry Siegel and Curt Swan are doing a comic that feels like it could happen, just as much as anything else that happened in the book. The only twist is that the villain wins, and even then, Supergirl shows up at the end to set things "right," before flying off to continue having adventures in memory of her cousin. If it wasn't for the blurb on the cover and the text at the beginning, it'd be easy to believe it as the story where Supergirl took over the title.

And that opening is a work of art all its own: 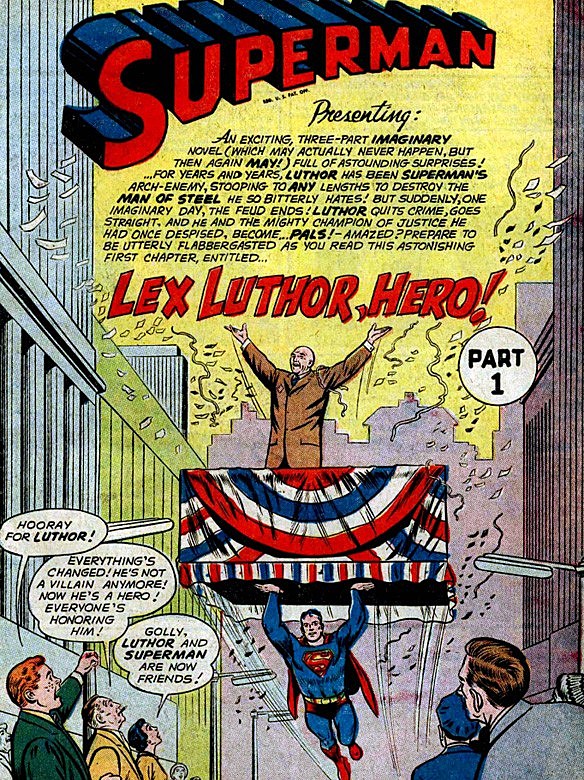 That line about how this story "may actually never happen, but then again may" is the one that Alan Moore paid tribute to in "Whatever Happened to the Man of Tomorrow," but even though that's a pretty dark story, the cheery way that Moore uses it and the addition of "but aren't they all?" makes it seem almost whimsical. Here, though? The emphasis on that last "may" makes it a threat. It's a warning that this might just be how Superman dies.

The story's great too. It's perfect in that Superman's downfall comes directly from his willingness to believe that the most evil person in the world can change, and it's Luthor at his brutal best. It revolves around one of those beautifully grandiose plans in which "cure cancer" is step one, and the actual murder is horrifying, a slow, gruesome affair played out over three pages (an eternity in Silver Age time), with Luthor forcing Superman's friends to watch. And the way he's presented afterwards, utterly remorseless, reveling in what he's done, is one of the most genuinely sinister moments in the character's history. 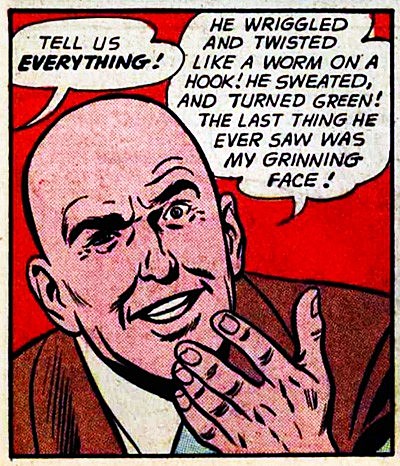 It's so brutal that Siegel's narration even returns at the end to comfort the reader and remind them that there wasn't really a fictional gruesome murder in their fictional stories and that Superman will be back next month... 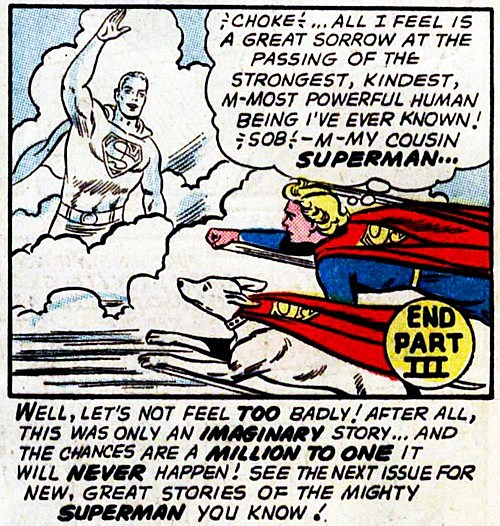 ...but even then, he allows for a chance, even a small one, that this might just be how it all ends for Superman. So great.

It's really interesting to me that the era of the Imaginary Story came to a close with Crisis on Infinite Earths, which was essentially a large-scale admission that it was all made up and it could be added to, subtracted from and rebooted as necessary, which led to a style of storytelling that was more geared towards longer form stories and continuity that was built around a constant state of change. And it's worth noting that when that era came to a close, its passing was marked by two of the most famous "Imaginary" stories of all time: "Whatever Happened to the Man of Tomorrow" and The Dark Knight Returns, both of which were the endings that their star characters had never been able to have before.

It's also worth noting that in the Modern Era, the Imaginary Story was replaced by its old rival storytelling technique, the Hoax. When you think about it, the Silver Age "Death of Superman" was a story about the actual death of Superman. He doesn't come back at the end. He is an ex-Kryptonian. He has ceased to be. But the Modern Age "Death of Superman," the big fight comic from 1994 about the monster in bike shorts with bone claws, isn't about Superman dying at all. It's about Superman being punched into a coma and everyone going "oh he's dead!" so that they could sell a jillion comics polybagged with armbands, with every intention of bringing him back a few months later with a mullet. It's a hoax, as is virtually every other "death" in super-hero comics. That doesn't necessarily make them less enjoyable, but it does put that elaborate lie I mentioned above under a lot of stress.

As for Marvel's What If comics, I've never really been a huge fan of those. They have a similar focus on closure, to the point where the answer to almost every question in the Marvel Universe that starts with "what if..." is "everyone would die," but for some reason they've never really hooked me.

I think what it comes down to is that the Marvel Universe has always seem less bound to a particular status quo than DC's. It feels more fluid and willing to shift and change as the stories interconnect, so finding out what it would be like if things were different doesn't require a separate story. You just need to wait around a little, and all that stuff will happen: 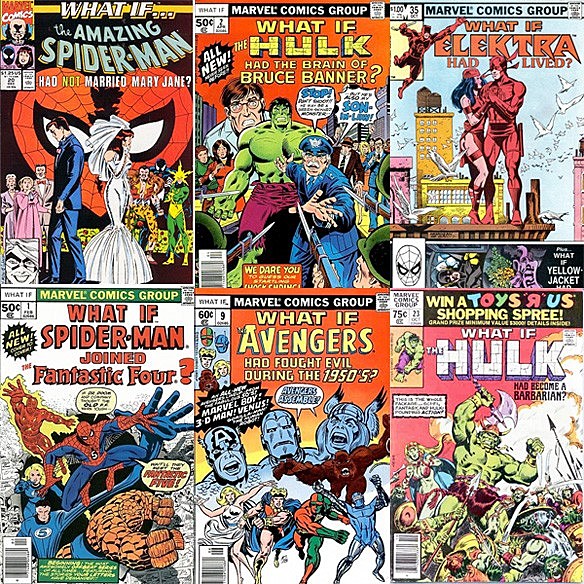 Plus, I've never really forgiven What If for "What If The Punisher's Family Hadn't Been Killed," in which the Punisher's family gets killed anyway. That's not how it works, guys!

That one where Conan gets stuck in the '70s and walks around with a leopard on a chain like the Cimmerian Tony Montana, though? That one's awesome.

Filed Under: Continuity, Curt Swan, CurtSwan, Imaginary Stories, ImaginaryStories, Jerry Siegel, JerrySiegel, superman, What If, WhatIf
Categories: Ask Chris, Opinion
Comments
Leave A Comment
Superman and Wonder Woman Cameos Cut From ‘The Flash’
Every DC Comics Movie, Ranked From Worst to Best
Michael B. Jordan Developing Black Superman Series For HBO Max
Every Marvel Character In the ‘What If…?’ Trailer
Warner Bros.’ Next ‘Superman’ Film Will Focus on a Black Superman
Someone Put Henry Cavill’s Superman Mustache Back Into ‘Justice League’
J.J. Abrams Is Producing a New ‘Superman’ Film Written by Ta-Nehisi Coates
DC Is Making a Comic-Book Sequel to ‘Batman ’89’
Marvel’s New Series Will Explore A World Without Avengers