Q: I just watched the Batmobile documentary on the Blu-ray of The Dark Knight Rises. How important is Batman's whip, really? -- @graemevirtue

A: Before I get into actually answering this question, I just want to take a moment to reflect on the fact that you refer to the Batmobile as a "whip." If any of you out there would like to draw a picture of Batman ghost-riding through the streets of Gotham City, then please, by all means, you can find my email address at the end of the column. 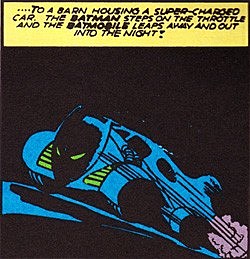 Anyway, the Batmobile is easily one of the most distinctive and recognizable elements of the Batman mythos, but I've never really considered it to be important to the character at all. There are things that are truly necessary for the character that can't be taken away without altering it beyond recognition -- the tragic origin, the bat imagery and reliance on fear as a weapon against crime, the status as a man without super-powers who forges himself through sheer determination -- and there are elements that aren't strictly required but that add depth to the character -- Alfred and Robin as the surrogate family, the Utility Belt that represents his preparedness, the wealth that allows him the freedom to fight crime as his full-time "job" -- but of all the things that make up what we think of as Batman, the car is way on the outskirts of what actually makes up the character.

When I did that in-depth breakdown of the opening to Batman: The Animated Series a while back, I spent a little time talking about how the Batmobile's major contribution to the imagery set up in that perfect 57 seconds of television is that it tells us Batman has a car. Because of that, we know that Batman needs a car, and that the one he has is a custom job that's like nothing else on the streets. There's a lot of subtext going on with the Batmobile -- it reinforces the idea that he's a man of means, but not a man of superpowers and, to a lesser extent, that he is a dude who is straight up obsessive about branding himself. He can't fly to wherever there's trouble so he has to drive, but he still drives in the coolest car you can imagine, one that's distinctive enough that you know he wants people to know who he is and what he does. Batman is a guy who wants Crime to know he's coming for it, and the Batmobile, with its stylized frame and flaming jet exhaust, does a pretty good job of that.

But at the same time, it's not really something he needs. All of those elements are introduced and reinforced in better ways by other things that are part of those stories. Take the Bat-Signal, for example: 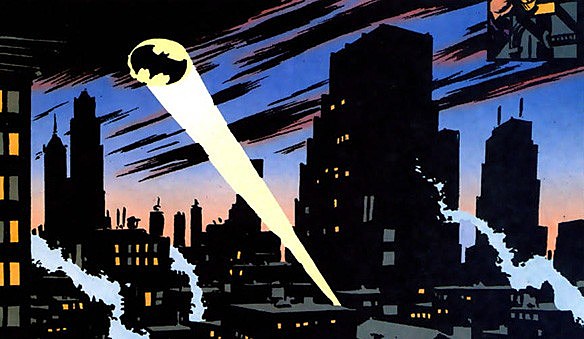 I love that goofy thing. It's exactly the kind of larger-than-life, bizarre superhero method of communication that only makes sense in the context of superhero comics, but it also has so many subtle reinforcements of how Batman works. For one, it shows both that he's an ally of the police, and that he deals with things that are so extraordinary that even the way they communicate with him has to be strange. That's one of the reasons I've never really liked the Bat-Phone hotline from the '66 TV show. Calling up Batman on the phone, even a special phone, is just so pedestrian, especially when he can't be bothered to pick it up himself and has to have his manservant do it for him.

More than that, though, I love the (completely ridiculous) idea that the Bat-Signal is visible from the entirety of Gotham City. It's the grandest possible version of that bit where he wants Crime to know he's after them, a literal shining light in the darkness reminding everyone of his presence. It's almost mystical in how it summons him, this huge, visible mark on the city that shows his protection over it, which brings us back to the branding and the power of symbols that's such a huge part of how he works as a character. It's why I love that one scene at the beginning of The Dark Knight so much, where the crook looks up, sees the Bat-Signal, and decides to just go inside and not do anything illegal that night. Smart guy.

It does so much all at once, in such a weirdly elegant way. By contrast, the Batmobile is just a way to get him from one place to another, a necessary element of living in a fictionalized version of New York that gives him a lot of ground to cover. And even then, it's probably the single least practical thing about Batman.

I am fully aware that superhero comics are about as far from reality as you can get, but the Batmobile stretches credibility in a way that Boom Tubes and Helicarriers don't even get close to. The first time I went to New York, there was a moment where I was walking through Greenwich Village, waiting for the traffic lights to stop so I could cross the street, and I remember saying, out loud, "Man, the Batmobile is bulls**t."

I realize this is a weird place to draw the line in a comic that involves freeze rays and a number of abandoned amusement parks that no economy could've ever supported, but seriously, have you seen the traffic in a big city? There is no possible way that Batman could get anywhere in a car, let alone the kind of giant, jet-powered monstrosity that he tends to roll around in. And where the hell is he going to park? He'd be better off investing in a MetroCard.

And when he actually got somewhere -- like, say, arriving at police headquarters -- is he just going to leave the Batmobile outside at the meter while he walks in and takes the elevator up to Commissioner Gordon's office? And then there are the other problems inherent in having a super-sweet car in a city that's pretty much defined by a truly astonishing crime rate: 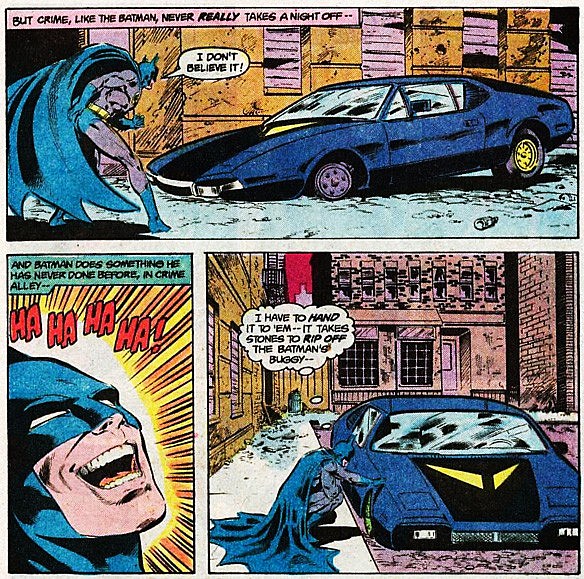 Once you start thinking about it, you can't ever look at it again without thinking of how impractical it is. And it only gets worse when you compare him to other heroes.

Look at Spider-Man. One of the reasons he's such a great character is because, by accident or design, his powers are perfectly suited for an urban environment. He can jump super high, climb up walls and swing between buildings. He's inherently dynamic within a world dominated by skyscrapers that rises up vertically as much as it stretches out on land, to the point where there are plenty of comics that make a joke about it when he has to leave Manhattan and go somewhere that doesn't have web-friendly flagpoles and scaffolding everywhere.

That's why I've always preferred to see Batman swinging through the city on his grappling hook, or even gliding on his cape, Arkham City-style. It's more dynamic, and allows for those cool shots where he's silhouetted against the moon, or for dropping onto rooftops and crashing through skylights, or -- best of all -- for those Jim Aparo stiff-legged wrecking ball kicks. The alternative just leads to the thought of Batman being stuck in rush hour traffic, something that likely sticks out because it happened in the very first issue of Batman I ever read: 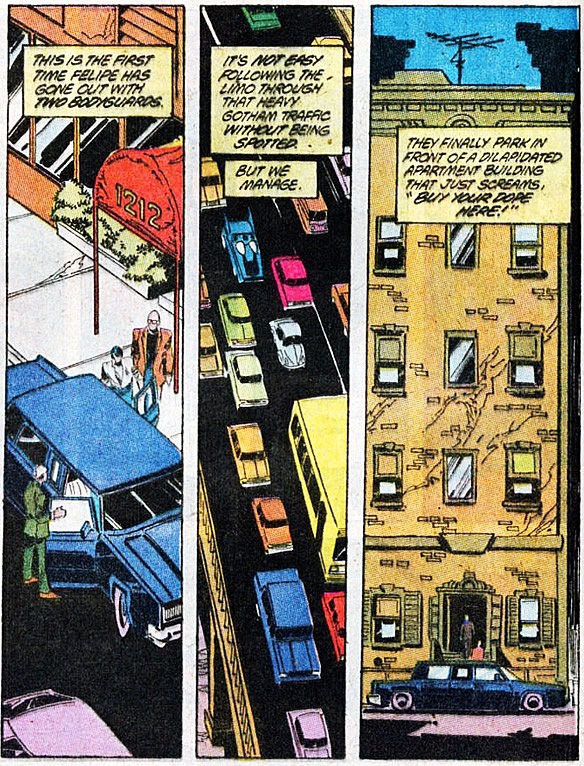 That bit in the middle still cracks me up. "It's not easy following the limo through that heavy Gotham traffic without being spotted, probably because we are driving a blue convertible with gigantic fins and my face painted on the hood." The World's Greatest Detective, ladies and gentlemen.

To be fair, the most recent model of the Batmobile, introduced by Grant Morrison and Frank Quitely in Batman and Robin #1, solves pretty much all of my problems with it because of one simple fact: It flies. 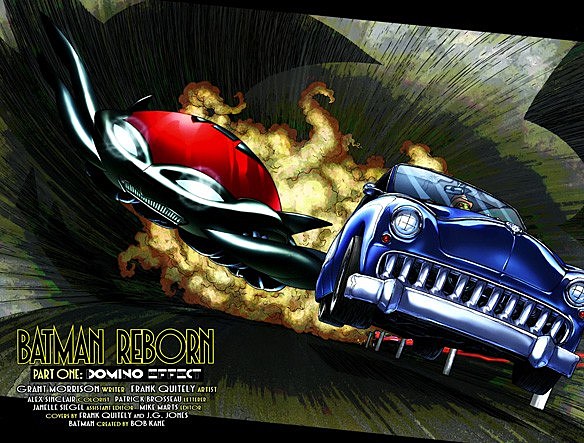 That one little addition cuts out all the problems with traffic and parking, with the added bonus of giving Batman a platform from which he can make all those dramatic drops onto rooftops. Plus, I just love the design of it and how it's a smaller, compact vehicle that seems more like it's built for a crowded urban environment. It's a huge contrast to the design that had prevailed for the previous 70-odd years, the gigantic (and usually extremely phallic) tanks and jet-powered battering rams. It left realism behind for something that actually felt more practical, and pretty appropriate for a guy who owns a robot dinosaur.

Still, more than anything else, the Batmobile has always struck me as set dressing, which leaves the question of why it's everywhere. It's huge in the marketing and in the toy designs, and like you said in your question, there's a documentary about the live-action versions on a movie that has nothing to do with Batmobile History. So why is something so unnecessary so prominent?

My guess? They just look cool. 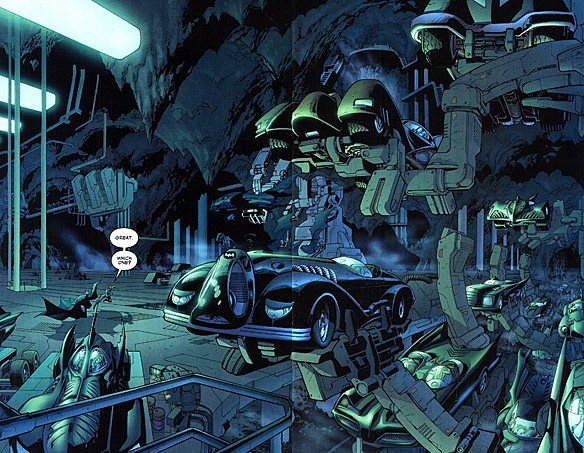 Seriously: They're very visually interesting, especially because each design ends up being visually tied to a particular era. The George Barris model from the '66 show or the crazy Norm Breyfogle spaceship-lookin' thing from the '90s, that Anton Furst design from Batman '89, the late '70s version with the bubble windshield, that neon nightmare from the Schumacher movies -- they all tend to be very visually striking, and seeing them all lined up together makes for a pretty interesting stylistic timeline of the Batman franchise. I don't even like the Batmobile that much as a concept in the story, but I still like seeing different takes on it and the aesthetics they're working with.

So does Batman need a car? No, I don't think so. But he's had one for longer than he's had a sidekick or a butler, so I guess it's a pretty good thing that they look neat. Especially if anyone wanted to draw Batman ghost-riding the whip. Hint hint.