Q: Who is the best 70s style (kung fu, monster, urban, or all of the above) comic book character other than Marvel's Dracula? -- @talestoenrage

A: This is actually a really tough question to answer, and not just because I had to think about it for like two minutes before I realized what you meant by "urban" and stopped trying to narrow down characters who lived in cities. It'd be one thing if you asked me to tell you which character most personified '70s comics as a whole, because really, you can't get much more on the nose than a demonically possessed motorcycle stunt rider driving around the desert getting into fights with dudes dressed like giant eyeballs. 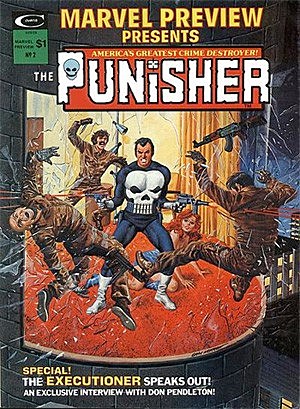 But the best? That's a little more difficult.The obvious answer -- for my taste, anyway -- is The Punisher, but that doesn't really seem to fit quite right. Don't get me wrong, though, he is definitely tied into a certain '70s aesthetic, and not just because that's when he was created. With his past in the Vietnam war and his revenge-crazed one-man war against the mob, Frank Castle is directly descended from Don Pendleton's long-running Mack Bolan: The Executioner novels, with helpings of Dirty Harry and Death Wish thrown in for good measure. The first big black-and-white Punisher magazine even ran an interview with Pendleton, just in case anyone missed the connection.

The thing is, while he's immediately compelling as a dude who runs around wearing a gigantic skull on his chest trying to shoot Spider-Man and/or the Jackal, the Punisher doesn't really get to the point where he can stand on his own until he gets into his own series. The elements of the '70s vigilante craze are definitely still there, but the adventures that really shaped the character come from a different place that's distinctly the '80s, as filtered through the usually bizarre lens of Marvel Comics. Between the opening story's assault on a cocaine kingpin, the two-part Class of 1984-inspired story where Frank becomes a substitute teacher to fight the Kingpin's teenage goons, and the Stone Cold-esque story where he infiltrates a biker gang as a meth cook named "Freewheelin' Frank," Mike Baron's run on Punisher might as well be sitting in a video store next to a VHS copy of MegaForce.

Note: This is not a complaint, and may in fact be the highest compliment I can pay.

So with that dude and Dracula out of the running, there's really only one answer for who's the best '70s style character. Or rather... one duo: Power Man and Iron Fist. 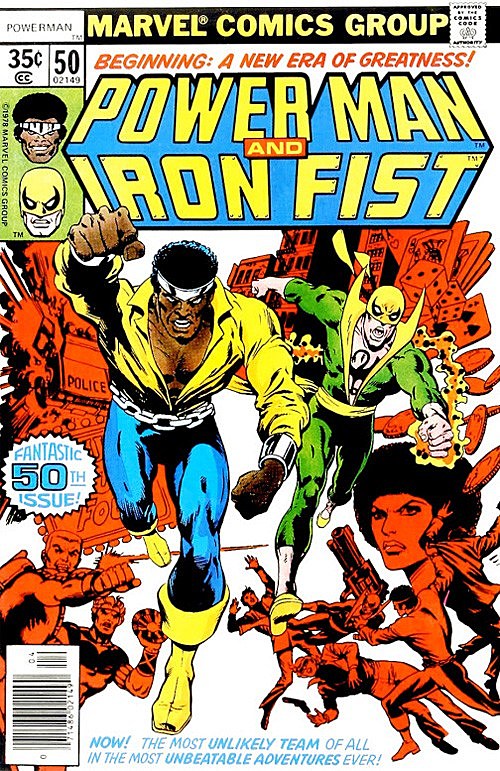 I these guys so much, and while I like them a lot on their own, it's when they got paired up in 1978 that things really got great. Not only did they manage to have way more success (and about 25 more issues) as a pair than they ever did alone, they did it by hanging onto two decidedly '70s genres way longer than they should've been able to.

Unlike their competitors over at DC, who only ever managed to get the reasonably terrible Richard Dragon: Kung Fu Fighter out of the deal, Marvel really went all-in on the kung fu craze. Iron Fist made his debut in 1974 -- only a year after the smash hit release of Enter the Dragon -- and he wasn't alone. Master of Kung Fu and Deadly Hands of Kung Fu (featuring the Sons of the Tiger!) were all providing the perfect places for ads promoting Count Dante's Dim-Mak Death Touch, and what they lacked in the kind of motion and choreography that you get from watching a movie, they made up for it in giving you the kind of stuff that you could only really see in comics -- especially in Iron Fist. That was a book about a dude with a magical glowing hand that could punch through anything that he got by choking out an actual dragon, so yeah. It's pretty exciting.

Of course, looking back, it's also pretty cringe-worthy in a lot of ways, particularly in that he's a blue-eyed, blonde-haired white kid who gets swept off to a mystical faux-Asian fantasy land to become their Chosen One and save them from assaults by broccoli people. But, you know, it could've been worse. He could've been Richard Dragon. 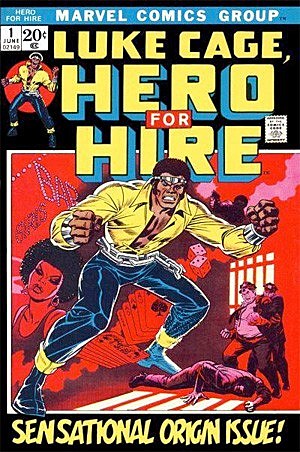 Luke Cage has his share of cringe-inducing moments too, although being the first black superhero to debut in his own title helps ameliorate a lot of them. Considering that he was, at least in part, an attempt to cash in on the success of blaxploitation movies like Shaft and Super Fly, it's not really much of a surprise that his origin story seems like it's straight out of one of those flicks: He's a wrongly convicted man who gets experimented on in prison, given super-powers that he uses to escape. and then decides to turn a profit as a Hero For Hire!

This is, without question, one of the greatest concepts in the history of comics. I mean, the Fantastic Four had essentially been professional superheroes since they started, but a dude with super-strength and diamond-hard skin who operated out of a storefront and charged by the hour? That's basically genius, and the title alone is so great that I'm always surprised there isn't always been a book called Hero For Hire coming out.

The part where it gets a little uncomfortable is when Luke spends less time actually heroing for hire a whole lot more fighting "inner-city" themed bad guys like his ex-cellmate Shades and a dude called the Cockroach. To be fair, though, that's also around the time that he flew to Latveria to collect a $200 debt from Dr. Doom, in which Steve Englehart and George Tuska gave us some of the best panels of the decade. I'm pretty sure everybody and their mother has seen Cage's "where's my money, honey" at this point, but let's not forget Cage no-selling Doom's armor...

... or Dr. Doom cracking up at how awesome this guy is:

Point being, these were two characters who were completely and thoroughly rooted in trends of the time, but they were completely different trends. I'm not sure whose idea it was to throw them into the same comic instead of just canceling the books outright -- believe it or not, Marvel Comics: The Untold Story does not devote several chapters to the decisions behind Power Man & Iron Fist like I'd hoped -- because there is no reason at all why it should work.

In a lot of ways, PMIF is the first big mashup comic that really got it. Even characters that were meant to contrast with each other, like the X-Men, were still sort of designed to go together and play off of each other. Luke Cage and Danny Rand were barely even in the same genre. Sure, they're both superheroes, but there's not a whole lot of overlap between street-level battles with a dude with a mace for a hand named Mace (amazing) and battling broccoli people alongside the ultimate technique of Lei Kung the Thunderer. And yet, that odd-couple aspect worked perfectly, largely because it was Chris Claremont and John Byrne at the top of their game shoving it all into one book to see what happened.

Plus, they're referred to in the "next issue" boxes as "Luke and the Fist," and if "Hero For Hire" isn't on the cover a comic every month, that should be.

It's hard to pin down just what is that worked so well about their partnership -- uh, Power Man and Iron Fist, I mean, although I guess you could probably say the same for Claremont and Byrne -- but a lot of it just comes down to simple fish-out-of-water storytelling. The best bits of that early PMIF run come from the Fist being this weird, naive kid who can bring down a building with a punch but has no idea how to deal with the city, or when Luke gets dragged off into a Shaw Bros. movie for three or four issues.

Seriously, the Mary Jo Duffy/Kerry Gammill story from Power Man & Iron Fist #75, where they go to K'un Lun and lead an army to fight ninjas, broccoli people and a guy who rides a flying green tiger through space? 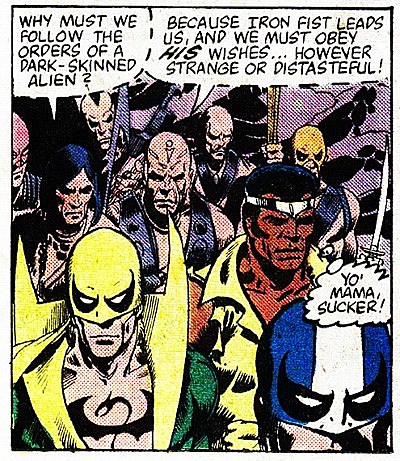 It's probably the best comic ever printed.

Creators like Claremont and Duffy sold the relationship so well that readers wanted to see these guys become friends, and that kind of compelling storytelling meant that the trend-hopping kung fu and blaxploitation elements weren't carrying the whole burden of creating reader interest. It's all still in there, believe me, but it becomes less about trying to copy movies and more about seeing how this stuff interacts and what kind of fun you can have with it. It kept all the '70s genre stuff but outlasted the actual trends in a way that I don't think anything else has really done since.

I mean, we're not celebrating the 150th issue of Pog Man and Rollerblader now, are we?

If you've got a question you'd like to see Chris tackle in a future column, just send it to @theisb on Twitter with the hashtag #AskChris, or send an email to chris@comicsalliance.com with [Ask Chris] in the subject line!