Q: What with Halloween approaching, could you please explain why Marvel Dracula is more awesome than any Dracula alternative? -- Matt, via email

A: Long-time readers who recall last October's Dracula Week festivities may recall that I straight up love me some Marvel Dracula. He's probably my favorite version of the character, and considering that Dracula has 113 years of public domain adventures that have led to both the super-heroic Dell Comics version and at least two separate Moon castles, that's saying something.

There's just something about the Marv Wolfman/Gene Colan "Tomb of Dracula" version that has something the others lack that sets him above the competiton. And in a word, that something is The DracStache. 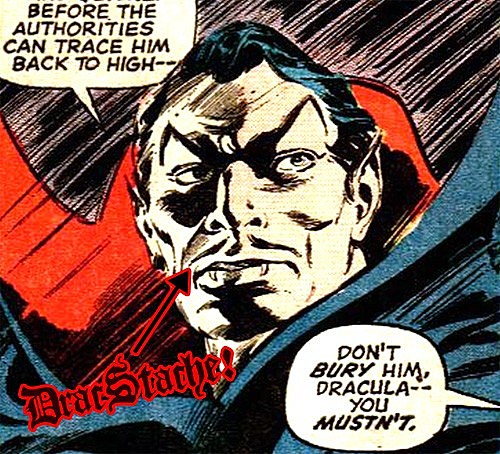 Oh man, just look at that thing. Not only is it perfectly groomed, but when you toss it up next to eyebrows so arched that they are actually right angles, and you have some facial hair worthy of the Lord of the Vampires. It's just science.

Okay, okay, the moustache is only part of the appeal, but it's a big one. When you get right down to it, the reason Marvel Dracula is so awesome is that he's essentially Dr. Doom in a three-piece suit and a totally awesome high collar, and by that, I mean that he's easily one of the best smack-talkers in the Marvel Universe. I mean, it's one of the most regrettable facts about my life, but I sometimes go days without having the opportunity to call someone a witless poltroon, but Marvel Dracula? 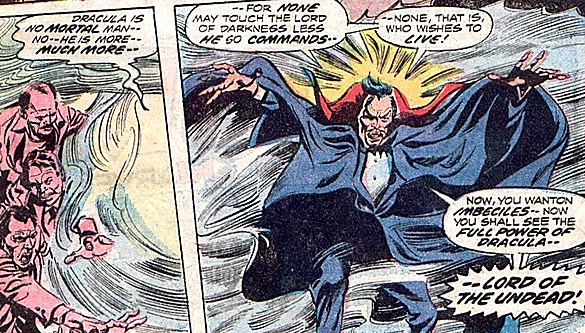 This is a guy who isn't just going to kill you, drink your blood, and quite possibly raise your body to be one of his mindless servants, but he will straight up insult you while he does it. And these aren't your average, insults, either: they are the polysyllabic cut-downs of an educated gentleman.

Take note, kids: educational scientists have proven conclusively that the best way to prepare for the SAT is to have Dracula yell at you. Wanton : Imbecile :: Sniveling : Lackey.

Also, Marvel Dracula is a raging egomaniac who constantly narrates his own adventures -- another similarity with Doom -- and when it's done right, which it frequently is with both characters, the results tread that line between utterly badass and absolutely hilarious. Seriously, check this guy out: 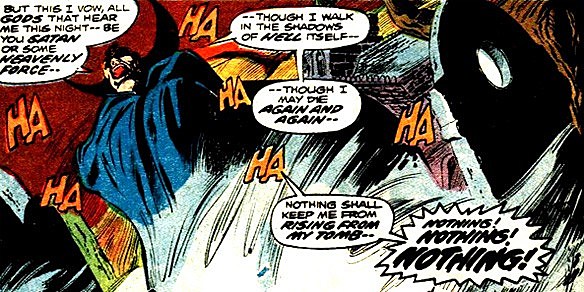 Standing in a cemetery and laughing while you swear by Satan that nothing will keep you from clawing your way out of your own grave? That's so metal that it ranks at a solid 666 Milidios (for the record, that's the highest possible result despite being out of order numerically).

And on the flipside, we have this: 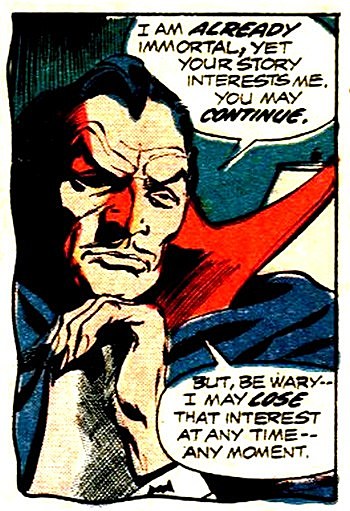 Marvel Dracula is bored to sleep by your promises of immortality, and will most likely kill you just to spice up his evening. This is a man who hears the secrets of immortality and responds with "Oh I'm sorry, were you not aware that I'm f***ing Dracula?"

More than anything else -- even the moustache -- I think it's this astonishing arrogance that makes Marvel Dracula so appealing. It shows up in other interpretations too, notably in Castlevania Dracula (who steals his smack-talk from André Malraux) and "Buffy the Vampire Slayer's" racist Dracula (whose creator, I think it's safe to say, probably read some Marvel comics about vampires growing up), but the Marvel version just completely nails it in only the way that a universe built on ranting megalomaniacs can. He's not just a vampire, and he's not even just a really awesome vampire. He's The Lord of All Vampires, which (to him anyway) pretty much means that he's better than you.

Also, credit where credit's due, Marvel Dracula knows how to accessorize: 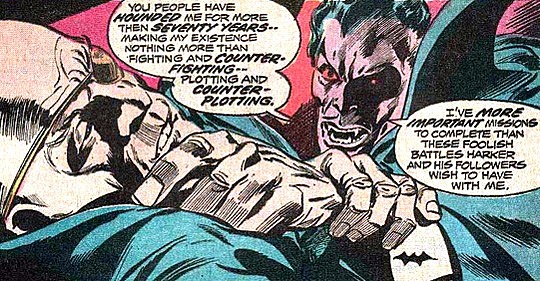 Behold! The classiness of bat-shaped cufflinks! Not even Bruce Wayne can pull those off.

Q: I found out today that Batman's Alfred was once killed off and later brought back. Tell me more about this craziness! -- desktophippie

A: At first, I was planning on calling you out for identifying that you were asking about "Batman's Alfred," as though there were some other Alfred I'd be qualified to answer questions about, but then I remembered that it's entirely within the realm of possibility that someone would ask me a question about Lord Alfred Hayes. But as far as the strange death and resurrection of Alfred Pennyworth, I'm actually pretty well-acquainted with how it went down, as it was a plot point in the very first comic book I ever read.

According to Michael Fleisher's "Original Encyclopedia of Comic Book Heroes v.1: Batman" -- the reference book no Batmanologist should be without -- the whole thing started in June of 1964's "Detective Comics" #328, when Alfred is "taken captive by the notorious Tri-State Gang and locked inside an old prison cell to await a gangland-style execution," which is pretty hardcore by the standards of the Silver Age. Batman and Robin are also taken prisoner, and while they think Alfred's already dead, he thinks they've been killed, and they end up breaking out and swearing vengeance on behalf of the other. Unfortunately, one of those vows ends up being necessary, as Alfred gets crushed by a falling rock:

To be fair, though, you have to admit that if he had to die, saving Batman's life while on a motorcycle in a construction site is a pretty awesome way to go. It's how I hope I end up.

After beating the mess out of the criminals responsible, Batman (as Bruce Wayne) forms a charitable organization in his memory, The Alfred Foundation, and then Aunt Harriet shows up to live with Bruce and Dick, setting the stage for her appearances in the "Batman" TV show two years later.

But, this being comics, Alfred's "death" wasn't all it was cracked up to be. Six months later, after dealing with a tremendous goof called the Grasshopper (not to be confused with the Great Lakes Avenger of the same name), Batman started getting harassing phone calls from the mysterious Outsider: 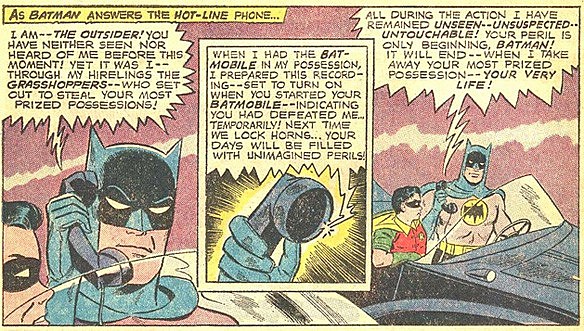 This being the days before caller ID, readers had to wait another two years before the Outsider -- an unseen figure who manipulated the criminal underworld from the shadows -- was finally revealed to be... this guy: 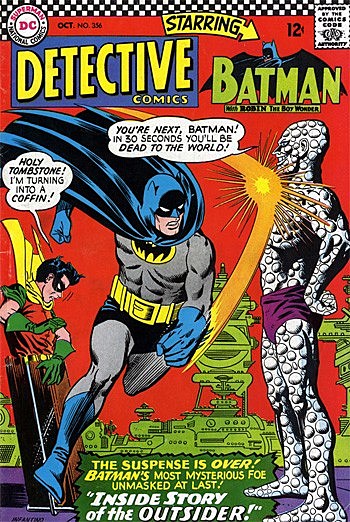 Since you're reading this here, you can probably guess that the Outsider was in fact Alfred, but I've got to hand it to creators like Gardner Fox and Sheldon Moldoff for playing the long game with this one. That's a long time to wait for a payoff today, and we're used to stories that take six issues to finish. In a time when you got three complete stories in every issue, dragging something out for two years left enough time for a real mystery to build up, and I doubt that anyone could've pieced together the identity of the Outsider from just reading the stories.

Of course, that's largely because it also makes absolutely no sense. Let's take this by the numbers, shall we? 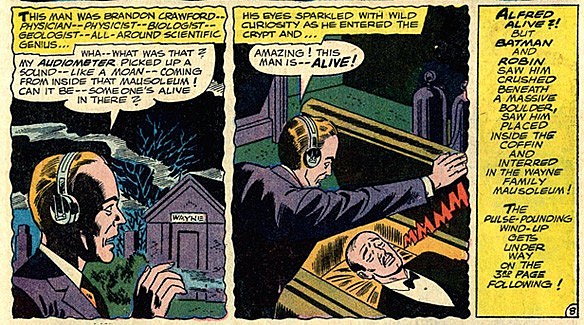 1. You would think that friggin' Batman, of all people, would be able to tell whether someone was alive or dead. At the very least, he should've had a doctor look things over before dumping him in a coffin and sticking him in the mausoleum in the back yard of Wayne Manor.

2. Guys, when you have a footnote that long in order to explain "science" so dubious that you don't think the people reading books about Red Kryptonite and Atlantis are going to accept it, you might as well just have it say "just go with it, okay? --Ed." 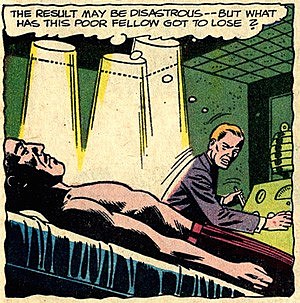 3. No one in a comic book has ever said this and then been pleased with what happens next. 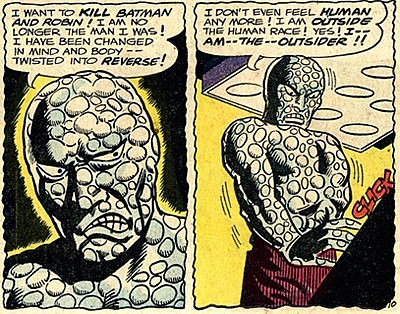 4. And so, for reasons that are never explained, the regeneration ray brings Alfred back to life, but also makes him look like a cobblestone driveway and turns him evil.

5. Not only does the regenerator ray turn Alfred into the Outsider, but it also kills the scientist, and also also restructures his body to look just like Alfred, so that the Outsider (who is actually Alfred) can put "Alfred's" body back into his coffin. And then he decides to kill Batman and Robin.

All of this is explained in four pages.

Eventually, though, Batman punches the science out of him and things go back to normal. 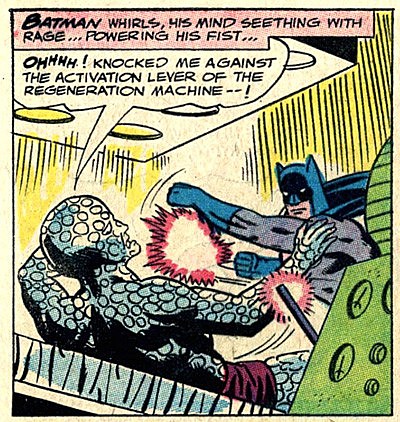 Thus, Alfred comes back to normal life, and the charitable Alfred Foundation is renamed as the Wayne Foundation in memory of Batman's parents, which -- again -- is something you'd think he would've done before then. 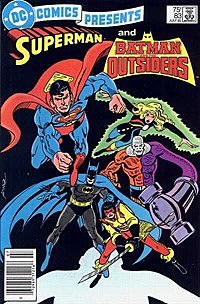 Fast forward 29 years to 1985, when a three year-old Chris Sims is taken to the Ameristop across the street from his grandparents' house and makes a grab for "DC Comics Presents" #83, by Mike Barr and Jim Aparo, no doubt attracted by a very colorful cover featuring Superman, Batman, and the team Batman had been running with at the time, The Outsiders.

I'm pretty sure I wanted this one because of the colorful cover that showcased a lot of super-heroes, but the interiors offered up a story that came about -- and I am 100% sure that this is the genesis of this issue -- because Mike Barr thought it would be funny if The Outsiders fought the Outsider.

Thus, Alfred turned back into a monster, Superman pitched in to defeat him, and one of my earliest memories becomes an infodump about a completely insane "Batman" arc from 25 years before I was born, drawn by Jim Aparo. Not gonna lie, folks: You can pretty much draw a straight line from there to what I'm doing right now.

And that's the time that Alfred died but didn't and then was a monster for two years.

And now, some quick answers:

Q: With a new superstar series in the works I have to ask: how does Moon Knight compare to Batman for you? -- Max_Barnard

Q: What makes a good con for you? -- JohnnyWeird

A: People. I don't do much back-issue hunting anymore, so the real attraction of cons for me is just meeting folks and having a good time with friends, and almost every show I've been to has provided that opportunity. As many gripes as there are can often be about the comics community's defensiveness and penchant for "snark," there are a ton of talented people out there who are just super-nice, and plenty of fans and like-minded people who feel the same.

A: I honestly don't know; it's been literally decades since I've had one. I do in theory, as I like caramel and love apples. If only there was some national holiday that would give me a chance to sample them once again!

Q: What do you think of this sketch of Rowdy Roddy Piper by Jerry "The King" Lawler I got at NYCC? -- adamrjones24 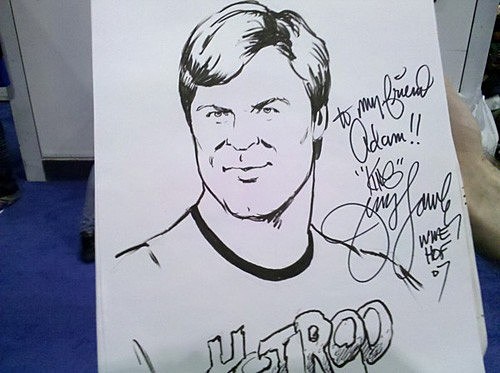