Normally, ComicsAlliance Senior Writer Chris Sims answers comics and comics culture questions from our readers every week, but today, in honor of Halloween, things are about to get terrifying! This week, Chris answers your spoooooooky questions... from beyond the grave!

Q: If you could stitch together a Frankenstein monster from dead superheroes, who would you pick? -- dbed

A: Ah, so you wish for me to share the secrets of my forbidden research, do you? I knew this day would come. They laughed at me. They called me mad. Mad, I tell you! Which is to say that the problem with being a super-hero resurrectionist is that those guys tend to resurrect themselves on a pretty much monthly basis, so when you're constructing your own super-hero flesh golem, you're limited to a small but ever-changing pool of raw (and rotting) materials. But that doesn't mean I couldn't do it. Call me mad? I'll show you... I'll show you all!If I had my druthers, I wouldn't need more than one body to pull off my desired bit of Frankensteining. I'd just bring back one guy... 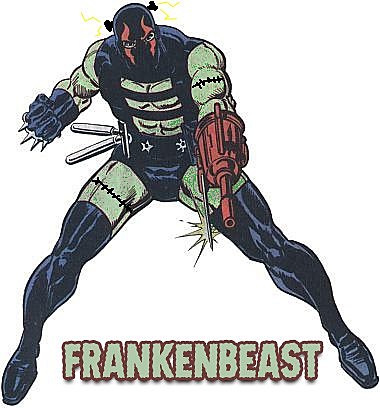 ...and if you say you wouldn't read that, you are clearly lying and we have nothing further to discuss. Unfortunately, that would violate both the spirit and the letter of your question, so I'm forced to grab the shovel and my hunchbacked assistant and go raid for some more parts.

For the head, I'd decapitate the thoroughly exploded body of Aztek, the Ultimate Man: 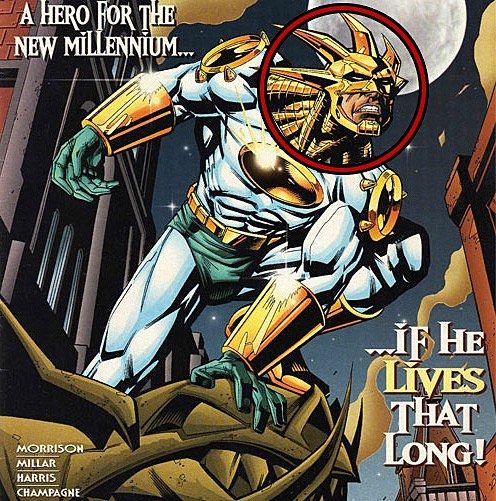 For one thing, you pretty much want your Frankensteins to be pretty malleable when it comes to the brain, and Aztek's mind was both shaped by the mysterious Q Foundation and accessed by the memories of his predecessors. At the same time, you don't want anyone who won't understand when you yell "put down that torch, you wretched abomination!" and Uno here was at least smart enough to think his clothes into the fourth dimension when he didn't need them.

Plus, that cranium comes with one of the sweetest helmets in comics not designed by Jack Kirby. I guess you could say he's... ahead of the game.

For the torso, I'm going to go with Terry Sloane, the Golden Age Mr. Terrific: 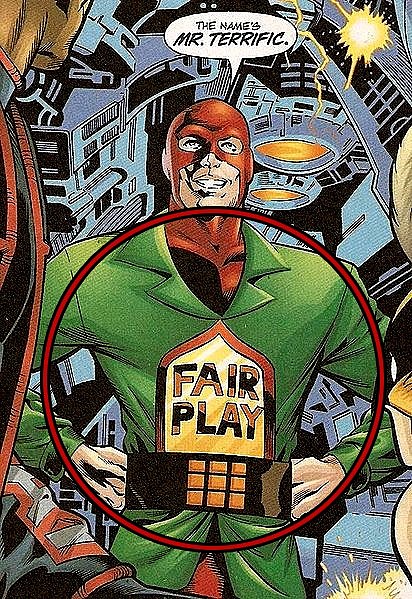 Why? Because stitching together corpses and infusing them with life like a Modern-Day Prometheus (not the guy who fought the Justice League), you're playing God. And when you play God, you've gotta play fair.

Even so, when you're building a patchwork monstrosity, it's easy to follow the pattern established by Dr. Victor Frankenstein. Much like Jack Kirby, Victor was the master whose work sets the standard, but also like Kirby, he was an innovator, and a better tribute than slavish devotion is finding a way to improve on the flaws of his work. And when I look at Frankenstein's infamous monster, I notice a huge flaw to improve on: The dude has no guns whatsoever.

That's why my version gets the right arm of Tommy Monaghan, a.k.a. Hitman... 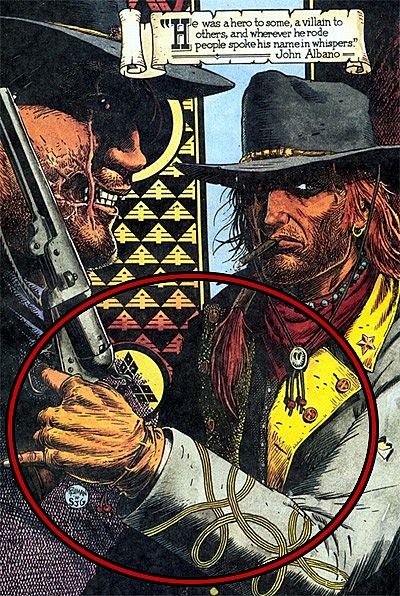 For the lower body, I'm going to bend the rules a little bit and branch out from super-heroics just a shade, starting with the pelvic area, which comes, of course, from Darkseid: 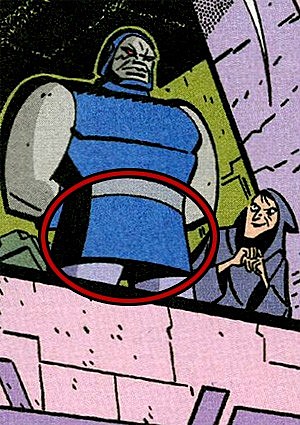 Because really, if the Ultimate God of Evil thought the comfort and ventilation of a belted man-skirt was the way to go, who am I to argue?

And for the final touch, we have the legs, and I thought pretty hard about this one. Do I go with Air Wave, who could rollerskate on power lines? Judomaster, whose kicks would make my creation a whirlwind of gunfire and martial arts? The sticky, two-toed feet of Nightcrawler? All good suggestions, but in the end, there was really only one choice: 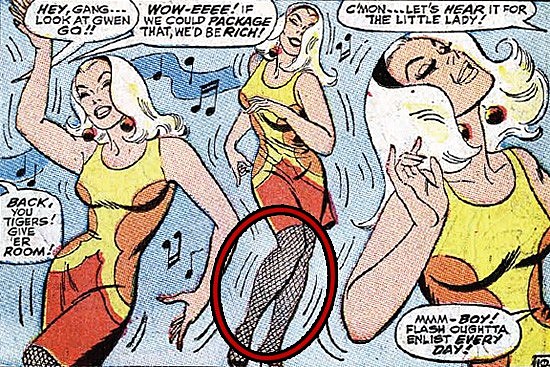 Imagine it. A seven foot-tall monstrosity in a five-pointed golden helmet and a man-skirt made of pure evil with the words "FAIR PLAY" emblazoned on its stomach, firing pistols in both hands as it go-go dances at you on a set of dynamite gams.

Cap that sucker off with Thomas Wayne's Moustache, a piece of facial hair so powerful that its loss pretty much drove an entire city into crime, and I think we can all agree that I've created the most terrifying and unstoppable monster history has ever seen.

I expect fan-art by Monday.

Q: What's the horror movie you saw at too young an age that gave you nightmares? Alternately, what's the totally milquetoast not scary at all thing that scared the sh-- out of you when you were 3? -- Chris Burnham, via email

A: I don't usually talk about the things that scare me in public becaue... well, mainly because my friends are all jerks, and I know that as soon as I do, I'll get an email with an attachment labeled "BATMANUPPERCUTSASHARK.jpg" that's actually a picture of, I don't know, a clown with spiders for hands or something. In fact, if Andrew Weiss is not renaming a file to that exact phrase right now, I will be genuinely shocked.

But, in the spirit of the season, I'll cop to one major childhood fear. The fact is, I didn't see a lot of scary movies when I was a kid, because I was extremely easy to frighten. I remember being absolutely terrified of Gremlins, but I can't tell you a thing about the movie that I haven't picked up secondhand, as I saw it when I was like three and never went back to check it out. As a result, I never saw all that many horror movies.

But I did see the trailers that would air on TV, and at age six, I was utterly friggin' terrified of Chucky from the Child's Play movies.

I had it so bad that I couldn't even stay in the room when the already-pretty-creepy commercials for My Buddy, and I wouldn't set foot in the aisle at Kay-Bee Toys where they stocked them, no matter how many Batman figures were sharing the space. And to make matters worse, my sister was -- at least for a time -- totally into Cabbage Patch Kids.

I'm not gonna lie, I stayed pretty solidly freaked out until around age 12, when I started to get a grasp on physics and spatial relationships, and that put an end to that fear pretty handily. I mean, I'm not particularly strong, but I'm 5'11" and I have the mass of someone who reads comic books for a living. I figure one good punt on any possessed doll... 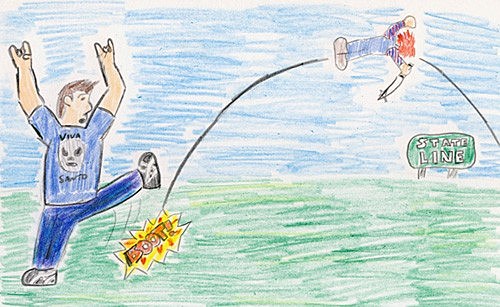 ...and I don't have to worry about that for at least a couple days.

As for what relatively benign thing scared the crap out of me at a tender age, look no further than this: 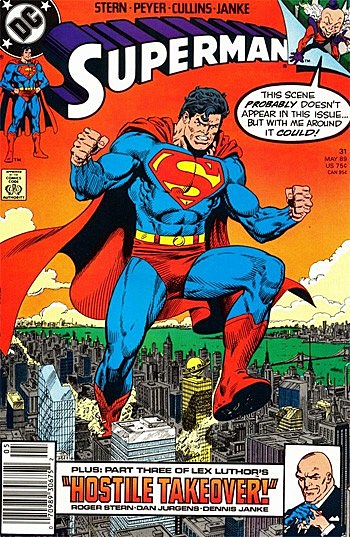 I was six years old when this thing hit the stands, and it freaked me out. Its Mr. Mxyzptlk's second post-Crisis appearance, and you can forget about "Whatever Happened to the Man of Tomorrow," this thing is why I find that little 5th dimensional runt to be one of Superman's creepiest villains to this very day.

I remember trying to read it multiple times when I was a kid and rarely being able to get past the second page, because that's where this happens: 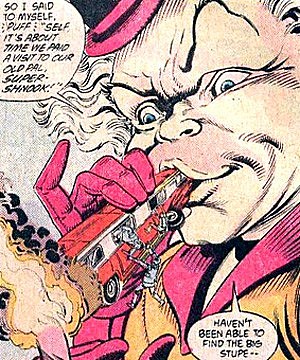 On the surface, it's a pretty ridiculous display of power from Mxyzptlk, but when I was six, it was essentially Roger Stern, Tom Peyer and Paris Cullins managed to combine my fear of dying in a car crash, my fear of falling from a great height, and my fear of being burned alive, and then added a gigantic freaky clown man.

That thing still gives me the jibblies, and the crazy thing is it's probably the least scary thing he does in the book. I mean, two pages later... 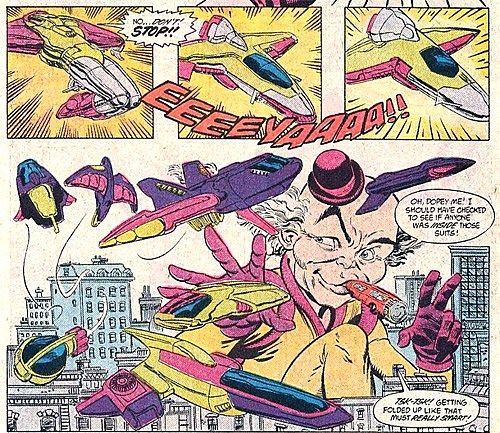 ...he turns a bunch of armor-clad LexCorp soldiers into Transformers, leaving Young Chris Sims to vividly imagine their broken, mangled bodies being toyed with by some bowler-hatted Lovecraftian horror. If I made it past the bus scene, that was the one that inevitably did it.

Mock me if you want, but I swear I don't think I ever actually made it to the end of that issue. Somebody let me know how Lex Luthor's Hostile Takeover turned out, okay?

And finally, perhaps the most important spooooooky question of the season:

Q: Which super-heroes/villains would give out which candies to trick-or-treaters? -- dino_rider

A: Reed Richards gives kids dental floss and travel-sized toothbrushes, but Ben and Johnny hand out S'mores as the kids leave the Baxter Building.

Dr. Doom gives out "Doomapples," Latverian Granny Smiths dipped in homemade caramel with candy-corn eyes, noses and smiles stuck on. Unfortunately, nobody ever comes to get them because his driveway is actually a treacherous mountain path lined with killer robots. Doom hates Halloween.

Spider-Man gives out full-sized candy bars, just like Uncle Ben used to, even though he has to hock his microscope to buy 'em. He also says "Fun-sized? What's 'fun' about less candy?" at least eight times every Halloween.

Iron Man used to go for those fancy handmade chocolates with the delicious rum centers, but these days he just leaves a bucket of cell phones on the front porch with a "TAKE ONE" sign stuck in there.

The Joker gives out razor blades with tiny apples stuck in the middle.

Thor has been reprimanded on several occasions for offering children flagons of mead and whole roast turkeys.

Professor X gives out those terrible little orange and black things, but when you eat them, he goes into your mind and makes them taste like Ferrero Rocher.

Batman straight up cuts you a check for $600. And Alfred drives you home.