Q: Now that it's ended, what are your thoughts on the whole Amazing Spider-Man: Brand New Day run? -- MarkKirwan

A: For those of you who haven't been keeping up with the adventures of your Friendly Neighborhood Spider-Man, this week's release of Amazing Spider-Man #647 marked the official end of the "Brand New Day" stories, which essentially means that as of next issue, it'll only be coming out twice a month instead of three times, and without the rotating cast of writers.

It's not really a stretch to say that "Brand New Day" was controversial and it certainly had its share of detractors, but the majority of them seemed to be directed less at "BND" and more at the storyline that immediately preceded it, and on that front, I'm totally with 'em. But the end result, and I say this as someone with a documented love of the character, is that for the past two and a half years, "Brand New Day" gave us some of the best Spider-Man stories in decades.

I'll admit that at the start, I was extremely skeptical. It was, after all, spinning out of "One More Day," a story that doesn't have a lick of good in it. Everybody and their brother on the Comics Internet has thrashed that thing to the point where it barely even needs to be addressed at this point, but the fact of the matter is that it was a heavy-handed retcon that that was predicated on something completely antithetical to the spirit of the character.

Even worse, the whole thing -- Both "One More" and "Brand New" -- seemed to be motivated by the most pervasive enemy of good storytelling in comics today, nostalgia. The desire as I understood it back then was to return Spider-Man to the heights the character had seen in the '70s, and while those stories were great, I was worried that it was going to end up in the same self-indulgent repetition that often comes with alleged returns to greatness.

With Spider-Man, though, the creators understood that it wasn't just the characters in those stories that made them great, but how they were told. Instead of falling into the nostalgia trap, the creators and editors of Amazing Spider-Man got it in ways that other retcons completely missed.

So whether or not the initial motivation was to just get rid of Mary Jane and the marriage, "Brand New Day" really did give the books a new sense of energy and forward momentum. It's ironic, considering that the whole thing came as a result of an event that was criticized for wiping away years of character development, but for the first time in a long time, Spider-Man stories felt like they had some forward momentum to them. 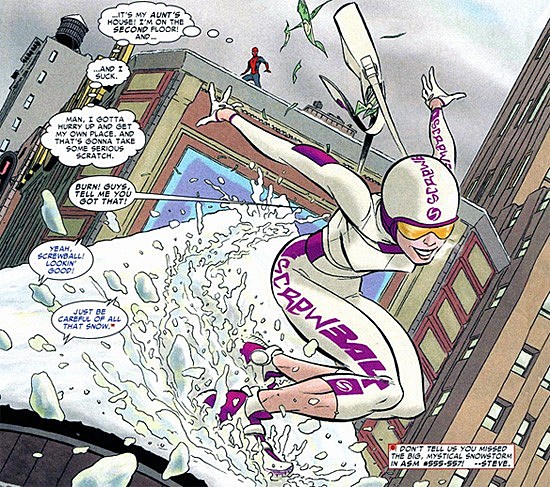 And the creators delivered on that promise. Instead of just pitting Spider-Man against the villains we've all seen before, they created new characters for him to fight, with virtually every arc for the first year of "BND" offering him a new challenge. And not only were there characters that were clearly created to be fixtures for the character (like Mr. Negative) and villains that had defined character arcs and mysteries within the story (Menace), there were also great incidental characters like Screwball added not just to Spider-Man stories, but to the Marvel Universe.

Because really, Overdrive isn't really a villain that anybody thinks is going to beat Spider-Man... 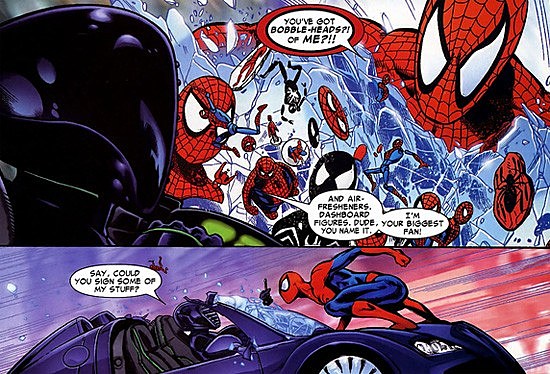 ...but he's got neat powers, he makes for an interesting and adaptable plot device, and it's going to be awesome when he inevitably shows up in a book like Thunderbolts.

And even when Spider-Man's established foes did show up, it wasn't in the way we've seen before. It wasn't just that the stakes of the fights themselves were raised, which is a pretty artificial storytelling construct that a lot of creators rely on to make things seem bigger than they are, when any hack can just write a story a bomb big enough to blow up the world that your super-powers are useless against. It's also that the characters were treated differently. Over the course of "The Gauntlet," none of the "classic" villains were left at their typical status quo, and in the process, we got truly amazing stories like "Keemia's Castle" and "Shed," which are easily some of the best Spider-Man stories since at least Kurt Busiek's run on Untold Tales.

"Shed" specifically -- which both David Uzumeri and I have written about elsewhere -- is easy the best Lizard story of all time, and while that probably wouldn't be a difficult title to come by, it's actually pretty amazing. Much like "One More Day" as a whole, it takes something that at first glance sounds like it'd be awful -- in this case a darker, grimmer, revamped Lizard who commits a truly atrocious act in the story -- and does it with such a level of craftsmanship that it lives up to the title's promise of being amazing. 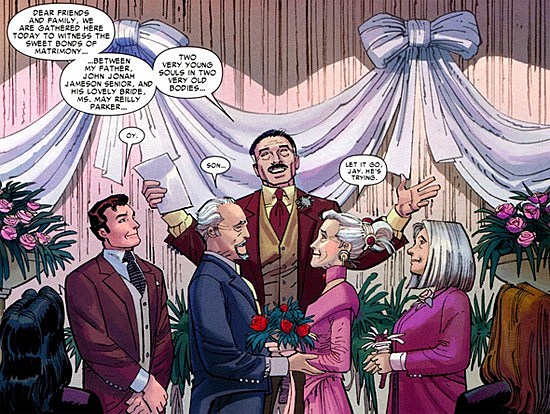 Even the supporting cast was revitalized and moved forward. New characters like Dexter Bennett, Carlie Cooper and Jay Jameson (Senior), new roles and plots for characters like J. Jonah Jameson (Junior) and Harry Osborn, it all came together recapture the super-powered soap operatic nature that's always been one of the book's most appealing points.

But more than anything else, the idea of change as the only constant, the idea of creation rather than stagnation is what captures the feeling of those Spider-Man stories we all love from the past. There's a a feeling to it -- helped out in no small part by the fact that three issues were coming out every month -- that there's more going on for this character than just a punch-out with the villain of the month.

Of course, that also has a lot to do with the sheer amount of talent behind this book. I'm pretty sure that there was nothing wrong with Spider-Man that writers like Dan Slott and Mark Waid couldn't have fixed without jumping through the hoop that was "One More Day," but the addition of a relatively clean slate didn't hurt matters. I've said before that at this point, Waid could write a compelling super-hero story in his sleep, and Slott's work has proven what everyone who read Spider-Man and the Human Torch already suspected, namely that he's going to go down as one of the best Spider-Man writers of all time. And while they're the standouts, they're not the only ones doing excellent work; guys like Zeb Wells and Fred Van Lente just killed it every time they got to bat. 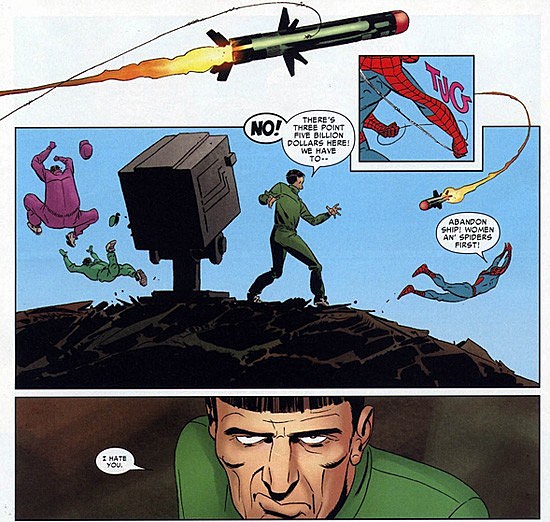 The art, too, was phenomenal. Again, the standouts are obvious -- I'd put Marcos Martin and Javier Pulido's work up against anyone from Ditko and Romita on down -- but this is an era for Spider-Man that boasted Phil Jiminez, John Romita Jr., Emma Rios, Chris Bachalo, Max Fiumara, and Paolo Rivera, who drew what might be my favorite Spider-Man fight scene ever, and more. That's the best roster of artist any comic's had in the past decade. Even the lettering -- particularly Joe Caramagna's work on "Shed" -- has been notably awesome.

Which isn't to say that it's all been perfect. With 101 issues from diverse creative teams, there are bound to be a few rotten apples in the bunch, and "Brand New Day" had its share. I could've lived a perfectly happy life without ever seeing Freak, for example, and the updating of Spider-Man and the Black Cat's relationship to include them actually having sex while he kept his mask on to keep her from knowing who he was struck me as a shade creepier than it ought to have been.

And then, of course, there was "One Moment In Time," in which the events of "One More Day" were revisited and explained. As Evie and Aaron of the Awesomed By Comics podcast put it, this was essentially like bringing up an argument you had with your significant other two years ago because you still think you're right -- telling us about a devil bird and assuring us that only married people can have children accomplishes nothing.

But in the end, the high points far outrank the lows and you really have to hand it to editor Steven Wacker for putting it all together. It's a truly monumental achievement.

Mostly because it brought us Anti-Venom, who is Venom except in reverse and he wants to help Spider-Man by eating his radiation, and that is hilarious.

Q: I haven't read Batman since RIP, but I think Batman Incorporated sounds kick-to-the-face awesome. What should I read to catch up? -- Greg4cr

A: All you need are the Morrison issues, and those are easy to grab: The first hardcover of Batman and Robin has been out for a while, and the second just hit this week. You'll also be wanting to jump on The Return of Bruce Wayne and Batman #700, 701, and 702, but those won't be too hard to track down at your local shop or online at the links above.

Q: Did you read Superman: Earth One & if so, is it that much different than the other origins we have gotten since 1986? -- MushroomJones

A: Yes I did, and yes it is, in that most other Superman origins aren't terrible.

Q: You have to go back in time 150 years, and you can bring 2 non-Batman fictional characters. Who do you bring? What do you do? -- LiterateKnits

A: First order of business would be to take along a time traveler, because really, there is no way I want to stick around 1860 for any longer than necessary. I'm tempted to go with the Doctor, but his penchant for getting wrapped up in wacky adventures would undoubtedly delay my return journey to a time of indoor plumbing and Krispy Kreme donuts, so I'm going to with Ultra Boy from the Legion of Super-Heroes, under the condition that he also brings a Time Bubble.

Q: What's your favorite version of the Batmobile? -- deantrippe

A: The one that flies. 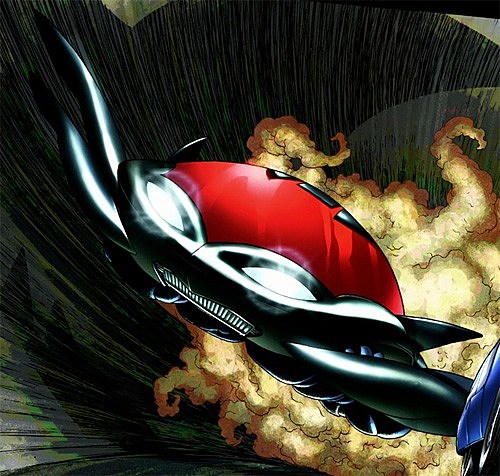 Special Update Section: In last week's Extra-Spooky Halloween Edition of Ask Chris, I was asked to create a Frankenstein's Monster made of dead super-heroes. To that end, I chose the head (and helmet) of Aztek, the body of the Golden Age Mr. Terrific, the arms of Hitman (right) and Jonah Hex (left), the pelvis of Darkseid, the go-go dancing legs of Gwen Stacy, and Thomas Wayne's moustache. I then ordered asked artists to draw this unstoppable monstrosity.

And I received not one, not two, but three pieces of art! Check 'em out: 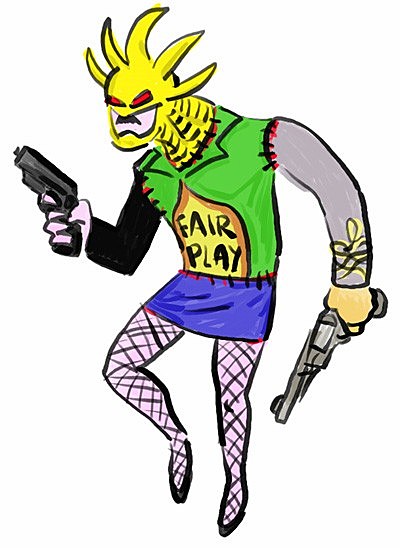 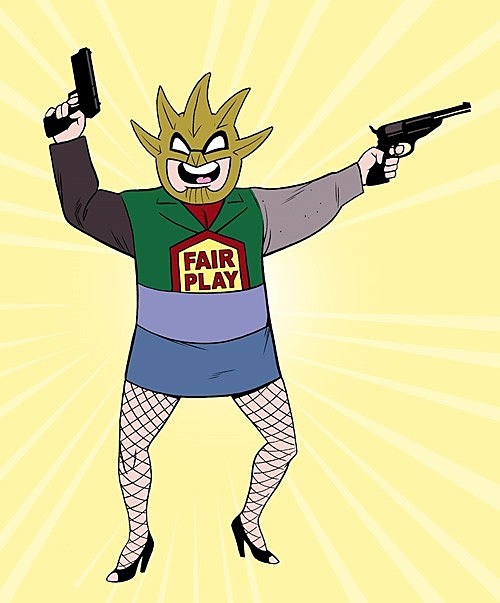 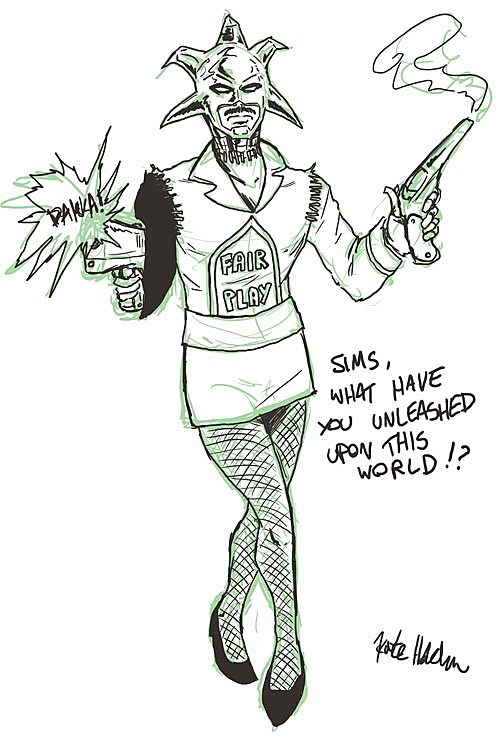 Today, we have learned a lesson. And that is that I clearly need to give you guys homework assignments more often.